‘Stay with me son’: Hilarious moment footy fan placates a shirtless brawler as a Melbourne Storm supporter fights with another man just metres away

An older footy fan has pacified a shirtless brawler from jumping into a fight by holding the punter in his lap and gently lulling him to stay put.

Footage of the hilarious incident at Brisbane’s Suncorp stadium on Friday night was posted to Facebook page Humans of Bankstown over the weekend.

It shows a scuffle breaking out among fans in the grandstand shortly after Melbourne Storm defeated the Brisbane Broncos 46-8.

A Storm fan can be seen launching punches into another man wearing a white shirt.

The man in white quickly overpowers him and begins choking him, as the pair tumble over onto another row of chairs.

‘Cut it out!,’ the woman filming the melee yells, as other spectators trying to pull the men apart.

A man then tries to join the fight from a lower row, throwing a punch before losing balance and falling down to a lower row into an older footy fan’s lap.

The older man then gently restrains the young punter, as he tries to pull himself up to get involved in the brawl.

‘Stay with me son,’ the older man says patting the man on his shoulder.

‘Let me out,’ the fatiguing reveller says.’

‘You just stay with me.’ 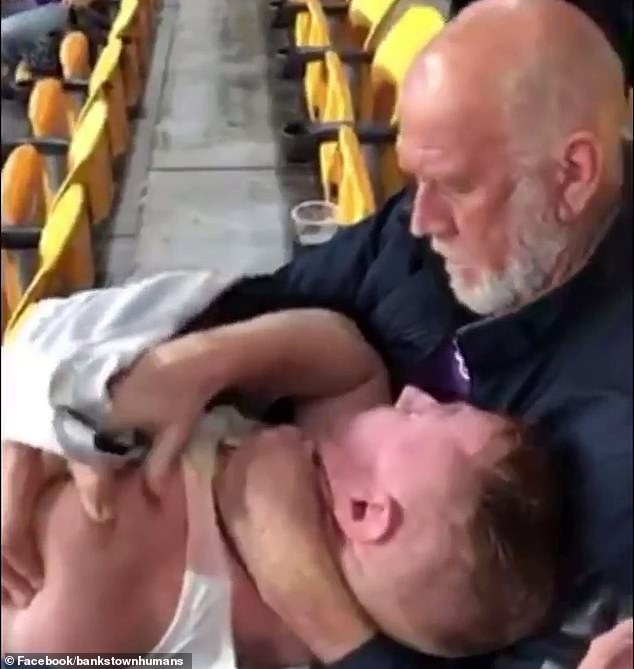 The younger man eventually gives up, relaxing into his position against the older man’s chest.

The humorous video was bombarded with responses, many praising the older man for his response.

‘Someone buy the ol’ man a beer,’ one person wrote.

Another added: ‘Good on him. That guy was too drunk to jump in. Don’t even know where he came from.’

Storm have climbed to the top of the ladder after their victory in round 11 on Friday night.

The Melbourne team will kick off against the Newcastle Knights for round 12 at Suncorp Stadium next Sunday.