Paws and reflect! Hilarious moment father uses his ‘dad voice’ to tell off a bear opening his car door – and the animal promptly closes it

An inquisitive black bear wandered out of the woods in Gatlinburg, Tennessee last week and attempted to get a closer look at a parked car.

The owner of the car was filming the bear from the safety of his cabin but when the bear opened the car door he resorted to his best ‘dad voice’ to scare the bear away.

Footage shows the black bear slinking out of the woods and sniffing at a parked car.

A curious black bear wanders out of the woods in Gatlinburg, Tennessee to take a closer look at a parked car

The bear then stands up on its hind legs and deftly opens the car door using its paws.

Under his breath, the man filming the video says: ‘Oh my gosh.’

He then raises his voice sternly, to use his best ‘dad voice’ and shouts at the bear, saying: ‘Hey! No, don’t do that!’

The startled bear looks over to see who is yelling and releases the car door which slams shut. 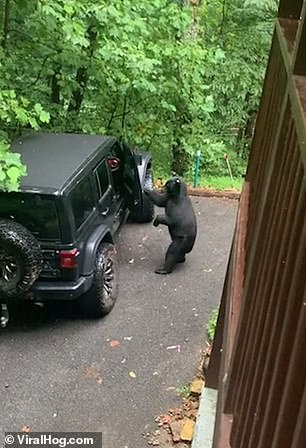 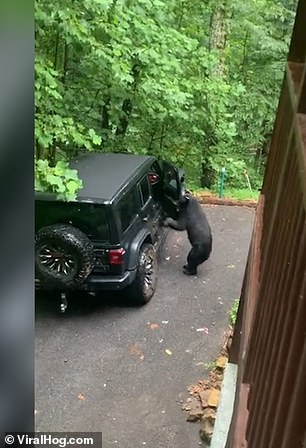 The man laughs in amusement or relief however, it’s not over yet as the curious bear attempts to break in for a second time and opens the car door again.

The man yells ‘Hey!’ again in a strict voice and this time the bear lets the car door go, drops to all fours and wanders back into the woods.

As the bear finally skulks away, the man jokes laughing, ‘Come on man, what’s wrong with you?’ 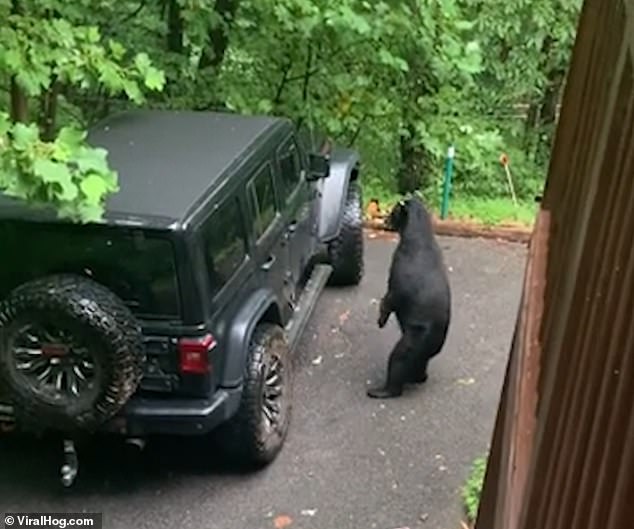 The man filming the video raises his voice sternly to use his best ‘dad voice’ and shouts at the bear, saying: ‘Hey! No, don’t do that!’ which stops the bear in its tracks 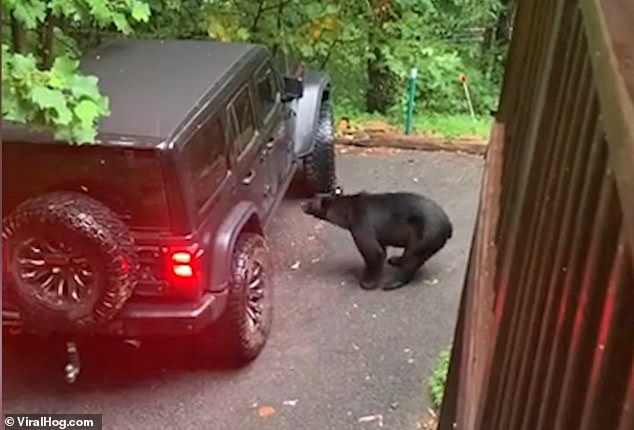 Startled, the black bear drops to all fours and retreats back to the woods as the man laughs in relief

The father-of-three had been staying with his wife in a cabin in the woods of Gatlinburg, Tennessee for a weekend to celebrate his birthday when the incident with the bear took place.

The incident was caught on camera last week on July 23.

The man in the video said: ‘My wife and I were at a cabin for the weekend to celebrate my birthday.

‘We have three young sons, so when a black bear wandered out of the woods and opened my car door, I used what my kids call ‘the dad voice’ to yell at the bear, and he immediately stopped what he was doing and closed my car door for me. Twice.’ 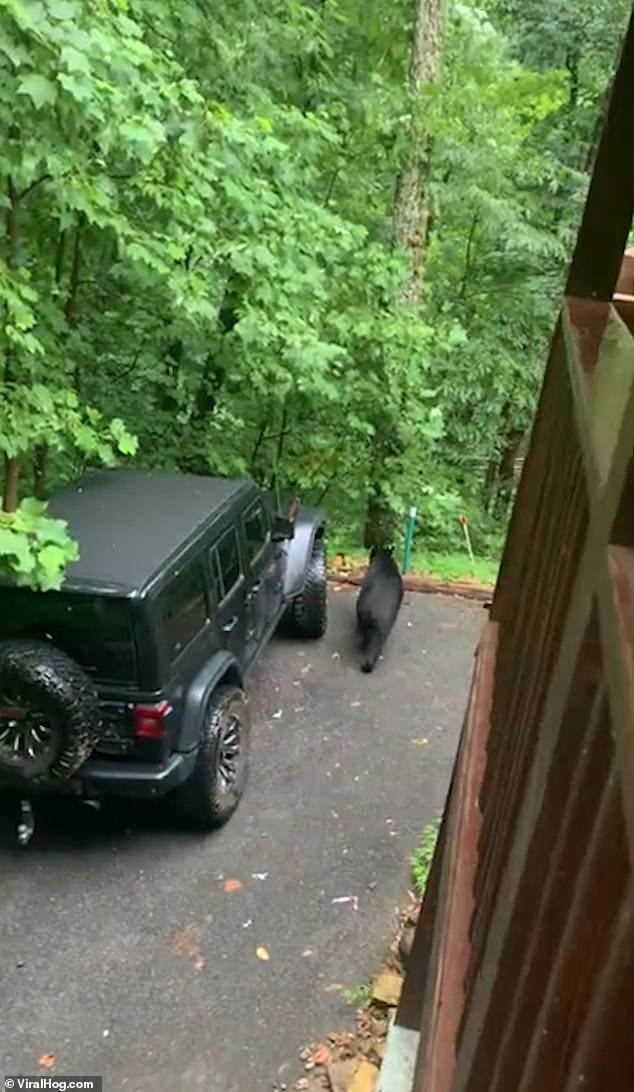 Bears in Tennessee are primarily black bears and there are approximately 1,500 bears living in the area

Bears in Tennessee are primarily black with a long, straight, brown snout but in other parts of America bears can be black, brown and white.

The footage was filmed near the Great Smoky Mountains National Park which has a population of roughly 1,500 bears.

A healthy male Tennessee black bear can be between four to seven feet long and weigh as much as 500lbs in the winter months.

Black bears are very curious animals and will often stand on their hind legs to get a better view or a better sense of hearing and smell.