Four friends ended up stuck on a boat trailer after slipping on a slime-covered ramp.

Mobile phones captured the moment one after another they slid into the trap while wearing their evening finery and, in one case, carrying a handbag.

The disaster happened after their boat detached from the trailer too early in Tampa, Florida, and started floating away.

When one went to retrieve it and got stuck others tried to help, but quickly ended up in the same predicament.

The boat was saved, however. Footage shows it being driven away by someone as the friend’s struggle to get away from the trailer. 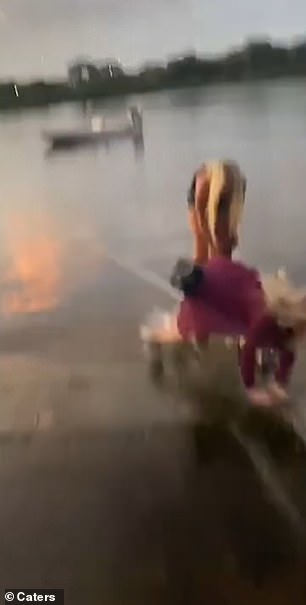 The friends tumbled down the slippery slope one by one and ended up stranded on the trailer. They first started going down after their boat launched too early in Tampa, Florida

The 48-second video shows the girls giggling as they tumble down the slope into the murky waters.

One can be heard exclaiming: ‘Oh my god!’

And a second jokes as they remain stranded: ‘We’re not making it to dinner’.

The clip shows one friend sustained a cut to their toe and a grazed knee.

The video was uploaded to social media by Claire Sigrist, to show the hilarious evening.

The friends were pictured stranded on the boat trailer and giggling. One joked they wouldn’t be able to get to dinner on time