‘He scared the life out of me’: Hilarious moment a ‘serial pest’ pranks a TV news reporter and interrupts a live cross outside court

A TV reporter’s live cross outside court has been interrupted by a hilarious ‘serial pest’.

Nine News reporter Billy Hogan was edging close to his 3.30pm deadline, with one final piece to camera to file outside court in Albury, New South Wales before finishing work for the day.

‘It was about 3.20, and we were trying to get it done quickly,’ Hogan told Melbourne’s 3AW Breakfast on Tuesday.

Hogan settled himself and started his lines, before muffling his words and sighing in frustration.

‘Some days are better than others, this was about take seven,’ he said.

His take may not have mattered anyway, as moments after his blunder, a local character appeared from the rear of the police station and joined Hogan in the spotlight.

‘I’m looking at the camera and the next thing he’s (the cameraman) looking out of the viewfinder and looks past me and I turned to the right and there he was,’ Hogan said.

‘He absolutely scared the life out of me.’

The man, wearing an AC/DC t-shirt and aviators, slotted straight into the frame, with Hogan jumping up in fright. 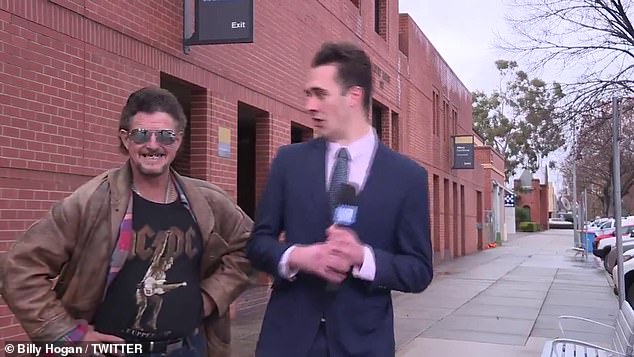 The man slots into frame, with Hogan jumping up in fright (pictured)

‘It was quite a funny time,’ Hogan said.

The man was known to the news crew from hanging around the court, whether he has a case or not.

‘He’s a serial pest. He’s always there for some kind of reason,’ Hogan said.

But his slot on the news bulletin wasn’t all the offender was after, complimenting Mr Hogan on his hair and asking where he gets it done, with Hogan replying ‘Dude Hut’.

‘I have only been to Dude Hut once because I’ve only just recently moved to the area, but I hope I’m a loyal customer,’ he said.

The video concludes with the man being escorted off the road by a policeman and back in towards the court house.

‘He must have said something to the detective because then he’s (the detective) pulled him down the alleyway and said ‘hey mate pull your head in leave him alone,’ Hogan said.

‘Then he’s walked past us, given us a dirty look, chucked his aviators on, and gone straight across the road into Lowes.’

Hogan said the man was ‘harmless’ but wondered about how receptive he’ll be next time he sees him at the court house.

‘I don’t think he’ll be as friendly next time.’ 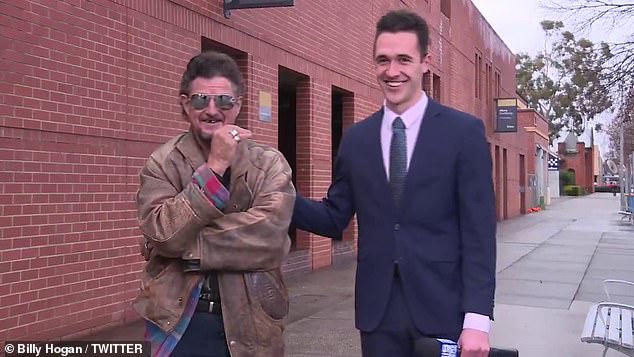