Fool’s gold! Hilarious snaps reveal people who thought they were being clever with Photoshop and filters – with VERY unconvincing results

Many of are in the habit of filtering pictures to look our best on social media, with some even using editing apps to do a bit of nipping and tucking, but these pitcures are a stark warning of how ridiculous you look by taking it too far.

Bored Panda has collected a selection of hilarious examples from around the world that prove exactly why you should approach any photo tweaks with caution.

Among the influencers who have taken things a step too far was one whose waist was so tiny in her gym snap it looked as if she couldn’t possibly have any internal organs.

Another tried to creat the illusion of cuddling up to a giraffe with the creature’s next slung unconvincingly over her shoulder.

Meanwhile, a blogger edited her beach snap to enhance her curves, but made the water in the background look as if a tsunami was looming.

Having a giraffe? Bored Panda has collected a selection of hilarious examples of ridiculous photo editing from around the world, including this Instagram user who created the illusion of a giraffe hanging over her shoulder – although its body appeared to be missing 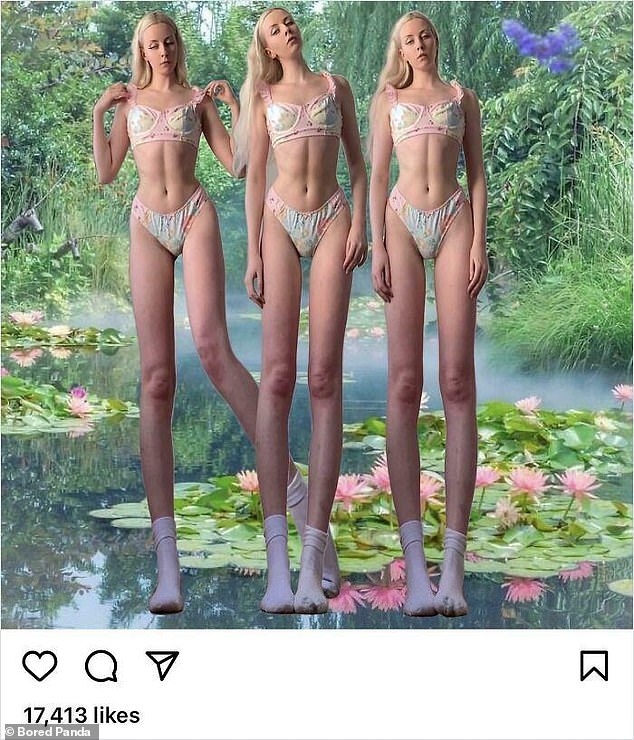 Seems leg-it! An influencer racked up more than 17,000 likes with what may well have been a tall tale 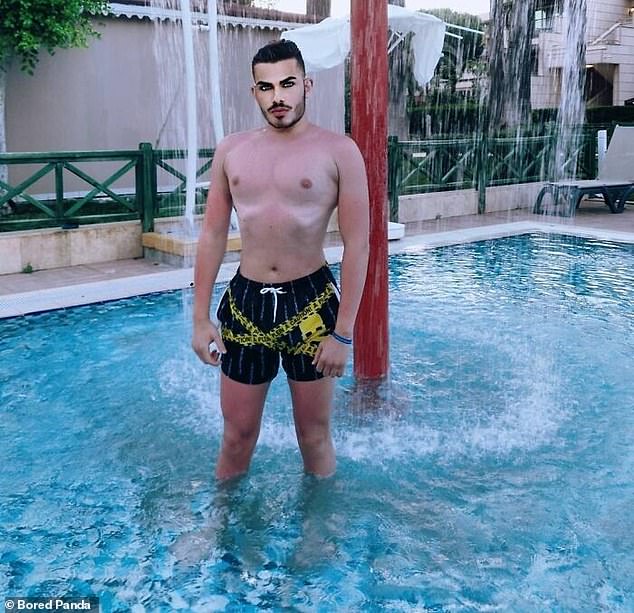 The Sims walk among us! One man’s holiday photo looked rather unrealistic, thanks so his face that appeared like a msk and strange lighter coloured skin around the ribs where tweaks were apparently made to the photo 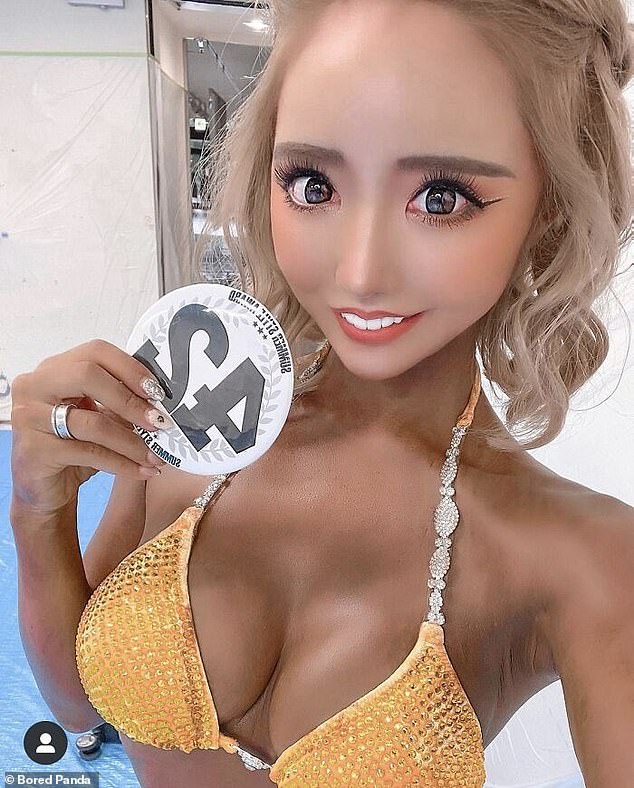 All dolled up! A bikini fitness contestant is undoubtedly in great shape, but her eyes look unrealistically huge 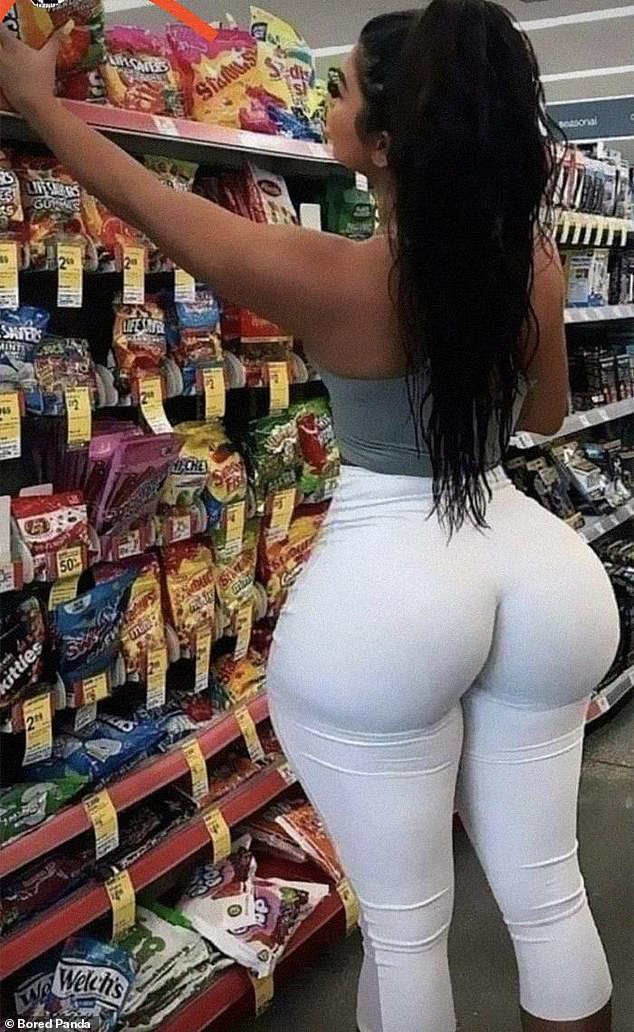 Get to the bottom of it! This woman from the US with an impossibly tiny waist and curvy posterior potentially used a bit of creative licence to look more like Kim Kardashian 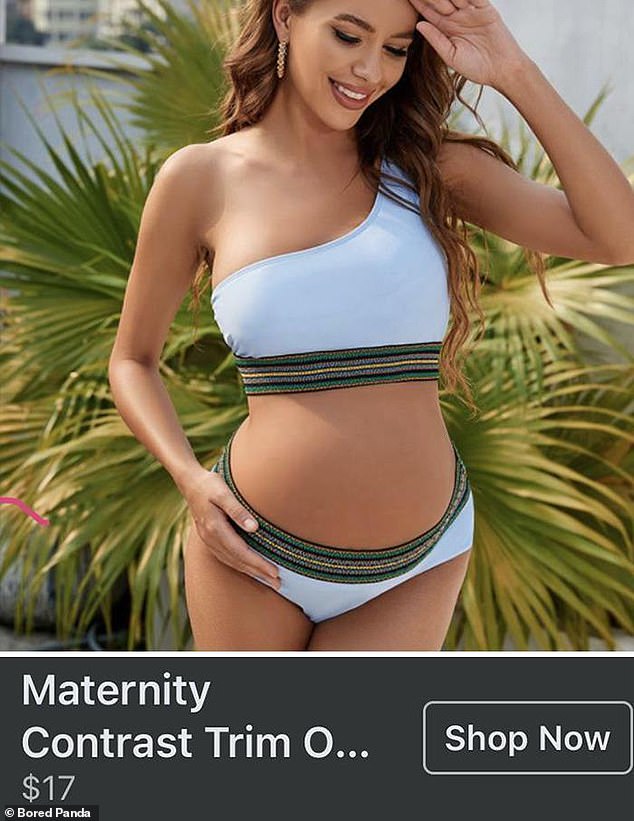 Couldn’t they just hire a pregnant model? This woman’s baby bump on a US shopping website was not fooling anyone 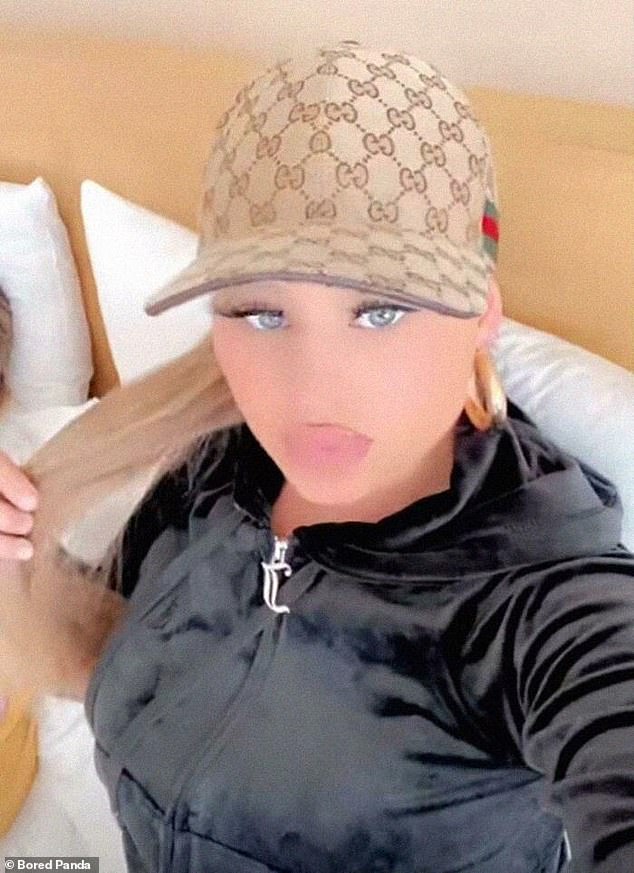 Who nose what’s happened here? This girl’s selfie was so heavily filtered she appeared to be missing a crucial facial feature 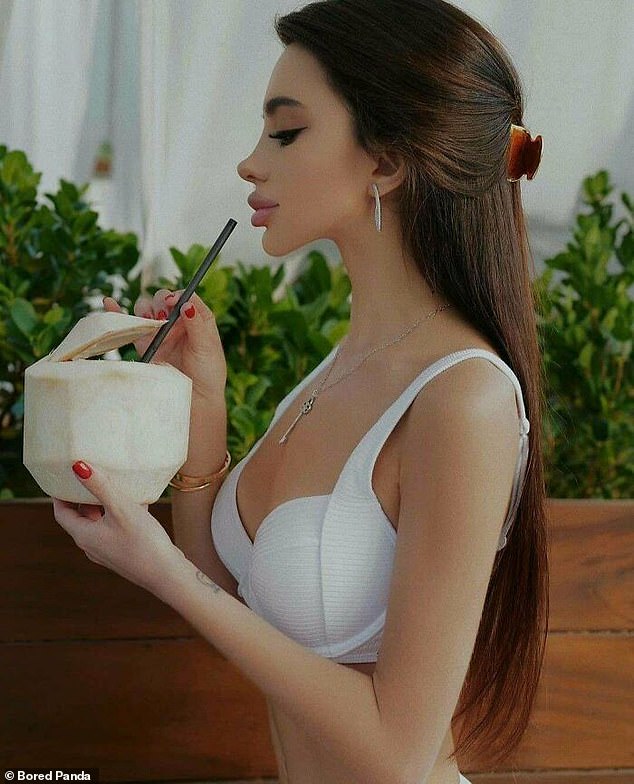 Takie it on the chin! Was PhotoShop wizardry used to give this woman a more sculted jaw line in her holiday bikini snap? 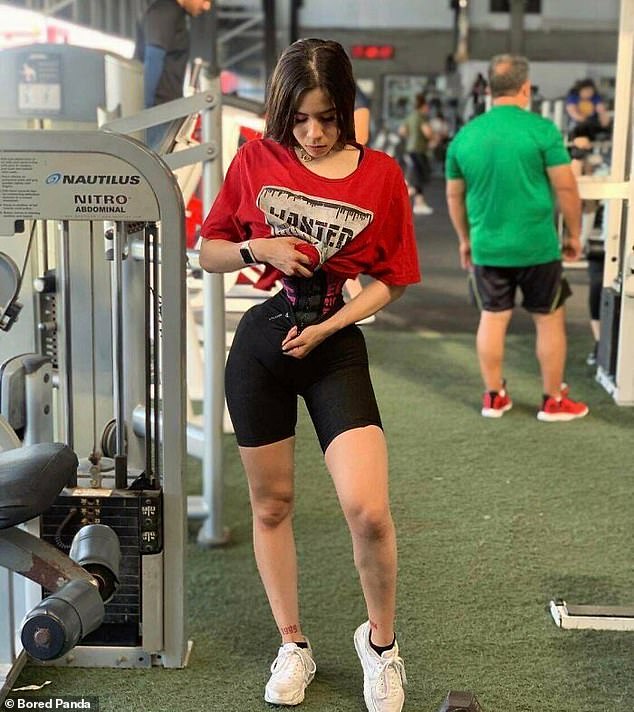 No pain, no gain! But no matter how many hours you spend at the gym, it’s highly unlikely you could sculpt your waist to such tiny proportions 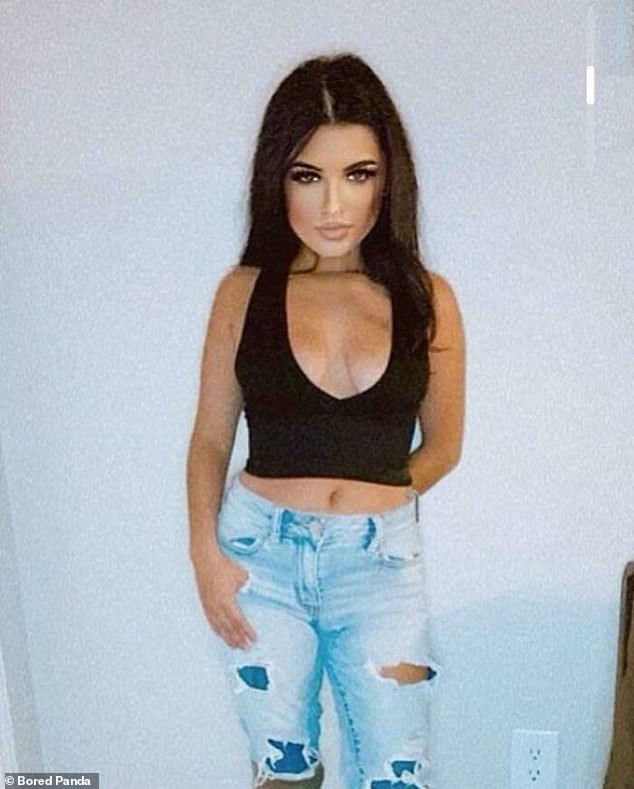 Head’s up! While this woman’s body appeared perfectly normal, the disproportionate size of her face seemed to give the game away 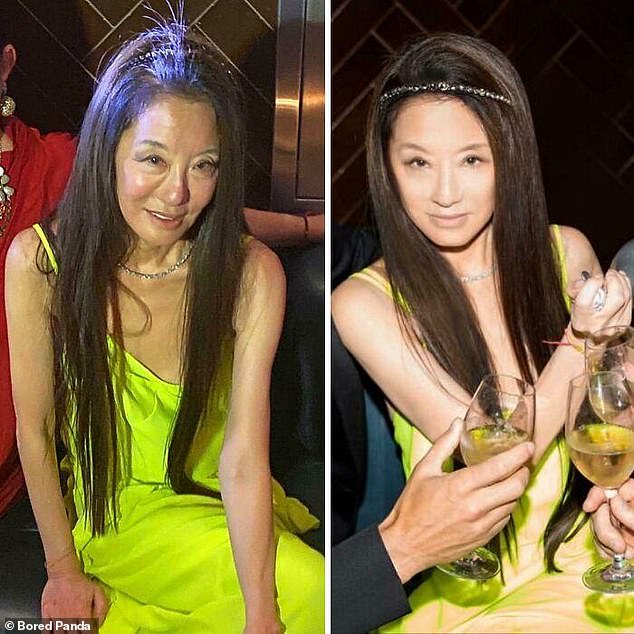 Vera Wang looked fabulous at her 72nd birthday party, although some were quick to point out on the Chinese version of TikTok, Douyin, the difference between these two snaps taken on the same night 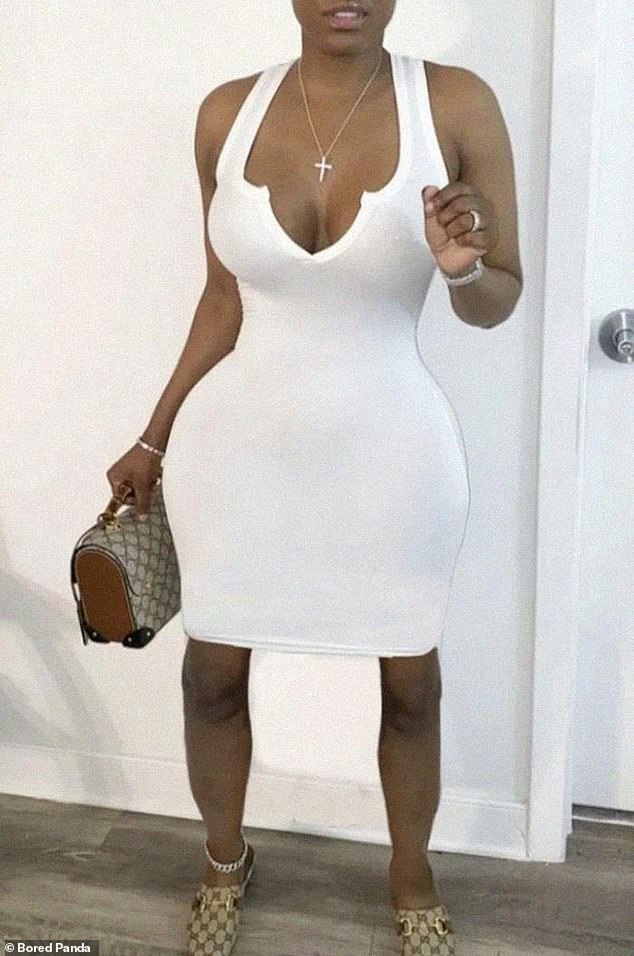 Hips don’t lie! Nothing wrong with the top of this photo, but the very strange wide-legged stance gives it away that something has gone askew

Watch out! This influencer who seemingly edited their snap to ehance their curves made it look like there was a tsunami looming in the background 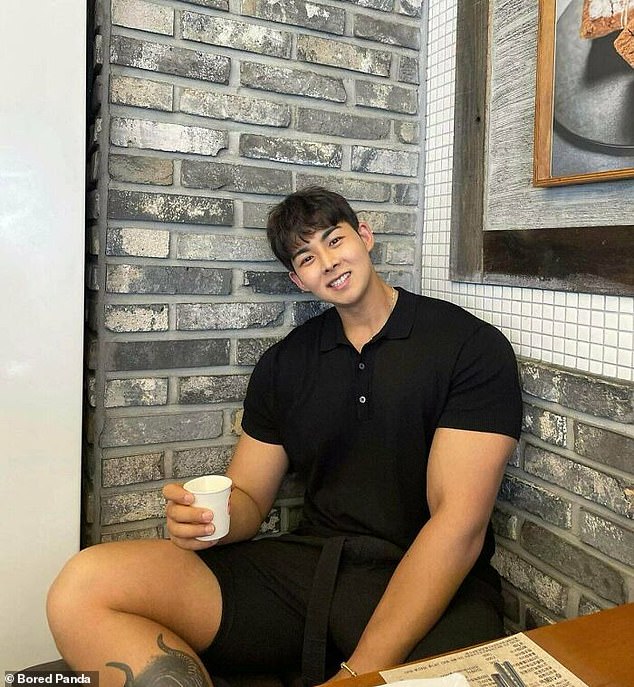 Head’s up! Something unusual seems to be going on with this man’s proportions, but it’s not clear if he made his head smaller or his body bigger