Nobody’s buying it! Hilarious social media posts reveal some VERY tall tales – including a five-year-old who stopped an armed bank robbery to a man who claims he unknowingly lived next door to his pen pal for 30 years

Most people present the best version of themselves on social media, which may involve a bit of creative licence, but some take it a step too far to try to grab attention online with tales that stretch the boundaries of credibility.

Myhealthgazette.com has rounded up some of the funnisest examples from around the world, detailing acts of heroism, profound encounters with strangers and displays of talent so incredible that it’s hard to believe they really happened.

A common theme is students who claim that they questioned the teacher who allowed them to take over and teach the class, resulting in rapt attention from fellow pupils and full marks all around on the next exam.

Another is proud parents who claim that their very young child has pulled off a magnificent act of bravery or cunning, including one who said their four-year-old faked a toilet emergency to get them out of a speeding ticket.

Elsewhere, a Facebook user got a short shrift for claiming he’d been writing to his pen pal for 30 years without realising they lived next door to each other – apparently not noticing the address.

Addressing the issue: A British social media user was caught out after claiming they were living next door to their pen pal of 30 years without realising 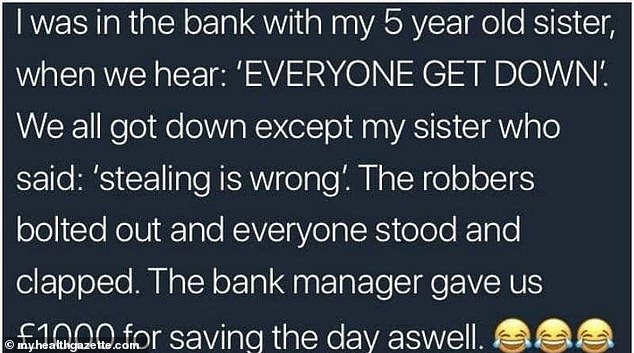 Hold up! This British social media user claimed that their sister, 5, managed to halt armed robbers in their tracks with the power of words, and that a high street bank happily handed them £1,000 in cash as a thank you 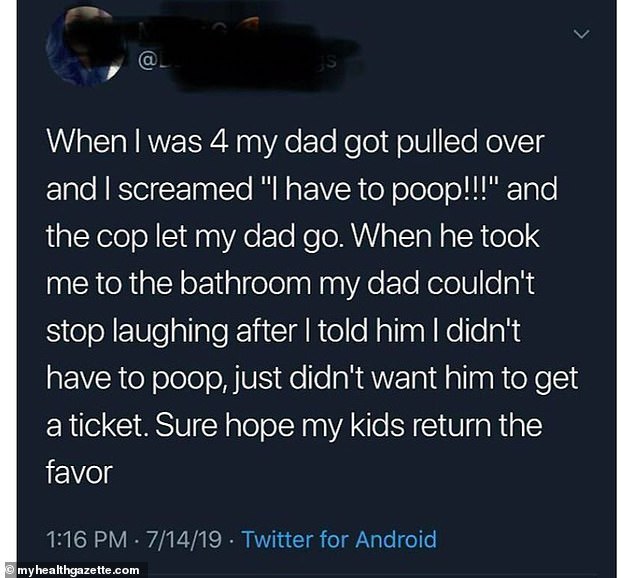 Road to hell? Nobody was buying this man’s tale of how he saved his dad from a parking ticket with an act of great cunning when he was just four-years-old 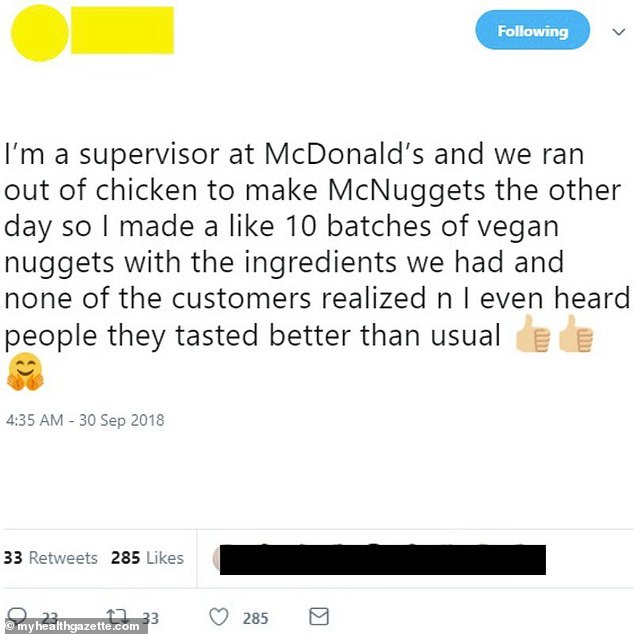 Not lovin’ it! McDonald’s is known for many things, but having the raw ingredients lying around to whip up new dishes is not one of them 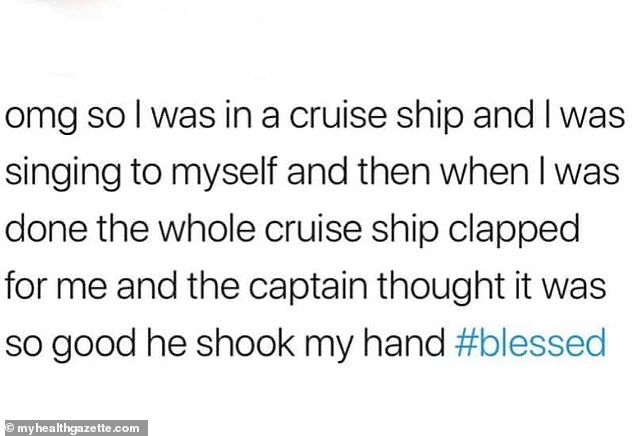 An ocean of lies? One social media user claimed they put on such an impressive singing performance during their cruise that they won rapturous applause from the entire ship. The trouble is that the same post exists thousands of times over with varying details 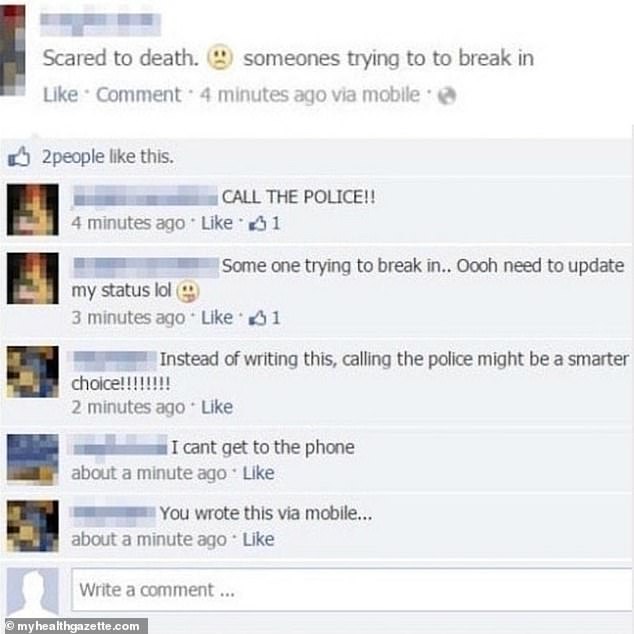 That’s phone-y! A British Facebook user’s claim they were about to be burgled was rubbished by followers, who pointed out that they should be using their mobile to call the police 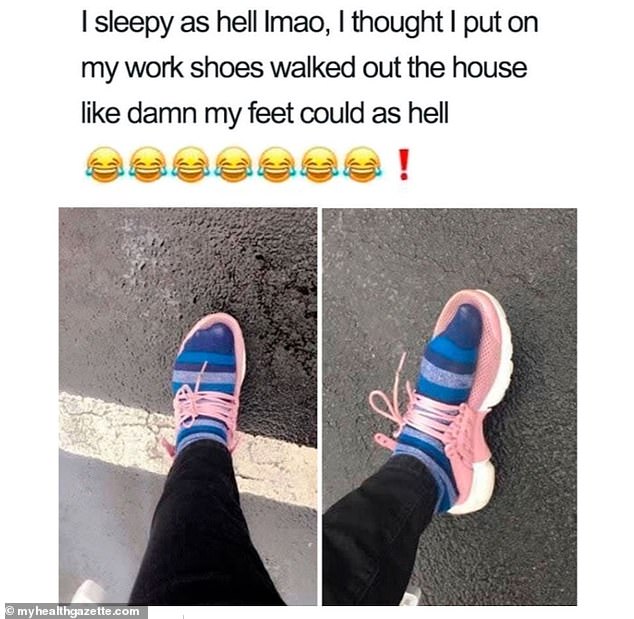 Putting your foot in it! This woman’s claim that she managed to tie her shoelaces around her foot instead of putting her trainers on properly stretched the bounds of credibility 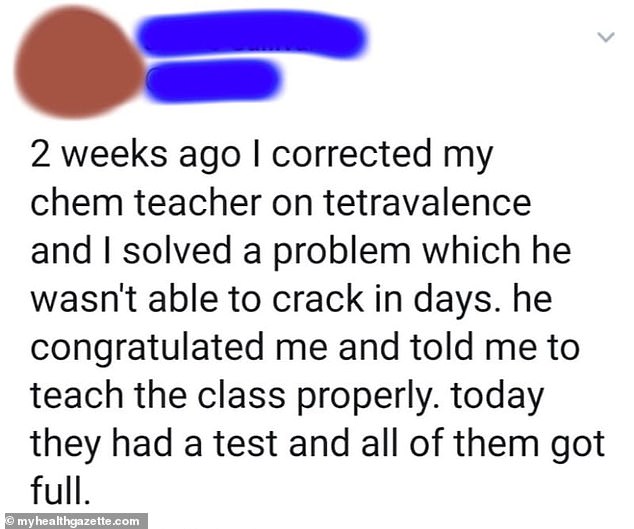 Chemical reaction! The idea that this student outsmarted their science teacher is highly unlikely 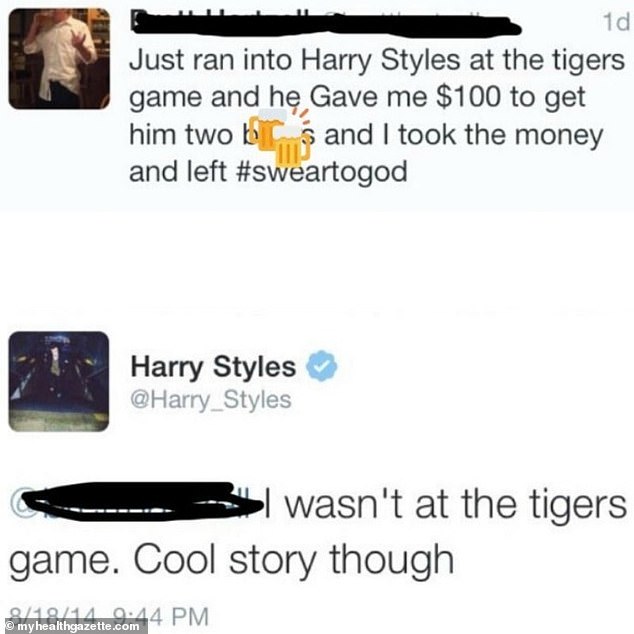 No direction! A Twitter user from the US was left red-faced when Harry Styles himself jumped in to rubbish his story about their non-existent meeting 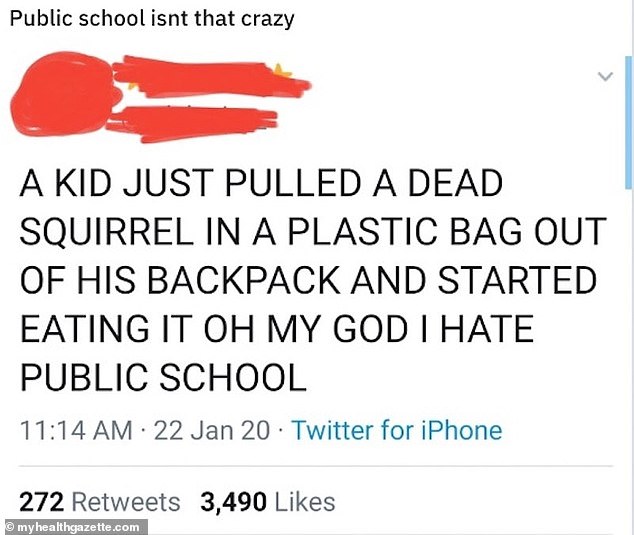 Furry unlikely! While strange things to happen at posh schools, the thought of someone casually eating roadkill does seem a little far fetched 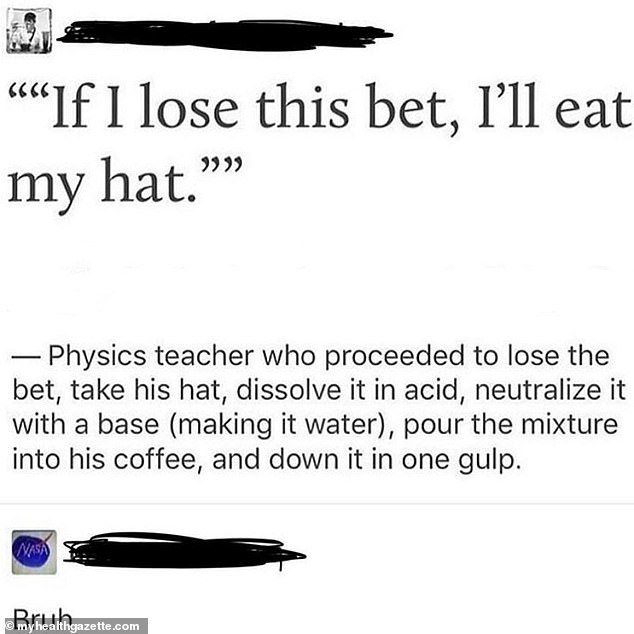 Urban legend! Let’s hope for the sake of the physics teacher, they did not really attempt to do this, plus the fact it’s not a chemistry teacher gives the game away 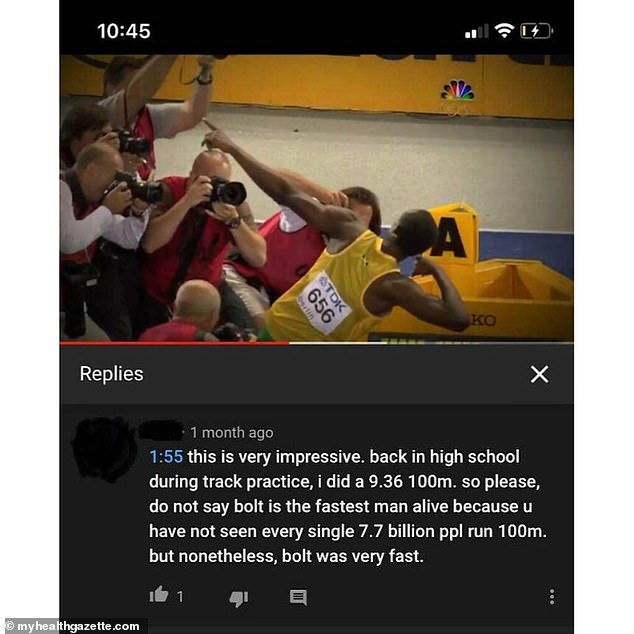 Not the world’s fastest man! If only Usain Bolt knew that his record had been beaten by an amateur athlete from the US in high school, if not many other people 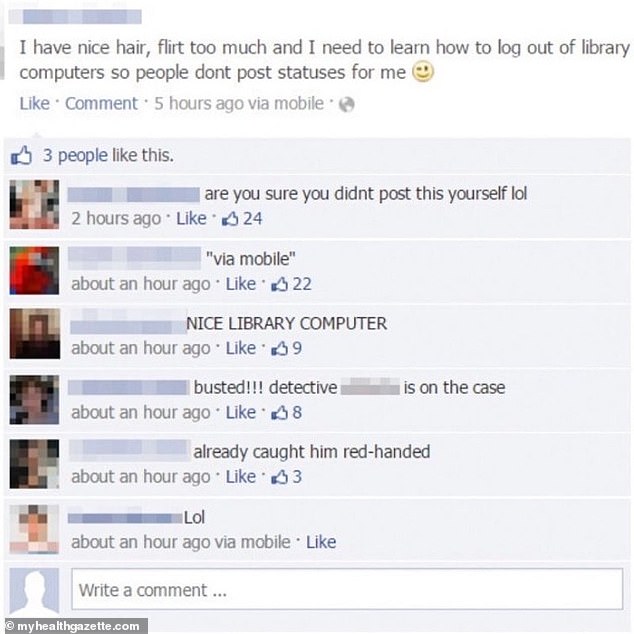 The jig is up! A woman who tried to pretend someone had posted on her Facebook when she stayed logged into a library computer gave the game away by writing it on her mobile 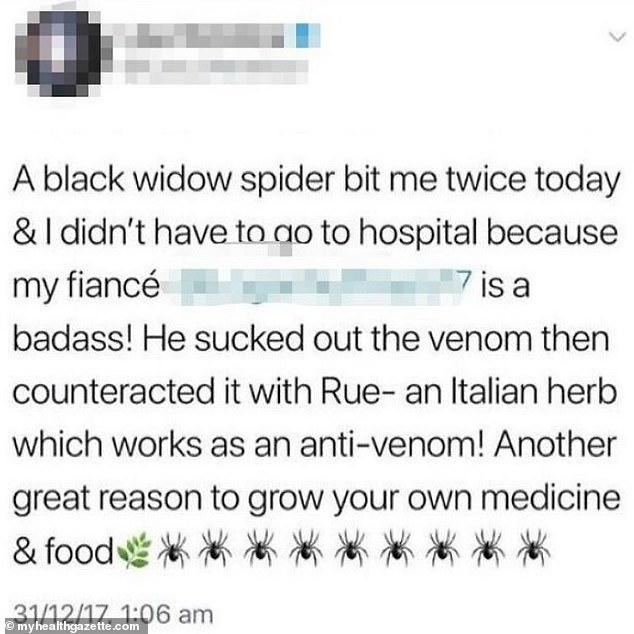 Don’t try this at home! A woman claimed her fiancé saved her from venom poisoning with nothing but his lips and some Italian herbs 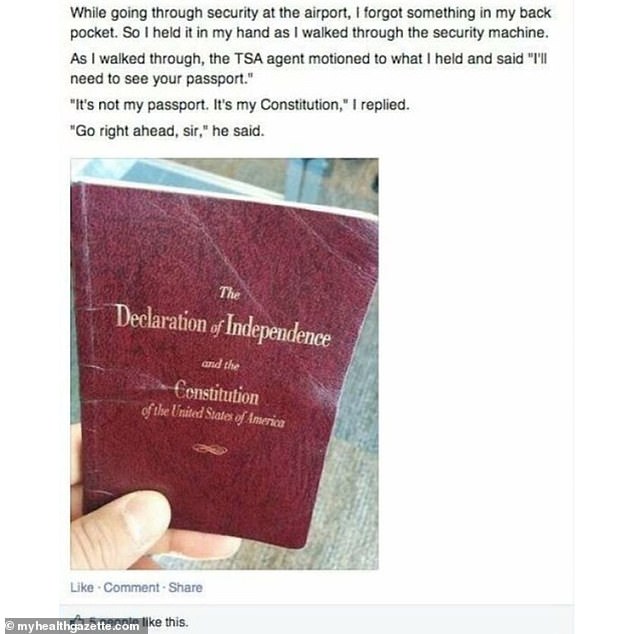 A tale that doesn’t travel: It seems higly unlikely this US passenger managed to get very far with no passport on his person 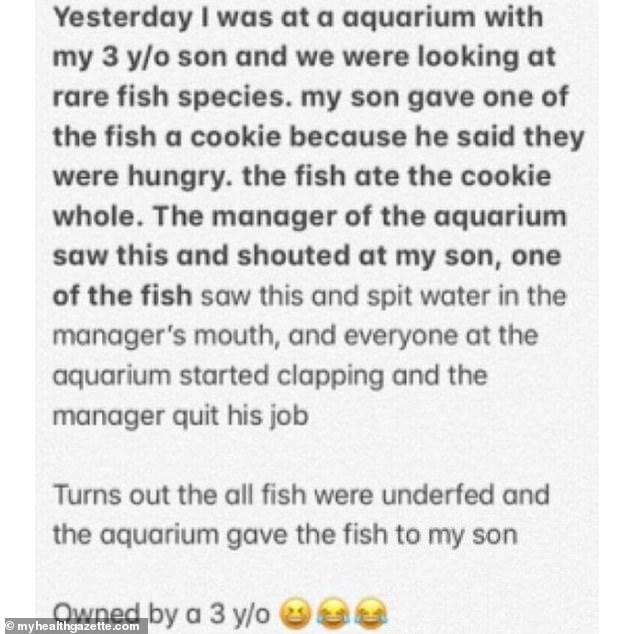 Something fishy? This parent’s story about their three-year-old and a startlingly intelligent fish turning on the manager of an aquarium is straight out of a Disney movie 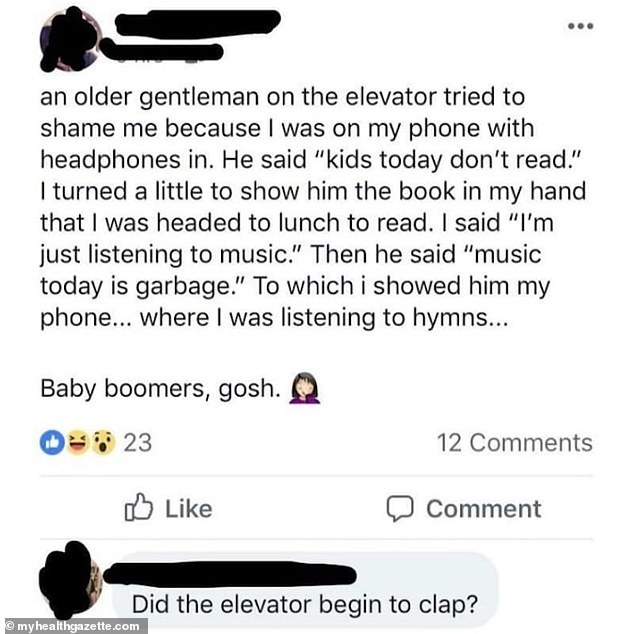 Gospel truth! People were cynical about this American Facebook user’s tale of their encounter in a lift