Italian food is one of the most beloved cuisines in the world, with top chefs training for decades to perfect the craft of making traditional dishes.

But when the traditional food isn’t made to classic standards, Italians are less than happy.

From pineapple on pizza to tinned spaghetti and a fried chicken pizza, a hilarious Twitter account has captured the moments Italians online have discovered  some not-so-classical cuisine.

Racking up nearly 76,000 followers for the funny screenshots, the account @ItalianComments, has made posts including one saying you can still get the death penalty in Italy for making ‘Pizzaghetti’ while another said an Italian grandmother dies every time a recipe is changed.

Here FEMAIL shares the funniest posts, from Heinz spaghetti hoops being branded a crime to cappuccino served in a bell pepper. 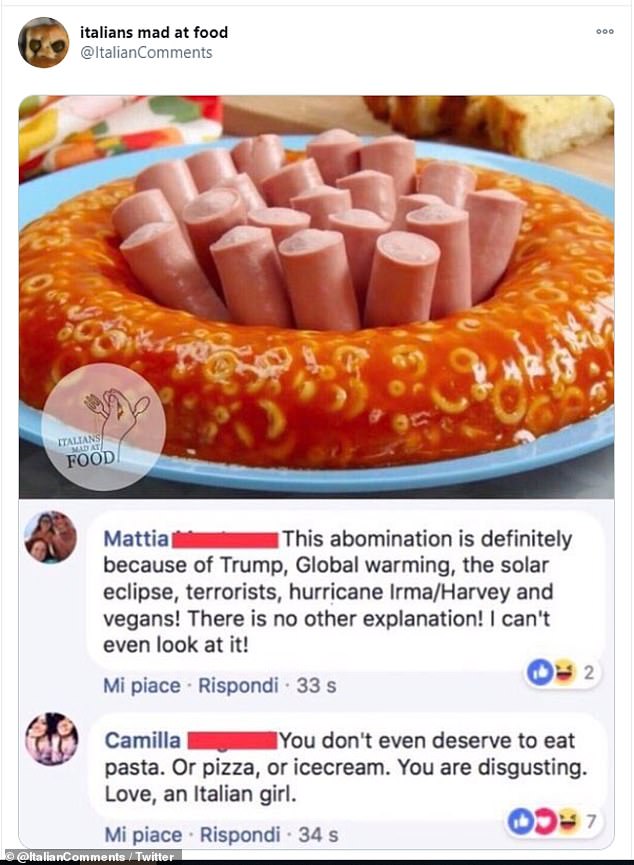 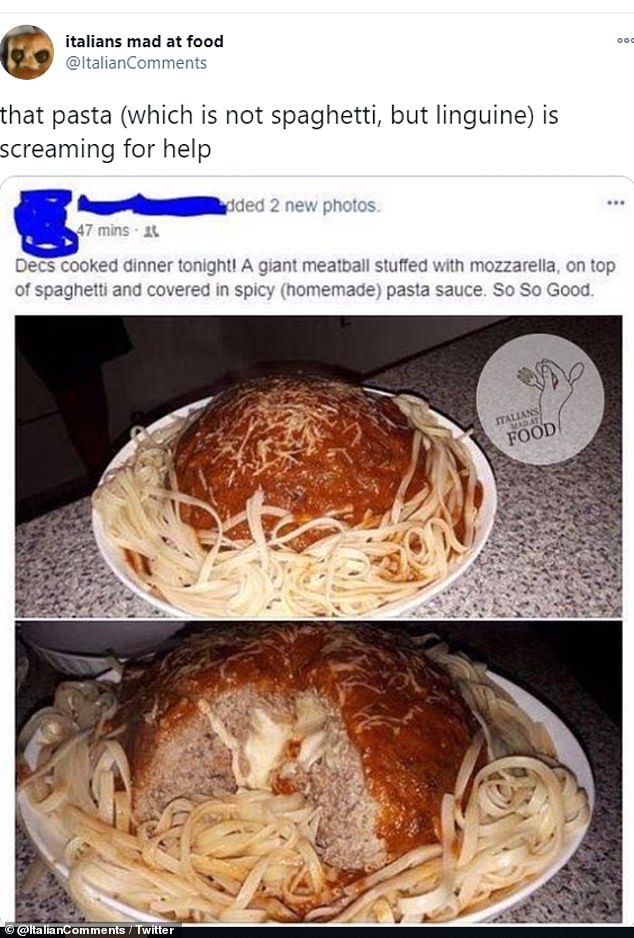 Screaming for help! One Italian said that the linguine was in need of help after seeing a picture of a giant meatball 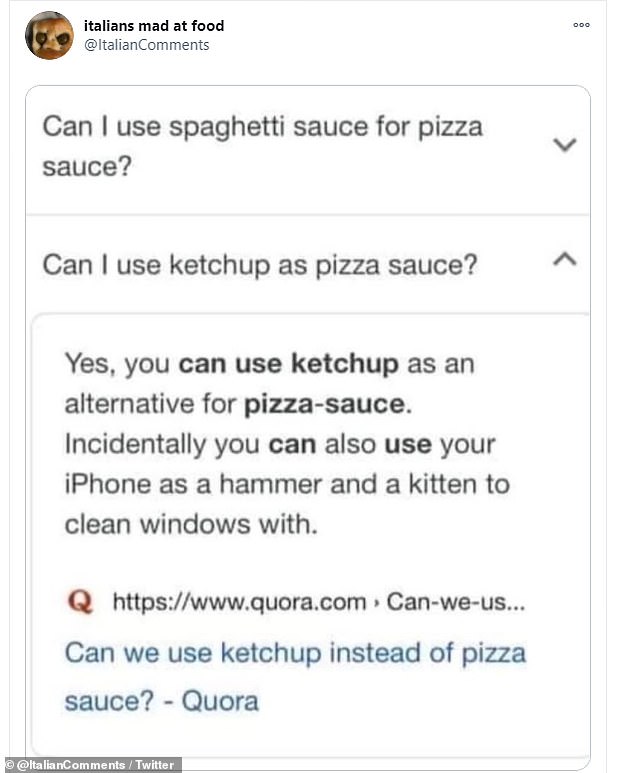 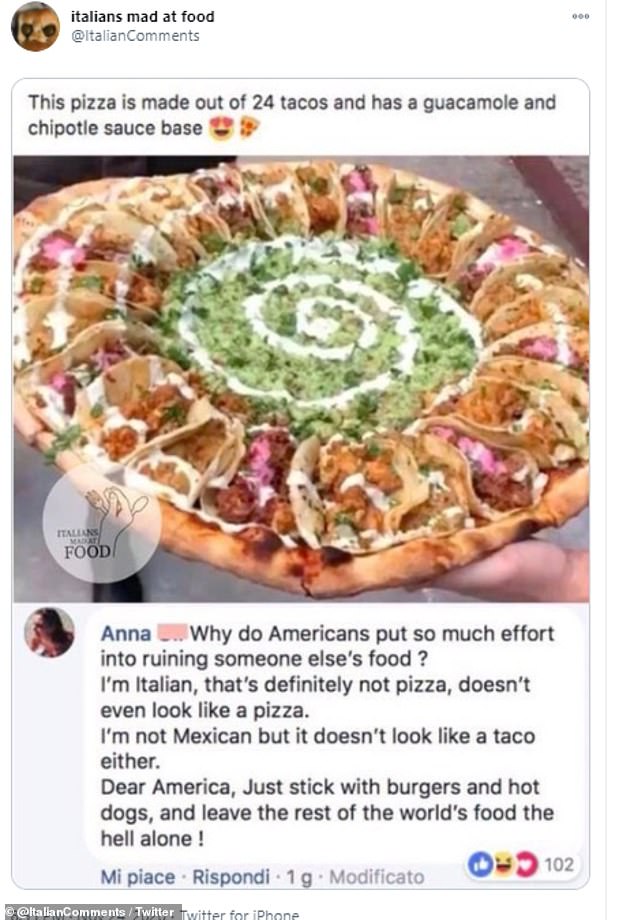 Bad fusion! One Italian said that this Mexican-American mash up was ‘definitely not pizza’  and advised the Americans to ‘stick to burgers’ 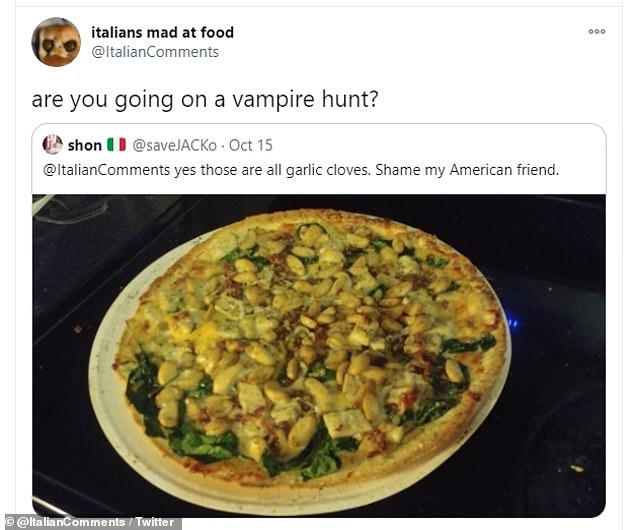 Time for a vampire hunt! One Twitter user suggested covering a pizza in garlic – which was not taken well 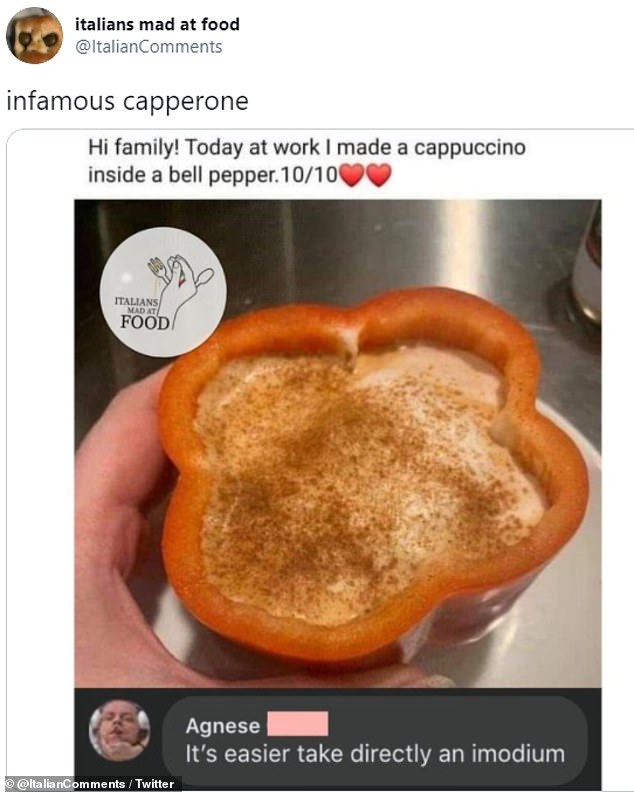 For that peppery kick! After one Twitter user shared a picture of a cappuccino served in a bell pepper one Italian thought it would be better to take medicine 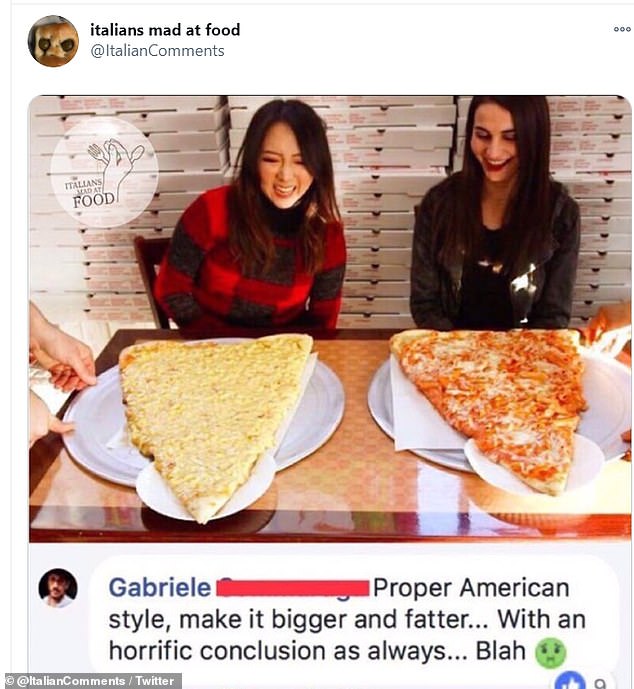 One Italian took umbrage with this American pizza, adding they make them ‘bigger, fatter and more horrific’ 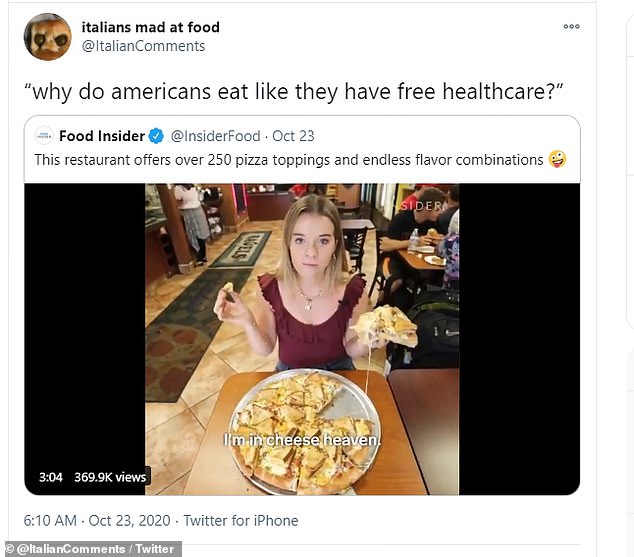 ‘Why do American eat like they have free healthcare?’ Retweeting a video of a restaurant with 250 pizza toppings, one account had some very concerned words about US pizza 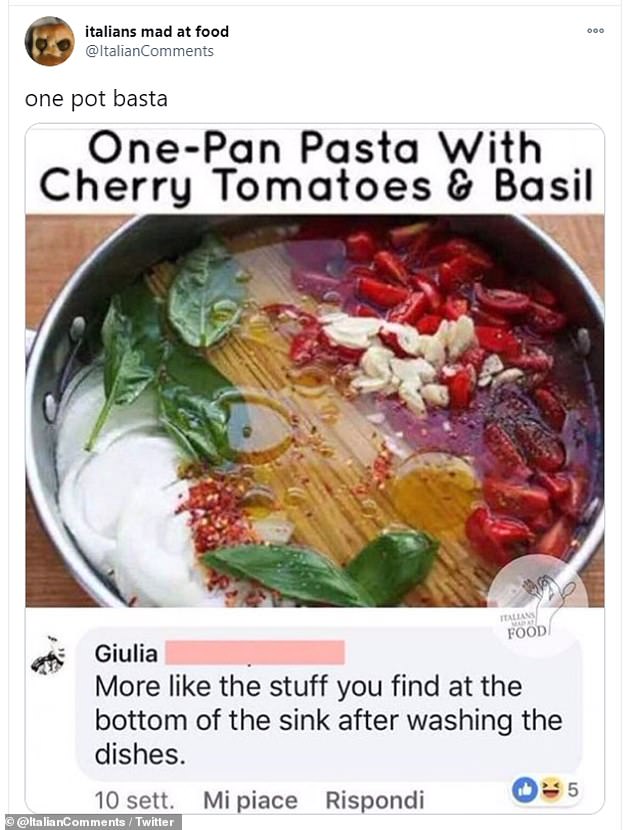 After one Twitter account suggested cooking sauce and pasta in the same pot, one Italian said it looks like something that’s found at the bottom of sink 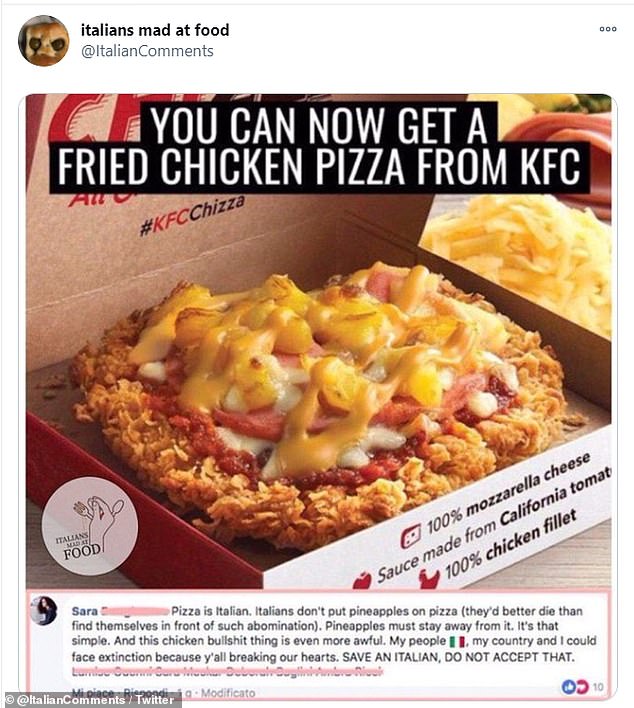 This is not a pizza! After KFC launched a ‘fried chicken pizza’ topped with pineapple one Italian said that they cannot accept it 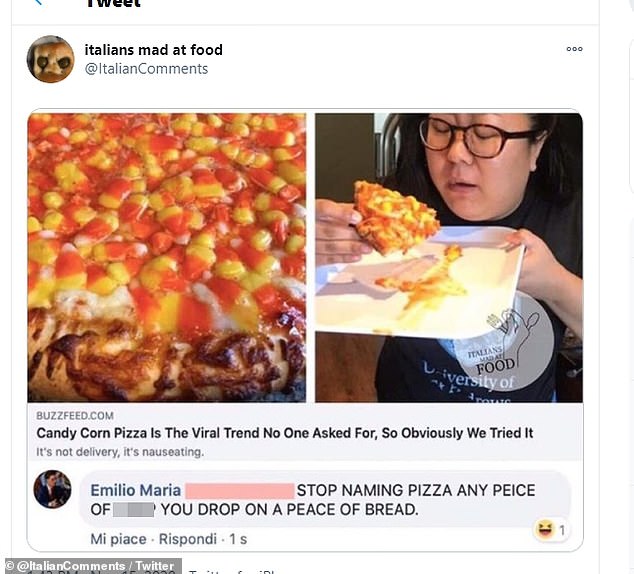 ‘Stop naming any piece of c*** on bread is pizza!’ One Italian was particularly annoyed after reading an article about candy corn pizza 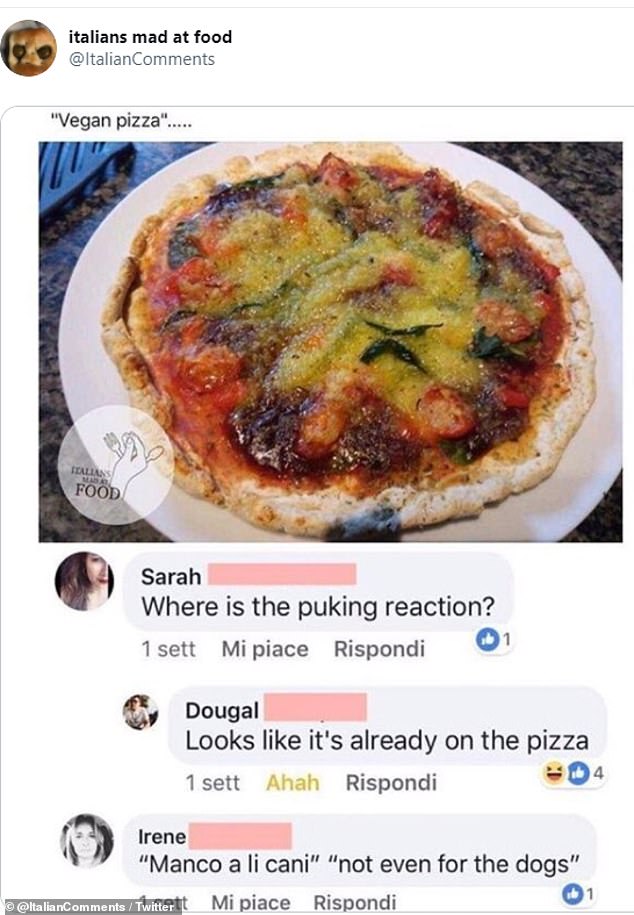 Vegan pizza isn’t pizza! One user said that a pizza, made with vegan cheese, looked like someone had been sick on it 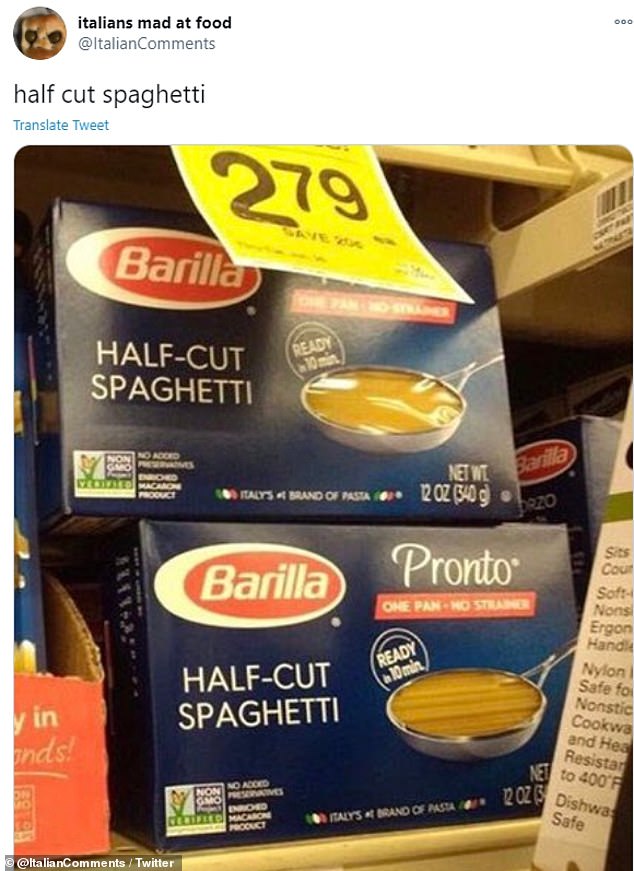 You break spaghetti, you break my heart! The Twitter account say that spaghetti should never be cut in half 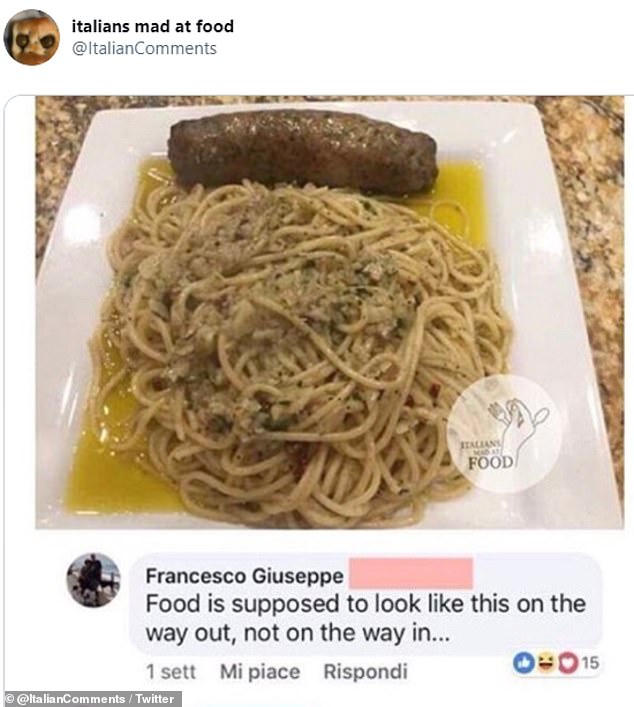 Harsh words! One user said that food is supposed to look like that one ‘the way out’ not ‘on the way in’ 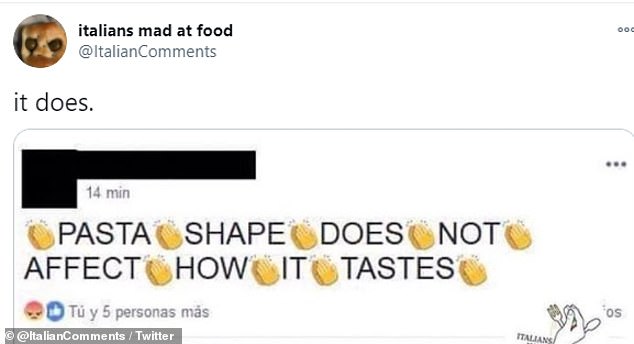 How can you be so f****** wrong! One user took offence to someone saying you can match any pasta with any sauce 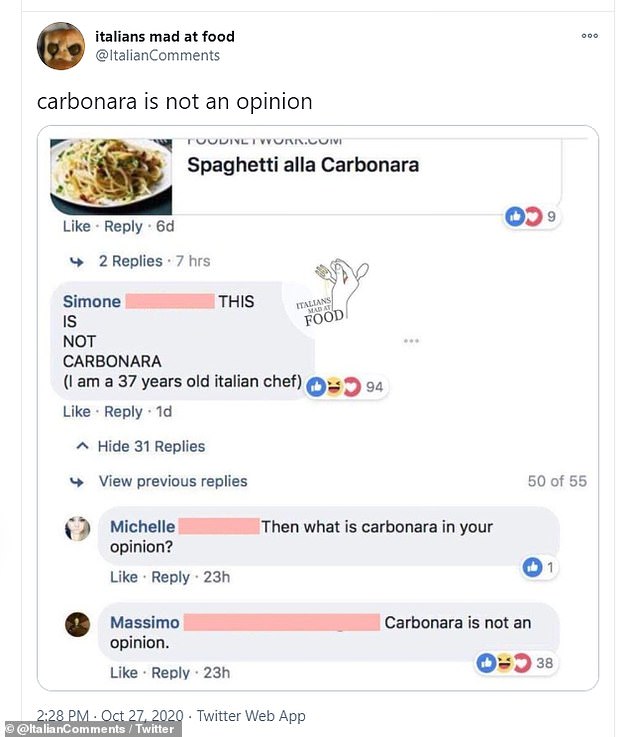 Carbonara is not an opinion! Some Italians got into a very heated discussion over what constitutes to the classic dish 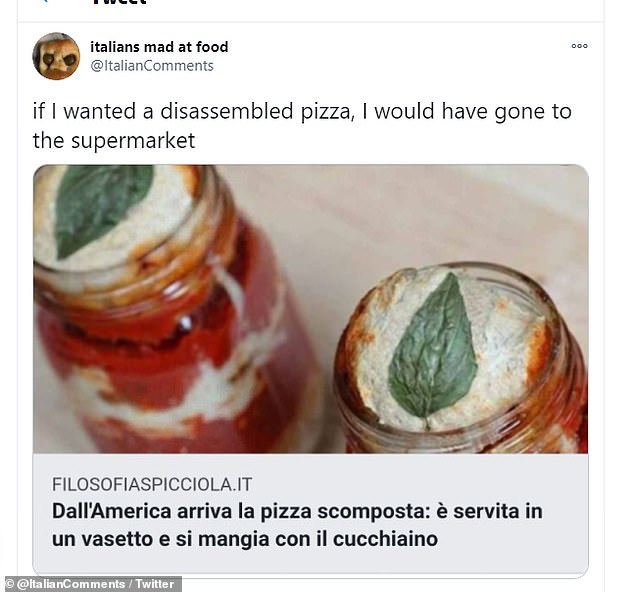 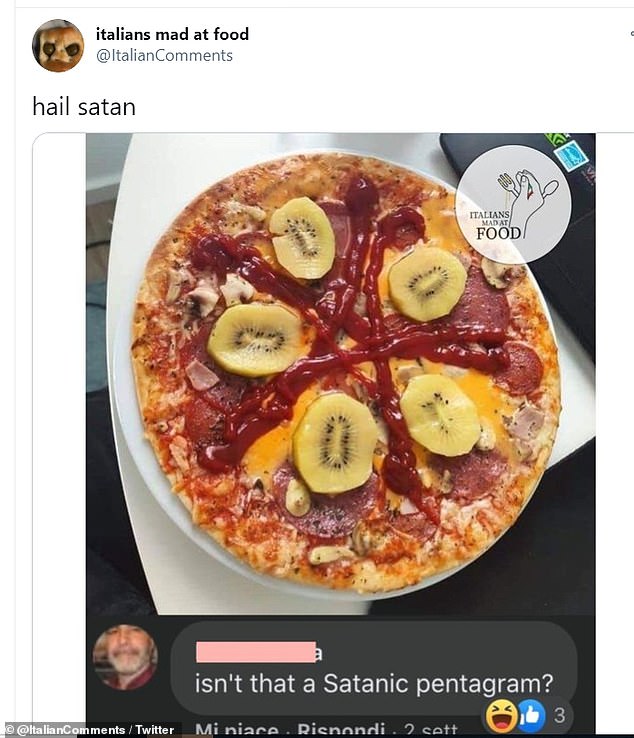 Is that a Satanic pentagram! One pizza covered with kiwi, tomato ketchup and ham was compared to the devil