By Sam Joseph Semon For Mailonline

She recently gave birth to her second daughter and third child overall.

And on Friday afternoon, Hilary Duff was seen taking a stroll with her eldest daughter Banks Violet after they picked up lunch from a Los Angeles restaurant.

The mother-daughter duo appeared to be enjoying their time together as they took in the pleasant springtime weather and shining California sun. 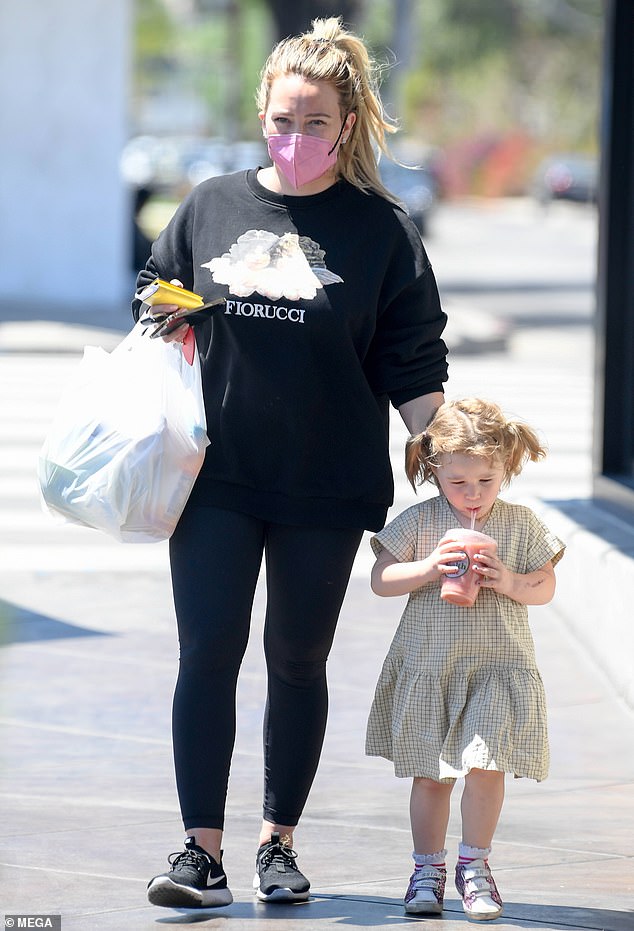 Mom time: Hilary Duff was seen spending time with her daughter Banks Violet while they picked up lunch in Los Angeles on Friday afternoon

Duff was dressed in a black Fiorucci crewneck sweater that she paired with a matching set of athletic leggings.

The Lizzie McGuire star’s typically flowing blonde hair was tied back in a loose ponytail.

Hilary wore a bright pink face mask that kept her protected from COVID-19 while interacting with people from outside her immediate family. 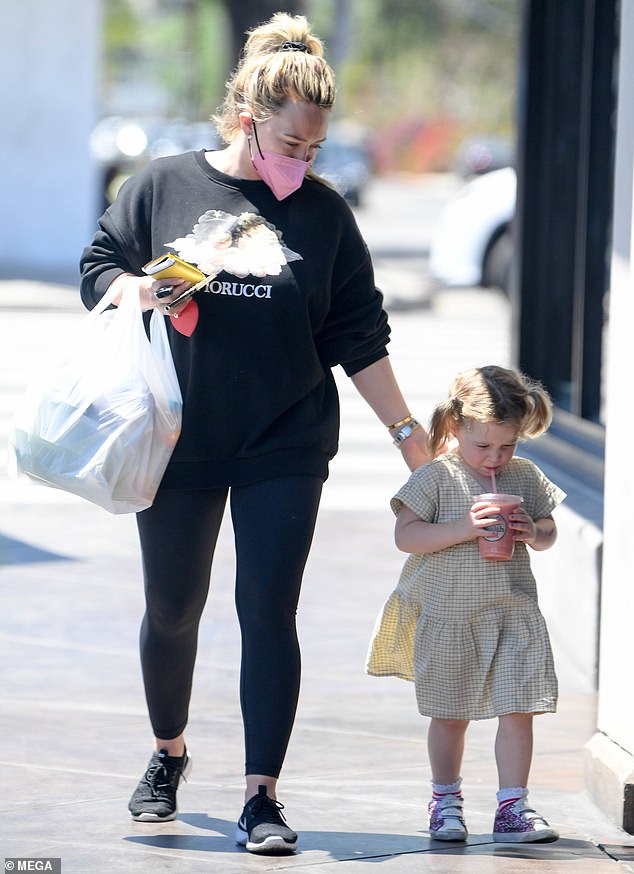 Staying cozy: The Lizzie McGuire star wore a black crewneck sweater and a pair of matching athletic leggings while stepping out with her eldest daughter

Duff shares her two-year-old daughter with husband, Matthew Koma, whom she married in 2019.

The two had been acquainted since 2015 when they collaborated while working on the singer’s fifth studio album, entitled Breathe In. Breathe Out.

Earlier this year, the couple welcomed their newest daughter, whom they named Mae James.

In addition to her two daughters, the Cheaper By The Dozen actress is also a mother to a son named Luca Cruz, aged nine. 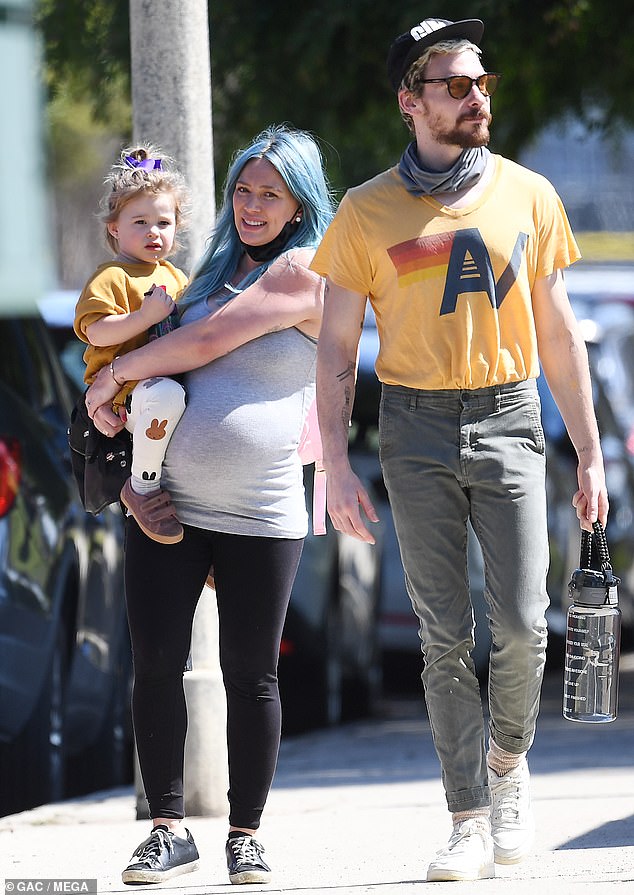 Happy parents: Duff shares two of her three children with her husband and former collaborator, Matthew Koma; they are seen with Banks in March

Duff shares her oldest child with her first husband, Mike Comrie, whom she married in 2010 and divorced six years later.

During an interview with Cosmopolitan, the actress noted that, although she is happy being a mother, she still feels the need to have time for herself.

The performer noted, ‘there are times where I’m like, “I need to go and drink too much wine with my girlfriends.” You know what I mean? My husband’s like, “You go, I’ve got the kids.” He could be in quarantine for years more!’

She then spoke about becoming a mother at an early age and expressed that she was happy to take on that role near the beginning of her career. 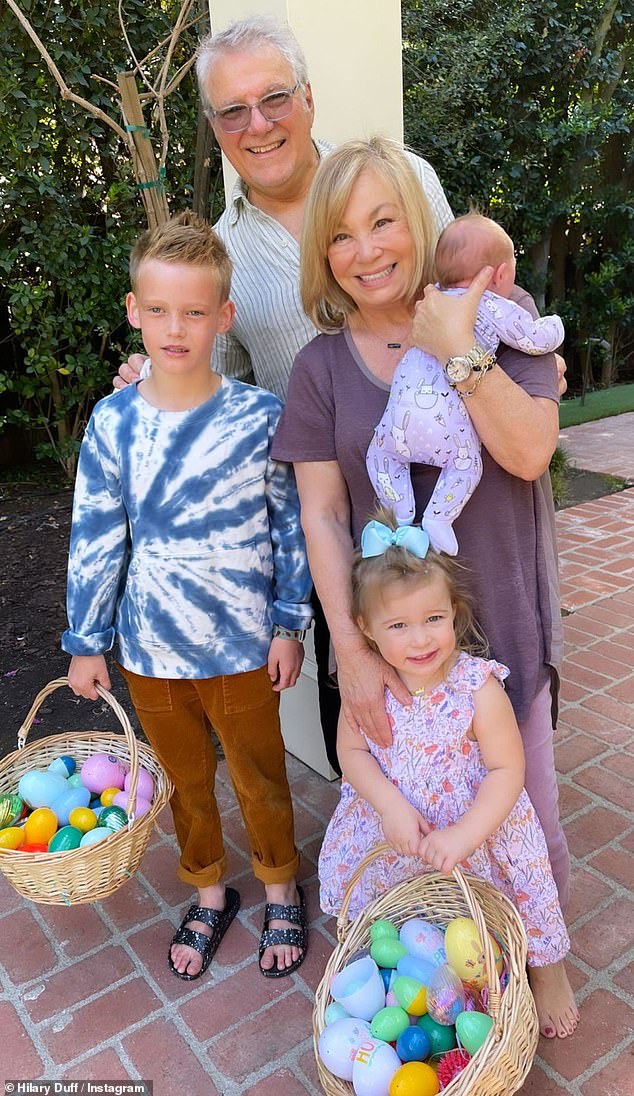 Big family: The pair also share a newborn daughter named Mae James, and Duff coparents her eldest child, Luca Cruz, with her former husband, Mike Comrie; her children are seen with their grandparents earlier this month

Duff concluded by remarking that she has always maintained a positive outlook on life and that she is proud of how far she has come as an individual.

She said, ‘I’ve had a lot of things to overcome but I feel very lucky to have not had to deal with depression. I wake up happy. I’ve always been like, “Today’s the day! What are we doing?!”‘ 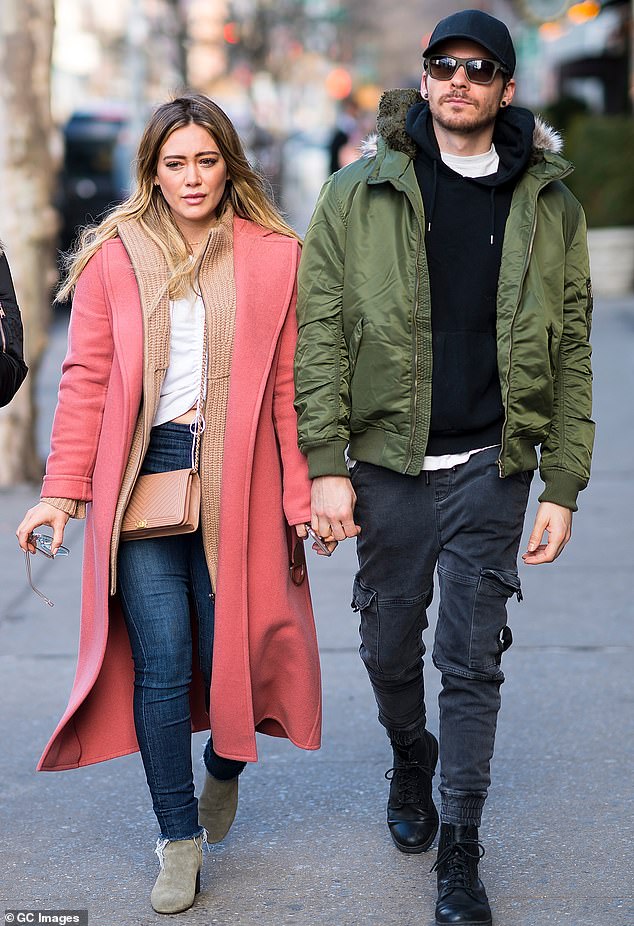 Moving forward: During an interview, Duff stated that she felt like she had ‘done so much’ in the early stages of her career and that she was ‘ready for something more’ while preparing to become a mother; she is seen with Koma in 2017