Hillary Clinton has claimed that President Donald Trump commuted the sentence of his former adviser as ‘a continuation of the cover-up’ into the Russia probe.

The former Secretary of State opened up on Joy Reid’s inaugural The ReidOut show on MSNBC Monday night, telling the host that the controversial move was ‘to basically shut up Roger Stone.’

The political operative’s 40-month prison sentence for lying to operatives and witness tampering in the Robert Mueller-led probe into Russia meddling on the 2016 election was commuted on July 10.

It was just days before Stone was to report for detention. 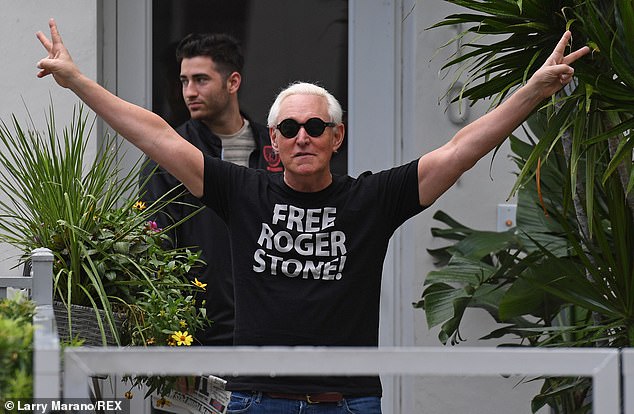 The host asked her to respond to Donald Trump commuting Roger Stone’s three-year sentence this month for lying to operatives and witness tampering. She said he used his power to ‘basically shut up Roger Stone’ but didn’t elaborate on what Stone may know. Stone is pictured July 12 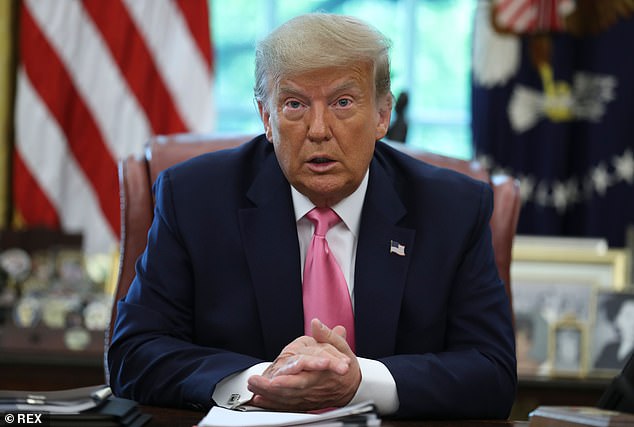 ‘It’s clear that Stone threatened him privately and publicly of what he would say if he had to go to prison,’ for the conviction in the Russia probe, Clinton claimed about President Trump

Stone, who entered the political arena while still at college, leading a campaign for President Nixon before becoming a self-described ‘dirty tricks’ master, has known Trump for 40 years.

Stone had boasted during the campaign that he was in contact with WikiLeaks founder Julian Assange through a trusted intermediary and hinted at inside knowledge of WikiLeaks’ plans to release more than 19,000 emails hacked from the servers of the Democratic National Committee.

Reid played Clinton a tape of Trump asking Russia to find her missing emails and said: ‘I want to give you a chance to respond to the fact that Donald Trump has now commuted the sentence of at least one of the people who were listening.

‘Russia was listening and so was Roger Stone. What do you think of the commutation of his sentence?’

‘It’s clear that Stone threatened him privately and publicly of what he would say if he had to go to prison,’ Clinton claimed.

‘This is a continuation of the cover-up, it’s an ongoing cover-up that Trump and Stone are two of the major participants in to try to prevent us from knowing all of the details about what they actually did in 2016.’

‘Some of it was very public, I mean, asking Russia in public, to interfere in American elections. But some of it was clandestine, behind the scenes, sending messages…

‘What he did was to use the awesome power of commutation as part of the pardon power of the president, to basically shut up Roger Stone.’ 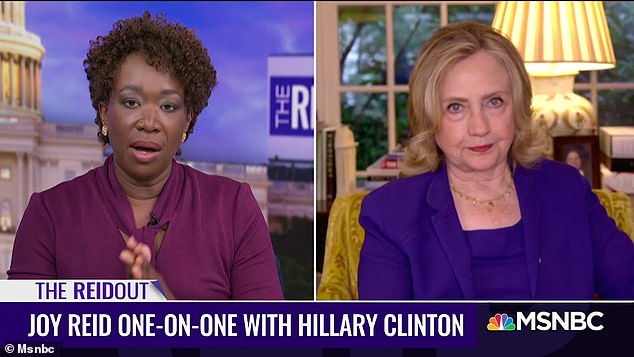 Clinton didn’t elaborate on what Stone may know.

However she said Russia was successful in swinging votes.

‘It’s very clear that Russia succeeded,’ Clinton said. ‘They believe that they were able to influence the minds and even votes of Americans, so why would they stop? They really want to pursue their agenda of dividing us.’

But she added she is ‘glad that Vice President Biden, with all of his experience in foreign affairs … is trying to warn the American people that what happened in 2016 is sadly underway again.’

‘It’s very clear that Russia succeeded,’ she told MSNBC. ‘They believed that they were able to influence the minds and even the votes of Americans, so why would they stop?’

The same day he said that he is putting Russia and other foreign governments ‘on notice’ that he would act aggressively as president to counter any interference in US elections. 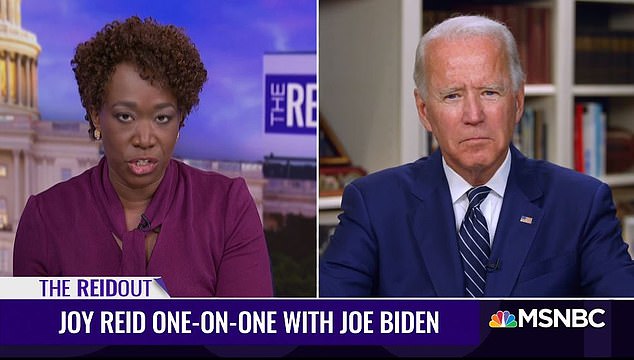 Democratic presidential candidate Joe Biden also appeared on the show on Monday. On the show Biden said Russian President Vladimir Putin ‘knows I mean what I say,’ as he too claimed Russia is meddling in this election

The statement came hours after Democratic leaders issued a new warning that Congress appears to be the target of a foreign interference campaign.

Biden said in a statement that he would treat foreign interference as ‘an adversarial act that significantly affects the relationship between the United States and the interfering nation´s government.’

He criticized President Trump for not doing enough in response to US intelligence agencies’ assessment that Russia interfered in the 2016 presidential election.

‘If any foreign power recklessly chooses to interfere in our democracy, I will not hesitate to respond as president to impose substantial and lasting costs,’ Biden said.

The new alarms give a renewed urgency to concerns that foreign actors could be trying to influence the vote or sow disinformation.

Biden said last week that he had begun receiving intelligence briefings and warned that Russia, China and other adversaries were attempting to undermine the presidential election.

Biden gave no evidence, but he said that Russia was ‘still engaged’ after 2016 and that China was also involved in efforts to sow doubts in the American electoral process.

During an online fundraiser Monday night, Biden added: ‘It’s going to be tough, there’s not much I can do about it now except talk about it, and expose it, but it is a serious concern. It is truly a violation of our sovereignty.’