Hillary Clinton is fueling her feud with Facebook, slamming Mark Zuckerberg as ‘authoritarian’ and ‘Trumpian’ for how he runs the social media platform.

The Former Secretary of State opened up on her sordid view of Facebook and how she saw the social network attack her during her 2016 presidential run.

‘I didn’t really know this was happening to me. We did not understand what was going on below the radar screen,’ she said to The Atlantic on the misinformation campaigns that spewed on Facebook against her and in favor of getting Donald Trump into the White House.

Hillary Clinton (pictured at Sundance Film Festival)  is fueling her beef with Facebook, slamming Mark Zuckerberg as ‘authoritarian’ and ‘Trumpian’ for how he runs the social media platform and misinformation campaigns 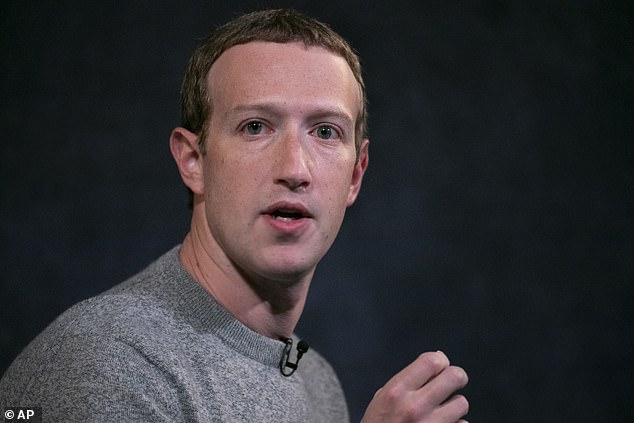 Last year Zuckerberg said Facebook wants to moderate content as little as possible and doesn’t want to censor free speech, even if it means airing paid content from politicians that aren’t accurate

Despite revelations of Russian and troll misinformation campaigns online, Clinton says she’s alarmed by Zuckerberg’s unwillingness to have Facebook buckle down on such propaganda.

Clinton noted last spring a slowed-down video of Speaker of the House Nancy Pelosi went viral online, distorting the speed so that she appeared to slur her words and appeared cognitively impaired.

‘Google took it off YouTube…so I contacted Facebook. I said, Why are you guys keeping this up? This is blatantly false. Your competitors have taken it down, And their response was, We think our users can make up their own minds,’ Clinton said.

Facebook’s stance on misinformation has been at the forefront of a fierce political debate, especially when it comes to elections.

Last year Zuckerberg said Facebook wants to moderate content as little as possible and doesn’t want to censor free speech, even if it means airing paid content from politicians that aren’t accurate.

The CEO previously told The Atlantic then when reconciling between facts and opinions shared on Facebook, he believes users can decide for themselves what they want to believe.

‘You should decide where you want to be,’ he reasoned.

But Clinton is calling Facebook’s trade of moral accountability for commercial profitability ‘Trumpian’.

When asked if Zuckerberg’s reasoning in taking a step back from monitoring information disseminated on Facebook, Clinton said, ‘It’s Trumpian. It’s authoritarian.’

‘I feel like you’re negotiating with a foreign power sometimes,’ she said on trying to speak with Facebook leaders, revealing she’s had conversations ‘at the highest levels’ with Facebook.

‘He’s immensely powerful. This is a global company that has huge influence in ways that we’re only beginning to understand,’ she added.

CEO Zuckerberg was caught in leaked audio airing his disapproval for presidential hopeful Elizabeth Warren saying he would ‘go to the mat and … fight’ her.

Clinton said the Facebook boss has ‘somehow persuaded that it’s to his and Facebook’s advantage not to cross Trump. That’s what I believe. And it just gives me a pit in my stomach.’

‘They have, in my view, contorted themselves into making arguments about freedom of speech and censorship which they are hanging on to because it’s in their commercial interests,’ she said.