Hispanic former Hooters waitress claims she was fired for being pregnant

‘Fired for being pregnant’: Hispanic former Hooters waitress claims ‘breastaurant’ favored white female co-workers who performed sexual favors then terminated her when they discovered she was expecting

Joselyn Izurieta Ulloa (pictured), 25, a Hispanic woman who lives in Long Island, said she was fired from the Hooters restaurant where she worked on February 8 after managers found out she was pregnant

A Hooters bar & grill in Long Island, New York is being accused of discrimination by a former waitress who says she was fired from the racy restaurant after announcing she was pregnant.

Joselyn Izurieta Ulloa, 25, who is Hispanic and lives in Long Island, filed a complaint with the New York State Division of Human Rights on Friday after being fired from the Hooters franchise in Farmingdale, New York on February 8.

Ulloa also claims Tony Ferro, the white general manager at the Hooters where she worked for about 15 months, showed preferential treatment to his white waitresses, who Ulloa claims were exclusively chosen to service rich, white clients during special events like golf outings.

‘In July of 2018, Joselyn asked Ferro, “Why are there only white girls on schedule for the golf promos?”‘ Ulloa’s attorney Dave Rosenberg told DailyMail.com on Tuesday.

‘Ferro replied, “Because golf promos are full of old, white men with money who are only attracted to ‘open-minded’ white girls and I need to keep business running.”‘

Rosenberg said his client believed she was being treated differently not only because of her race, but also her opposition to providing sexual favors to Hooters customers.

‘The “open-mindedness,” my client wasn’t interested in that. She just wanted to wait tables,’ he said.

During another alleged incident in June 2018, Ulloa claims another Hispanic waitress and friend of hers named Allejandra Rosado was reduced to tears after being yelled at and called a ‘c**t and a little Spanish b***h’ by a white male customer who worked for a local fire department. 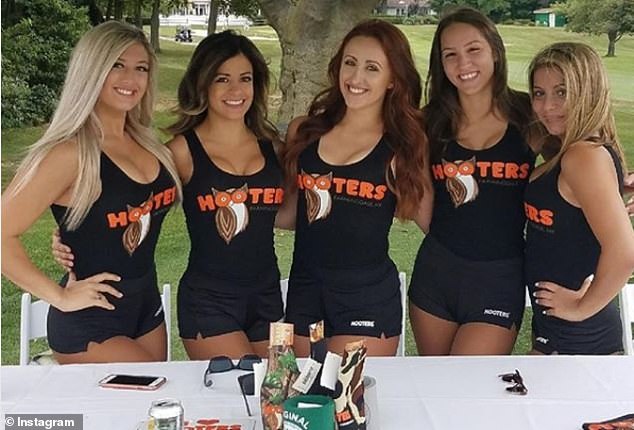 The file photo show employees at the Farmingdale Hooters on a golf outing in August 2017 in a snap shared to the branch’s Instagram page. None of the women above are not implicated in the lawsuit. Ulloa’s attorney Dave Rosenberg told DailyMail.com on Tuesday: ‘In July of 2018, Joselyn asked Ferro, “Why are there only white girls on schedule for the golf promos?”‘

Ferro, the manager on duty, refused to hold the alleged bigot accountable.

‘Ferro told my client, “I’m not going to ask him to apologize. One day your house may be on fire and you’ll ask people like him to rescue you,”‘ Rosenberg said.

The former waitress’s attorney said her position at Hooters was terminated less than a week after her bosses found out she was pregnant on February 2.

Their justification for firing her was that a customer complained ‘his food was cold and his beer was warm’. 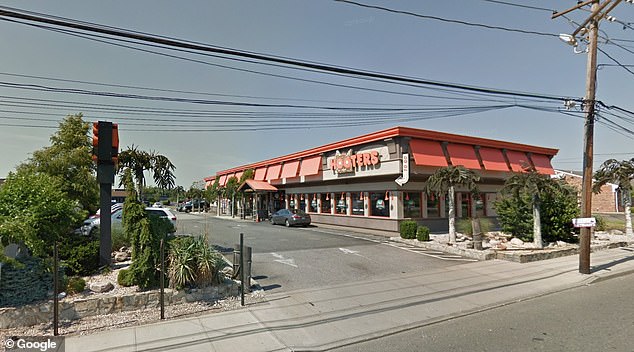 Managers at the Hooters restaurant in Farmingdale, New York (pictured) have also been accused of sexually harassing and showing preferential treatment to white waitresses

‘She goes back to work on February 8 and Ferro said, “Why are you here? You got a bad complaint from a customer. I have to terminate you,’ Rosenberg said.

‘My client denies this ever happened. But other waitresses have gotten bad reviews and were not fired for it.’

The company told the New York Daily News it was investigating the matter.

A man answering the phone at Hooters in Farmingdale who said he was one of the restaurant’s managers also declined to comment on the allegations.