Historian reveals Napoleon was a man who loved nature

NAPOLEON: A LIFE IN GARDENS AND SHADOWS

In 1814, a few days after Napoleon abdicated as Emperor of France, the British artist Benjamin Robert Haydon stopped his coach to offer a lift to a battle-weary French grenadier.

‘If Bonaparte had reigned longer,’ the young soldier told him, ‘he would have murdered all the world, then made war on the animals.’

Some 200 years after his death, Napoleon Bonaparte is still a magnetic and polarising figure — as the controversy surrounding French president Emmanuel Macron’s pilgrimage to his tomb this week illustrates all too vividly.

In this strikingly original account of Napoleon’s life, historian Ruth Scurr shows him not as a soldier or legislator, but as a gardener, a man who loved nature but was also obsessed with controlling it.

Born Napoleone di Buonaparte in 1769 on the island of Corsica, at the age of nine he was sent away to school, where he was horribly homesick for the family garden. One of his few consolations was the small plot of land each boy was given to look after; legend has it that, in an early sign of his expansionist ambitions, he soon took over the neglected plots on either side of him.

When, in 1792, he arrived in turbulent post-revolutionary Paris, few would have predicted that this young soldier, shabby and broke, was destined for great things.

But thanks to his intelligence and ability to inspire loyalty, his rise was extraordinary.

In 1796, he married Josephine de Beauharnais, a widow six years older than him. The day after their wedding, Napoleon, by now a general, left for Italy, where a series of military victories turned him into a French national hero. As his troops moved through Italy, Napoleon helped himself to botanical specimens to send back to Paris; he even kept a botanist to ensure the best plants were selected.

At home, Josephine bought a house called Malmaison just outside Paris, and filled the garden with flowers, especially roses, determined to make it ‘the most beautiful and curious garden in Europe’.

It was a source of much cruel gossip that, although Napoleon’s wife propagated so many fine plants, she was unable to produce an heir.

In 1810, Napoleon, by now Emperor of France, divorced Josephine because he had to have an heir. She fainted at the news. The following year he married 19-year-old Archduchess Marie Louise of Austria, who duly bore him a son. 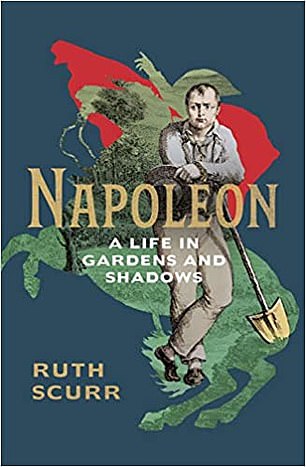 Napoleon dreamed of expanding his territory, and France was almost constantly at war, but the disastrous invasion of Russia led to his downfall, and, in 1814, he was exiled to the small Tuscan island of Elba.

Here he busied himself planting a garden filled with flowers, shrubs and fruit trees. Outwardly, he appeared content pottering around his plants but, in 1815, he escaped and, once more in charge, he determined to drive a wedge between his enemies, the British and the Prussians.

On June 18, 1815, Napoleon and Wellington faced each other for the first time at Waterloo, where much of the early fighting centred on the chateau of Hougoumont and its garden.

The battle was fierce but when Prussian reinforcements arrived, it turned decisively. In failing to win that small patch of ground, the French lost the Battle of Waterloo.

For a second time, Napoleon was forced to abdicate and the British shipped him off to St Helena, the remote island in the South Atlantic. He spent his time there gardening on a lavish scale — transplanting trees, creating fountains and building a large bamboo aviary.

He was still considered the most dangerous man in Europe, and must have taken great delight in designing a maze of sunken paths through his garden, shielding him from the scrutiny of the British sentries, until, in 1821 aged 51, he died from a mysterious stomach ailment.

Napoleon’s achievements were immense: he reorganised the French banking and educational system, revolutionised military training and laid down the Napoleonic Code, which influenced the legal system across much of Europe and the Americas. Yet up to six million people, both soldiers and civilians, died during the Napoleonic Wars.

Did he have any regrets about the terrible destruction he unleashed on the world around him? Perhaps he did. Near the end of his life, Napoleon declared: ‘Man’s true vocation is to cultivate the ground.’