A castle built on top of a Royal household once dubbed ‘the most gorgeous in Christendom’ has gone on the market for £2.5million.

Devizes Castle in Wiltshire was once owned by the Crown for around 500 years after it was claimed by King Stephen of Blois in the 1130s.

It was passed down through the Royal family over the years and was frequently visited by monarchs including King John, Henry III and Edward I, while Henry VIII gifted it to his first wife Catherine of Aragon, although it was later reclaimed after the divorce.

A historic castle, pictured, in Devizes, Wiltshire, has gone on the market for £2.5million and boasts almost 10,000 sq ft of accommodation, turrets, oak floors, fireplaces and views of the English countryside 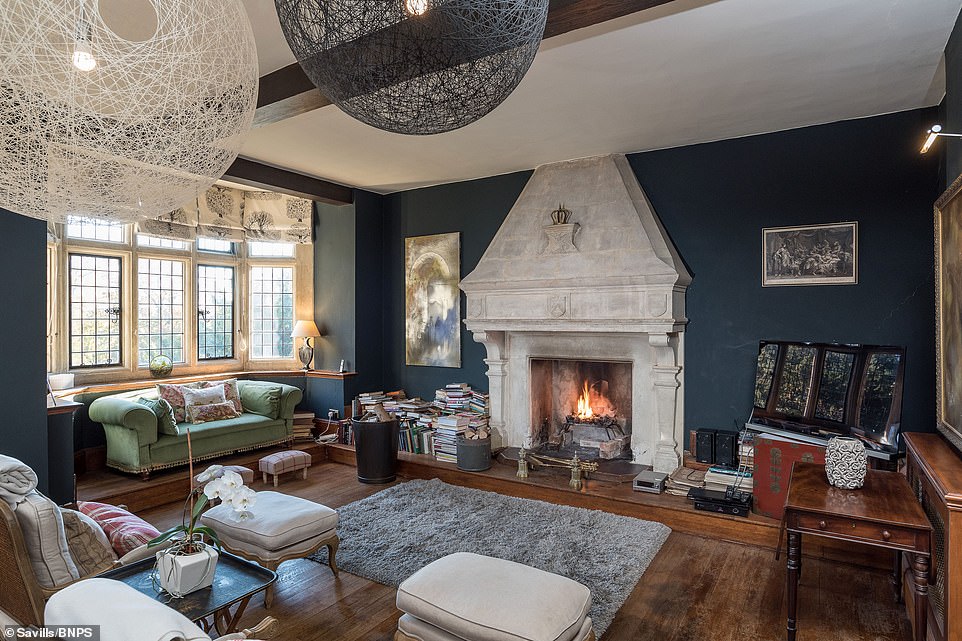 The property is built on top of another castle that was owned by Royal families for around 500 years. It was originally claimed by King Stephen of Blois in the 1130s and passed through generations. Pictured is one of the impressive sitting rooms 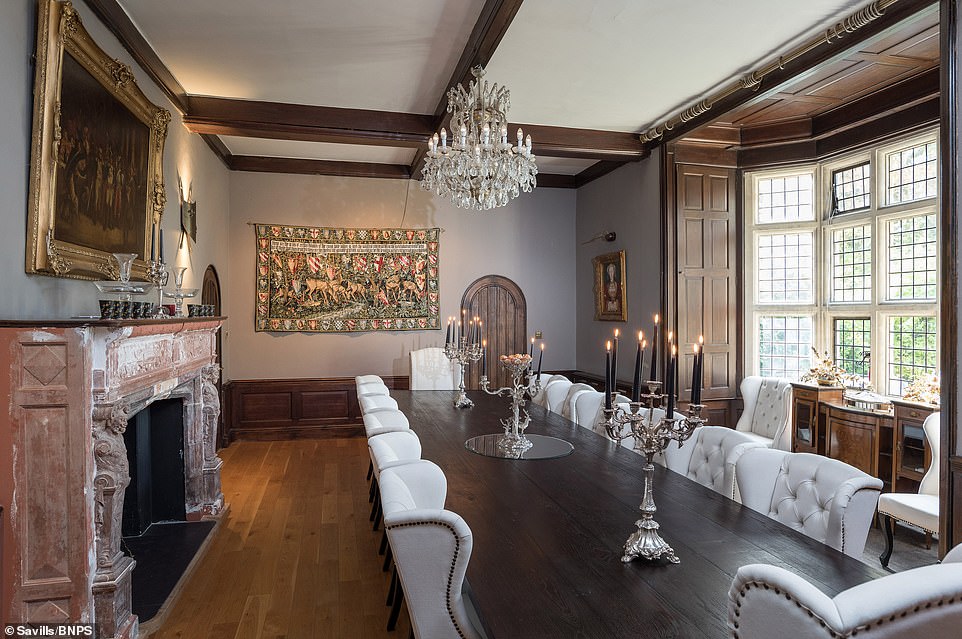 Royals to visit the original castle include King John and Henry III and it became a popular destination for monarchs. Pictured is a dining room with a huge table and a chandelier 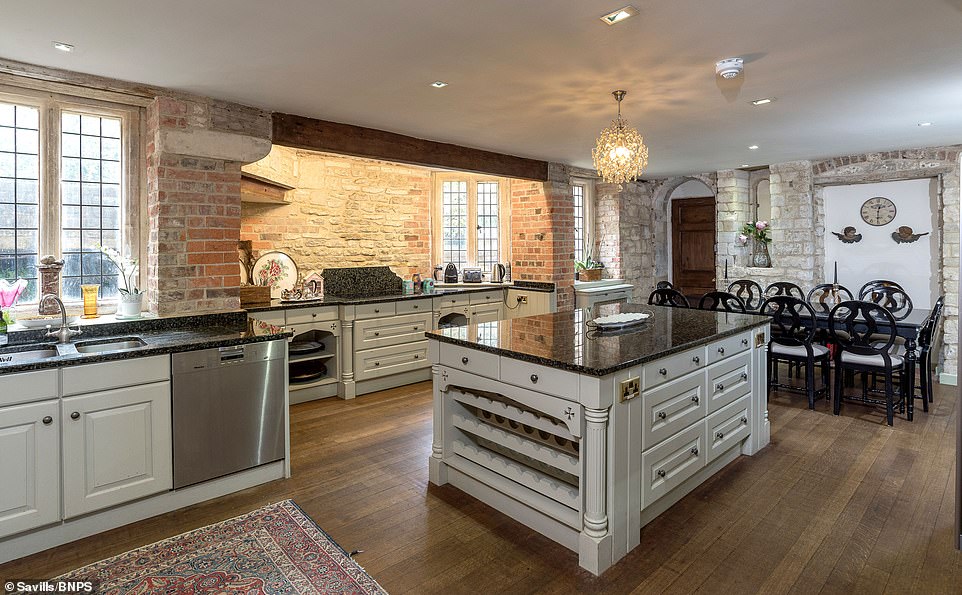 The old castle eventually passed to Henry VIII, who gave it to his first wife, Catherine of Aragon. Pictured is the kitchen which features an island and all the mod cons 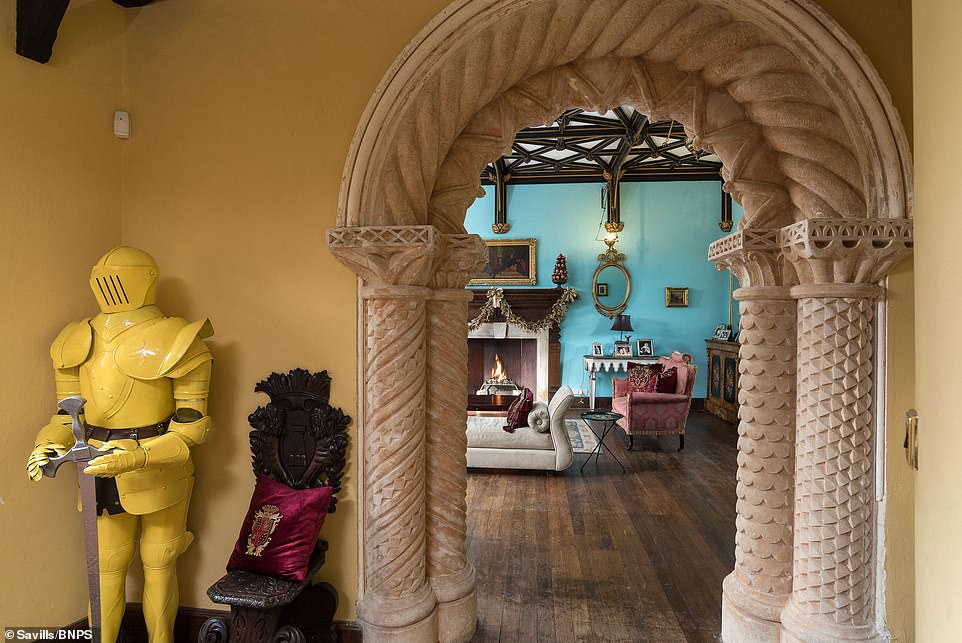 The heritage of the current property has not been forgotten with the historic archways, pictured, and battlements while there are event suits of armour as decorations

The castle was then destroyed in 1648 during the English Civil War, three years after loyalist troops were defeated in a siege by Parliamentarians.

A new castle was built on the site in the 1840s as a private home, and has since been split into two, with the larger property on the market with Savills.

Devizes Castle is steeped in history and dates to 1080 when a motte and bailey castle was built by the Bishop of Salisbury.

The castle was burnt down and rebuilt in stone during King Henry I’s reign and became a popular residence for the monarchy after that, described as ‘the most gorgeous in Christendom’.

All that remains of the original structure now is its mound, the outline of the moat and traces of the foundations of the great hall. 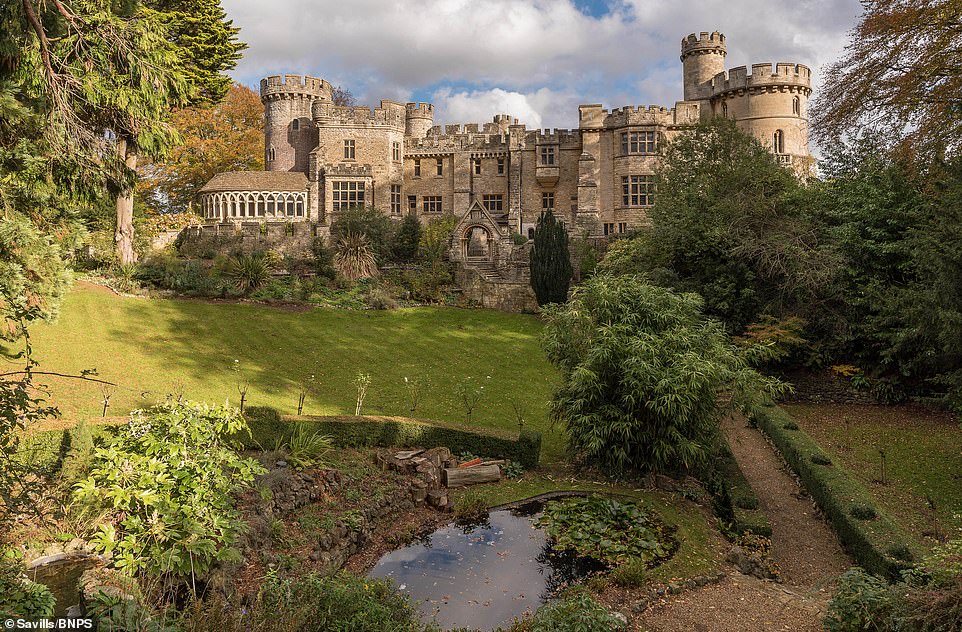 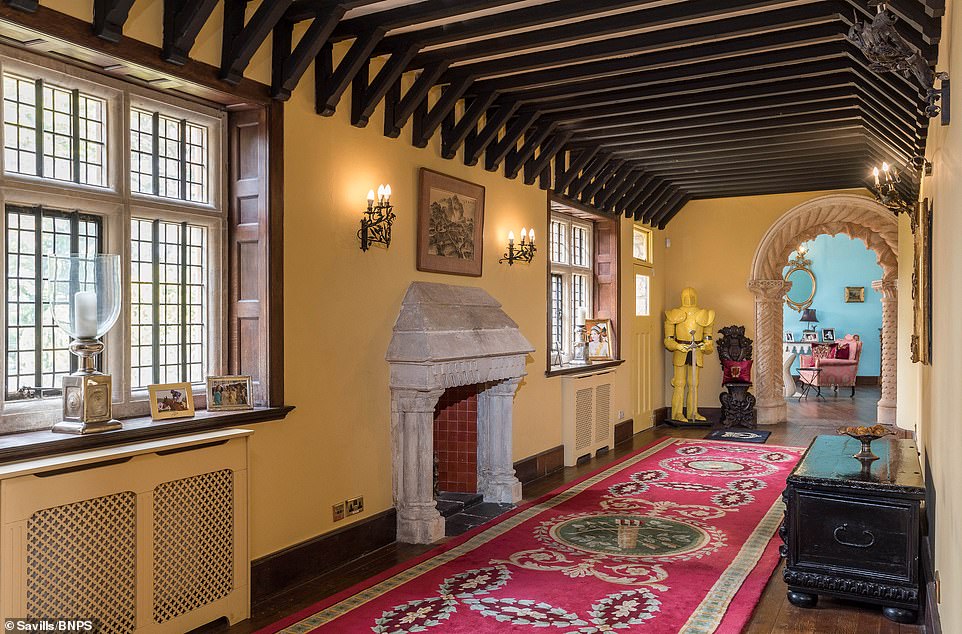 The original property was destroyed during the English Civil War in 1648 after it was besieged by Parliamentarians. Pictured is one of the hallways which also has a fireplace 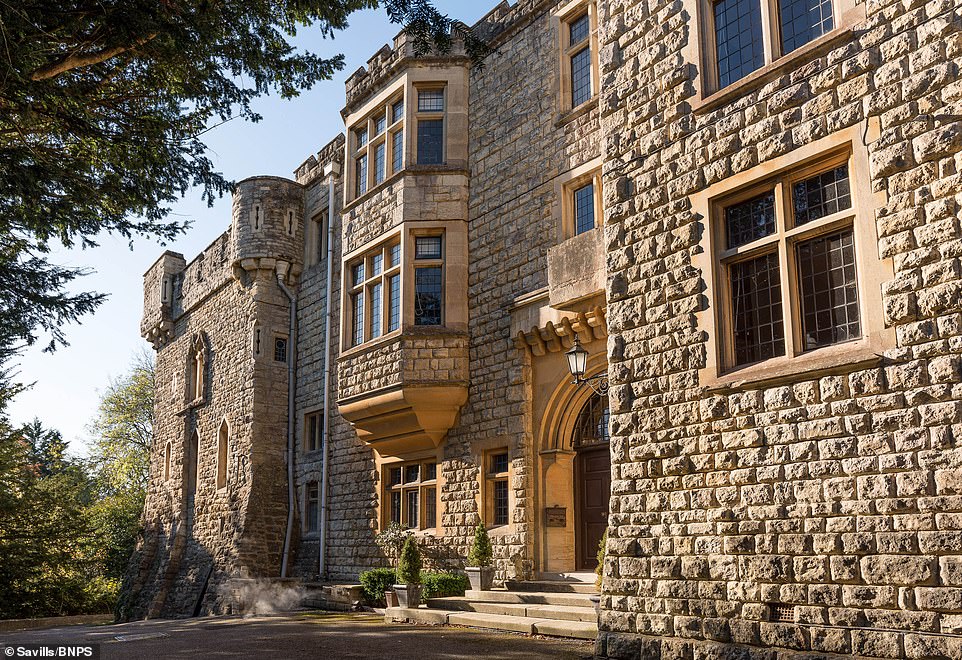 The current castle, pictured, was built in the 1840s as a private home, and has since been split into two households 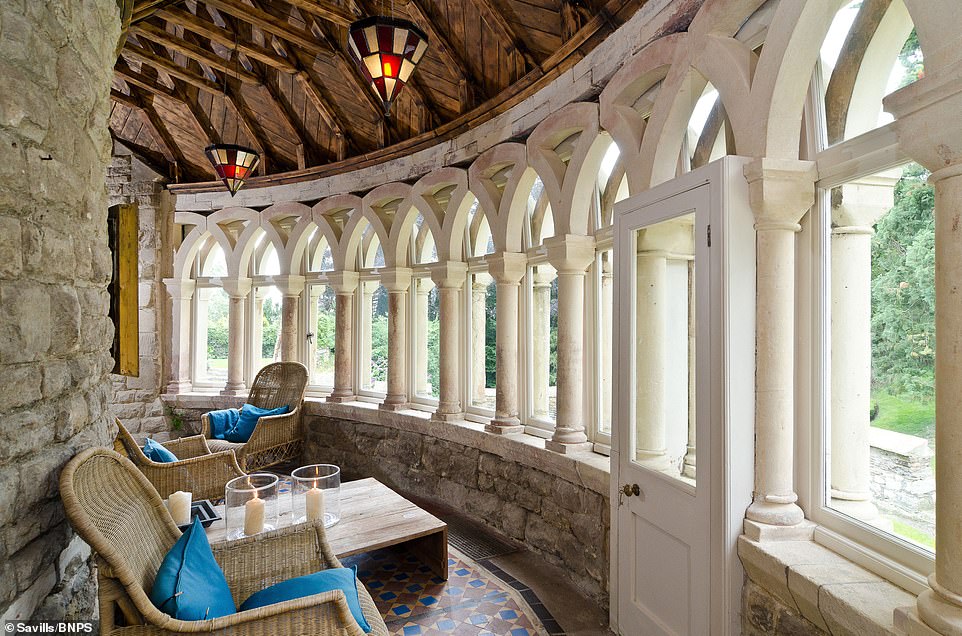 The Victorian Gothic-style home, pictured, features beautiful terraces along with its stone walls and mullioned windows 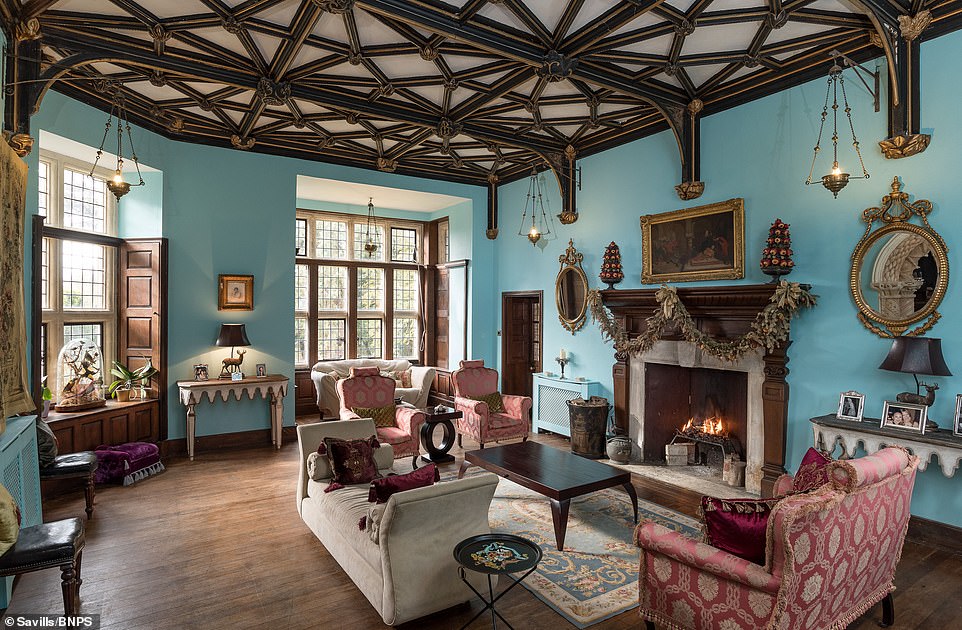 The existing castellated property was built 200 years later by the Leach family in a Victorian Gothic style and was used in the Second World War as an Italian POW camp.

The property is spread over five storeys, with most of the accommodation on the ground, first and second floors, but it also has a cellar and two tower rooms on the third floor.

The house is surrounded by beautiful gardens and offers seclusion with mature trees at the front and the castle’s ramparts at the back.

It sits on the edge of the picturesque market town of Devizes, which formed around the original castle’s outskirts.

The castle has views over rolling countryside on one side and over the town in the other direction. 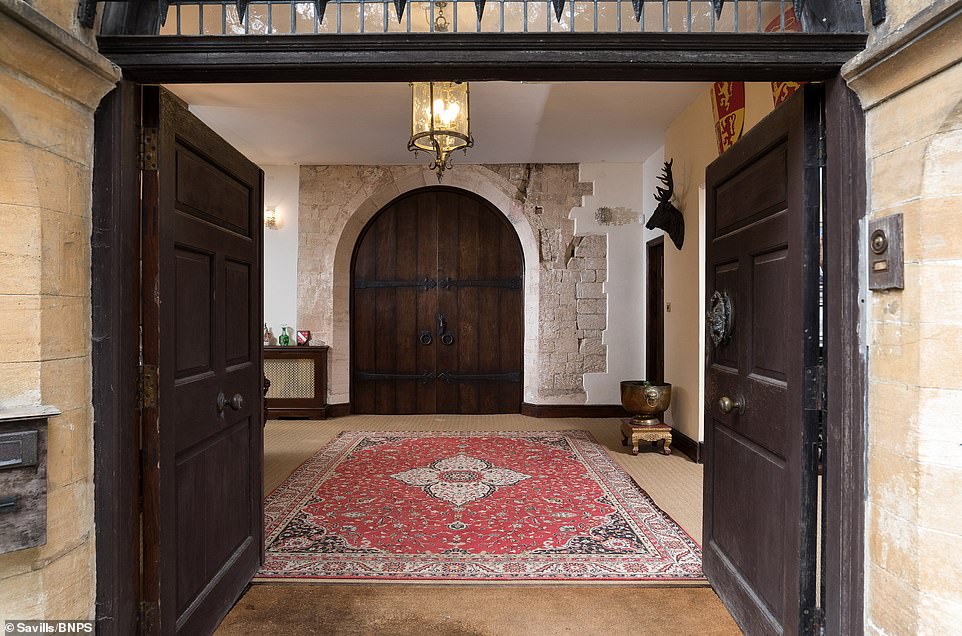 The building sits on the edge of the picturesque market town of Devizes, which formed around the original castle’s outskirts. Pictured are huge double doors leading into an entrance hall 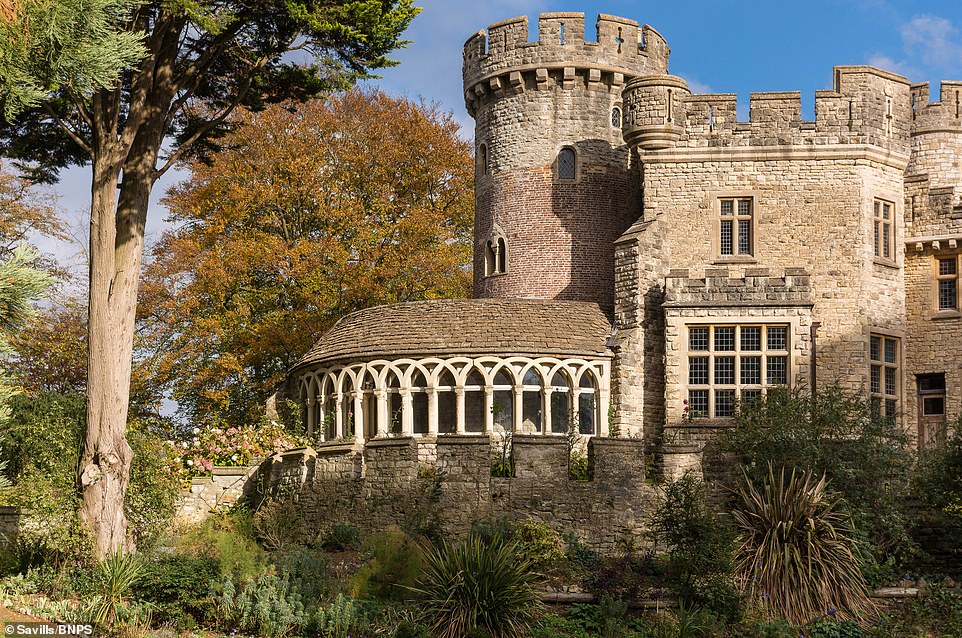 George Nares of Savills said the castle, pictured, was ‘very imposing and impressive’ which would appeal to a ‘history lover’ 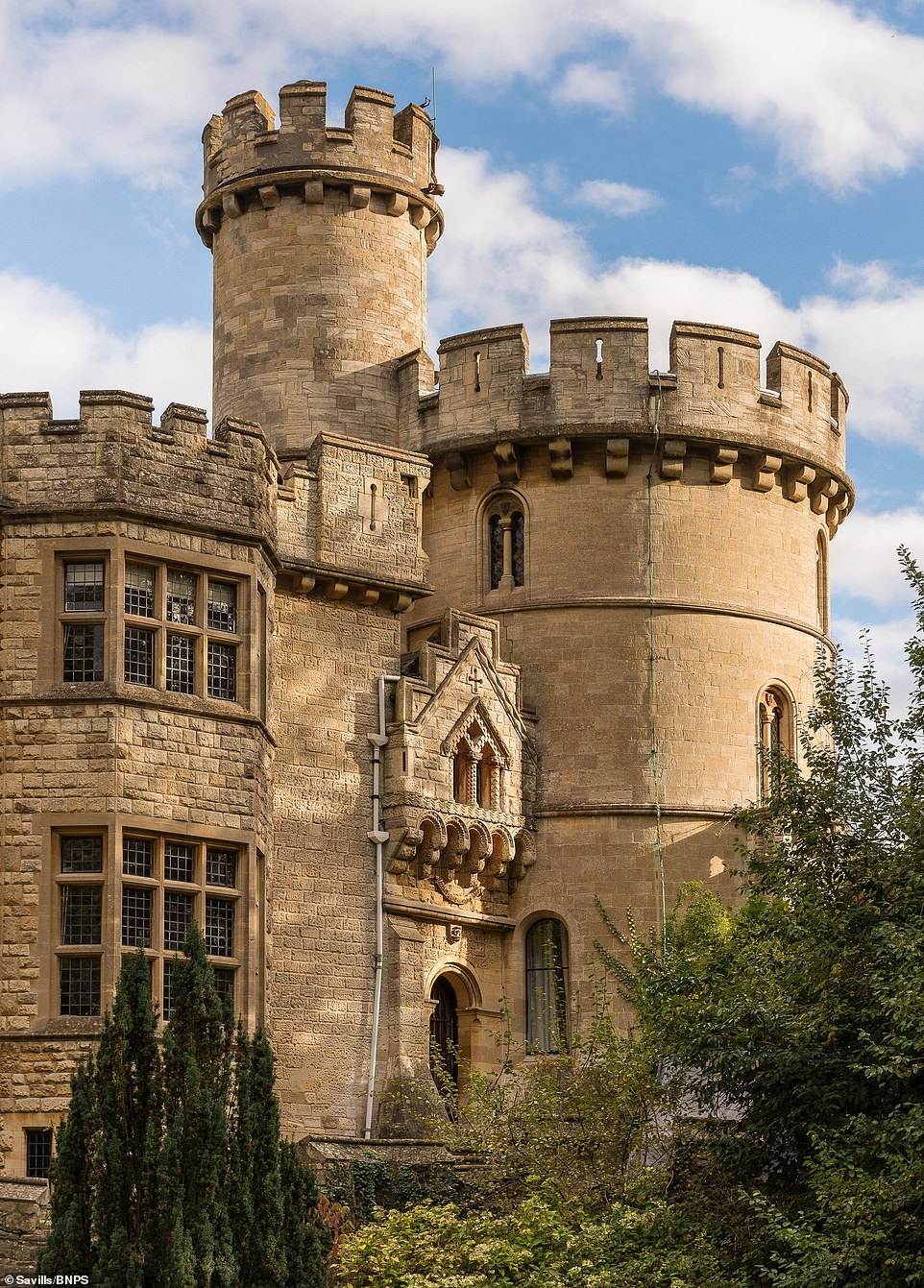 The site was originally home to a motte and bailey castle built by the Bishop of Salisbury in 1080 only to burn down and be rebuilt in stone. Pictured is the turrets of the current structure 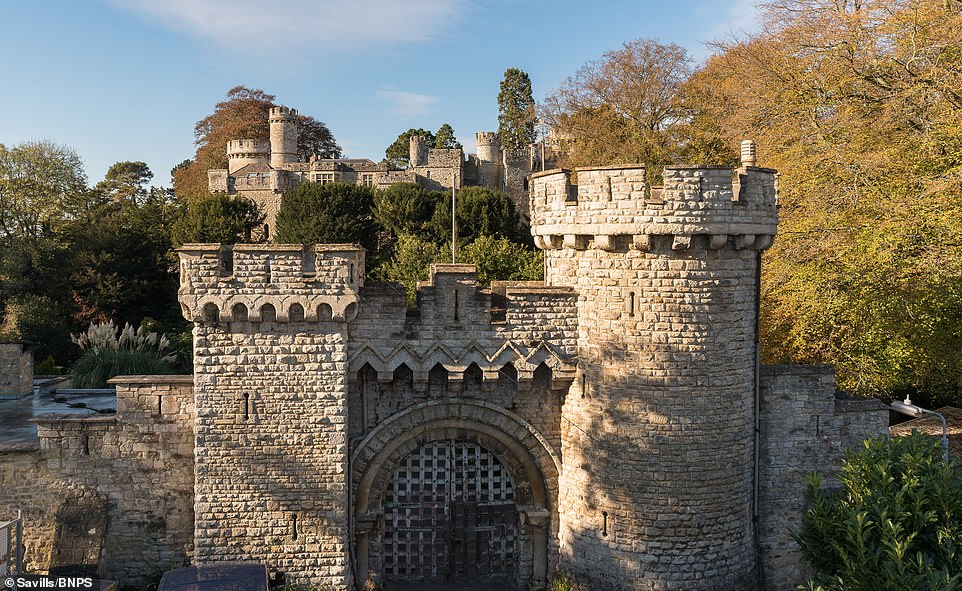 George Nares from Savills said: ‘The castle is very imposing and impressive and this property is the principle part, it’s just the South Tower that is separate.

‘Naturally it will appeal to a history lover, but I think it will also have to be someone quite fun.

‘You have the benefit of the history and nature of it being a castle but at the same time it also has wonderfully proportioned rooms, which lends itself extremely well to modern family living, which is rare in a castle.

‘It’s also great for entertaining, with high ceilings and wonderful cornicing and carvings.

‘It has that sense of fun of a castle too – spiral staircases leading up to tower bedrooms – it’s very magical.

‘Because it was built partly on the old motte and bailey castle, it’s on top of a hill with beautiful views over Devizes itself and open countryside.