The fascinating remains of a historic 18th century ship have washed ashore on a Florida beach.

The 48-foot wooden hull of a gigantic shipwreck was discovered by Julie Turner and her son Patrick, eight, on Ponte Vedra Beach around 8am Tuesday.

Little did the pair realize that the wreck was centuries old and has been hailed as the ‘holy grail’ of shipwrecks.

On Tuesday the 48-foot wreck of an 18th century ship washed ashore on Ponte Vedra Beach in Florida, pictured above 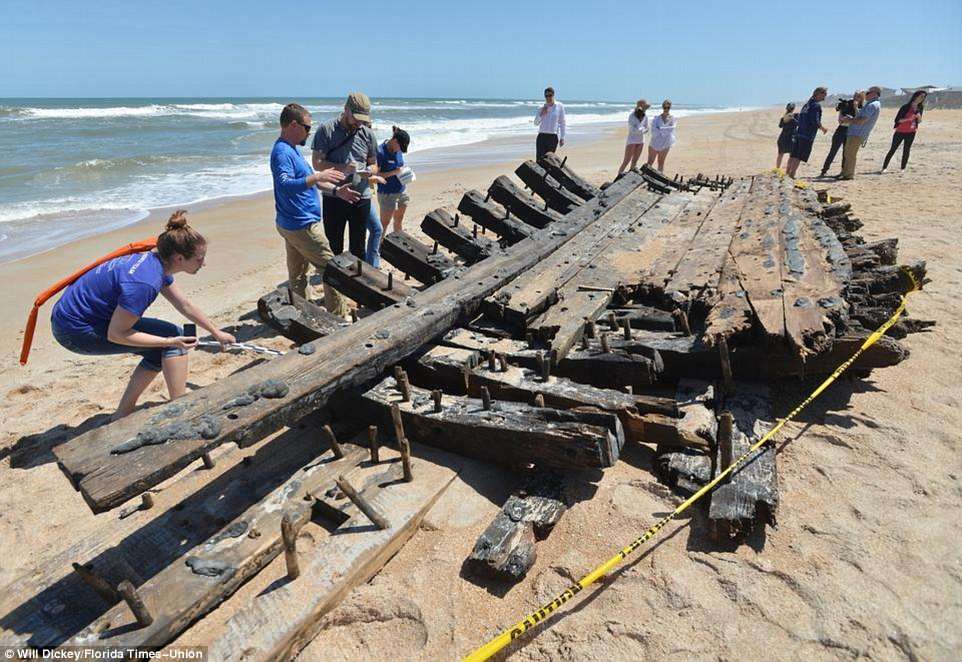 The 48-foot long hull remains on the beach, where only the state of Florida can decide whether to remove it or let it return into the ocean 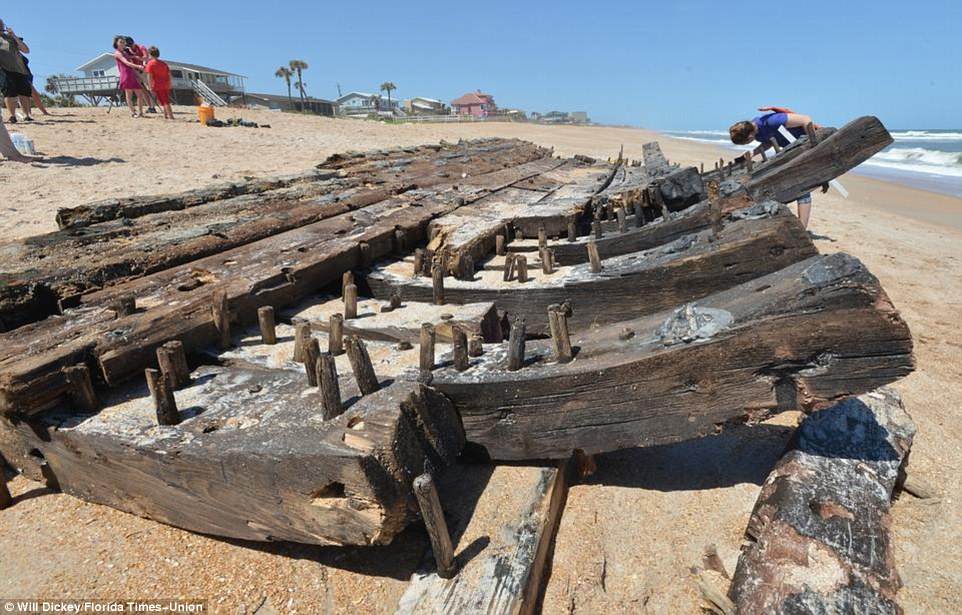 The hull included wooden pegs and copper-covered tacks on the ship, meaning the whole ship was once sheathed in copper

Researchers and maritime experts flocked to the wreckage site to glean as much backstory as they could from the ribs of the wooden hull.

Experts speculate that the wreck may have laid under sand offshore for years, then washed onto the beach due to storm activity, explaining how the ship remained so well preserved.

Local man Marc Anthony, who owns Spanish Main Antiques and proclaims to be a treasure hunter, said the ship appears to be from the 18th century.

‘To actually see this survive and come ashore. This is very, very rare. This is the holy grail of shipwrecks,’ he said to CBS47.

Wooden pegs and nails were visible on the aged wooden beams as well.

Roman numerals carved onto the ribs of the ship were also somehow preserved on the centuries-old ship.

Turner, who discovered the wreck, said she immediately knew she and her son had found a relic from the past.

‘We walked and checked it out and immediately knew it was a historical piece of artifact,’ she said.

‘When I looked out the window, it was immediately a ship,’ her son Patrick said.

Maritime experts on the site said they had long waited for a wreck like this to wash ashore. 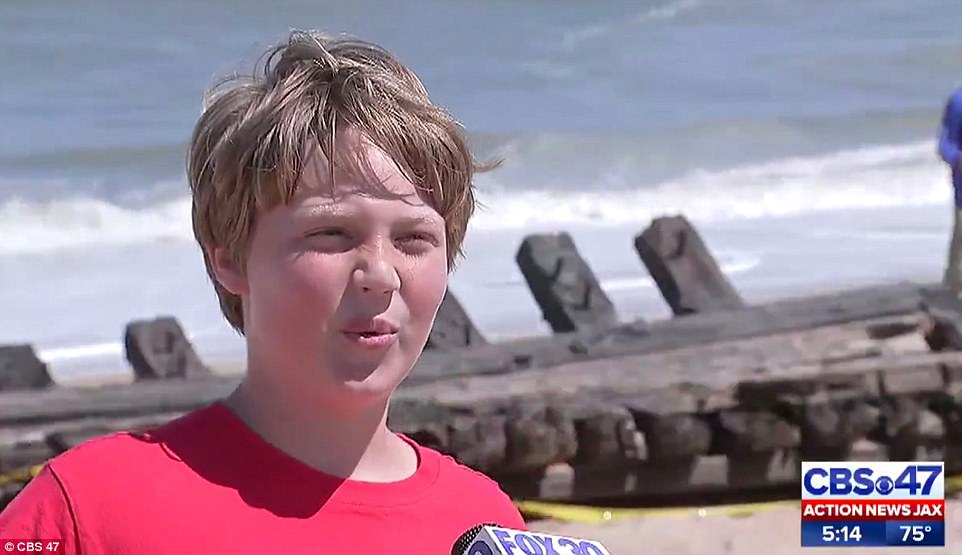 The gigantic shipwreck was discovered by Julie Turner and her son Patrick, eight, pictured above, around 8am Tuesday Experts speculate that the ship must have laid under sand offshore for years, then washed onto the beach due to storm activity, explaining how the ship remained so well preserved 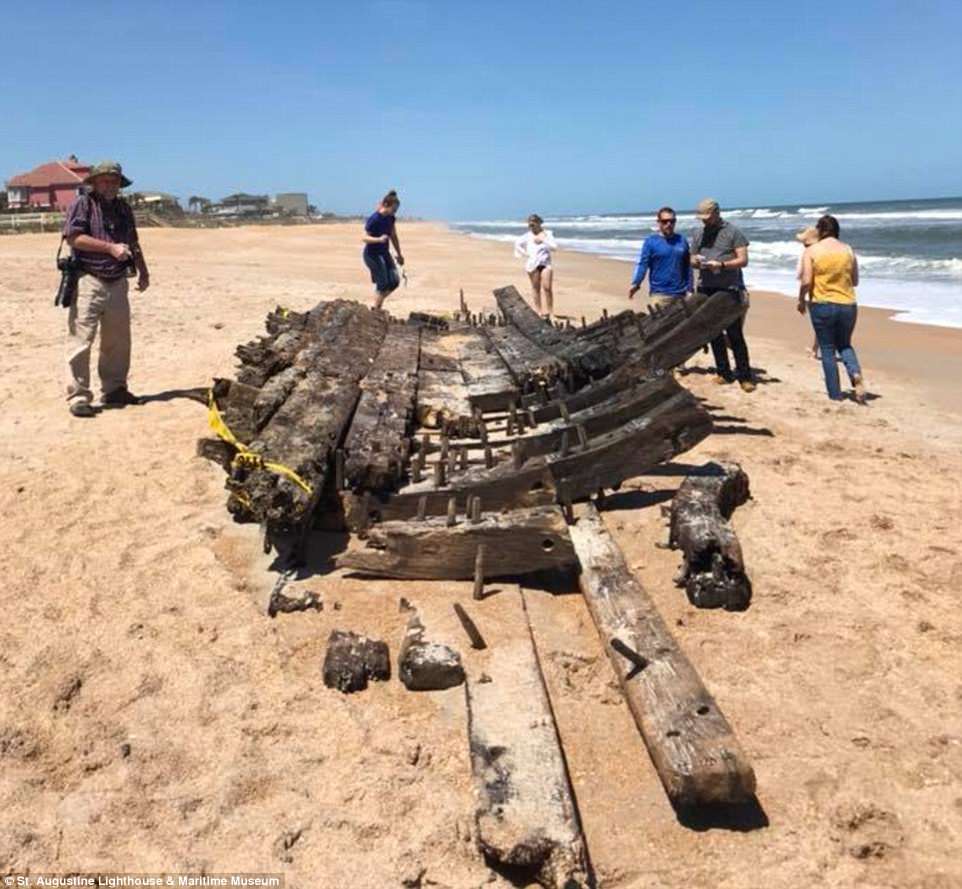 Local antiques expert Marc Anthony said: ‘To actually see this survive and come ashore. This is very, very rare. This is the holy grail of shipwrecks’ as workers measured every inch of the wooden hull, pictured above 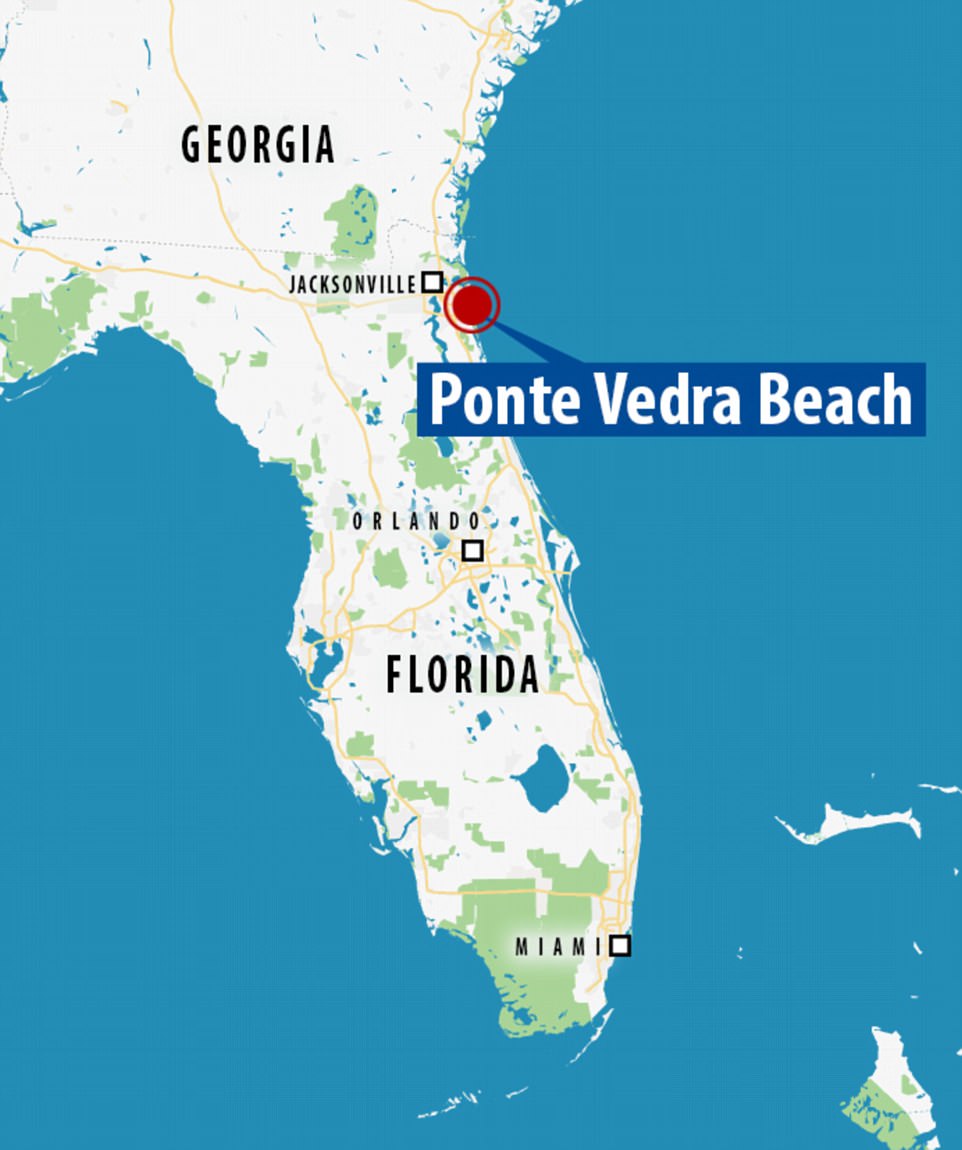 The wreck washed ashore on Ponte Vedra Beach near Jacksonville, Florida, and is yet to be removed from the sand

Maritime historian Brendan Burke believes that the ship could date back to the 1700s.

‘This is what we were born for,’ Burke said to Jacksonville.com on the discovery.

‘It’s really amazing to see somebody’s writing that’s been buried in the ocean for well more than a century,’ he added.

Researchers from the St. Augustine Lighthouse and Maritime Museum measured and photographed the wreck on Wednesday to recreate it as a 3-D model, with the hopes of finding out what the ship may have originally looked like.

It is not yet clear what kind of ship the wreck once was.

‘Taking lots of notes, doing drawings, mapping it out. There are so many details that go into trying to assess the date, where it came from,’ Tonya Creamer of St. Augustine Lighthouse and Maritime Museum said to CBS47.

Three pieces of wood from the wreck also washed on the beach, several yards away.

The maritime experts and locals alike now worry over the state of the ship that is yet to be removed and has already been beat by waves threatening to reclaim it to the deep blue.

Creamer added that it is up to the state of Florida to determine the future of the historic shipwreck.

‘This is state land, state beach area, so we just share our knowledge and our information, what we’re documenting right now, with officials and it’s up to them what to do next,’ she said. 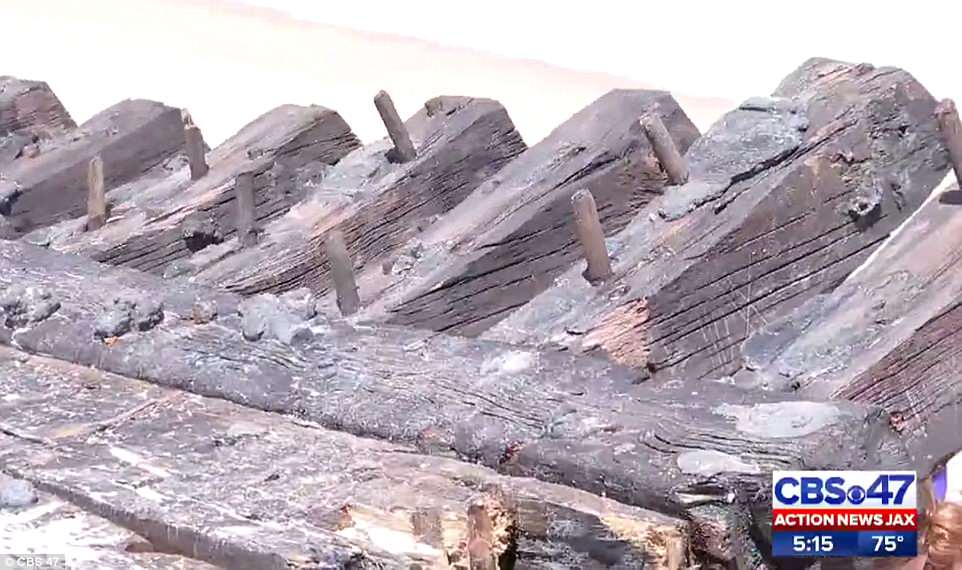 Roman numerals etched onto the ship are still visible in white on the side of the craft’s ribs, pictured above right 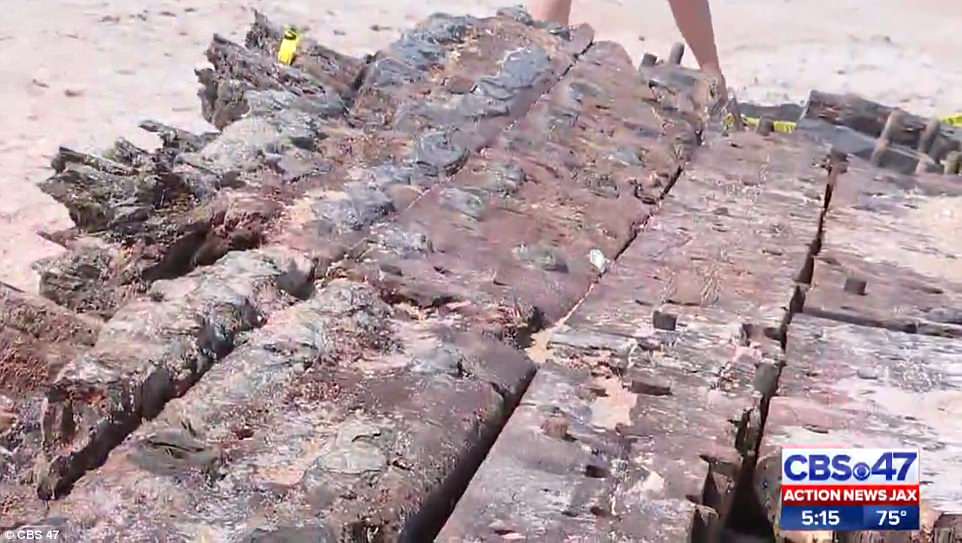 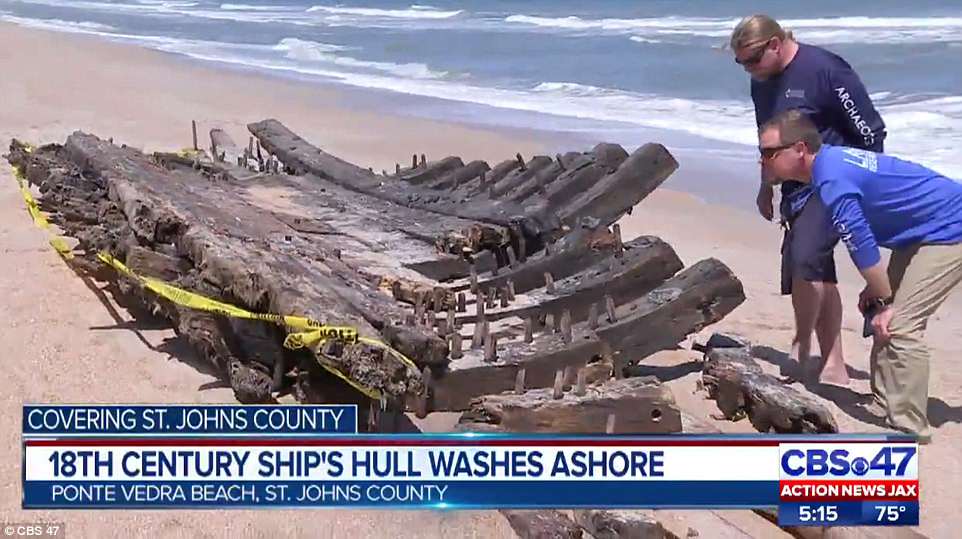 Although most assume the ship hails from the 18th century, one maritime expert speculates it could date back to 1700s 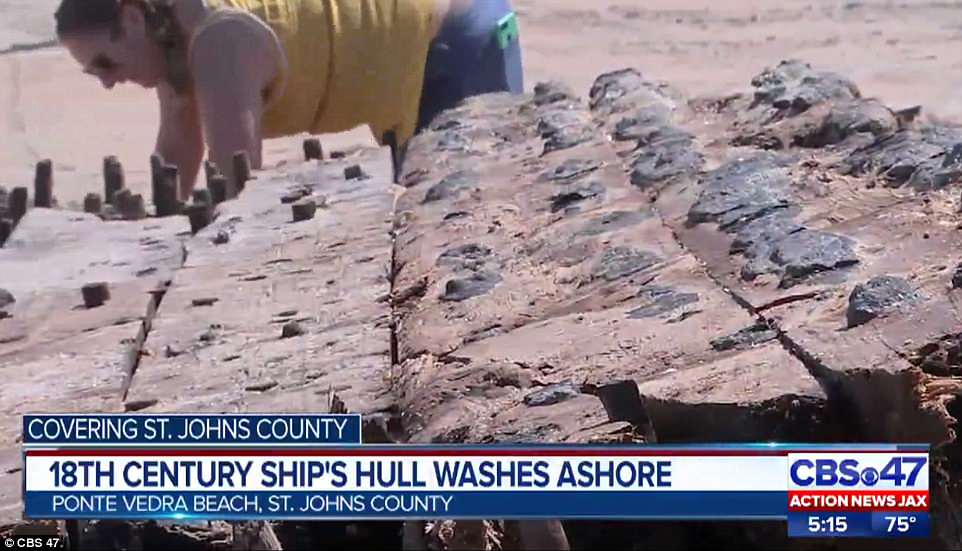 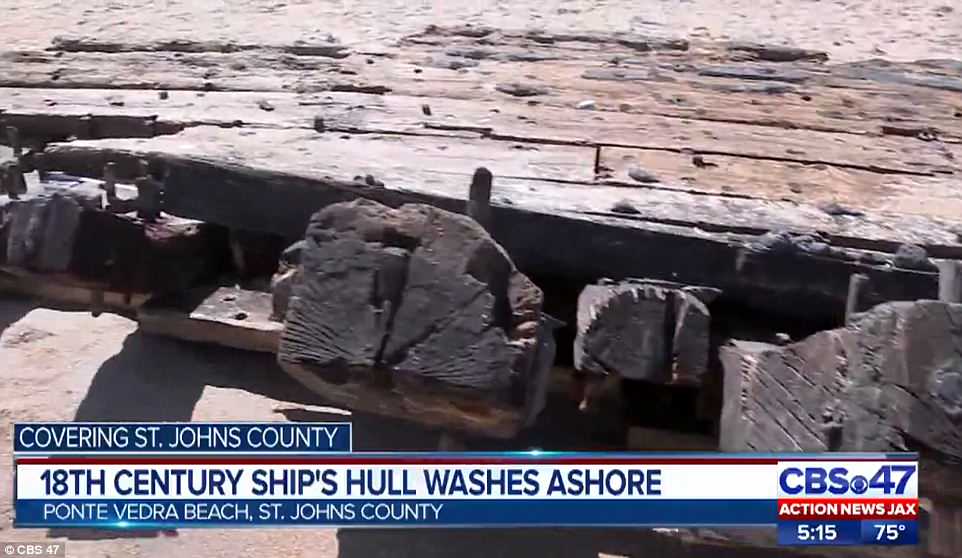 ‘Taking lots of notes, doing drawings, mapping it out. There are so many details that go into trying to assess the date, where it came from,’ Tonya Creamer said on the hull, pictured above on its side