History and meaning of iris flowers

This outwardly austere and proud flower is often compared to an arrow due to its thin and straight stalk. History says that iris flowers appeared on Earth a couple of million years ago and were perhaps the very first flowers.

In Florence, glorious irises conquered all the inhabitants with their beauty and became the emblem of the city.

A little confusion is associated with the heraldic lily of France. Until 1722, in Europe, irises were called lilies, so some historians believe that on the coat of arms of French kings, it was not a lily that appeared, but an iris. Then the flower has a new meaning – power, nobility, and greatness.

In Japan, the iris flower is considered the flower of the military spirit. It is because of the shape of its leaves. For the Japanese, the iris is a symbol of courage, and they believe that iris flowers are the main defender of the house from the evil eye and human insidiousness. Iris flowers are so popular in the Land of the Rising Sun that on the 5th of May, the Japanese will celebrate the Day of Iris (Shobu no Sekku). Another name for the celebration is Boy’s Day. Amulets in the form of iris inflorescences are consigned to give them courage and health. 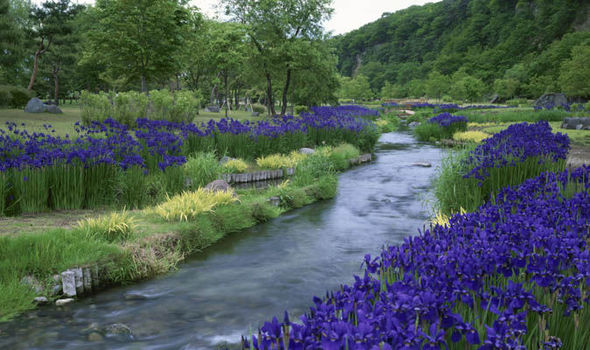 Chinese people believe that the iris flower carries the meaning of beauty and grace, and in Russia, it is the main symbol of purity. In ancient Egypt, the flower became a symbol of eloquence, likewise in Babylon, the power and might of royal power.

The flower itself represents a peaceful family. Iris family belongs to the Asparagaceae from the class of monocotyledons, and under the guise of restraint. It actually hides defenselessness and peace. No wonder the meaning of the iris flower in Christianity is associated with the sufferings of Christ, which served as the cultivation of irises in monasteries.

Iris is a rainbow creature

Nowadays, these beautiful creations of nature symbolize friendship, loyalty, and respect so that they can be given to everyone without exception – loved ones, friends, relatives, and even superiors.

Irises have been famous since ancient times, so the description of the iris is often found on the frescoes of Ancient Egypt, Assyria, and Babylon. Then they personified the strength and unwavering power of the royal house and were called to inspire reverence for the subjects.

The meaning of the iris flower comes from its Greek name ἶρῐς (rainbow), which is associated with the ancient Greek goddess Irida. It is interesting to know that the author of this name was Hippocrates himself.

Legends say, being the patroness of the rainbow, Irida always went down to Earth to transmit messages from the gods to people. Later, the Ancient Greeks began to plant purple irises on the graves of women, so that Irida, the goddess, saw their bright petals and escorted them to reach heaven. So irises began to mean a transition from one state to another. Their image is still used in meditation and spiritual practices.

The brightness of colors, uplifting

The beauty of the iris lies in the original structure of the flower: its fused petals form a tube with six fancifully bending tips. The magnificent color scheme is represented by all shades of the rainbow, from which looking at them involuntarily, you begin to enjoy life. Beauty, splendor, & unpretentiousness characterize the flowers of the iris, the value of which has always been interpreted as reliability, loyalty, and sincerity.