Hit and run suspect, 30, arrested as victim, 56, fights for her life

‘We are praying for her’: The victim has been named as Cihan Sakine

A 30-year-old man has been arrested after a suspected hit-and-run collision between a cyclist and a pedestrian left a woman fighting for her life.

The man was detained at an address in Islington, north London, on suspicion of causing bodily harm, failing to stop and failing to report a collision after contacting police at about 11pm on Wednesday, Scotland Yard said.

Officers are continuing to appeal for information over the incident on Kingsland High Street in Dalston, east London, on Tuesday evening when a female pedestrian was knocked over by a cyclist on an electric-assisted bike.

The woman, 56, remains in hospital with life-threatening injuries, police said.

The injured pedestrian, has been named locally as Cihan Sakine, 56.

She was crossing the road when she was struck at around 5pm on Tuesday.

The cyclist involved in the collision in Dalston, East London, initially stopped after he was thrown from his electric bike but then fled moments later. 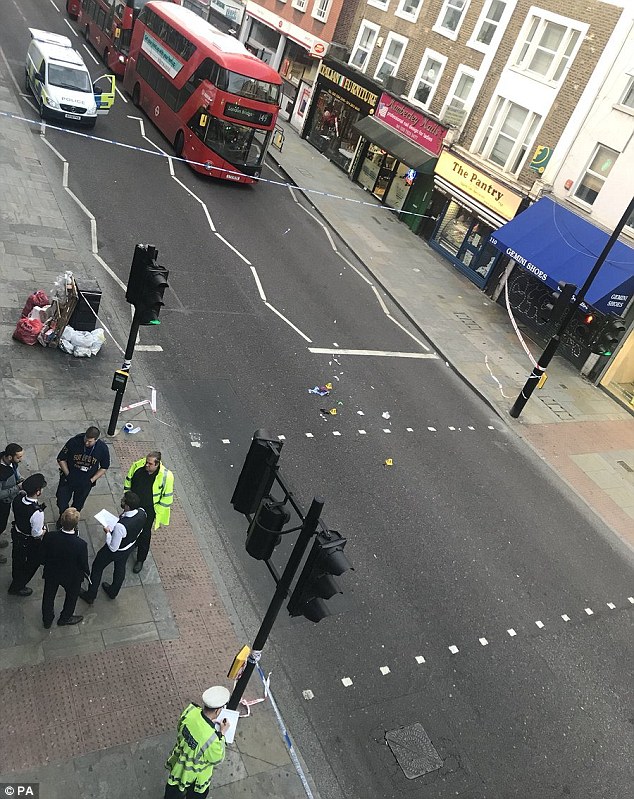 Pictured: Emergency services closed off Kingsland High Street on Tuesday after a woman was mown down by an electric bike

The victim was taken to hospital and remains on life support. It follows a number of fatal collisions between cyclists and pedestrians in recent years.

Kim Briggs was killed in February 2016 after cyclist Charlie Alliston crashed into her as she crossed the road on her lunch break. 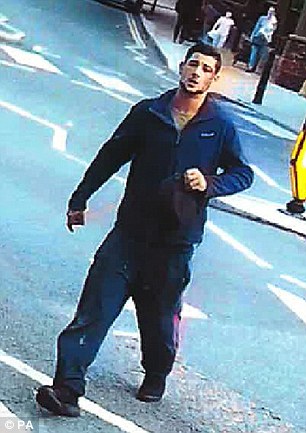 Alliston was acquitted of manslaughter in September last year but convicted of causing bodily harm ‘by wanton and furious driving’ – an 1861 law relating to Victorian carriage driving.

Mrs Sakine, who came to Britain from Turkey 20 years ago, is well-known in the Turkish community in Dalston.

One concerned friend, who did not want to be named, visited her at the Royal London Hospital in Whitechapel, East London, on Tuesday night.

‘We are all praying for Cihan but the doctors said she is in a bad way and we are all hoping she can pull through,’ the friend said. ‘She is very poorly and things do not look good at the moment.’ Last night police were looking for CCTV images of the cyclist, who is said to have worn a red top and jeans.

His red bike was found over an hour after the crash, abandoned near an alleyway around a mile away in Stoke Newington.

Caleb Grab, 30, who witnessed the horrific crash, said: ‘Two cyclists were trying to dodge her but one hit her at the crossing. He must have been going at some speed to do that much damage.

‘One of the cyclists was bleeding from the head and dazed but only wanted to get out of there. He didn’t say anything and ran away pulling his bike with him.

‘People were telling him to wait for the police and get treatment. They tried to stop him.’

Emergency services arrived within minutes but were too late to catch the cyclist. 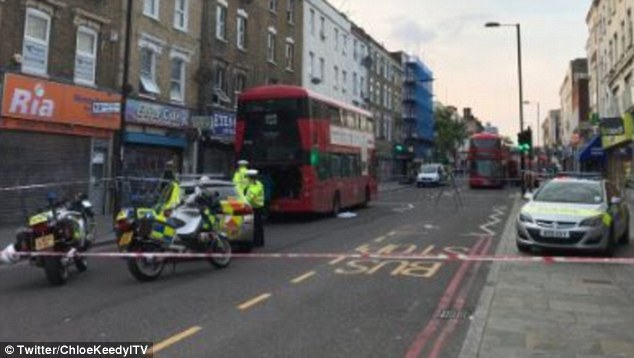 Police hunt: Officers want to trace the cyclist and are appealing for anyone with information to come forward

Another witness, who asked not to be named, said he ‘heard a bang’ and thought there had been a car crash because of the sound.

Detective Constable Darren Case, of Scotland Yard’s serious collisions investigations unit, has appealed for more witnesses to come forward in a bid to find the cyclist.

Detective Constable Darren Case, Serious Collisions Investigations Unit [SCIU] said: ‘This is a shocking incident as it appears the cyclist involved did not stop to assist the victim or contact the emergency services, instead making off.

‘We need to hear from anyone who was in the area at the time. Did you see the cyclist before, during or after the collision? Maybe you are in possession of dash cam footage or filmed the cyclist on your mobile phone as he made off, if you did it is vital that you make contact with us.

‘We are also appealing directly to the cyclist along with his friends and family who may know of his whereabouts, the pedestrian has suffered life threatening injuries as a result of this collision and it is important that you do the right thing and make contact with police.’