A Thai man who allegedly murdered his sister and her British millionaire husband was taken to the crime scene today to show police how he carried out the slaughter.

The bodies of Alan Hogg, 64, and his wife Nott, 61, were yesterday found in the garden of their mansion in Phrae, northern Thailand after a six-day search.

Police initially said Nott’s brother, Warut Satchakit, paid three assassins to take them out after family feuds over money – but today detectives said he admitted carrying out the murders himself with the help of two paid accomplices.

This morning, two of the alleged killers were taken to the house to show police what happened and pointed to the spot where they buried the bodies.

Detectives said Satchakit confessed to beating his sister Nott with a hammer in the garage while Kittipong Kamwan, 24, held her down.

The third man Phia Kamsai, 63, then blasted Alan with a shotgun in the garden after  Satchakit paid him £1,175, police said.

Satchakit and Kamwan were taken to the house in Phrae, northern Thailand, and shown the two-metre deep grave where they buried the bodies.

Kamsai, 63, arrived separately and was pictured sitting outside Satchakit’s house in a white T-shirt. 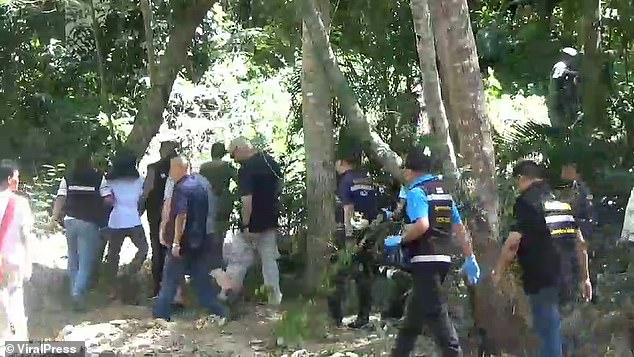 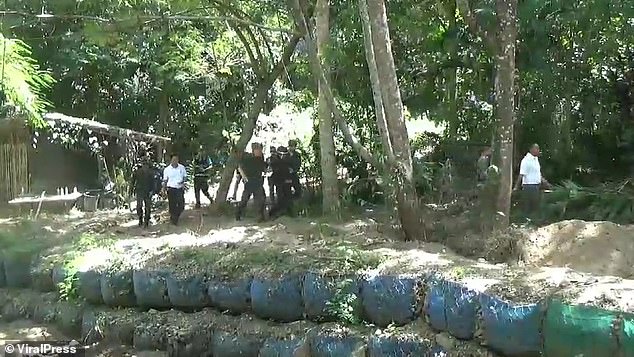 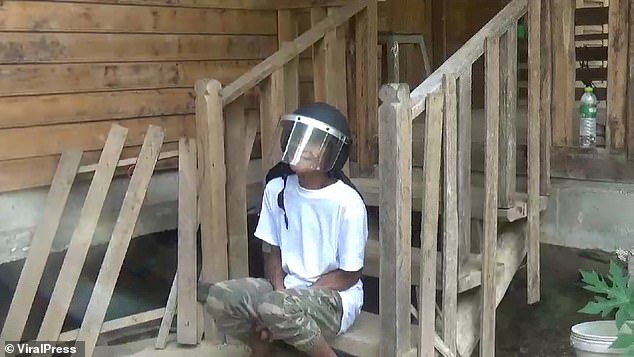 Kamsai, 63, arrived separately and was pictured sitting outside Satchakit’s house in a white T-shirt 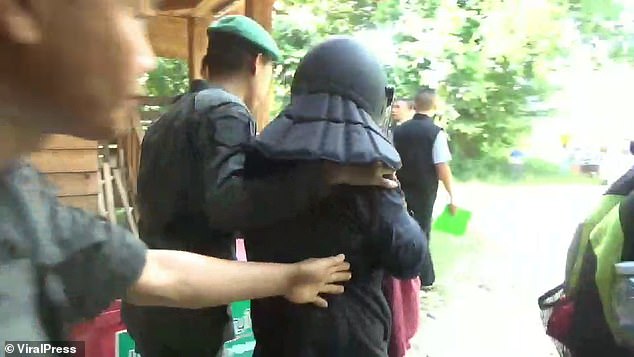 In the video, Satchakit (pictured), in a black top and jeans, is seen in handcuffs pointing to the hole 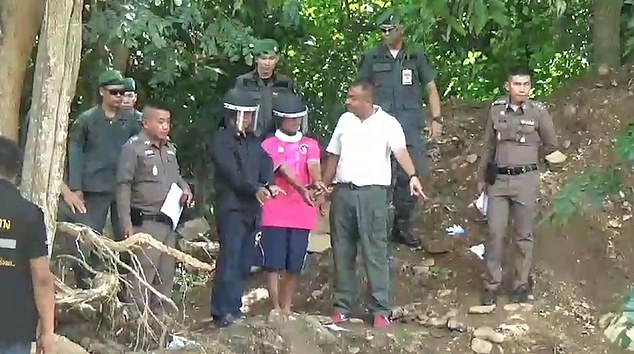 This is the moment one of the alleged assassins, Kittipong, pointed to where the bodies were buried

In the video, Satchakit, in a black top and jeans, is seen in handcuffs pointing to the hole. He is then joined by the younger man Kittipong in pink shirt.

The group used Mr Hoggs’s own digger to make a deep hole before they dumped the bodies on September 18 at 8pm.

The brother-in-law stopped and was grilled briefly by reporters but covered his mouth with his shirt and did not speak. He was then bundled into a police truck.

Police Lieutenant General Poonsap Prasertsak said all three men had now been charged with premeditated murder. They will be held in custody while prosecutors prepare the case.

Lieutenant General Poonsap added: ‘Today the suspects returned to the scene to show how they buried Alan and Nott. All three men pointed to the scene.

‘The interrogation has progressed and all three men have now confessed. The motive for this incident was personal problems between Mr Warut and his sister and her husband. 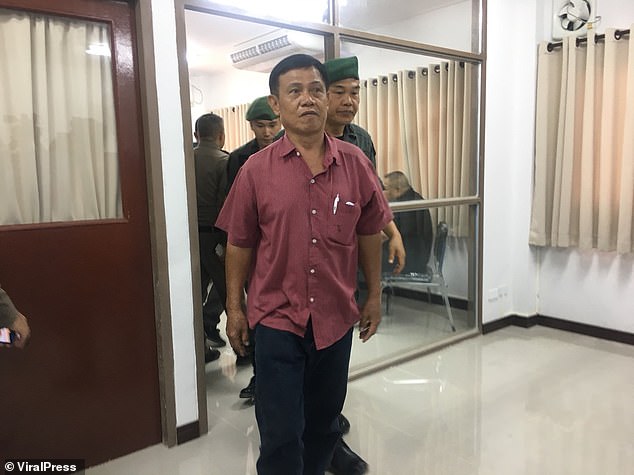 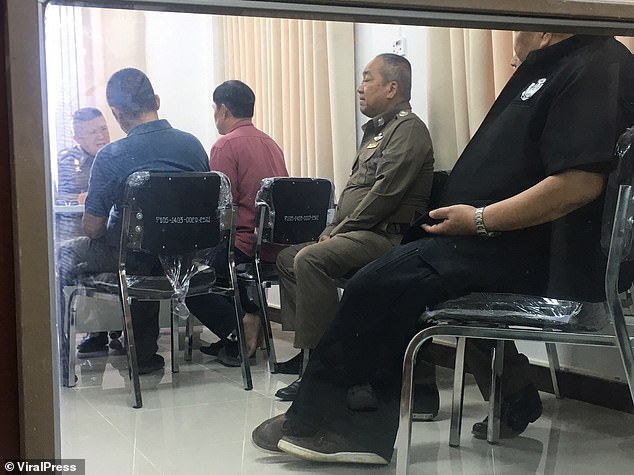 Satchakit (pictured in mauve) speaks to police following his arrest this morning. He was arrested along with two friends following the death of his sister Nott and brother-in-law Alan Hogg 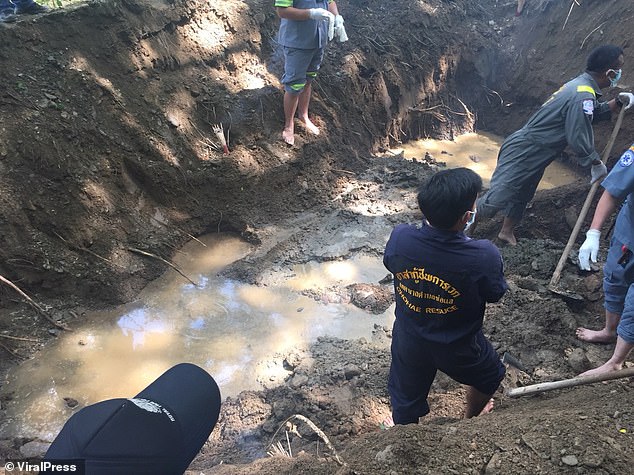 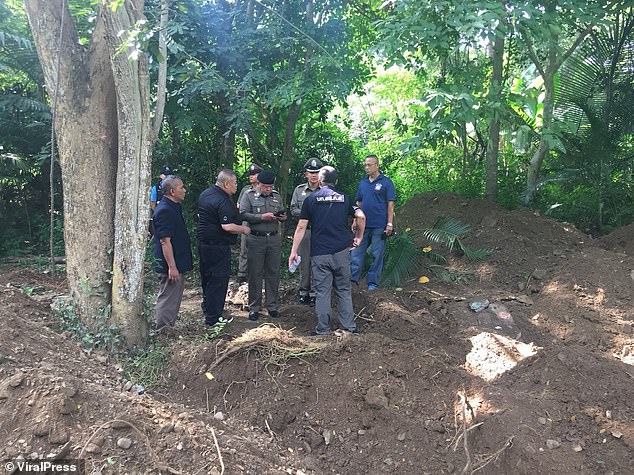 The bodies were found buried two metres deep behind a duck pond in the 32-acre grounds of the mansion owned by Alan Hogg, 64, and his wife Nott, who have been missing since last Thursday

Satchakit was arrested along with two friends yesterday morning and images show the 63-year-old in custody.

The bodies were found by sniffer dogs two metres deep behind a duck pond outside their home.

They were excavated at 12pm local time and have been sent to hospital for post mortem examinations.

Mr Hogg, from Edinburgh, was the director of a laundry company in the UK and had moved to Thailand several years ago.

His daughter Robyn Hogg, a 31-year-old production assistant, flew to Thailand from the UK when she found out her parents were missing. She is yet to comment on the tragedy. 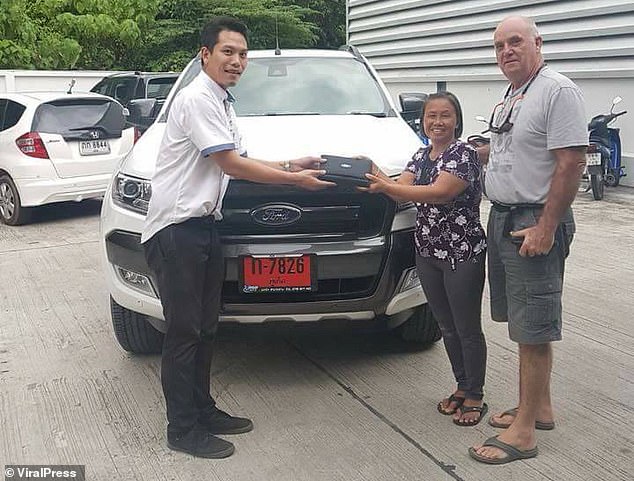 Alan Hogg (far right), 64, and wife Nott, 61, with their brand new pick-up truck, which was stolen when they disappeared 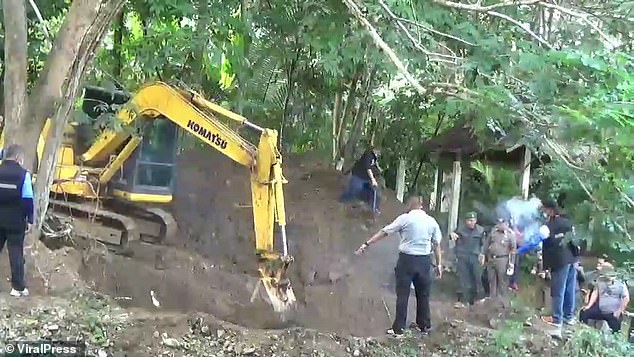 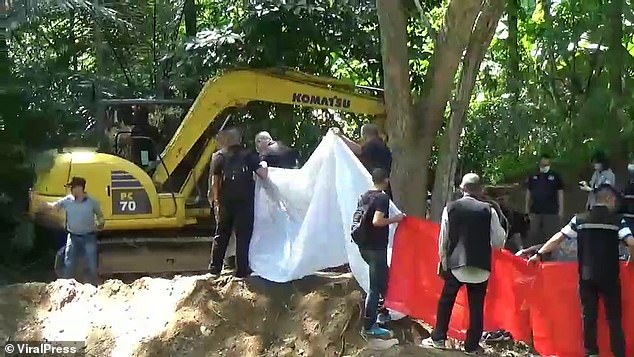 The bodies were found by sniffer dogs two metres deep behind a duck pond outside their home in Phrae, northern Thailand. Pictured: Police at the scene 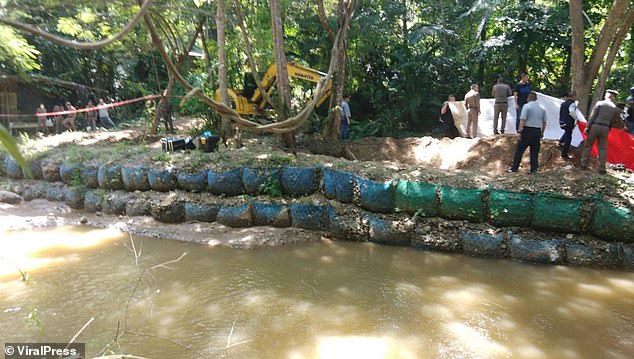 Police arrested the hitmen on Tuesday after they linked them to Mr Hogg’s stolen pick-up truck which was found and forensically examined yesterday.

They hitmen confessed to the murder and burying the corpses, police said.

Officers arrived at the home today at 10.30am and used an excavator to dig an area next to the duck pond in the 32-acre grounds of Mr Hogg’s gated three-storey home, which boasts a swimming pool, summerhouse, a cattle farm and geese.

The corpses were later found in a two-metre deep grave with their shoes still on. 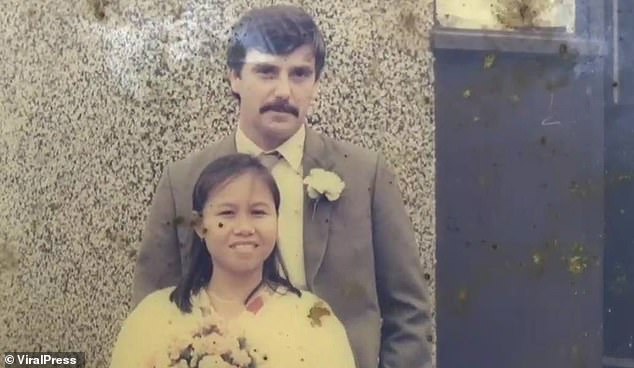 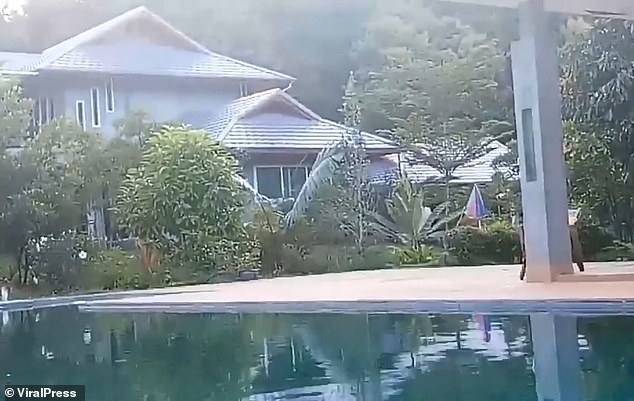 Businessman Alan Hogg, 64, and his wife Nott, 61, were reported missing on Thursday. Pictured: Their home in Thailand 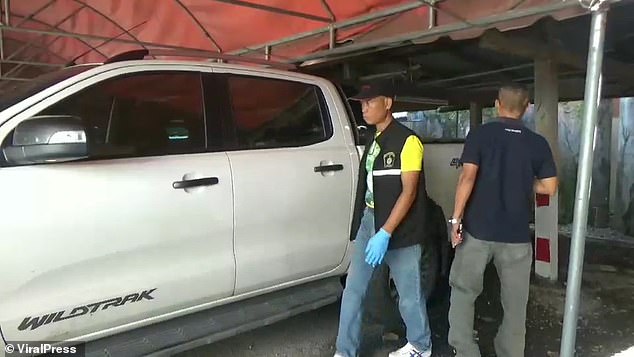 Forensic police check the car of Alan Hogg, 64, after it was stolen and recovered

Warut was initially arrested for stealing the couple’s brand new white Ford Ranger pick-up truck and was arrested again after the assassins named him.

Investigators found that the truck had been sold to nearby hill tribe people for £4,600 who then sold it to a man from Laos for £9,800 in Sukhothai last Friday.

The man, from Laos, then drove it to Ayutthaya on a business trip, until he saw reports that police were looking for the vehicle and he contacted authorities. 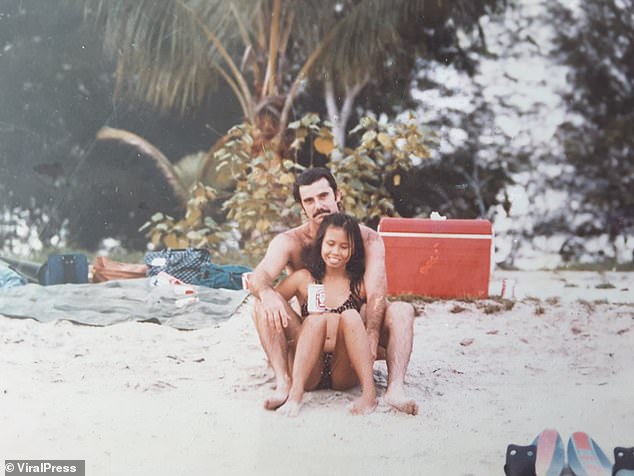 The wife’s brother, Warut Satchakit, was arrested over the disappearance. Pictured: The couple together 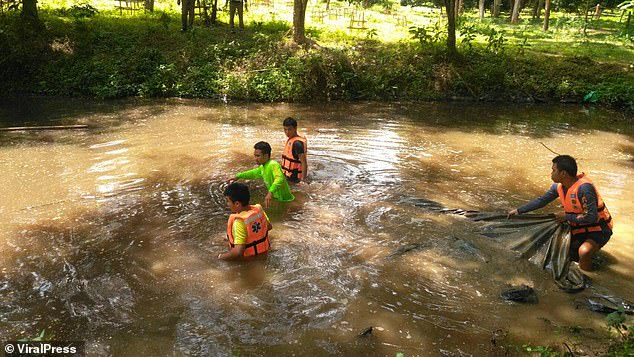 Blood was found on the walls of Mr Hogg’s swimming pool changing rooms with signs someone had tried to wipe it away. Pictured: Police divers search for them 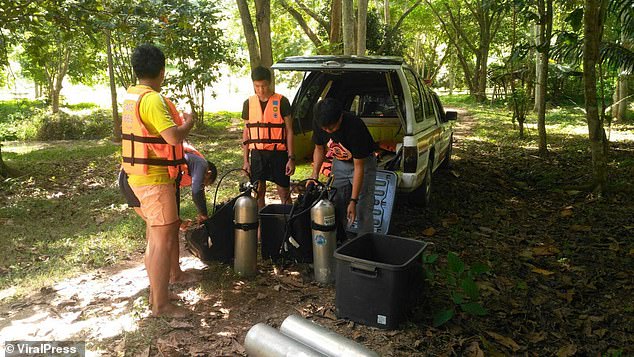 Mr Hogg, originally from Edinburgh, Scotland, arrived in Thailand several years ago having worked as an engineer in Australia. Pictured: Police divers

The man turned the truck over to police in Ayutthaya on Sunday. He and the two sellers were then taken to Phra That Chor Hae police station to be interrogated.

Officers began searching the grounds yesterday with sniffer dogs. They found a gardening hoe and a freshly dug hole – but they did not find the bodies until Tuesday.

The couple were initially reported missing last Thursday when friends had unsuccessfully tried to contact them on messaging app Line.

Blood stains, with signs someone had tried to wipe them away, were found in the swimming pool changing rooms. A phone had been left charging in the living room.

Mr Hogg, a former engineer, had been involved with several businesses in the UK and was an active director of a laundry company in Bonnyrigg, Edinburgh.

He and his wife travelled regularly to Australia, where Mr Hogg previously worked in offshore construction, for lengthy holidays.

Neighbours described his wife as ‘the most beautiful woman in the town’ and said that Mr Hogg was ‘very friendly’ and often helped them. They told local media that he was a ‘millionaire’. 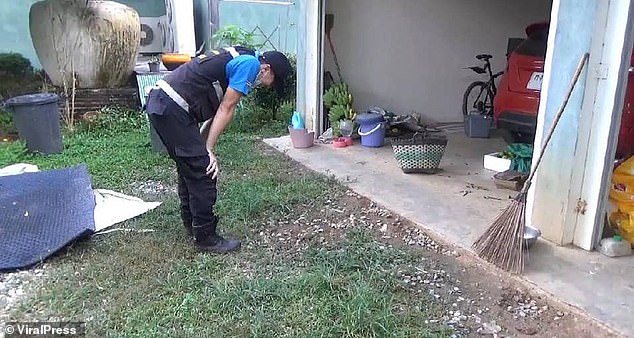 Neighbours described Mr Hogg’s wife as ‘the most beautiful woman in the town’. Pictured: A police officer examines clues at the scene 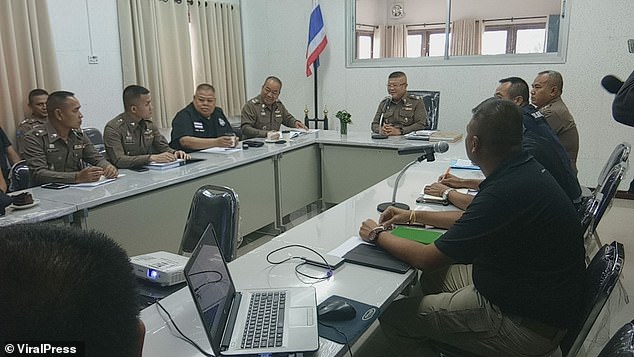 Mr Hogg’s brother-in-law denied any involvement in their disappearance. Pictured: A meeting to discuss the case 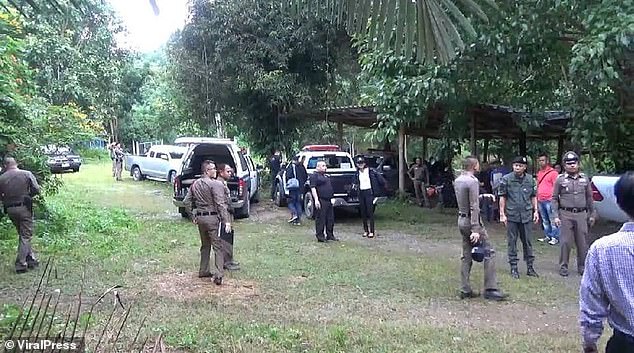