Aaron Sutcliffe, 29 was diagnosed with HIV in 2008 but failed to tell this to his two victims

An HIV sufferer who knowingly infected two mothers with the virus ‘took the coward’s way out’ as he remained silent about his condition, a court heard today as he was jailed for nearly seven years.

Aaron Sutcliffe, 29, of Fleetwood, Lancashire, was diagnosed with HIV in 2008 but failed to tell this to his two victims, who both remain terrified they will pass on the virus to their children.

One of the women told Preston Crown Court that Sutcliffe, who admitted two counts of inflicting grievous bodily harm, had ‘condemned’ her to a ‘life sentence’.

Sentencing him to six years and nine months in jail, Judge Philip Parry told Sutcliffe that he had had a ‘moral and legal obligation’ to bring his status to the attention of any potential sexual partner.

The judge added: ‘Underscoring your callous nature you laughed at her, telling her not only did you have HIV but that she probably would have it now too.’

He said: ‘You wilfully and deliberately withheld your status to two women that you professed to care for.  That was deceitful, calculated and manipulative. You took the coward’s way out, kept your silence and infected them. You had no right to do so. 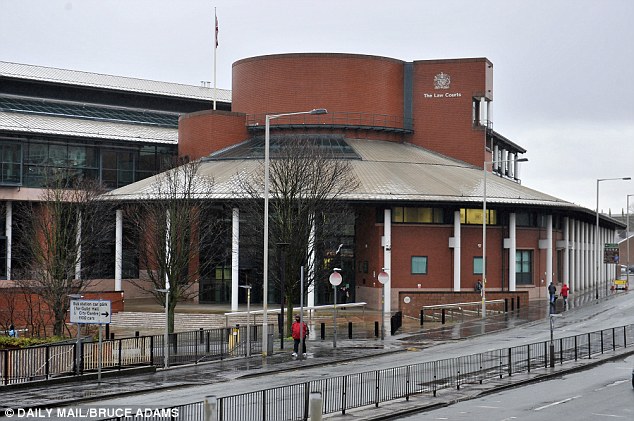 ‘You bore an overwhelming responsibility for your own selfish actions which have left such devastation in your wake.’

Judge Parry also imposed a sexual harm prevention order on Sutcliffe which – until further notice – prohibits him from engaging in lawful sex with another person unless he has told them he has HIV and they understood and acknowledged the disclosure.

Previously, Sutcliffe was subject to an order which required him to provide contact details of partners to Lancashire Police’s public protection unit and then wait for written approval before having intercourse wearing a condom.

The court heard Sutcliffe was not classed as a dangerous offender but poses a high risk of reoffending by not telling partners about his condition.

The two offences took place on various dates between 2009 and 2016. Sutcliffe was said to have had ‘ample opportunity’ to reveal all to his first victim before she began hearing rumours that he had HIV.

Even when confronted, the court heard, he continued to feign ignorance as he agreed to taking a test and then tricked the woman into believing they received their diagnoses at the same time.

Sutcliffe’s second victim contracted the virus after he complained he was struggling to put a condom on.

She told the court that Sutcliffe had robbed her of ‘precious early months of bonding’ with her child as she took to wearing gloves to feed and change the infant.

She added he had condemned her to a ‘life sentence’. In mitigation, Sutcliffe was said to have a background of alcohol and drug abuse, and had been referred to mental health services on numerous occasions but often disengaged.

He claims he was infected himself by a man who sexually abused him and the allegation is currently under police investigation, the court heard.

Detective Constable Emma Shuttleworth, of Lancashire Police, said: ‘Aaron Sutcliffe had numerous opportunities to tell both of his victims that he was HIV positive and he failed to do so.

‘His intention may not have been to harm but he has been as reckless as it is possible to be and he has demonstrated a flagrant disregard for the health of these two women, whose lives and the lives of their families have been changed irrevocably through his actions.’