The only body recovered after the nation’s greatest maritime disaster has been identified 80 years after HMAS Sydney was sunk in a World War II naval battle.

All 645 officers and crew aboard the Sydney were lost when she was attacked during World War II by the German raider Kormoran off the coast of Western Australia.

The action on November 19, 1941 in which both vessels were sunk remains the most grievous loss in the history of the Royal Australian Navy.

The wrecks of HMAS Sydney and HSK Kormoran were not found until 2008, solving one great mystery, and now another has been solved by DNA technology.

The only body recovered after the nation’s greatest maritime disaster has been identified 80 years after HMAS Sydney was sunk in a World War II naval battle. The sailor’s remains are buried at Geraldton War Cemetery under a gravestone which says ‘Known Unto God’ (pictured) 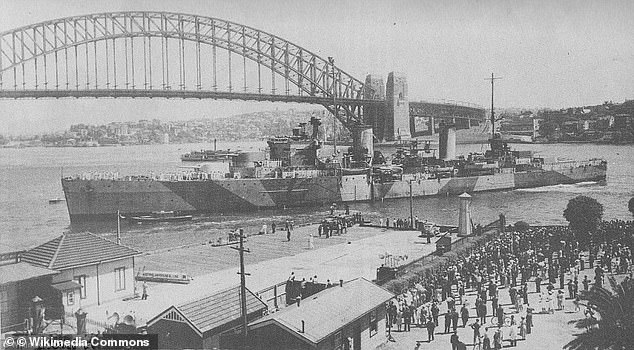 All 645 officers and crew aboard HMAS Sydney (pictured) were lost when she was attacked during World War II by the German raider Kormoran off the coast of Western Australia. The action in November 1941 remains the greatest loss in the history of the Royal Australian Navy 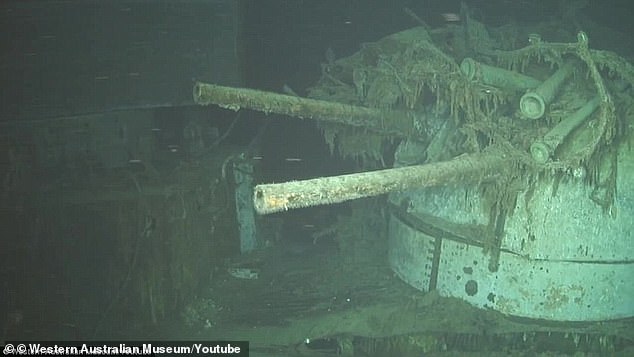 The wrecks of Sydney and Kormoran were not found until 2008, solving one great mystery, and now another has been solved by DNA technology. Some guns were found relatively intact (pictured) on the wreck of Sydney while other armaments were destroyed in battle

Almost three months after HMAS Sydney went down, on February 6, 1942, the body of one of the light cruiser’s sailors was found on a life raft at Christmas Island.

The sailor had suffered a shrapnel wound to the head but naval investigators were never able to identify his remains.

He was described as having blue eyes and blond, light brown or read hair and was wearing blue overalls, suggesting he was not an officer.

The sailor was originally buried on Christmas Island and exhumed in October 2006 to be reburied near Geraldton’s Dome of Souls memorial to HMAS Sydney.

Before his remains were reinterred in November 2008 bone and dental samples were taken to extract DNA in a last bid to put a name to the unknown hero. 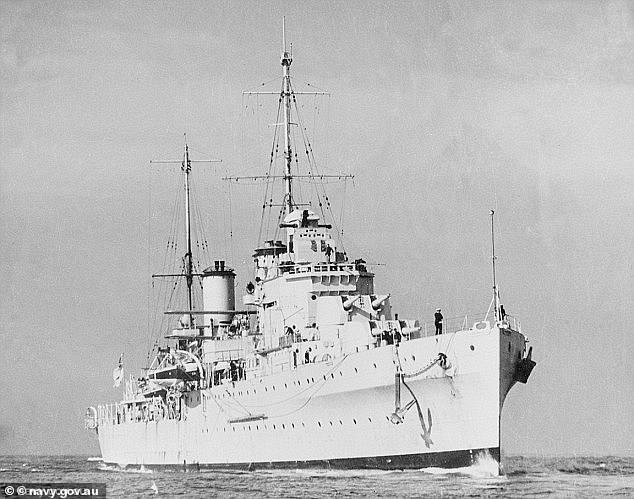 HMAS Sydney (pictured) went down in the Indian Ocean off the coast of Western Australia after an intense battle with German merchant vessel Kormoran, on November 19, 1941

The Navy appealed to relatives of those killed on the Sydney to come forward for DNA tests and were able to use other records to eliminate more than 500 candidates.

It has now been reported a match has been found and the sailor’s identity will be revealed to coincide with the 80th anniversary of HMAS Sydney’s sinking on Friday.

‘A DNA result has shown a positive match,’ a source told Nine Newspapers. ‘There is DNA which matches the unknown sailor.’

Many of the sailors on the Sydney were young – some only teenagers – and direct relatives who could have provided DNA samples are long deceased.

However, recent advances in DNA technology have made the success of such searches more likely.

Previously, researchers relied upon mitochondrial DNA to trace maternal ancestry, meaning they had to locate a female relative of the unidentified person.

Y-DNA testing now allows tracing to be done through a person’s paternal line, widening the circle of potential relatives from whom a matching sample might be found. 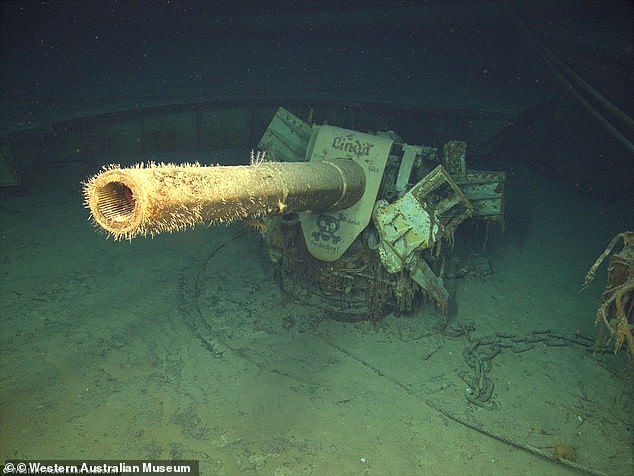 A gun named ‘Linda’ (pictured) marked with a skull and cross bones is pictured on the wreck of the Kormoran. Weapons were often named by German sailors during World War II 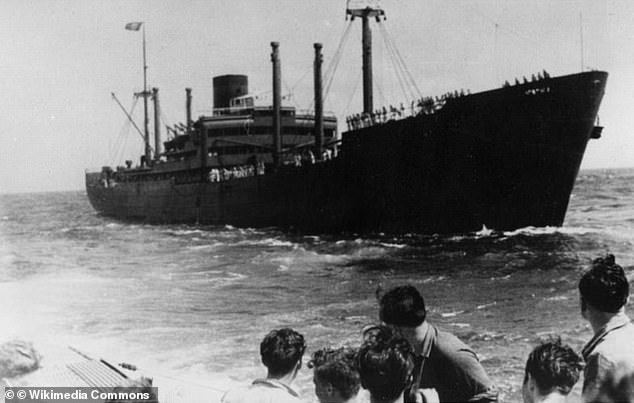 By the time the crew of HMAS Sydney realised they had encountered an enemy vessel it was too late to successfully defend the ship. More than 80 sailors from the Kormoran also died in the battle

A Department of Defence spokeswoman declined to comment but Daily Mail Australia understands an announcement on the identity of the unknown Sydney sailor is imminent.

A spokeswoman for the Department of Veterans’ Affairs, which oversees the Office of Australian War Graves, said Defence handled the identification of military personnel remains.

‘However if Defence do announce the identity of this HMAS Sydney sailor, the Office of Australian War Graves may then be involved in a commemoration,’ the spokeswoman said.

That would likely include changing the inscription on the unknown sailor’s grave to include his name.

The Australian War Memorial describes the sinking of HMAS Sydney and the terrible loss of her crew in detail on its website. 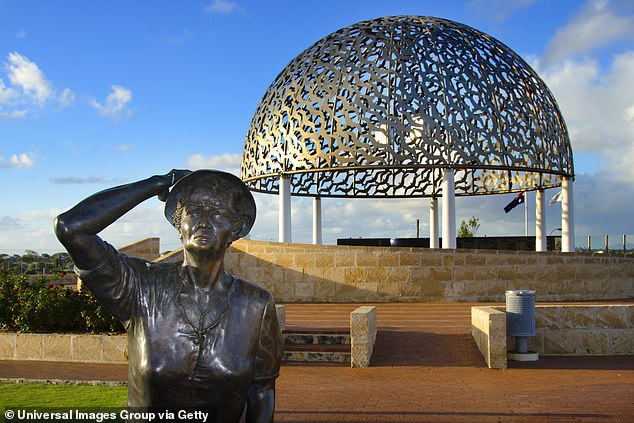 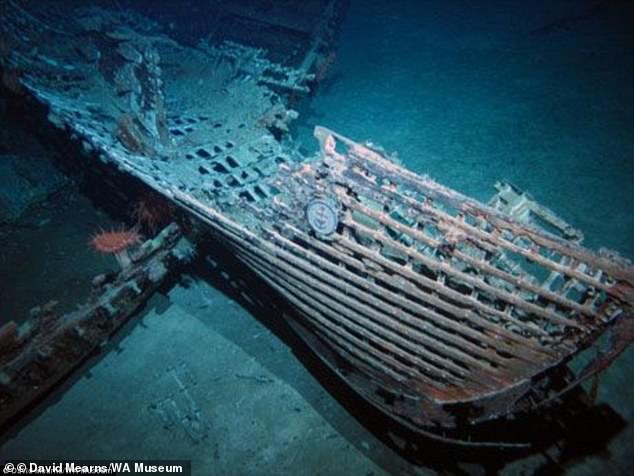 ‘The circumstances of the Sydney-Kormoran action contain dramatic elements which have continued to attract public attention for over half a century,’ it states.

HMAS Sydney was an ‘outstandingly successful warship’ which had won major battle honours, ‘aesthetically elegant’ and the most famous vessel in the RAN.

Kormoran, an auxiliary cruiser, had been converted from a freighter and disguised as a merchant ship but was well armed with guns, torpedoes and mines.

The two ships met off the Western Australian coast on the afternoon of November 19, 1941 when Kormoran’s disguise lured Sydney in too close. The Australian ship was hit by a torpedo and repeatedly shelled.

‘However, although mortally hit, the Sydney was able to fight back and ensure the raider’s destruction before limping slowly away to her own fate and that of her crew,’ the AWM states.

‘With the complete loss of the Australian cruiser’s crew the only accounts of the action are from the Kormoran’s survivors. 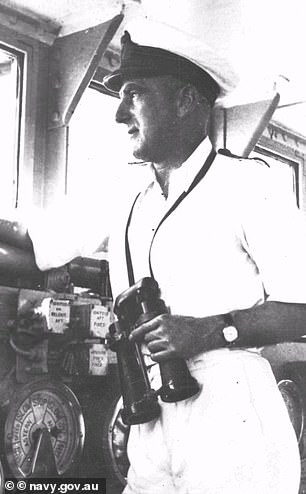 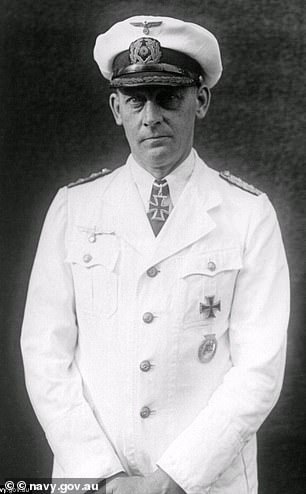 ‘Regrettably these circumstances led to the circulation of many rumours, accusations and conspiracy theories, which have no basis in fact and supporting evidence.’

Those rumours included debunked stories that a Japanese submarine was involved in the Sydney’s sinking and that Australian survivors were killed in the water to eliminate witnesses.

More than 80 sailors from the Kormoran also died in the battle.

The wrecks of HMAS Sydney and HSK Kormoran were finally found 112 nautical miles off Steep Point, 670km north of Perth, in March 2008.

The Navy took descendants and other family members of those who died on the Sydney to lay wreaths at the site where their men perished.

The fourth Australian warship to bear the name HMAS Sydney fired a gun salute over where her predecessor lies and another wreath commemorated the German dead.

A national service or remembrance was held at Sydney’s St Andrew’s Cathedral where the bell tolled 645 times for the lost sailors. 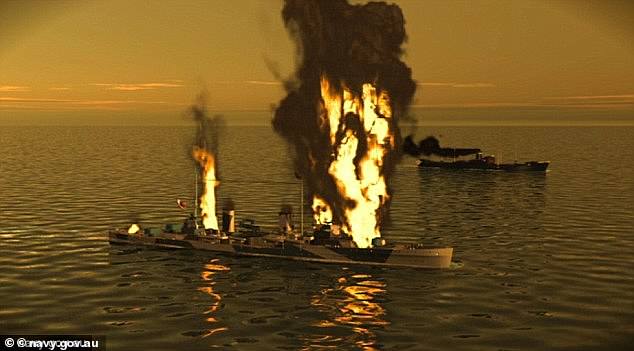 The sinking of HMAS Sydney was Australia’s biggest and bloodiest wartime mystery, giving rise to a series of conspiracy theories (pictured is a digital reconstruction of the battle)