One of Australia’s greatest mysteries has finally been solved thanks to advances in DNA technology, with the ‘Unknown Sailor’ finally identified exactly 80 years after he died.

Thomas Welsby Clark was just 21 years old and an able seaman on HMAS Sydney when it was sunk on November 19, 1941, about 200km off Western Australia.

He had trained as an accountant in Brisbane, then served in the army before finding a berth on HMAS Sydney.

It was Australia’s worst maritime disaster, with all 645 people aboard dying in the attack by the German auxiliary cruiser Kormoran.

His remains washed up on Christmas Island, 2,600km north-west of Perth, 11 weeks after the HMAS Sydney was lost, and it was all that was ever found of the crew.

But who he was would remain a mystery for another 80 years.

His name would probably still be unknown were it not for the tenacity of a woman determined to find out who he was.

Glenys MacDonald has spent more than 20 years trying to give the Unknown Sailor the dignity of having a name.

That she finally succeeded is down to her hard work, Chief of Navy Michael Noonan and advances in DNA technology.

Mr Clark’s unidentified body was buried on Christmas Island before the Australian outpost was evacuated and the Japanese took it over.

They destroyed the local record records and the gravesite was lost.

But decades later, a former Christmas Island local named Brian O’Shannassy handed Ms MacDonald a photo of the Unknown Sailor’s resting place he had taken in the 1950s.

She convinced the navy to search for the grave, and Vice Admiral Noonan took a personal interest.

‘I thought we owed that to all those men who died on the Sydney,’ Ms MacDonald, 73, told The Australian. 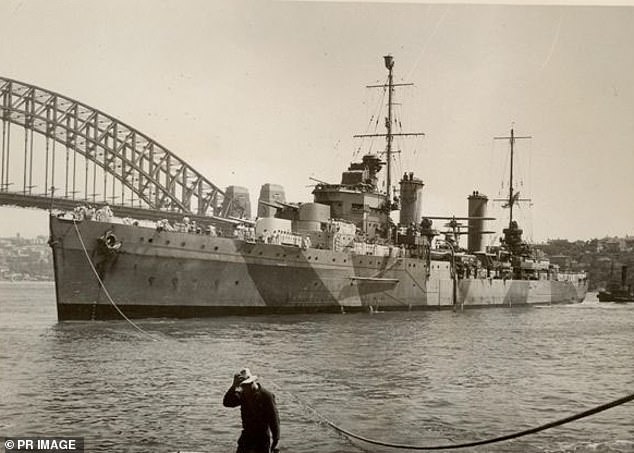 The HMAS Sydney II (pictured in Sydney Harbour) was sunk by the German auxiliary cruiser Kormoran on November 19, 1941

The fact that Mr Clark was tall for the time at 180cm and had a mouthful of gold fillings helped.

The breakthrough came when specialists managed to extract mitochondrial DNA from his teeth.

Two of his direct living relatives were identified, allowing Admiral Noonan to break the news to the family last week that he was the Unknown Sailor.

On Friday in Geraldton, Western Australia, a plaque will be unveiled etched with Mr Clark’s name.

‘It’s such a very tragic story of service and fortitude in the face of adversity,’ Vice Admiral Noonan said.

‘Certainly as far as the navy is concerned, we are just so pleased to be able to identify this sailor and give him back to his family.’