HM Revenue and Customs has urged furloughed employees to report firms which are still asking them to work, with any company found to be abusing the scheme facing criminal action.

HMRC chief executive Jim Harra today told the Treasury Select Committee that he expects the ‘vast majority’ of firms taking financial help from the government to play by the rules.

But he warned any business ‘knowingly trying to defraud’ the coronavirus furlough arrangements that they could be pursued through the courts.

It came as estimates suggested the overall cost of the scheme could triple due to higher than anticipated demand.

The Resolution Foundation think tank believes between eight million and 11 million people could be furloughed which would cost the Treasury £30 billion to £40 billion.

The government initially thought that approximately ten per cent of companies would take up the offer of furloughing workers and that would have cost an estimated £10 billion.

A British Chambers of Commerce survey published today showed 37 per cent of firms are panning to furlough between 75 per cent and 100 per cent of their workers in the next week.

The percentage of firms intending to furlough 100 per cent of their staff increased from 17 per cent in the BCC’s first survey last week to 20 per cent this week. 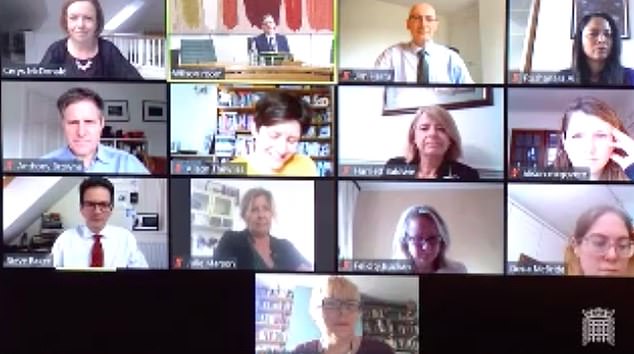 Mr Harra told the commitee, meeting using video conferencing technology, that he believed the ‘vast majority’ of firms will play by the rules on furlough

The Coronavirus Job Retention Scheme allows firms to claim 80 per cent of a furloughed worker’s wages from the government, up to a maximum of £2,500 per month.

The scheme is designed to maintain the link between companies and their staff so that they can get back up and running quickly after the coronavirus crisis ends.

Workers placed on furlough are not allowed to perform any of their duties for their employer but there are concerns some firms could try to abuse the scheme, asking employees to work for them while they are technically being paid by the state.

HMRC is hoping to have the scheme up and running by April 20 so that businesses can start to submit their claims.

Mr Harra told MPs he wants workers to report any firms which ask staff to break the rules.

He also confirmed that workers can still undertake training while on furlough or work for someone else.

‘Employees must be completely furloughed by their employer, that means that they should not engage in any work for that employer whilst they are on furlough,’ he said.

‘They can undertake training for their employer provided that doesn’t involve any remunerative activity for the employer.

‘They can also do other work for other people, so for example they can help the farming industry or they can volunteer and help the NHS, but they must be completely furloughed in relation to the employer that is claiming for them.

‘We expect the vast majority of employers to do the right thing and in fact in many cases they have no choice because people are genuinely furloughed and cannot work.

‘But obviously we will be asking anyone who has got information about the scheme being abused to let us know and there is an online hotline service where any employee who feels that they are being asked to be complicit in something they don’t want to be complicit in to contact us and let us know.’

Alison Thewliss, an SNP MP, asked Mr Harra what would happen to employers guilty of abusing the system.

He replied: ‘Well, they would not be entitled to the furlough payments so if we know that in advance obviously we wouldn’t pay them.

‘Otherwise afterwards we would seek to recover the money from them and depending on the nature of the behaviour, if it amounted to knowingly trying to defraud us then we could take criminal action against employers.’

Mr Harra said ‘any scheme like this is a target for organised crime’ but he insisted HMRC has put in place adequate checks to make sure it is not abused.

In order to be eligible for the furlough scheme, workers must have been registered on an employer’s payroll by February 28.

The hope is that the offer of furlough will stop companies from making workers redundant during the crisis, helping millions of people to stay afloat financially.

Chancellor Rishi Sunak said when he announced the initiative last month that it will be temporary and initially in place for three months, starting from March 1.

However, it could be extended beyond that if coronavirus disruption continues.