A 14th century hoard containing more than 550 rare gold and silver coins that’s potentially worth £150,000 ($195,000) has been discovered in Buckinghamshire.

The haul includes 12 extremely rare full gold coins from the time of the Black Death and is thought to be one of the biggest hoards from the UK in the last decade.

The men who found it were four amateur detectorists taking part in a local metal detector rally.

The coins are being kept in a museum until they are officially valued and will be sold with the proceeds being split between its finders and the land owner.

A 14th century hoard containing more than 550 rare gold (pictured) and silver coins that’s potentially worth £150,000 has been discovered in Buckinghamshire and includes extremely rare full gold coins (pictured) from the time of the Black Death

Over four days the four men excavated 557 coins which were found in a field in Buckinghamshire.

They were initially delighted to find just 12 ornately decorated silver Edward I and II coins.

But the men, who say they are more used to digging up shotgun shells and thimbles than treasures, found coin after coin as they dug.

On the first day they found 276 silver coins and nine gold nobles.

The silver coins are believed to be from the reign of Edward I and II – 1272 to 1327 – and are a rare mintage mix of Lincoln, Birmingham, Ireland and Scotland.

The haul, nicknamed the Hambleden Hoard, is suspected to have been stashed for safekeeping by a wealthy person more than 600 years ago.

The location of each coin has since been painstakingly plotted on a grid.

Three of the four men who found the collection are from Tyneside in north-east England, even slept in tents to avoid the finds getting stolen.

The group consisted of three friends – Andrew Winter, brothers Tobiasz and Mateusz Nowak, and another man who they did not know at the time, Dariusz Fijalkowski.

Mr Mateusz, a hospital cleaner from Newcastle, said: ‘It felt unreal. After finding the hoard, and then clearing the area, we had to extend the search twice more because we were finding so much.

‘It was a miracle moment after moment for everyone.’ 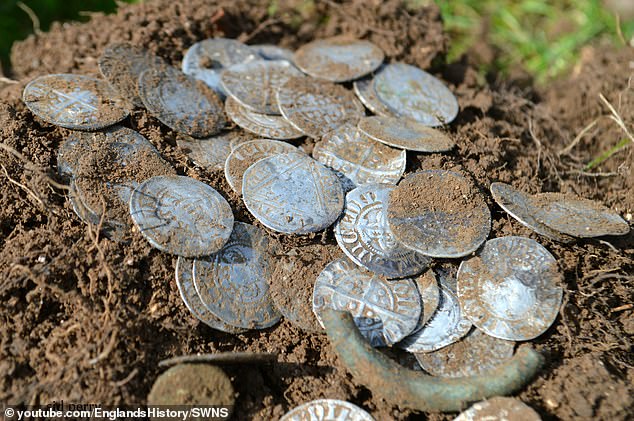 Over four days the four men excavated 557 coins which were initially found in a field where a local rally for amateur metal detectorists was being held. Most of these were silver coins, some of which are shown in the picture above 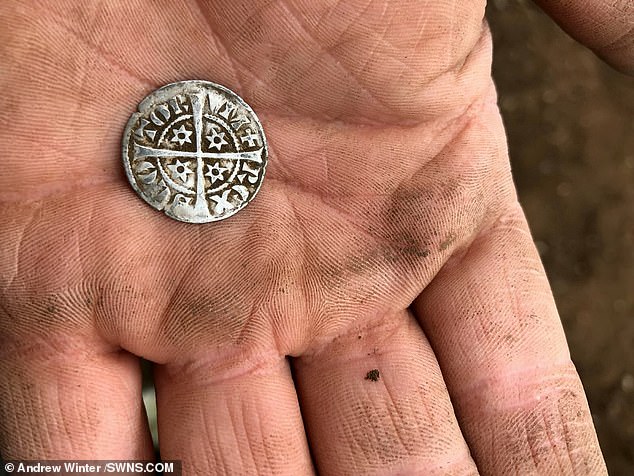 The men who found it were four amateur detectorists taking part in a local metal detector rally in Buckinghamshire. This image shows one of the many silver coins that was found by the team

Mr Tobiasz Nowak, a baker from Newcastle added: ‘I can’t even imagine how we got so lucky. It was the best weekend of my life. I’ll remember it my whole life.’

The find was made at an organised rally which was held on a field near Hambleden, a village recorded in the Domesday Book of 1086.

But while most people participants found themselves digging up shotgun shells and bits of old iron, the men struck gold.

Digging on a field without finding anything, the group were on their way to another location when their detectors signalled.

According to Mr Winter, his machine was emitting a code which suggested they had detected a hammered silver coin. 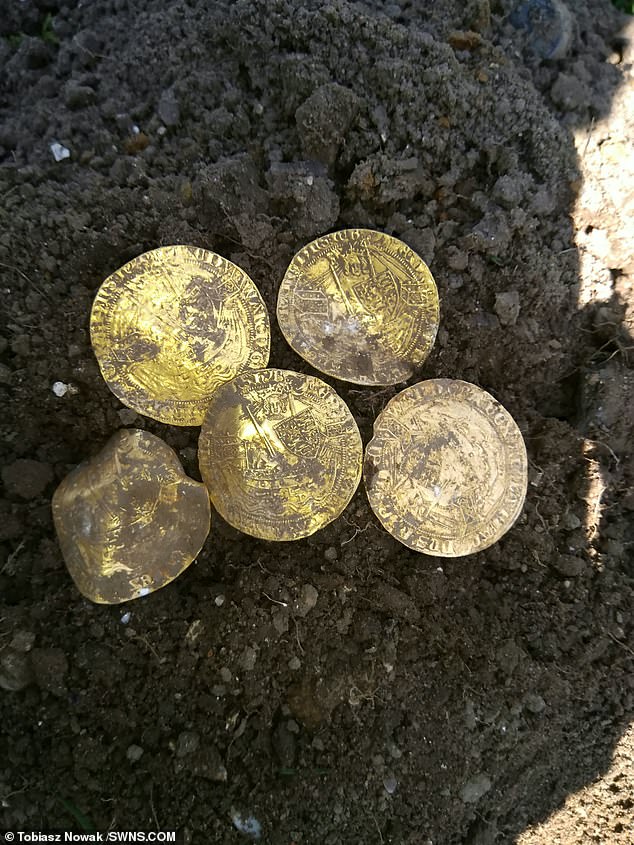 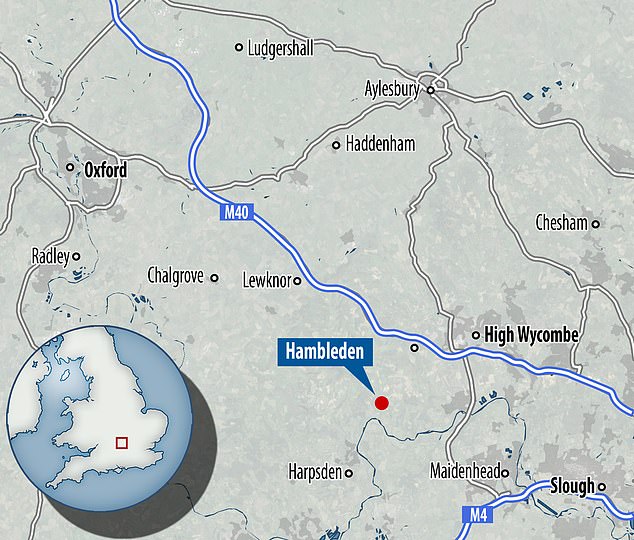 The find was made at an organised rally which was held on a field near Hambleden (labelled), a village recorded in the Domesday Book of 1086 in Buckinghamshire

The trio turned over a clod of earth which contained two coins, and could see more in the hole.

This happened around the same time that Mr Dariusz, who did not know Mr Winter, had found two silver coins.

Under the rules of detecting and treasure finding, anything over three coins is considered a ‘hoard’ – meaning it has to be declared to organisers.

The area has to be cleared and was claimed jointly by the four men, who were then left to work alone.

They said they had to fight off competition and admit it got ‘absolutely hectic’ when news of the find got round the festival. 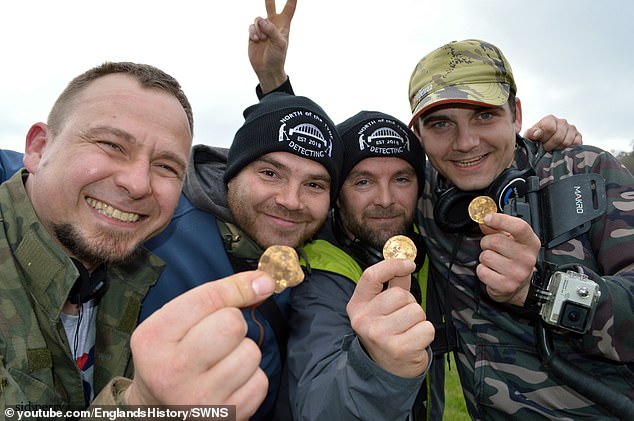 The group (pictured) consisted of three friends – Andrew Winter, brothers Tobiasz and Mateusz Nowak, and another man who they did not know at the time, Dariusz Fijalkowski 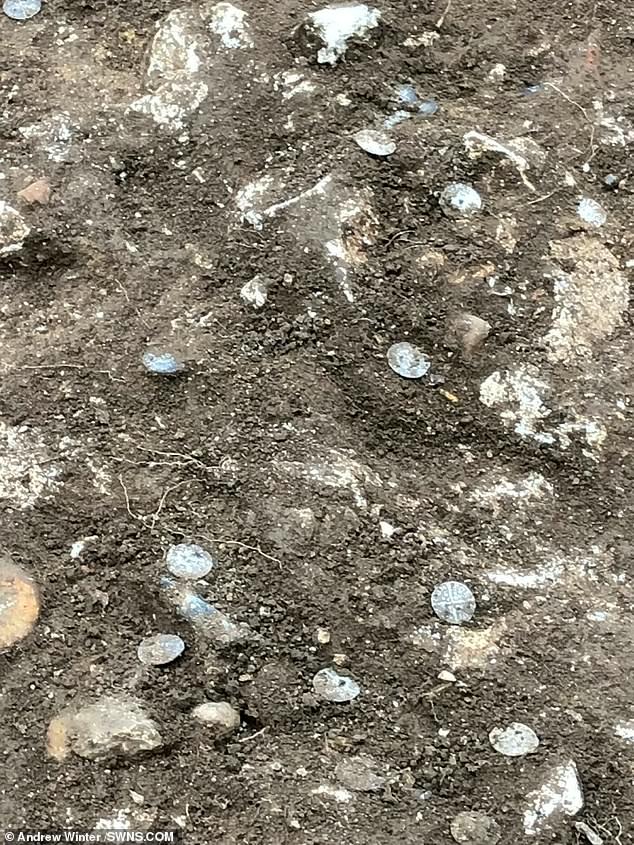 The silver coins are believed to be from the reign of Edward I and II – 1272 to 1327 – and are a rare mintage mix from Lincoln, Birmingham, Ireland and Scotland. The picture shows the silver coins as they were found

Detectorists from all over the world who were at the festival came to take a look, as the four due out coin after coin.

Mr Winter, a forklift and crane driver from Blyth, said: ‘I swung around my machine and all the silver coins were coming in at number 16 on the screen – this indicates a hammered silver coin.

‘The other signal I got was a 21. It went ting, ting, ting and sounds completely different to anything else. I shouted ‘gold, gold gold!’ 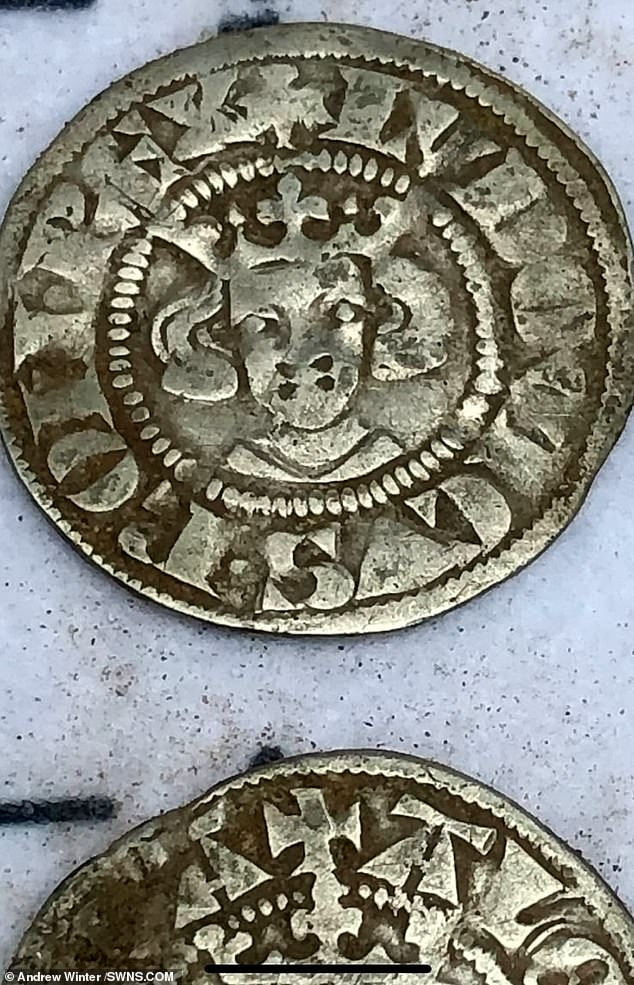 According to Andrew Winter, one of the men who made the discovery, his machine was emitting a code which suggested they had detected a hammered silver coin when the rally was nearing an end. The picture shows one of the gold coins found in the hoard

The discovery has been claimed as the biggest gold hoard found since 52 pieces of mid 17th century coins were found in High Ackworth, West Yorkshire, in 2011.

HOW DO METAL DETECTORS WORK?

The invention of the metal detector cannot be truly claimed by one person.

It is a combination and amalgamation of several different pieces of technology.

Alexander Graham Bell did fashion a device that was an electromagnetic, metal locating machine.

This was based on a device invented by physicist Heinrich Wilhelm Dove.

Sometime later, an engineer Gerhard Fischer, filed a patent regarding a design.

A metal detector consists of a stabiliser, control box, shaft, and search coil.

It is the two coils that are actually responsible for the detection of metal.

This works to detect and amplify frequencies. This type of technology is known as Very Low Frequency or VLF technology.

When electricity is provided to this transmitter coil, there is a magnetic field created around the coil.

This is the same science behind electromagnets.

When the machine wafts over metal the electrons in the metal – due to its metallic bonding and sea of electrons surrounding a fixed positively charged mass –  are affected by the magnetic field.

The change in the electrons triggers a tiny electrical field in the metal object which alters the frequency of the metal detector.

This indicates  metal is present.

More advanced metal detectors are also able of differentiating between different types of metal ad the frequency change is different and therefore the pitch of the note is altered.