Hockney’s 300 feet of spring! Artist David creates 220 landscape pictures on his iPad of his farmhouse in France as seasons changed during lockdown

During the dark days of lockdown, much of life may have ground to a gloomy halt.

But the seasons kept turning and David Hockney was as productive as ever – observing nature at his farmhouse in France and turning it into dazzling pictures.

‘They cancelled the Olympic Games but you can’t cancel the spring,’ he said at the Musee de l’Orangerie in Paris, which is displaying the stunning fruits of that period in his latest exhibition.

‘A Year in Normandie’ features a 298ft-long frieze made up of some of the 220 landscape pictures he created last year.

And Hockney’s place among the greats is cemented with this latest work – reminiscent of Claude Monet’s Water Lilies in a neighbouring room.

When lockdown struck last spring, Hockney, 84, was ‘isolated’ at his Normandy home with two assistants and his dog Ruby.

‘They cancelled the Olympic Games but you can’t cancel the spring,’ Hockney (pictured) said at the Musee de l’Orangerie in Paris 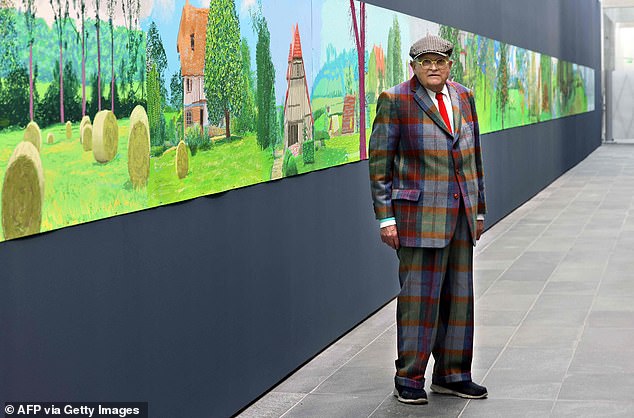 However, whereas some may have struggled with the remoteness, he said he ‘didn’t mind at all’ – and it certainly seems to have paid off.

‘I worked every day because there were no visitors,’ he said. ‘Visitors put me off, get in the way.’ The landscape pictures may seem familiar territory for the Bradford-born artist, who made his name with sun-soaked scenes from California in the 1960s.

But there is one key difference – all the drawings were made on an iPad and printed on to paper.

‘Nature is the source of everything. When I went to Yorkshire 16 years ago, people said, ‘you can’t paint landscape today’. I said, ‘that’s just because of the paintings – the landscape itself can’t be boring’,’ he said. ‘The depictions of it have become boring, that’s all. You’ve got to make them a bit different – and that’s what I’ve tried to do.’

Hockney’s new method has resulted in something else more eye-catching too. Thanks to his iPad, he can wear jazzier clothes to draw as he is no longer worried about splattering them with paint. And Paris was no exception, as he wore a striking checked suit to view the exhibition.

The exhibition ‘A Year in Normandie’ opens on Wednesday.