Hoda Kotb, 54, shows off her body in a brightly-colored bikini during beach trip

Hoda Kotb showed off her trim figure in a bikini while she and her daughter Haley Joy frolicked on the beach wearing matching swimwear.

The 54-year-old Today anchor took to Instagram on Sunday to share a sweet video of herself helping two-year-old Haley carry a yellow bucket from the surf to the sand in bathing suits from Lilly Pulitzer.

The mother-daughter swimwear was a gift from her mom, Sameha Kotb, and Hoda made sure to thank her in the caption of her post, writing: ‘Happy summer …thx mom for the matchy matchy suits!!’

Mother-daughter swimwear: Hoda Kotb, 54, took to Instagram on Sunday to share a video of herself and her two-year-old daughter Haley Joy wearing matching Lilly Pulitzer swimsuits 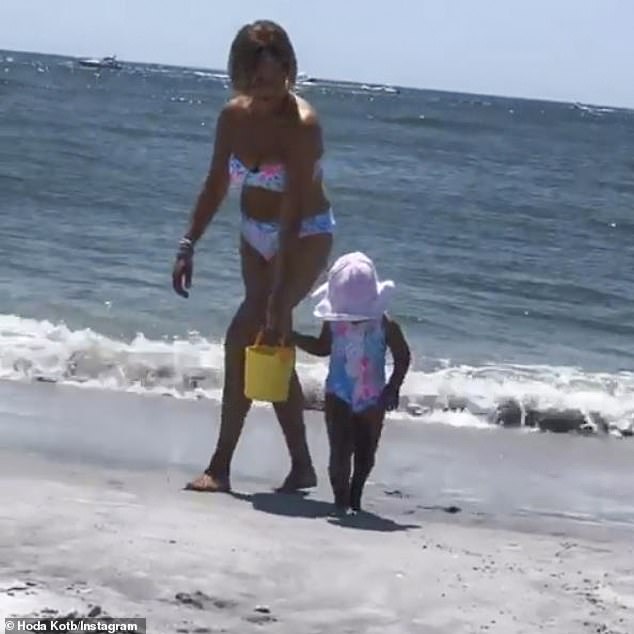 Too cute: The journalist wore a bandeau top and matching bottoms, while little Haley had on a one-piece version of her mom’s swimsuit

In the clip, the journalist is donning a bandeau top and matching bottoms, while little Haley has on a one-piece version of her mom’s swimsuit.

The toddler, who is wearing a floppy white sunhat, looks as happy as can be as she and her mom walk on the sand holding a pail filled with water.

The heartwarming footage has been viewed nearly 500,000 times in just 16 hours, and many of Hoda’s friends and fans flocked to the comments section to tell her how great she looks.

‘That’s so sweet but honestly Hoda you are slaying that bikini,’ one person wrote, while another added: ‘I love it!! Hoda, you look amazing!!’ 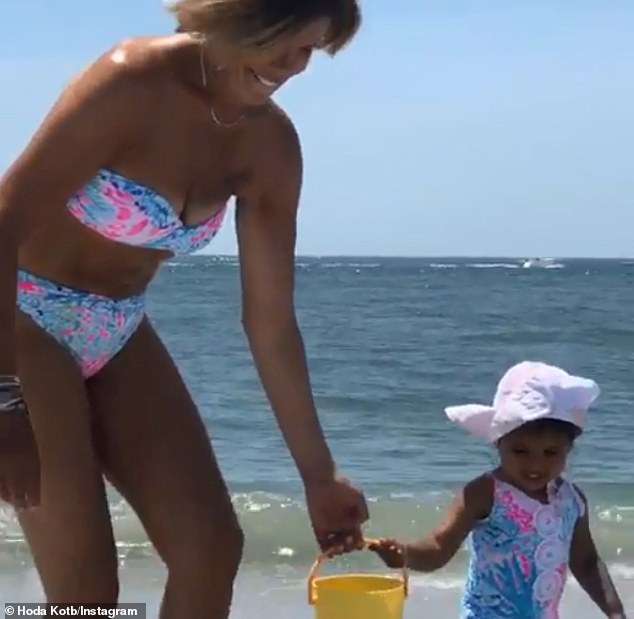 Fun in the sun: In the clip, Hoda is helping Haley carry a yellow bucket from the surf to the sand 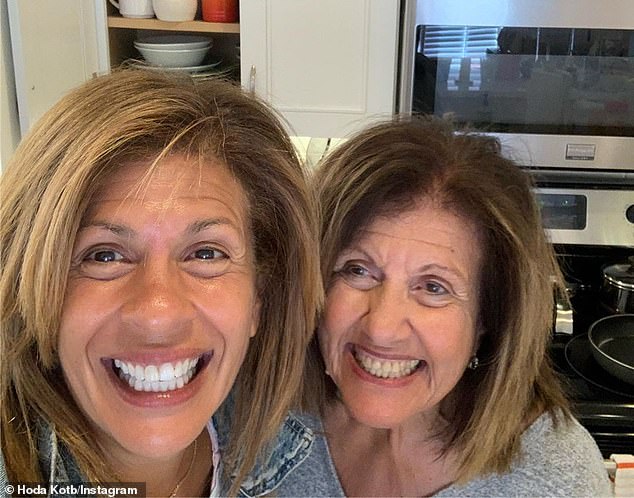 Family: The mother-daughter swimwear was a gift from her mother, Sameha Kotb, whom she enjoyed a visit with over the weekend

The mother-of-two may have been given the swimsuits over the weekend during a recent visit with her mom, Sameha.

On Saturday, she posted a series of photos of herself with her mother, brother, and niece, writing: ‘Hanging with mom and company this weekend.’

Hoda, who was diagnosed with breast cancer when she was 42 years old, came out of treatment unable to conceive and believed for a long time that motherhood just wasn’t in the cards for her. 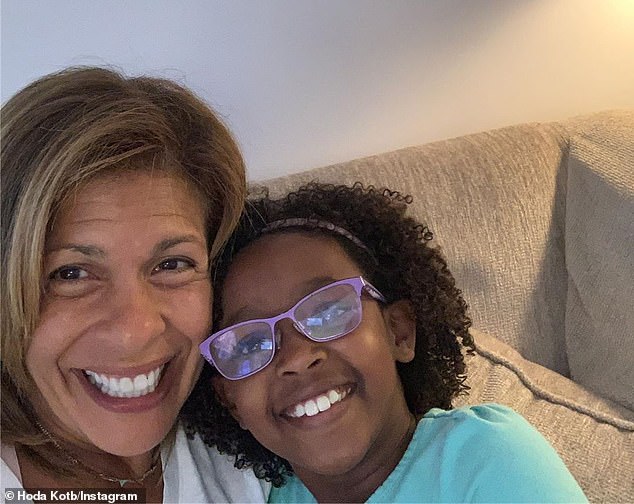 All smiles: Hoda also got to spend some quality time with her niece while with her family 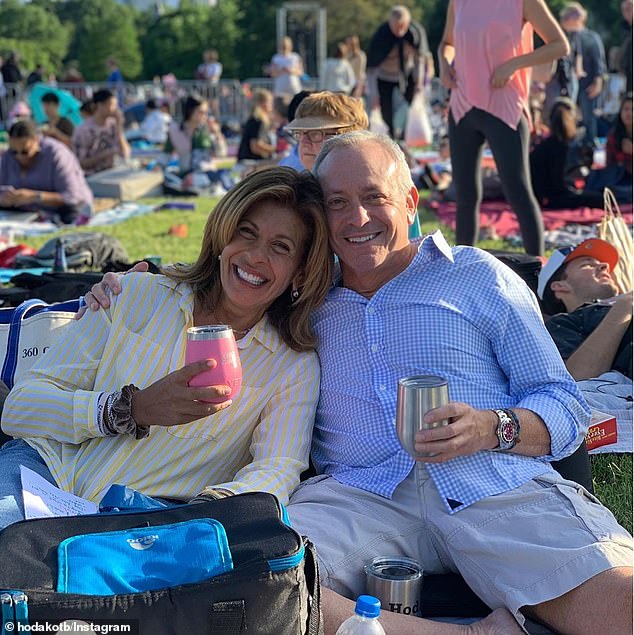 Parents’ night out: Hoda and her longtime boyfriend, Joel Schiffman, celebrated their six-year anniversary watching the Philharmonic in Central Park on June 12

Ten years later, she became a mother for the first time when she adopted Haley in February 2017 with the support of her longtime partner, financier Joel Schiffman.

After opening about her desire to adopt another child, they welcomed their second daughter, Hope Catherine, into their family a few months ago.

Hoda has been on maternity leave since she announced she adopted Hope in April, and she has been enjoying plenty of fun in the sun with her daughters this summer.

Earlier this month, she and Joel celebrated their six-year anniversary with a night out in Central Park to watch a free concert. 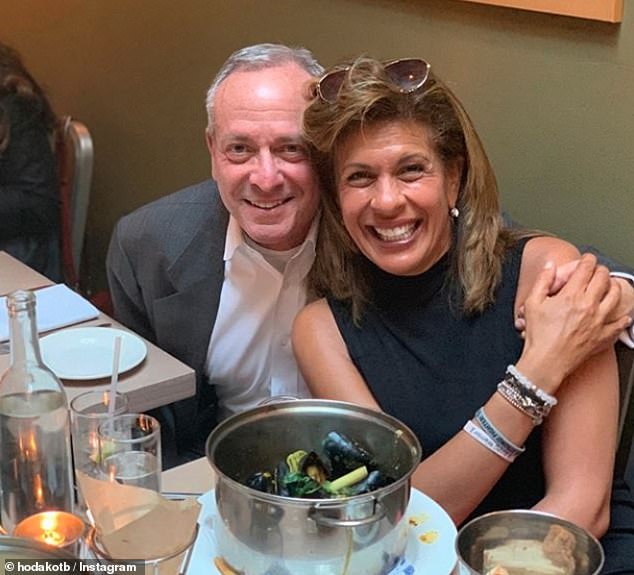 Sill celebrating: The couple’s anniversary was actually June 4, and she took to Instagram the day after to pay tribute to Joel while sharing this sweet snapshot 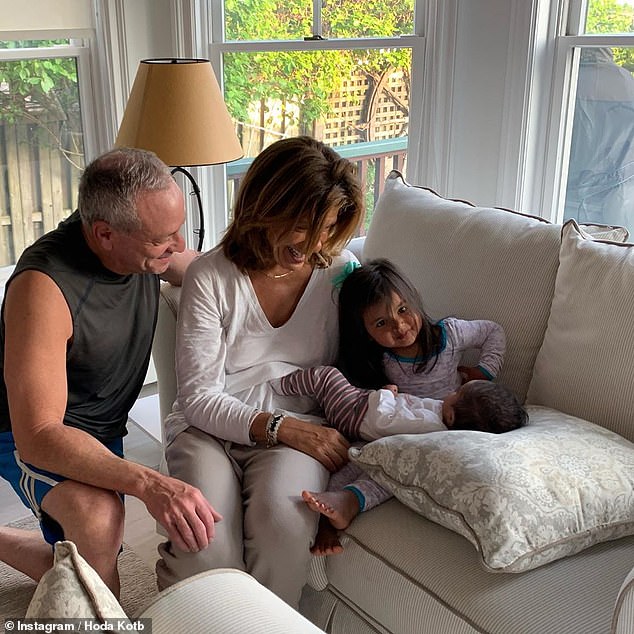 Quality time: Hoda has been on maternity leave since she adopted her second daughter, Hope Catherine, in April. She and Joel took their daughters to the beach last month (pictured)

She shared a sweet photo of herself cuddled up to Joel in their chairs on the grass while holding their insulated wine tumblers.

In the snapshot, Hoda looks relaxed in a sunny yellow and white striped button-down blouse and jeans, while Joel matches her in a checked button-down and shorts.

‘Joel and I celebrated our 6 year anniversary tonight in @centralparknyc,’ she wrote on Instagram. ‘The Philharmonic played for us and 49,999 of our closest friends… a free concert on a gorgeous night.’

Hoda went on to thank their friend Cindy for packing them a ‘surprise picnic basket’ for the special outing. 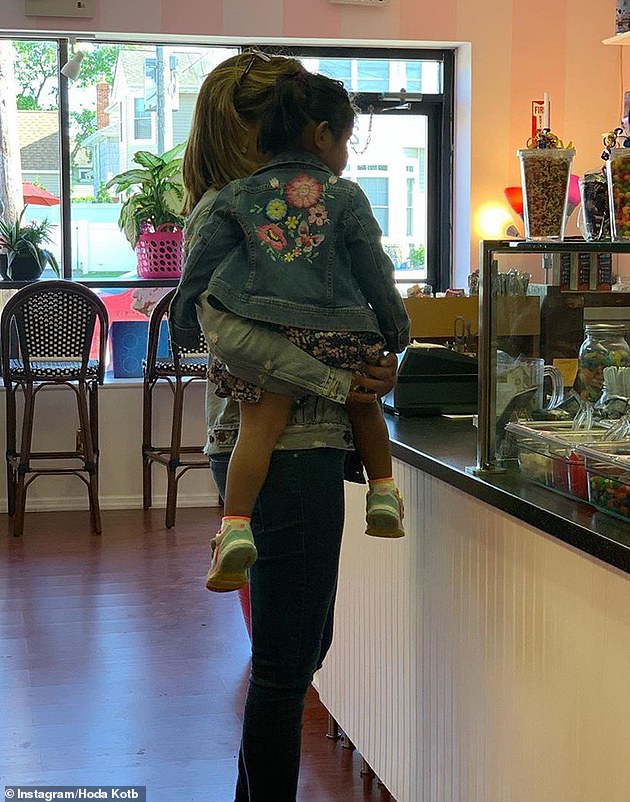 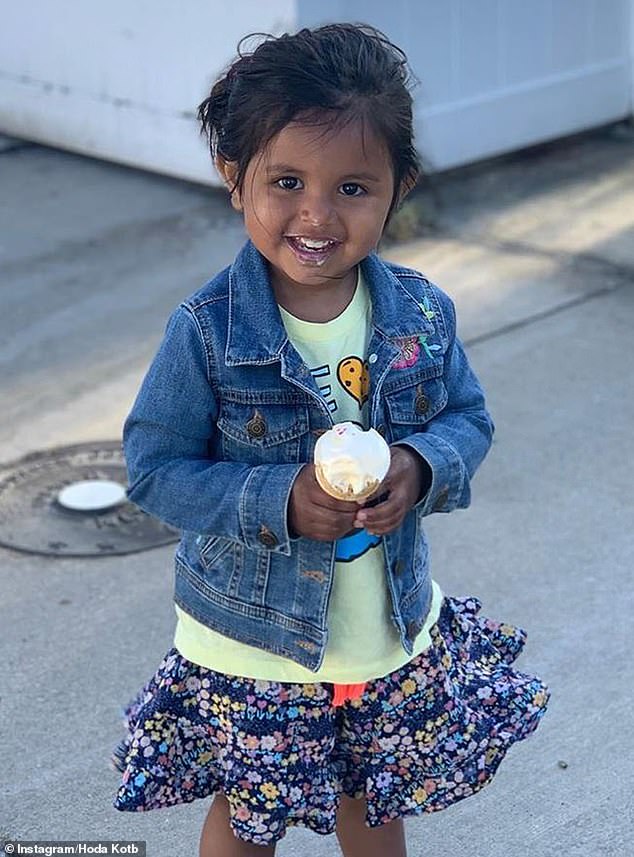 Sweet: One snapshot shows Haley holding an ice cream and smiling brightly at the camera

The couple’s anniversary actually fell on June 4, but Hoda spent the day in visiting the Sesame Place theme park in Langhorne, Pennsylvania, with her Sesame Street-loving daughter Haley Joy.

However, the next day, she paid tribute to her live-in boyfriend and thanked Today show producer Joanne LaMarca for helping them get together.

‘Yesterday marked 6 years with this incredible man. 6 years..2 children..2 new jobs…1 grateful heart ps thank you @jolamathisen and #tyler .. if it weren’t for you two.. we never would have met on that night,’ Hoda wrote on Instagram.

Along with the touching post, the mother-of-two shared a photo of herself cuddled up to Joel at a romantic dinner.