The Today show anchors have finally been able to enjoy a socially-distanced reunion complete with a toast — after working remotely for four months amid the coronavirus pandemic.

Today photographer Nathan Congleton was there to capture photos of the reunion, including images of the hosts seeing each other for the first time, having a socially-distanced toast, and catching up in Adirondack chairs that were spaced six feet apart. 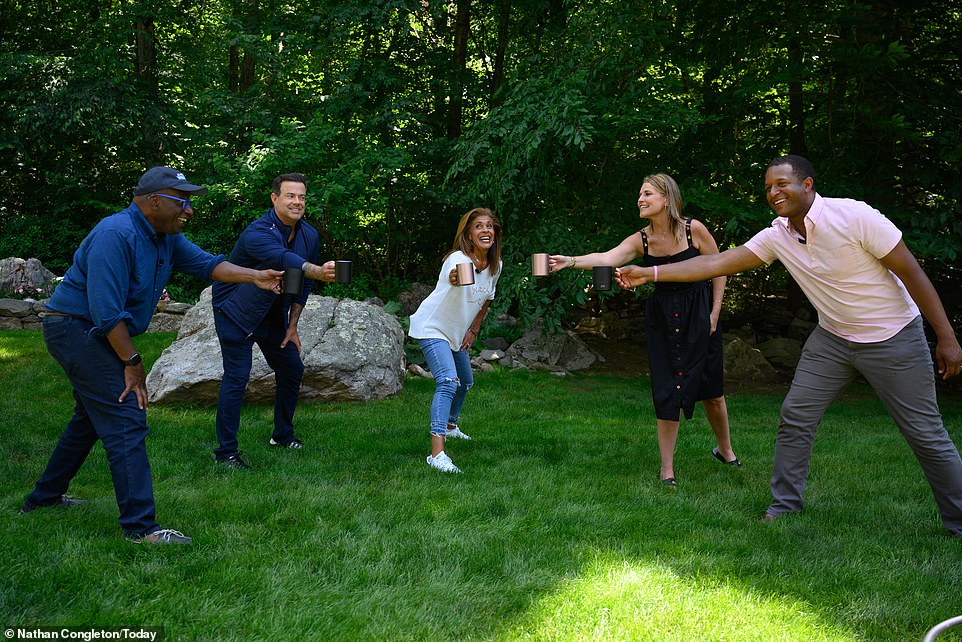 Cheers! The anchors celebrated the launch of NBC’s new streaming network Today All Day with a socially-distanced toast at the reunion 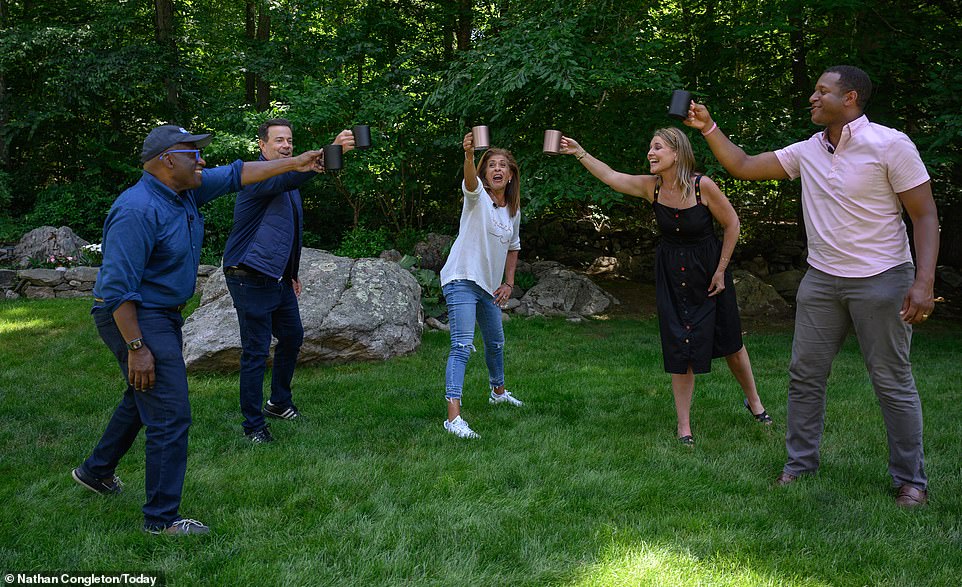 Bittersweet: The meetup marked the first time they’ve been together in person since the pandemic forced them to start working remotely in March

In one picture, the friends can be seen standing in a half-circle while holding their mugs in the air. Another shows Savannah, 48, and Hoda, 55, excitedly chatting while standing safely across from each other.

Savannah, Al, Craig, and Carson have all worked from home throughout most of the pandemic, and up until recently, Hoda has been the only one filming at the Today show studio.

‘I think that’s been the hardest part is that we really love meeting up in the morning and spending our whole mornings together,’ Savannah told Today. ‘It’s really almost the show before the show. It’s the time before the time. All those early hours before 7 o’clock when we get to hang out. I definitely miss that.’

Hoda has given fans a behind-the-scenes look at her solitary new routine in the studio, and she admitted that sitting in her seat on stage by herself is still ‘one of the weirdest things in the world.’ 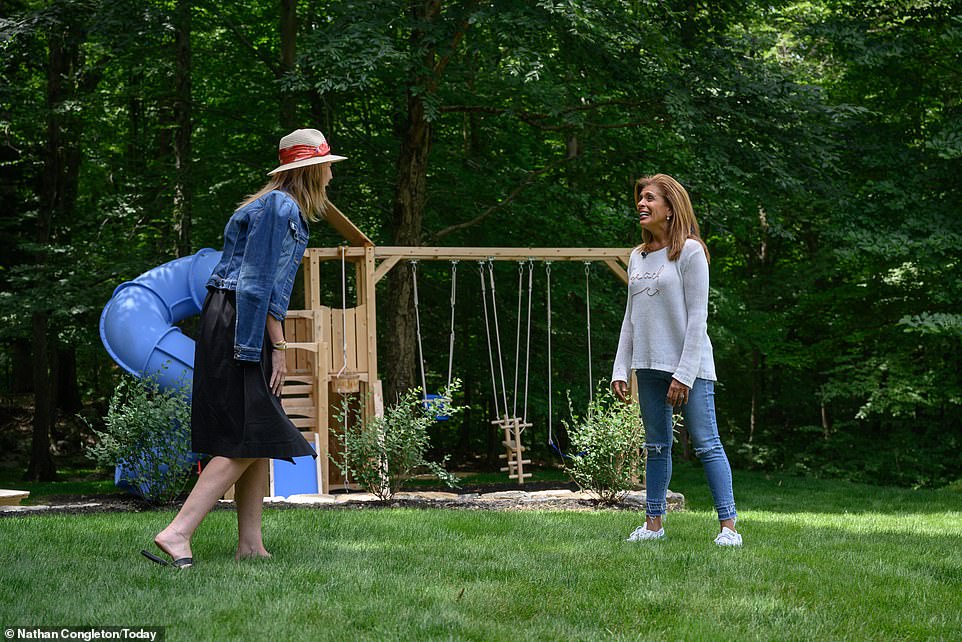 So happy: Co-anchors Savannah, 48, and Hoda, 55, were all smiles when they saw each other 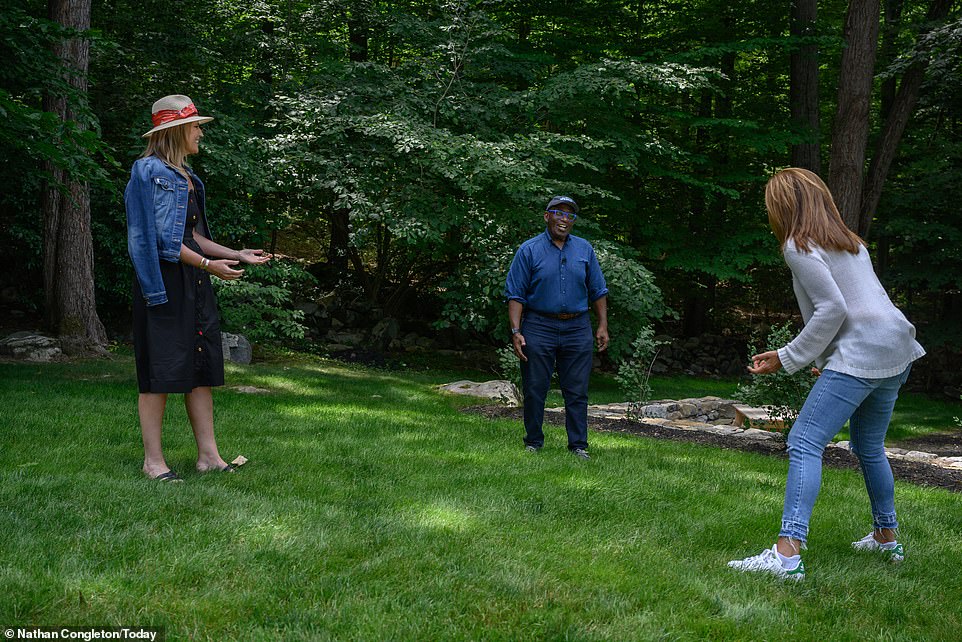 Hard to handle: Savannah, Al, Craig, and Carson have all worked from home for the most part, and until recently, Hoda has been the only one filming at the Today show studio

She was the only Today host in the studio when she broke down in tears live on air after interviewing New Orleans Saints quarterback Drew Brees about his $5 million donation to help Louisiana victims of the coronavirus pandemic.

‘I think we’ve all had a breakdown here or there, sometimes on camera, sometimes not,’ Savannah said. ‘But I think we all know we’re the lucky ones. There’s so much grief on so many levels, and it’s so heavy. And we do want to be together, and it’s hard to carry that alone.’

In May, Craig, 41, traveled to various cities to cover the protests against racial injustice in the wake of George Floyd’s death at the hands of a police officer. Although he wasn’t with his colleagues, they showed him support from afar.

‘Some of the text messages that I’ve gotten from you during all of this have mattered more in the moment that I was in than you’ll probably ever know,’ he told his co-stars at the reunion. ‘So thank you for that.’

Carson, 47, and his wife, Siri, welcomed their fourth child, daughter Goldie, in March at the start of the pandemic, and he admitted there have been ‘real high highs and low lows.’ 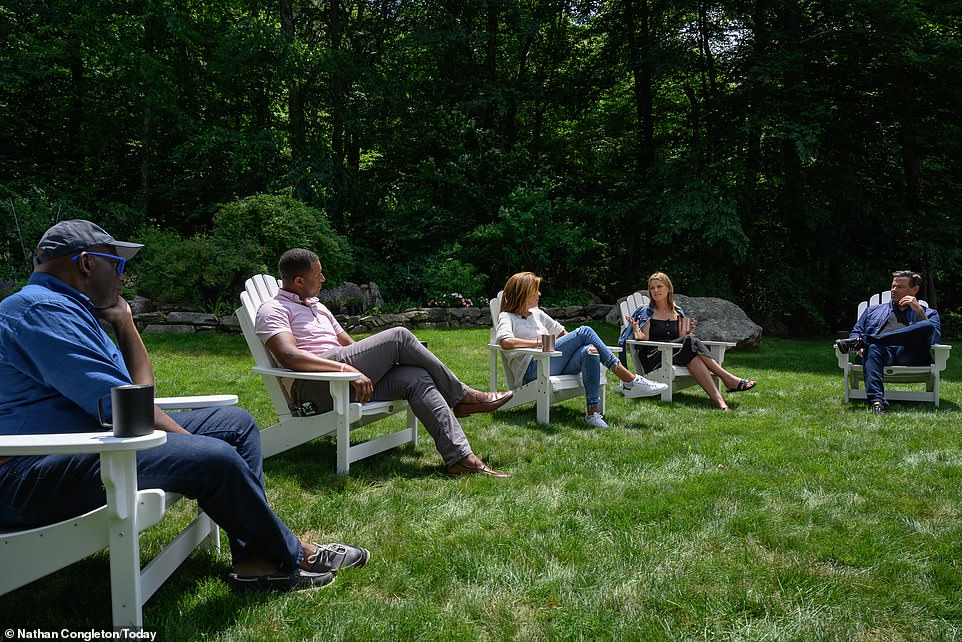 Reunited: They sat in Adirondack chairs that were spaced six feet apart as they caught up 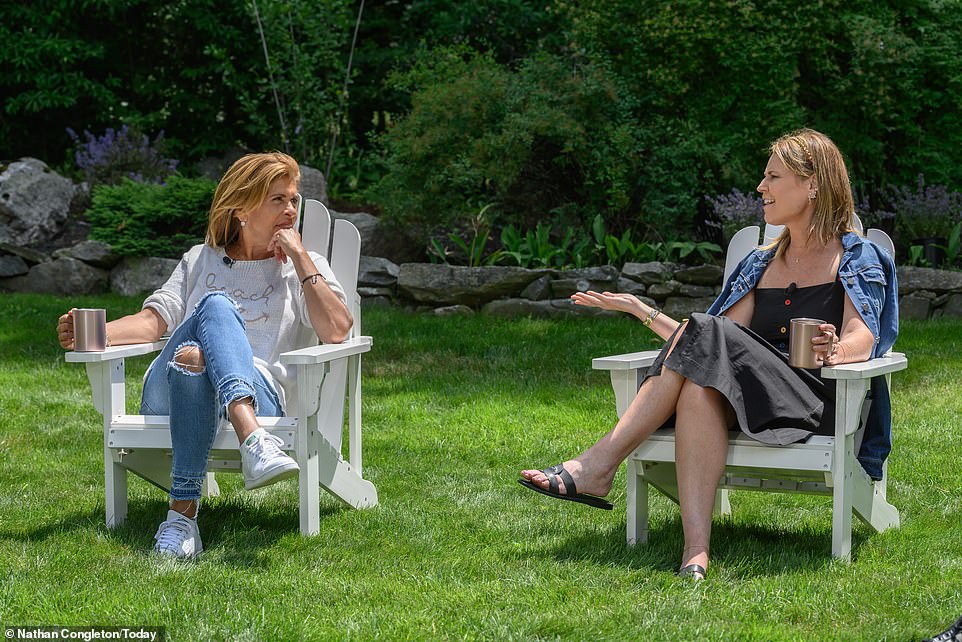 Looking back: Savannah said she misses spending the morning with her co-stars before filming the show together 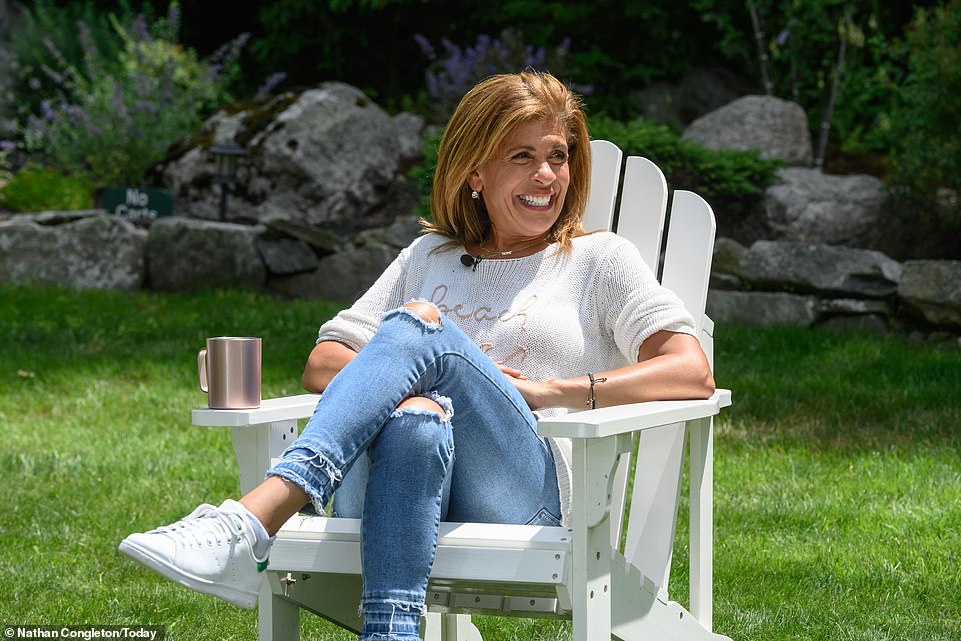 Staying positive: Hoda has been enjoying watching her daughters Haley Joy, three, and Hope Catherine, one, ‘toddle around,’ and being in close quarters with her fiancé, Joel Schiffman

While he is scared every day that his ‘highly-susceptible newborn child’ will wake up with a 103-degree fever, he feels blessed to be able to spend quality time with his family during the crisis.

‘My family’s everything to me,’ he said. ‘I selfishly sort of loved being with them, but it came at such a cost for so many lives lost from COVID-19 and so many people displaced, so many essential workers, as I could sit in my house and get paid, 40 million Americans don’t have a job.

‘People are still getting outside to survive, and that was never lost on me.’

All of the anchors agreed that the best part about working remotely is being able to spend quality time with their children.

Al, 65, has been hanging out and cooking with his 17-year-old son, Nick, who has special needs. 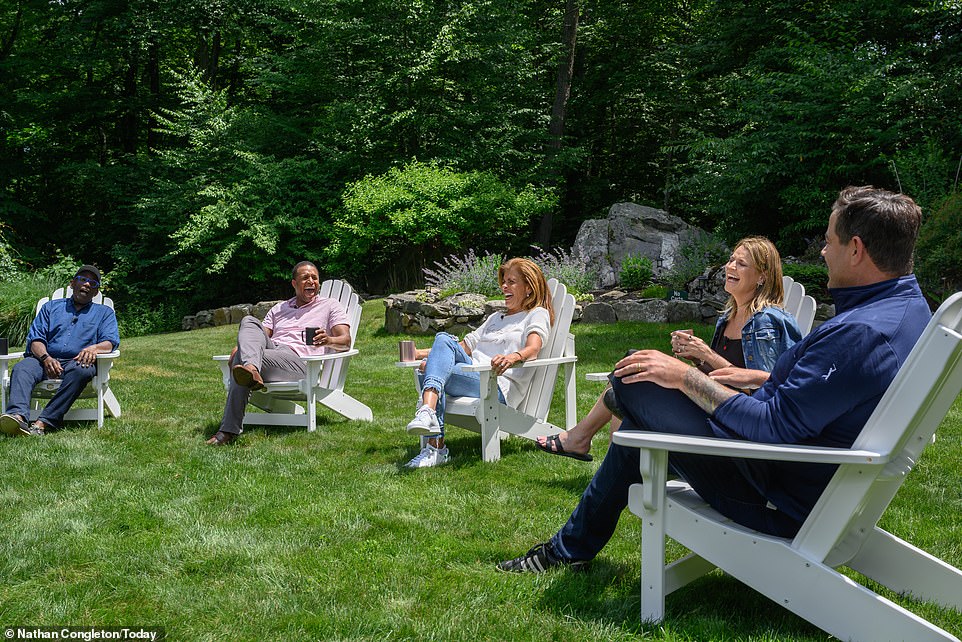 Hands down: All of the anchors agreed that the best part about working remotely is being able to spend quality time with their children 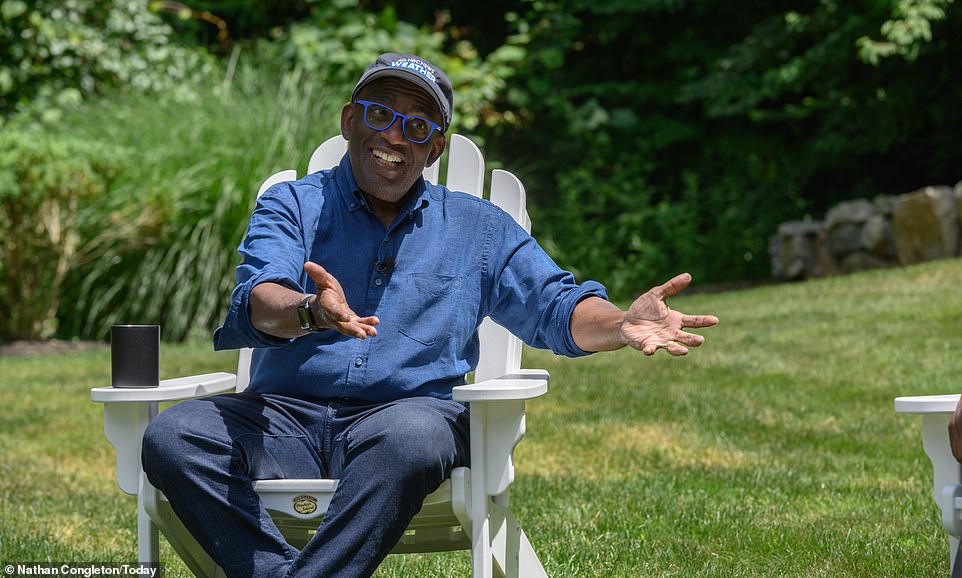 Bonding: Al, 65, has been hanging out and cooking with his 17-year-old son, Nick, who has special needs 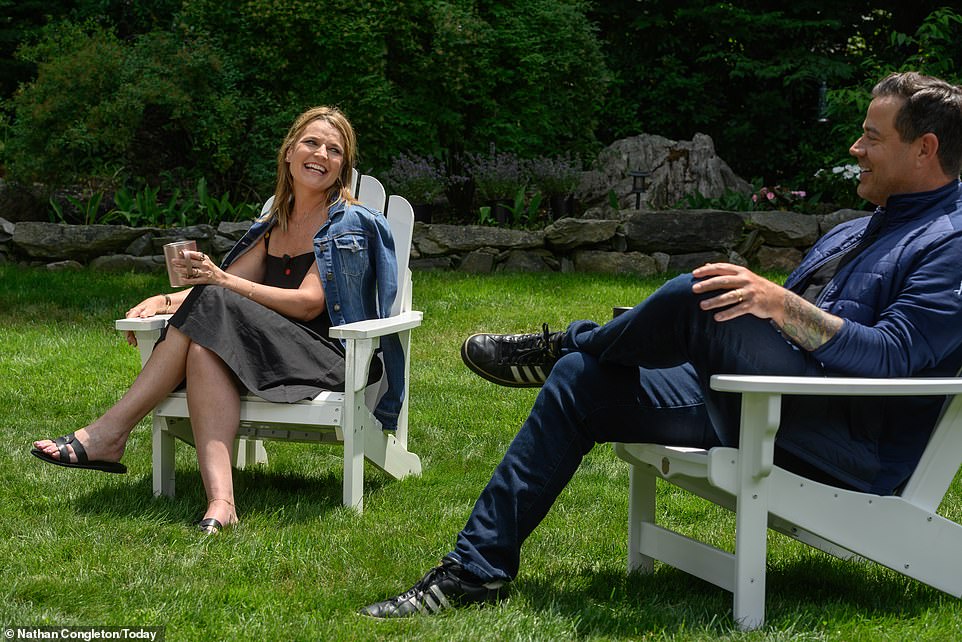 Close as can be: ‘To me, this whole time period is really a testament to bonds that are greater than physical closeness,’ Savannah said

‘His anxiety level was up anyway, and so we were able to hold him close, and he felt safe,’ said the dad, who has two older daughters.

Hoda has been enjoying watching her daughters Haley Joy, three, and Hope Catherine, one, ‘toddle around,’ and being in close quarters with her fiancé, Joel Schiffman, has only confirmed that she picked the right partner.

‘I think it just solidified that … I’m good at choosing friends and now my partner,’ she said. ‘My first partner wasn’t so good. This one I’m good at. I’ve learned.’

Even though they have been apart, Savannah said she feels as close to her co-stars and friends as ever.

‘To me, this whole time period is really a testament to bonds that are greater than physical closeness,’ she said. ‘They’re real closeness, emotional closeness, and our friendships have carried that and have kind of lifted us up.’