Hoda Kotb and her longtime partner Joel Schiffman are raising her adopted daughter Haley Joy together, and the financier couldn’t be happier with their new life.

The 53-year-old Today host took Joel and eight-month-old Haley to visit her mother Sameha Kotb over the weekend, and she revealed on Monday’s show that her partner of four years had her crying tears of joy at the end of the trip.

Hoda explained that even though Joel had to spend the weekend on a pullout couch and Haley didn’t sleep well while they were away, he still declared himself the ‘happiest man in the world’ after the family trip.

Special moment: Hoda Kotb, 53, revealed on the Today show Monday that her partner Joel Schiffman told her he was the ‘happiest man in the world’ over the weekend 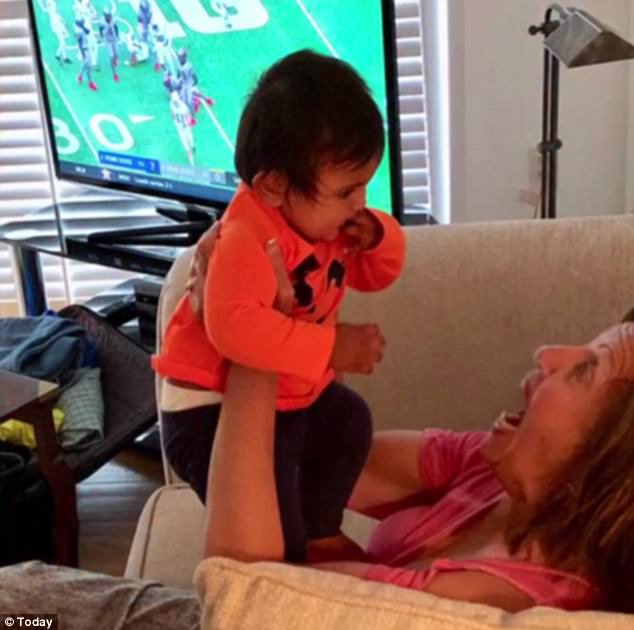 ‘We were on the train ride home, and I am sitting and holding Haley and Joel is over there,’ Hoda told her co-star Kathie Lee Gifford. ‘Joel looks at me and said, “This weekend.” And I said, “Yeah.”

Hoda said she was so touched she ‘literally was weeping on the train’ because most guys would have had a different reaction to their family time.

The mother-of-one added that her mom was doting on Joel and cooking for him, which made it a ‘fun little cozied up weekend.’ 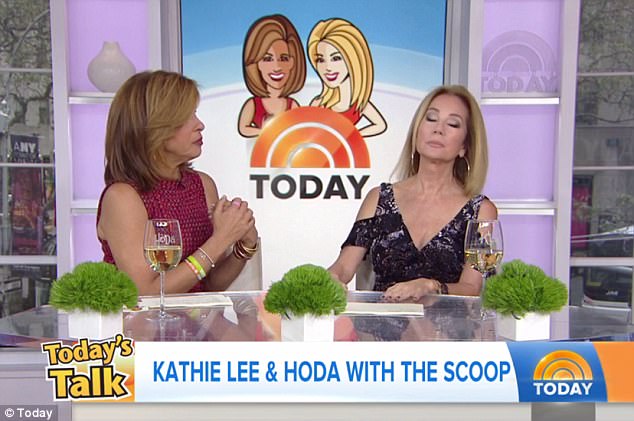 What a guy: Hoda told her co-star Kathie Lee Gifford she ‘literally was weeping on the train’ because most guys would have had a different reaction to having to sleep on a pullout couch 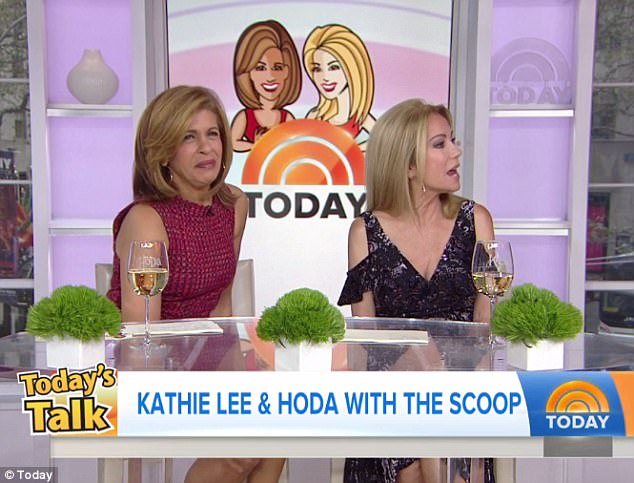 Close friends: ‘Finally something fabulous is happening to you, one of the best human beings I have ever known in my life,’ Kathie Lee said of Hoda’s happiness

Hoda happily shared a photo of her mom with Haley while the family watched the Penn State football game together on Saturday, and she couldn’t help but gush about her daughter recognizing her grandmother as soon as they arrived.

‘It was such a great weekend,’ Hoda said. ‘When my mom opened the car door and Haley was in the car seat, Haley looked up at her and just smiled.’

Hoda proudly noted that Haley was smiling before her grandmother started trying to make her giggle by making faces or saying, ‘Hi baby!’

‘[She] just saw her and boom. The whole weekend was like that,’ she gushed. 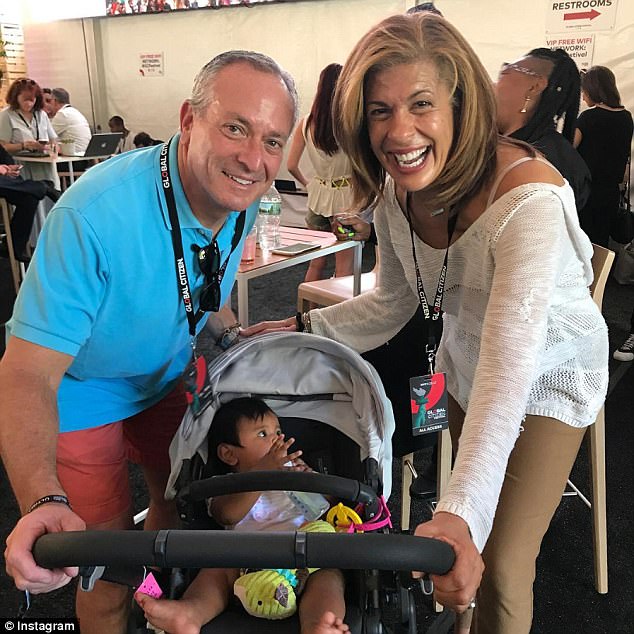 Happy family: Hoda revealed that he had adopted eight-month-old Haley in February, and she has said that her little girl will call Joel ‘dad’ 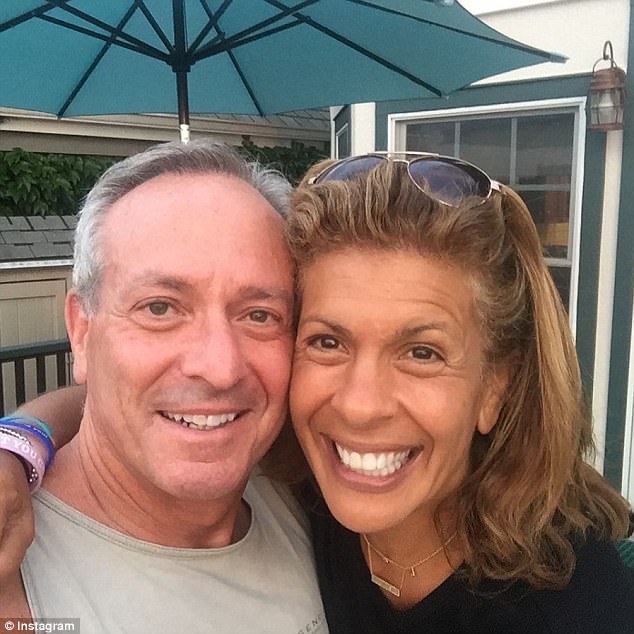 All smiles: Hoda and Joel celebrated their four-year anniversary in June

However, she admitted that they have some tight sleeping arrangements whenever they stay at her mom’s home.

‘My mom has a one bedroom, so me and my mom sleep in the bed with Haley in there, and Joel sleeps on the pullout couch in the other room.’

‘Poor Joel. It’s not good to be Joel,’ Kathie Lee joked, but she soon changed her tune when Hoda revealed the heartwarming words he told her on the train home.

‘OK, so it’s good to be Joel,’ she later admitted.

Kathie Lee noted that that everyone feels such happiness for Hoda because great things don’t always happen to great people. 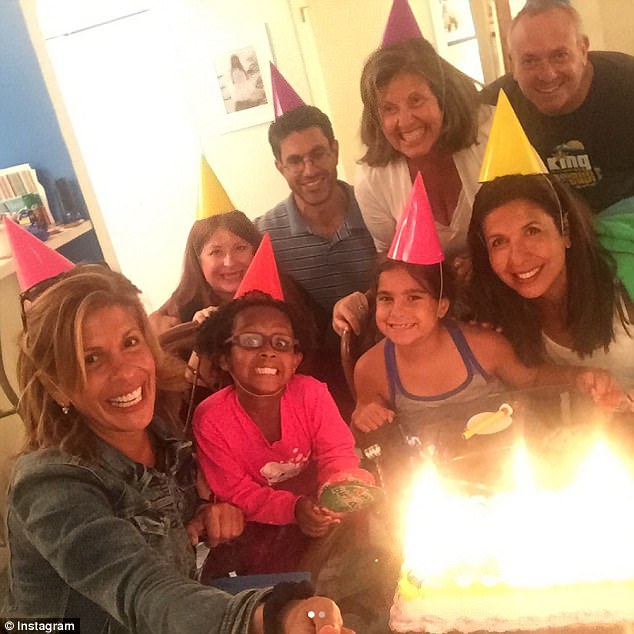 All together: Joel has become a regular fixture at Hoda’s family gatherings. They are pictured together a few weeks ago at her sister Hala’s birthday

‘Finally something fabulous is happening to you, one of the best human beings I have ever known in my life,’ Kathie Lee said. ‘Everybody in this studio feels exactly the same way.’

Hoda battled breast cancer in 2008, and last year she admitted that the one thing missing in her life was having a child.

The journalist revealed she adopted her daughter during an on-air call with her Today colleagues in February.

Hoda has previously explained how supportive Joel was when she brought up the possibility of adopting a baby.

She thought he might want to think about it before committing to taking this major step, but Joel was on board right away. 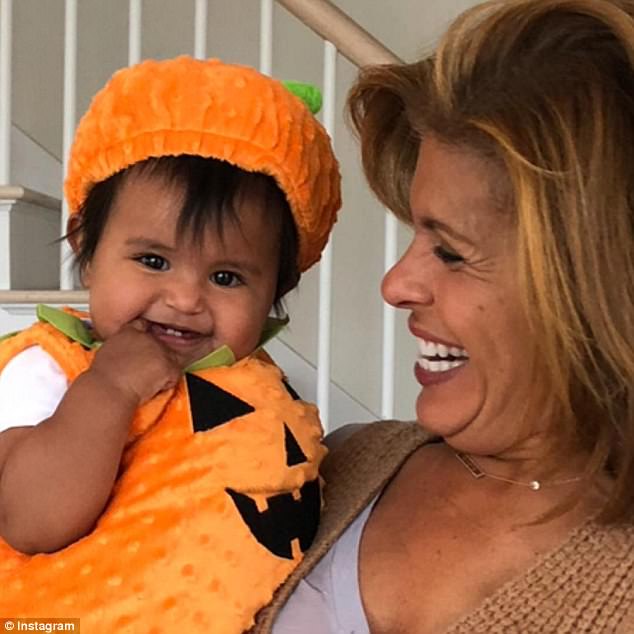 ‘I said, “Think about it for a day or a week or whatever.” And he said, “I don’t need a day. Let’s get this journey going,”‘ Hoda told People in March.

Although Hoda is the only one listed on the baby’s birth certificate, she has said that Haley Joy will call Joel ‘dad.’

The two have happily been raising the little girl together, and Hoda has shared numerous photos of them on family trips and weekend getaways.

And while Haley’s first Halloween is still a few days away, Hoda couldn’t resist sharing an Instagram photo of her little girl in her pumpkin costume last week.

‘I couldn’t wait!’ she captioned the image, which sees Haley smiling for the camera while wearing an orange jack-o’-lantern costume featuring a matching hat.