At 31, the marketing director from Carnes Hill in southwest Sydney was the ‘the healthiest she had ever been’, eating a vegetarian diet, hardly drinking alcohol and doing CrossFit on her lunch break four days a week.

So when her left collarbone ‘disappeared’ under inches of swollen skin in June 2018, Samantha assumed she’d pulled her neck working out and saw a chiropractor to have it realigned.

She didn’t know it then, but the swelling was a large tumour – the first telltale sign that a rare form of cancer known as a ‘silent killer’ was spreading from her lymphatic system into her bloodstream. 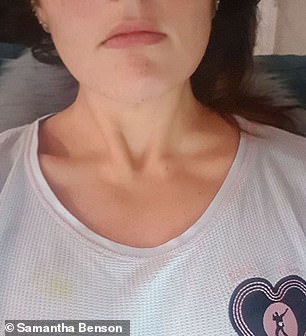 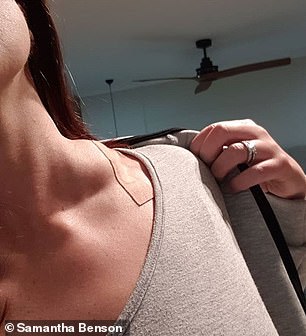 After her chiropractor suspected something more sinister was at play, Samantha saw a GP who referred her for a series of blood tests, scans and ultrasounds on June 15.

Those suspicions were justified 10 days later when she was diagnosed with Hodgkin lymphoma, an uncommon cancer that begins in the white blood cells of a lymph node, usually in the neck.

‘If I had an answer about what could prevent cancer, I’d be avoiding it like the plague,’ Samantha, now 33, told Daily Mail Australia.

If I had an answer about what could prevent cancer, I’d be avoiding it like the plague.

She struggled to describe the emotions that washed over her as doctors gave her the devastating news.

‘I went completely numb. [It felt like] nothing I ever did or would do mattered and I instantly stopped caring about everyone and everything. I wanted to disappear,’ she said.

‘I was a mess until I saw my mum cry, then I knew I needed to keep it together.’ 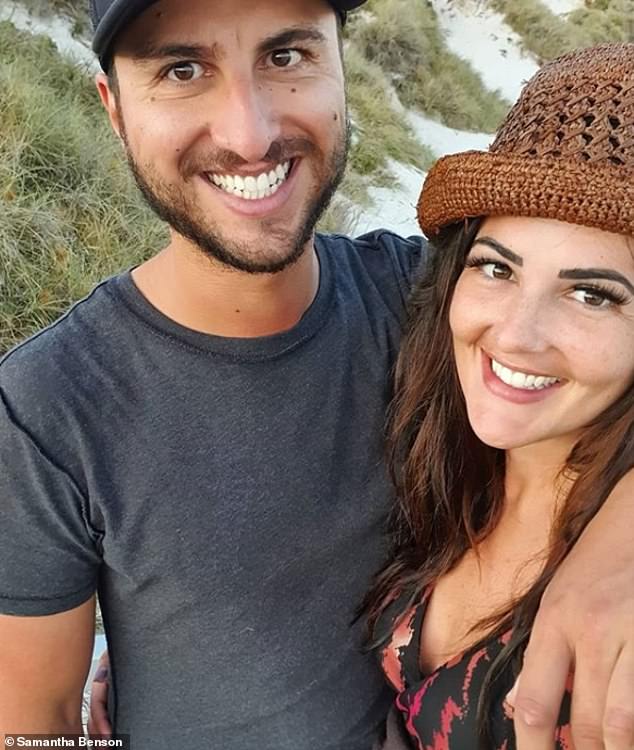 Samantha (right) was following a vegetarian diet, ‘hardly drinking’ alcohol and training CrossFit four days a week when she was diagnosed 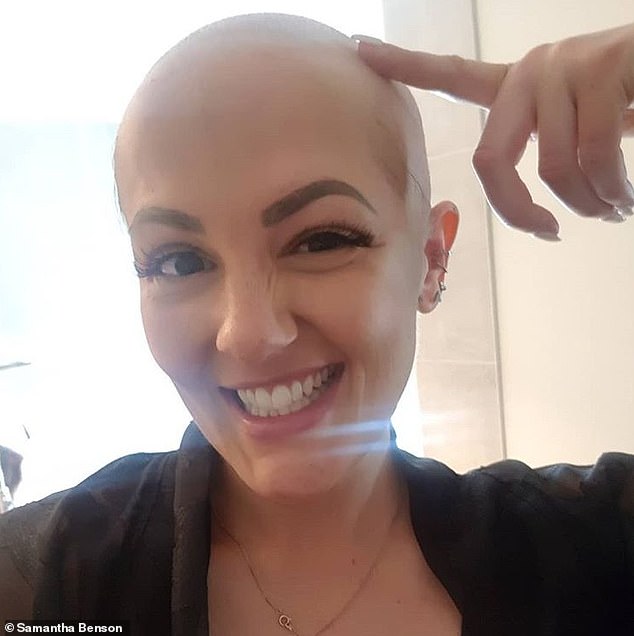 Samantha is one of just 600 Australians diagnosed with Hodgkin lymphoma each year.

Hodgkin lymphoma can be difficult to diagnose because symptoms are easily confused with those of relatively harmless illnesses like viral infections, which often causes people to ignore early warning signs.

There are no screening programmes for Hodgkin’s and it cannot be diagnosed with a blood test, leading health organisations to call it a ‘silent killer’.

Excessive tiredness, fever, night sweats, unexplained weight loss, itchy rashes and painless lumps in the neck, armpits or groin should all be reported to a doctor if they persist longer than 10 days.

It wasn’t until well after her diagnosis that Samantha experienced two further symptoms – intense night sweats and an unexplained nose bleed.

The chance of successful treatment and long-term survival improves dramatically the sooner Hodgkin lymphoma is diagnosed, which means early intervention can make the difference between life and death.

And in good news for patients like Samantha, it is one of the most ‘treatable’ cancers. Unlike others, it is curable even at stage four when tumours have spread to organs outside the lymphatic system. 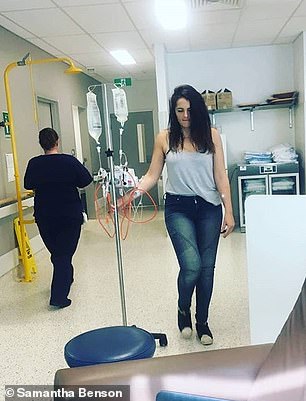 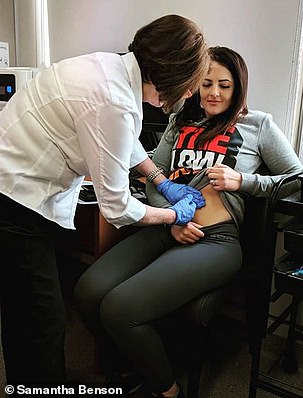 Her darkest days: Samantha undergoes chemo (left) and IVF egg retrieval (right) to give her the chance of becoming a mother after treatment

Hodgkin lymphoma is a rare form of cancer that starts in a type of white blood cells called lymphocytes.

The disease begins in a lymph node, usually in the neck, then spreads through the lymphatic system from one group of lymph nodes to another.

Hodgkin lymphoma is often diagnosed at an early stage and is therefore considered one of the most treatable cancers.

Approximately 600 people in Australia are diagnosed with Hodgkin lymphoma every year, most commonly younger people aged 15 – 29 and older people over the age of 65. It is more common in men than women.

The causes of Hodgkin lymphoma remain largely unclear, but risk factors include family history – with those who have a parent or sibling who has had Hodgkin’s slightly likelier to develop the disease – certain viruses, including glandular fever and HIV, and a generally weakened immune system which can occur because of autoimmune conditions or lengthy periods taking immunosuppressant drugs.

Before starting treatment, Samantha underwent IVF to give her the chance to become a mother in the future.

She was ecstatic 14 eggs were successfully removed, 11 mature enough to be frozen.

In anticipation of losing her hair, Samantha bravely shaved her head surrounded by family and friends at a local beauty salon, raising more than $10,000 for the Australian Cancer Council in the process.

Doctors started rounds of chemotherapy in August 2018, but things took a terrifying turn just two weeks into treatment when Samantha developed sepsis, an infection of the bloodstream that can cause multiple organ failure and sometimes, even death.

She recalls stumbling into the emergency room with a raging temperature of 40.5C, her vision increasingly blurry. Within an hour she was unable to stand. 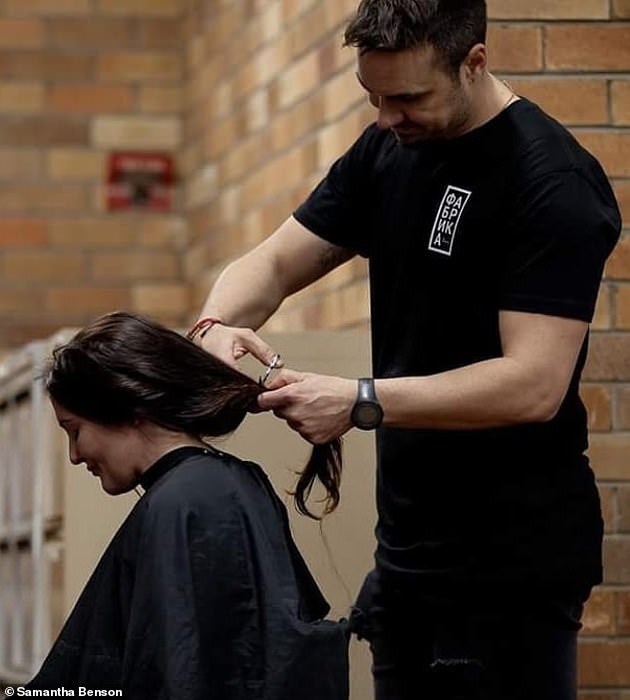 ‘It felt like my body was shutting down,’ she said.

That brush with sepsis meant Samantha was forced to inject a powerful anti-bacterial drug called neulasta into her stomach 24 hours after every round of chemo, stripping her of any energy she had left.

‘You think you’ll have all this time for Netflix and to read some good books, but my brain and body just said no,’ she said.

‘Even watching TV made me tired. I would wake up, reply to some emails and texts and go back to sleep for three days.’ 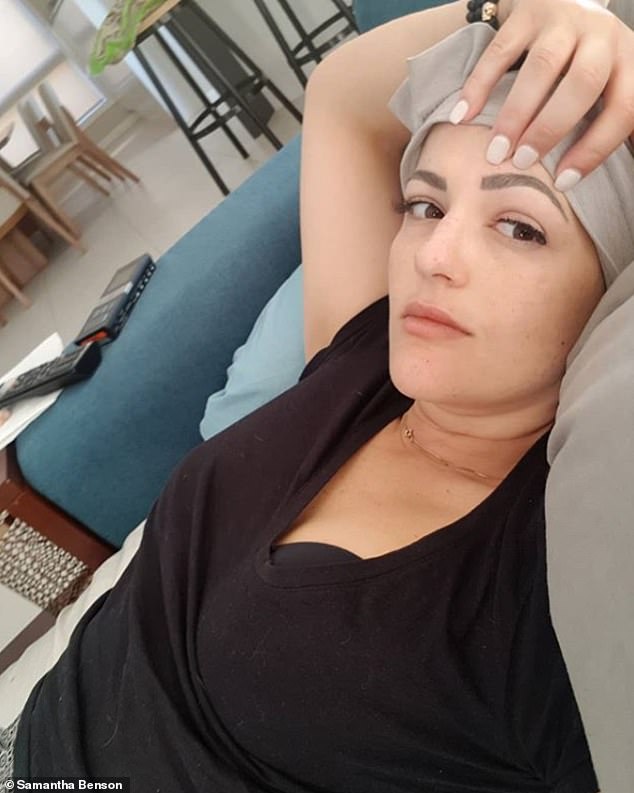 Just two weeks into chemo, Samantha (pictured in November 2018) developed sepsis, a serious infection of the bloodstream that can cause multiple organ failure and even death

She is still in remission and doctors have assured her the chance of relapse is ‘fairly low’.

Throughout treatment, Samantha found unlikely comfort on Instagram, where she documented every step of her story in the hope of helping others facing similar journeys.

She connected with other women battling Hodgkin lymphoma and since completing chemo has received dozens of messages from frightened people newly diagnosed with the insidious disease.

‘I was the youngest person at the cancer clinic at the time. I would pick the chair in the back corner to avoid the sympathy looks from the other patients,’ she said.

‘Cancer can be a very lonely place, no one knows what to say to you anymore outside of ‘remain positive’ and ‘you’re so brave’, so it would be great to see more people connecting with others who understand what they are experiencing.’

Despite the enormity of her ordeal, Samantha feels cancer has given her a new lease of life and refocused her perspective around what really matters. 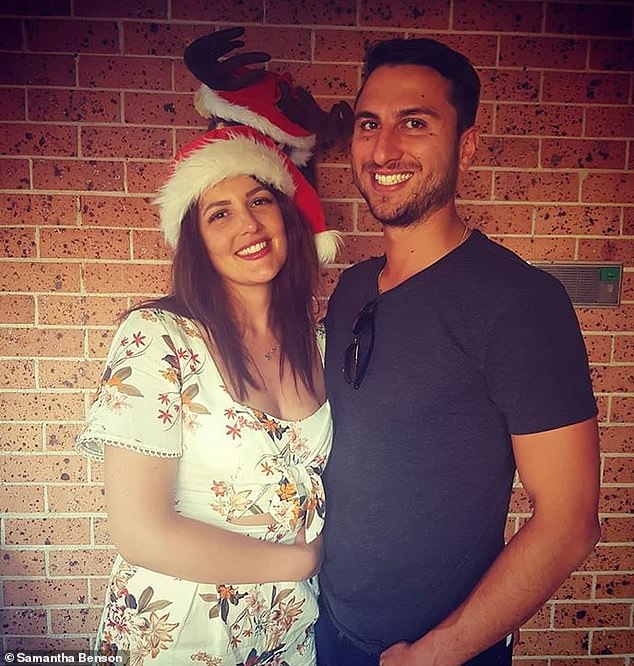 Samantha and Steve on Christmas Day, 2018, two weeks before she completed treatment

‘I hand on heart thought I knew what was important in life, what mattered to me and what my values were but I can honestly say I was clueless,’ she said.

The slate was wiped clean that day, I rebuilt it all from the bottom. I didn’t want to spend the little energy I had on negative things in my life so I left all of that behind and focused on what made me happy.’

Asked for her best advice for patients going through cancer treatment for the first time, Samantha had this to say.

‘It will get harder before it gets better, and some days you won’t want to wake up. But when it does get better, it’ll be better than it ever was before.

‘It’s worth the fight. You’ll lose a lot but gain even more. Your heart will grow more than you ever imagined and there is so much to be grateful for.’

For more information on Hodgkin lymphoma and other types of blood cancer, please visit Lymphoma Australia or the Australian Cancer Council.