Maryland Gov. Larry Hogan revealed in a scathing Washington Post op-ed about President Trump not helping governors secure COVID-19 testing kits that the president had hurled insults at the South Koreans in front of his South Korean-born wife.

Hogan, a Republican, wrote that at a private dinner in early February sponsored by the Republicans Governors Association, Trump said he didn’t like dealing with President Jae-in Moon of South Korea and added that South Koreans were ‘terrible people.’

Trump also talked about how much he ‘respected President Xi Jinping of China; how much he liked playing golf with his buddy “Shinzo,” Prime Minister of Japan; how well he got along with North Korean dictator Kim Jong Un,’ Hogan wrote. 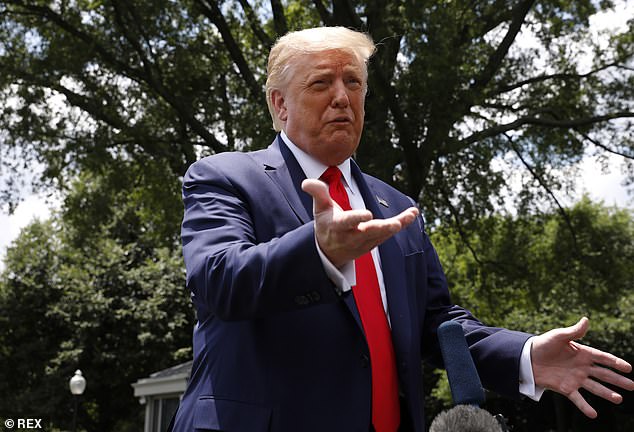 President Trump, Gov. Larry Hogan said, had also boasted about his good relationships with China’s Xi Jinping – despite there already being coronavirus cases in the U.S. – and North Korean dictator Kim Jong Un 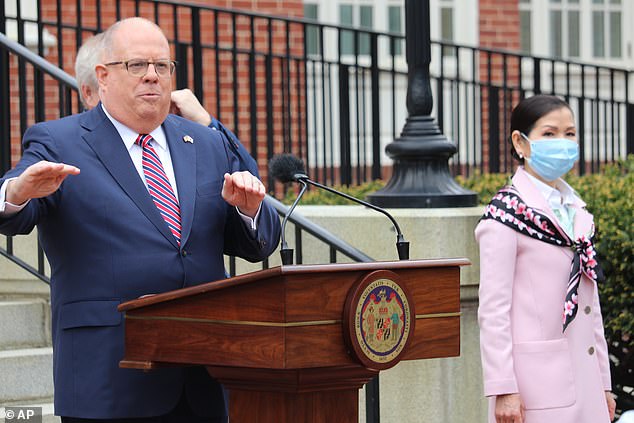 Gov. Larry Hogan (left) in partnership with his wife Yumi Hogan (right) procured 500,000 COVID-19 tests from South Korea after President Trump told the nation’s governors it was up to them to figure out coronavirus testing 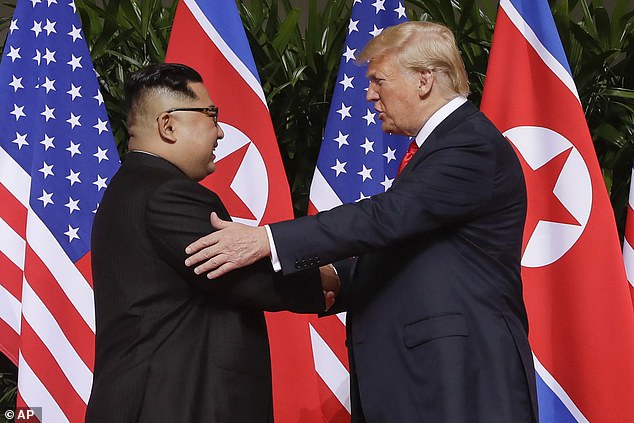 President Trump (right) is pictured with North Korean leader Kim Jong Un (left) during their first meeting in Singapore in June 2018. In February 2020, Trump was boasting about his good relationship with Kim, while complaining that South Koreans ‘don’t pay us’

Hogan revealed this anecdote because it was South Korea – with his wife Yumi’s help – that provided Maryland with 500,000 COVID-19 testing kits when Trump decided to make coronavirus testing a state government problem.

Trump’s beef with South Korea, Hogan said, was ‘they don’t pay us’ – likely a reference to the American troop presence in the Asian nation.

‘Yumi was sitting there as the president hurled insults at her birthplace. I could tell she was hurt and upset,’ Hogan recalled. ‘I know she wanted to walk out. But she sat there politely and silently.’

Hogan’s mention of Trump’s China flattery also cuts into the president’s campaign’s argument that it’s Democrat Joe Biden who’s been taken advantage of by the Chinese.

In early February, the first case of COVID-19 had already been confirmed in the United States, but at that dinner Hogan said he had no recollection of Trump mentioning the virus.

Even before the evening gathering, Hogan said he found the president’s behavior ‘jarring’ because at an briefing with coronavirus taskforce members Dr. Anthony Fauci and Dr. Robert Redfield, who leads the Centers for Disease Control and Prevention, they had given the governors dire warnings.

‘Weren’t these the people the White House was consulting about the virus?’ Hogan pondered. ‘What made the briefing even more chilling was its clear, factual tone. It was a harrowing warning of an imminent national threat, and we took it seriously – at least most of us did.’

Hogan said he jumped into action after the briefing and criticized Trump for being ‘all over the place’ in terms of response. Hogan recalled how testing in the U.S. was riddled with problems, while the president was boasting, ‘We now are doing more testing than anybody by far,’ even South Korea. The president was neglecting to mention that per capita the U.S. was down, Hogan noted.

Hogan also said that when he requested help from the National Institutes of Health to increase Maryland’s testing capacity – NIH is headquarted in Bethesda, Maryland – officials at NIH asked for his help instead.

Francis Collins, the head of NIH, told Hogan he only had the capacity to run 72 COVID-19 tests a day and wondered if Johns Hopkins, which has a facility across the street from NIH, could process some of the tests too.

By early April, the president had announced that testing was up to the states.

By then, Hogan had already put the wheels in motion what was nicknamed ‘Operation Enduring Friendship’ with the South Korean government.

On March 28, Yumi Hogan joined her husband on a call with South Korean ambassador to the U.S. Lee Soo-hyuck to ask the country for help obtaining COVID-19 test kits.

‘Eight Maryland government agencies got involved, as did their counterparts in Korea. It took dozens and dozens of phone calls, night after night – sometimes it seemed like all night – working through language barriers and a 13-hour time difference,’ Hogan said.

On April 18, for the first time ever, a Korean Air flight touched down at the  Baltimore/Washington International Thurgood Marshall Airport, which is located in Maryland.

The plane was carrying 500,000 tests, which Hogan had the Maryland National Guard and the Maryland State Police escort to a hidden location for fear the federal government would try to snap them up.

In the op-ed, Hogan said he expected Trump to applaud the effort.

The president made the comments as he was discussing how Pence’s team had informed governors where testing kits could be processed, not how to procure the kits themselves.

‘The president’s comments that day seemed to confuse test kits with testing labs, but whatever,’ Hogan wrote.

He said he did speak to Pence, who ran the coronavirus taskforce, several days later and joked about the president’s comments.

‘By the way, the president said that instead of working with South Korea, I should have just called you to get tests. If I had known it was that easy, I could have saved a heck of a lot of effort!’ Hogan said he said.

Hogan said Pence ‘chuckled, but there wasn’t much else to say.’