Holden has agreed to pull an SUV advertisement and censor unsafe driving scenes after a judgement found that it broke a car advertising standards code.

The SUV tries to evade motorcyclists who chase it into a shipping yard.

In Holden’s advertisement, its SUV reverses in the dust among containers in a shipping yard with motorcyclists in head-on pursuit

The SUV reverses in the dust among the shipping containers with the motorcyclists in hot pursuit.

The driver then hangs a reverse 180-degree turn, a dangerous manoeuvre which attracted the complaint.

The move, which would be illegal if it were on a public road, should only be carried out by professional stunt-drivers but is often tried by motor hoons.

Formal complaints were made to industry adjudicator Ad Standards which ruled that Holden had breached the voluntary motoring advertising standards code for unsafe driving.

One complainant told Ad Standards the Holden ad was  inappropriate in ‘today’s climate of road safety.’ 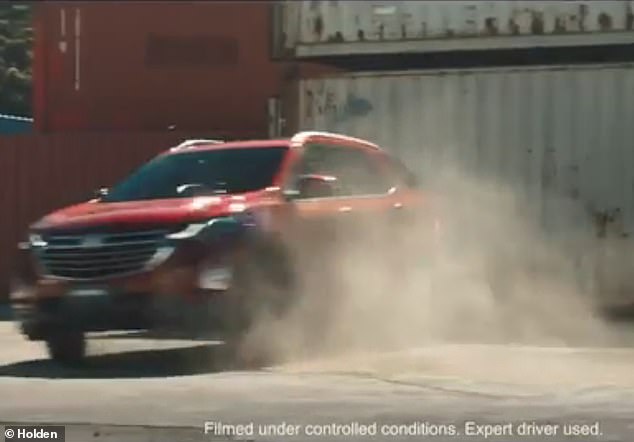 This reverse-180 turn attracted the complaint for unsafe driving. Ad Standards upheld the complaint causing Holden to voluntarily recall and censor the scene

‘In my opinion it would qualify for a loss of licence under the current hoon laws and the vehicle impounded,’ the complainant said.

‘This new Holden ad is clearly in breach of the Code and should be withdrawn immediately,’ said another complainant.

Holden said its advertisement was not meant to be taken realistically, and that it was obviously a comedic Hollywood-style story.

The Ad Standards community panel said the use of fantasy elements and exaggeration did not mitigate the depiction of unsafe driving.

They found that Holden had breached the code and upheld the complaint.

In response, Holden agreed to censor its advertisement to remove the reverse-180.

‘While it was our belief that this manoeuvre was acceptable within the fantastical nature of a comedic story heavy with Hollywood cliché, we will modify the advertisement to alleviate the concerns expressed in the Determination,’ Holden said in its response, published in the Ad Standards judgement.

‘This scene appears in a wide range of Holden’s TV and online advertising and as such we will update the advertisement to create an updated version where the 180-degree turn is removed. We are working urgently through a plan with our broadcast partners to remove the current version of this advertisement from all environments including TV, online and social media.’

Ad Standards found that Holden’s advertisement had not breached two other codes for depicting speeding or a driving practice that would break the law.