Holiday rep, 22, was told she had just DAYS to live after she developed deadly bowel inflammation

A 22-year-old woman was told on November 29 she may be dead by December 1 after doctors struggled to keep her ‘life-threatening bowel inflammation’ under control.

Hayley Kelsey, now 25, thought too much milk or coffee was triggering her diarrhoea and abdominal cramps when they suddenly came on in January 2016.

Ms Kelsey – who was working as a holiday rep in Turkey – ignored her symptoms for months, which ended with her passing blood, losing two-and-a-half stone (35lbs), and being unable to even keep water down.

Once back in the UK, she decided enough was enough and was rushed to Colchester A&E, where doctors diagnosed her with the inflammatory bowel disease (IBD) ulcerative colitis (UC).

Doctors gave Ms Kelsey just 48 hours to live every day that she was in intensive care and even warned her parents she would unlikely make it through the night.

When her body failed to respond to medication, medics had no choice but to operate, leaving Ms Kelsey with a lifelong stoma bag. 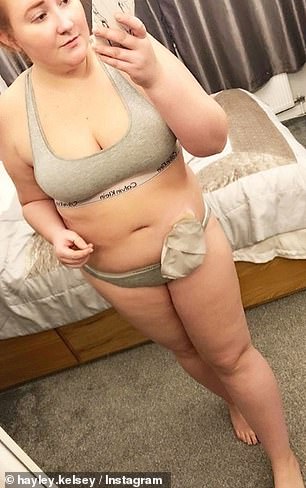 Hayley Kelsey (left) was told she had just days to live after doctors struggled to keep her ‘life-threatening bowel inflammation’ under control. After being diagnosed with ulcerative colitis, medics were forced to remove part of her colon and fit her with a stoma bag (pictured right) 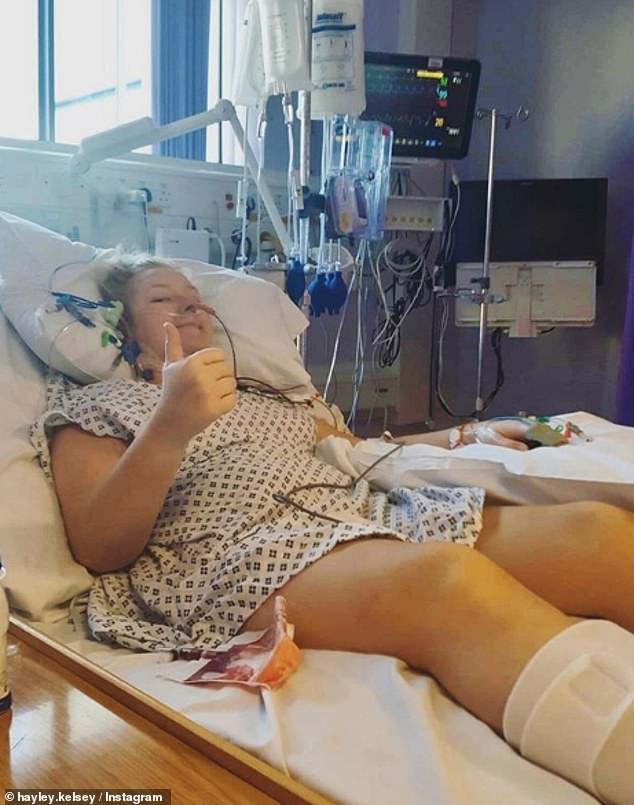 Just ten days after her diagnosis she was wheeled into surgery to remove a section of her inflamed bowel and rectum. Upon waking, her first words were ‘am I dead?’. She then came around and was grateful just to be alive despite her bag. She is pictured after the operation

Ms Kelsey decided to change her diet and live more healthily when her symptoms first developed several years ago, The Mirror reported.

With the pain settling down for a while, Ms Kelsey was devastated when it flared up again that July, worse than ever.

Despite the agony, she put it down to a combination of work stress, homesickness and a relationship breakdown.

With her rep season drawing to a close, Ms Kelsey decided to wait until she was back in the UK to see a GP, who initially dismissed her symptoms as haemorrhoids.

Unable to take the pain any longer, Ms Kelsey’s mother took her to a walk-in centre in early November where a doctor immediately asked ‘why aren’t you in hospital?’

After being rushed to A&E, she was quickly diagnosed with IBD, and given life-saving steroids to try and keep her inflammation down.

WHAT IS INFLAMMATORY BOWEL DISEASE?

Inflammatory bowel disease (IBD) is a medical term that describes a group of conditions in which the intestines become inflamed (red and swollen).

Ulcerative colitis affects the large intestine (colon) whereas Crohn’s disease can occur in any part of the intestines.

People of any age can get IBD, but it’s usually diagnosed between the ages of 15 and 40.

The conditions are chronic and cannot be cured so treatment usually relies on medication and lifestyle changes to manage the symptoms, but may include surgery.

But doctors were not optimistic she would make it, telling her parents: ‘If she makes it through the night, we will focus on that tomorrow.’

Ms Kelsey was finally given the precise diagnosis of UC on November 20.

Doctors reassured her nine in ten patients respond to medication and surgery was rare.

But just ten days later, Ms Kelsey said goodbye to her parents as she was wheeled in for surgery to remove part of her inflamed colon and rectum.

Waking up in intensive care, her first words were ‘am I dead?’.

Once she came around, Ms Kelsey felt instant joy at making it through the operation and was not even phased by the stoma bag, which she named Sally.

After spending several days in intensive care, she was moved to a recovery ward and eventually allowed home.

Ms Kelsey then slowly rebuilt her strength and adapted to life with the bag.

Writing on a past fundraising page, Ms Kelsey claimed she spent 15 months with a ‘constant flare in her rectal stump’, leading to ‘cramps, toilet urgency and blood loss’.

She also lost her hair after spending five months on steroids.

Although her love life took a battering at first – with one man breaking up with her because she was ‘too sick’ and her bag is ‘disgusting’ – Ms Kelsey is now in a loving relationship with someone who accepts her for who she is.

Refusing to let her bag hold her back, Ms Kelsey goes swimming, wears bikinis and is even doing a sponsored skydive to raise money for Crohn’s and Colitis UK. Donate here.

For more information on Colitis and Crohn’s disease, visit Crohn’s and Colitis UK. 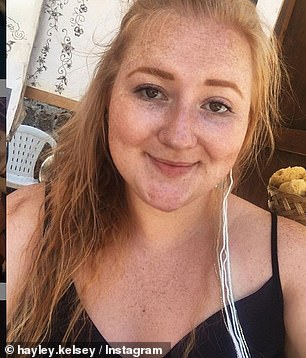 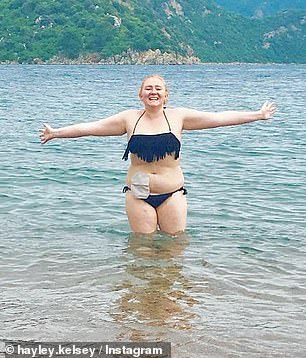 Ms Kelsey (left) slowly rebuilt her strength and adapted to life with the bag but still battled ‘cramps, toilet urgency and blood loss’. Several years on, she is refusing to let her condition hold her back, and swims and wears bikinis despite her stoma bag (pictured right) 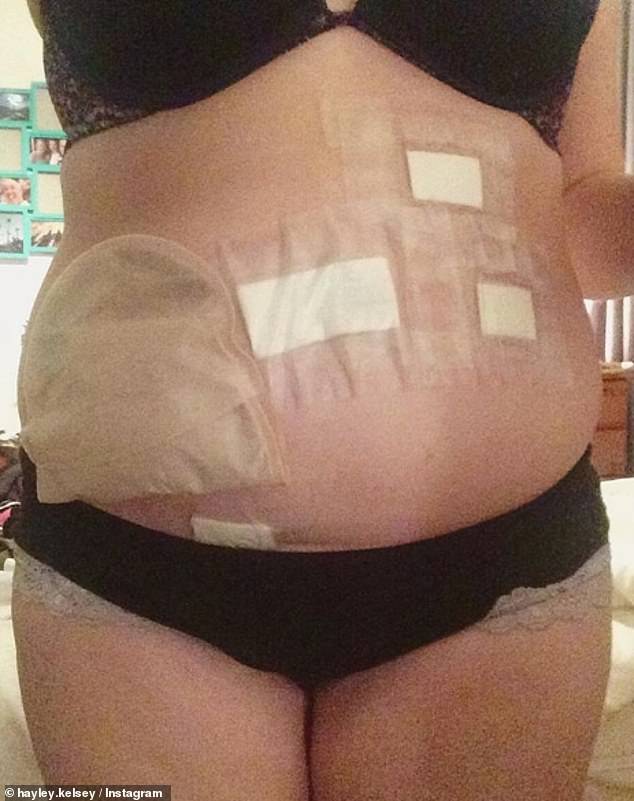