Holidaymaker, 60, is hit by a wave so powerful it ruptured an artery in her NECK

Spending time at the beach is supposed to be relaxing.

But for one unlucky woman, a holiday to the seaside took an unexpected turn – and left her in hospital.

The unnamed 60-year-old, from Ireland, was hit so hard by a wave that it ruptured one of the arteries in her neck.

Astounded doctors published the tale in a medical journal and claimed it to be the first ever case of its kind. It is unknown where the patient was on holiday.

An unnamed 60-year-old woman suffered a ruptured artery in her neck after a wave hit her while on holiday. Brain scan shows the thickened, and therefore weakened, artery

She eventually went to hospital two weeks later, when her eyelids started to droop and and her pupils became uneven in size.

Initial brain scans revealed one of the arteries that supplies the brain with blood and oxygen had ruptured.

This is thought to have occurred due to the impact of the wave causing the small blood vessels within the artery to break apart.

The patient was diagnosed with the rare condition Horner’s syndrome, according to the tale published in BMJ Case Reports.

This is caused by damage to the nerves in the face and results in the eyeball sinking into its cavity.

After being referred to Galway University hospital, medics discovered the patient’s eyes were moving involuntarily but she was otherwise healthy. 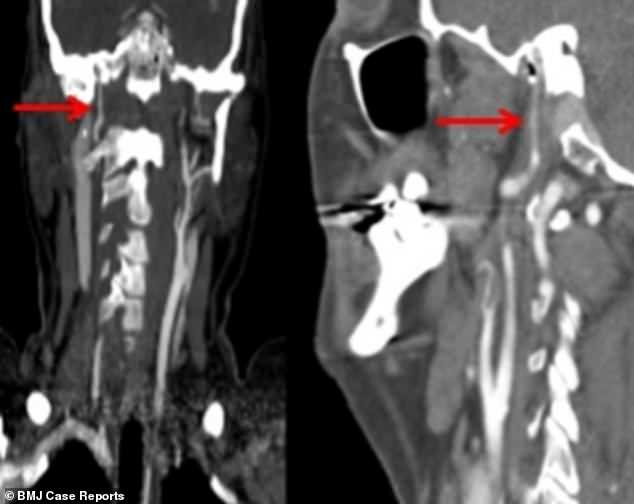 She began experiencing dull headaches and neck pain almost immediately after the crashing wave struck. Brain scans show the length of the artery that ruptured during the incident 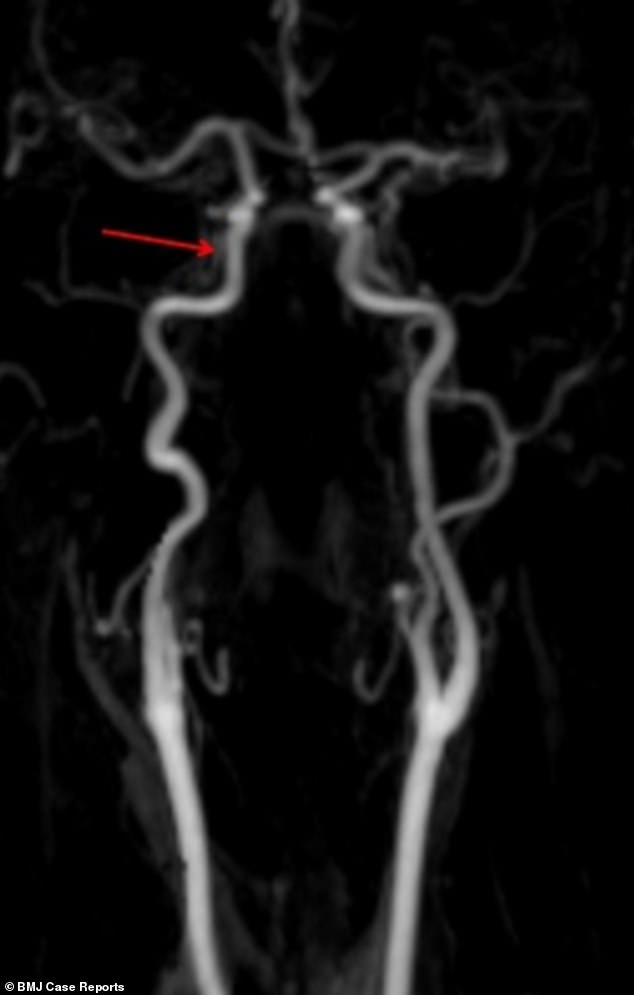 After initially taking aspirin to prevent her having a stroke, the patient came off the medication and was fully recovered six months later. Brain scan shows the healed artery back to normal

WHAT IS HORNER’S SYNDROME?

Horner’s syndrome is defined as a decreased pupil size, a drooping eyelid and reduced sweating on one side of the face.

It occurs as a result of damage to nerve pathways from the brain to the face and the eye to one side of the body.

This may be due to a stroke, tumour or spinal cord injury, however, there is not always a cause.

These symptoms can be subtle and difficult to detect.

Children under one may also have a lighter coloured iris in the affected eye.

Lack of redness in response to heat or exercise can also occur in youngsters.

Prompt treatment is required due to Horner’s often occurring as a result of a serious condition.

There is no specific treatment for Horner’s itself.

Symptoms often resolve when the underlying cause is treated.

After carrying out an MRI scan to be on the safe side, they found she was suffering from carotid artery dissection (CAD).

This prevents oxygen reaching the brain and is responsible for up to 25 per cent of strokes in young adults. Physical trauma causes 40 per cent of all CAD cases.

However, Dr Etimbuk Umana, who wrote the case report, said she had never before heard of a beach wave causing the condition.

Horner’s syndrome is thought to occur in between 25 and 60 per cent of patients with CAD.

The woman’s damage had fully repaired itself after six months, doctors wrote in the journal.

She was initially given aspirin to reduce her risk of stroke, but it was stopped when a scan showed oxygen-rich blood was still reaching her brain.

Doctors were also concerned the blood-thinning drug may pose a bleeding risk.

A scan revealed the swellings of clotted blood in her artery were resolving on their own and did not require further treatment.

‘I continued to experience a lot of soreness over my forehead for a few weeks, not relieved by painkiller tablets,’ the patient said.

‘Eventually after taking Lyrica for a few months my pain subsided.’

Lyrica is a brand name for the painkiller pregabalin, which is also used to treat epilepsy and anxiety.

According to the doctors, more research is required to determine if anti-clotting drugs benefit patients in cases such as this.