Holidaymakers get just 0.87 euros per £1 at the airport

Holidaymakers buying their euros at the last minute are falling victim to ‘pantomime-villain’ airport bureaux offering just 87 cents to the pound.

But at the airports the exchange rate plummeted further, with people getting the worst rates since the financial crisis.

At Southampton airport yesterday the walk-up rate offered by currency exchange service Moneycorp was just 0.872 euros to £1. This means for every £1,000 of spending money, holidaymakers would get just 872 euros. By contrast holidaymakers who purchase their travel money online in advance can get much closer to the official rate.

Tesco, for example, was yesterday offering 1.07 euros and free delivery for online orders of more than 500 euros.

Ian Strafford-Taylor, chief executive of travel money firm FairFX, said: ‘Holidaymakers getting away from it all to make the most of the last bank holiday of the year need to be wary of buying currency last-minute at the airport.’

And James Daley, director of consumer website Fairer Finance, said: ‘Airport bureaux are becoming the pantomime villains of the summer. 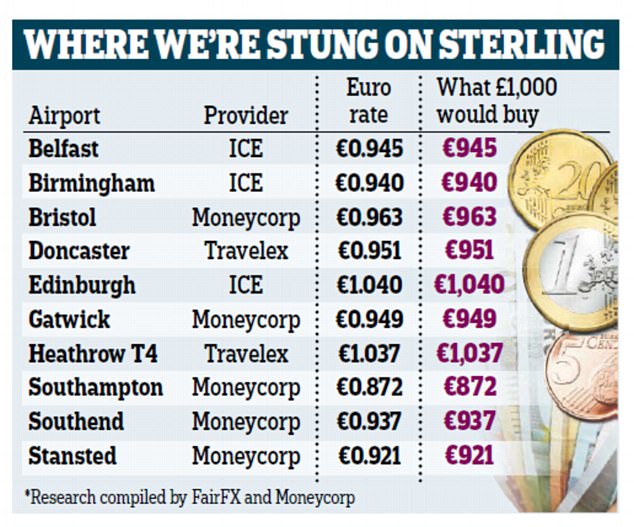 ‘They have always offered bad rates but over the past couple of years the gap between the market rate and what we get seems to be getting wider and wider.

‘Holidaymakers need to get savvier and avoid the airport bureaux at all costs unless they have bought the currency ahead of time and are just picking it up. Buying in advance will get travellers a much better rate.’

Experts say the pound’s eight-year low against the euro is down to stronger-than-expected growth in the Eurozone economy during the first half of the year and worries about Brexit. The pound continued to fall throughout yesterday to 1.083 euros last night – down 0.6 per cent over the day and 0.75 per cent since Tuesday.

Figures show that in the past six months the pound has fallen 8.7 per cent against the euro. It is down 20.2 per cent compared to two years ago. 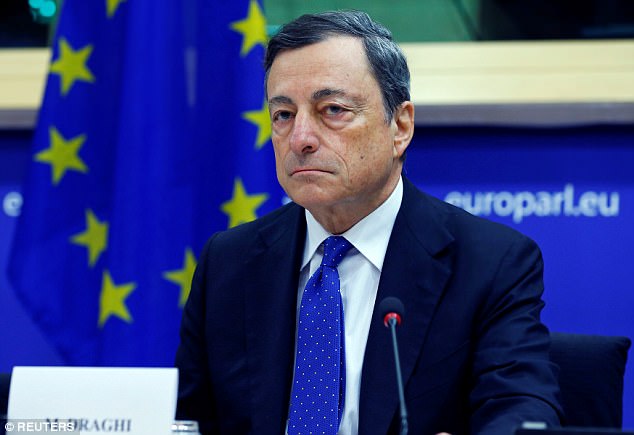 It comes ahead of a speech tomorrow by European Central Bank chief Mario Draghi at a key global gathering of policymakers in Jackson Hole, Wyoming

It comes ahead of a speech tomorrow by European Central Bank chief Mario Draghi at a key global gathering of policymakers in Jackson Hole, Wyoming. It is thought that whatever Mr Draghi says could impact the currency markets further, which could either spell further bad news for British holidaymakers or give them a boost depending on how his speech is received.

Adrian Lowcock, investment director of Architas, said that in the UK ‘the Brexit vote and snap General Election have weighed on the pound, keeping it low… This is likely to continue whilst Brexit negotiations continue.’

Pauline Maguire, retail director at Moneycorp, said: ‘The reason for our higher airport rates is the significant cost associated with operating there – from ground rent and additional security, to the cost of staffing the bureaux for customers on early and late flights.’