Holiday’s clutch jumper gave New Orleans a one-point lead, but Brooklyn’s Ed Davis was assessed a technical foul shortly after and Holiday made a free throw before Anthony Davis leapt to tip Joe Harris’ inbound pass to himself as time ran out.

D’Angelo Russell hit six 3-pointers on his way to a 24-point performance for Brooklyn, but he committed a pivotal turnover with 7 seconds left when his pass intended for Caris LeVert sailed out of bounds. Although the Pelicans were down by a point and the shot clock was off, New Orleans chose not to foul right away and the crowd was screaming nervously for the Pelicans to put a Nets player on the foul line just moments before the turnover.

New Orleans quickly inbounded the ball to Holiday, who dribbled toward the key for his decisive 17-foot pull-up.

Anthony Davis missed 13 of his 19 shots in an off night by his standards, but still finished with 18 points, 14 rebounds and five blocks as New Orleans improved to 4-0. Elfrid Payton scored 17 points but left in the final minutes with a left leg injury.

The Nets combined for 19 3s in all on 40 attempts, but they could have used one more when LeVert let it fly from deep with about 25 seconds left. It missed and Davis got the rebound, and the Nets’ Jared Dudley purposely fouled Holiday to put him on the foul line with 21 seconds left and Brooklyn leading by 3. Holiday made both free throws to pull the Pelicans to 115-114 and set up the dramatic finish.

Seven Nets players hit 3s and five made more than one. Reserves Shabazz Napier and Spencer Dinwiddie each hit three from deep.

LeVert was the only Brooklyn player to struggle from long range, missing four of five. But he still found a way to score 21, while Napier finished with 16

The Nets made 10 of 19 3-point attempts in the first half, when Russell made his first four and had 18 points.

That sharp shooting helped Brooklyn open up a lead as large as 13, at 66-53, on LeVert’s driving layup as he was fouled by Holiday late in the second quarter.

Davis’ dunk and E’Twaun Moore’s pull-up from 16 feet pulled the Pelicans back to 66-57 by halftime.

Nets: Dinwiddie and Allen Crabbe each scored 11. … Brooklyn is 61 of 141 (43.3 percent) from 3-point range in its past four games. … The Nets had 26 total assists and have 20-plus assists in each of their five games so far. … Have now lost three straight to the Pelicans after losing both meetings last season.

Pelicans: Moore had 15 points and Julius Randle scored 14. … Davis’ fourth block of the game gave him 1,000 for his career. … Veteran Wesley Johnson saw his first action of the season in the second quarter, when Darius Miller went to the locker room with a bruised quadriceps. Johnson scored three points to go with two steals and a block in nine minutes. 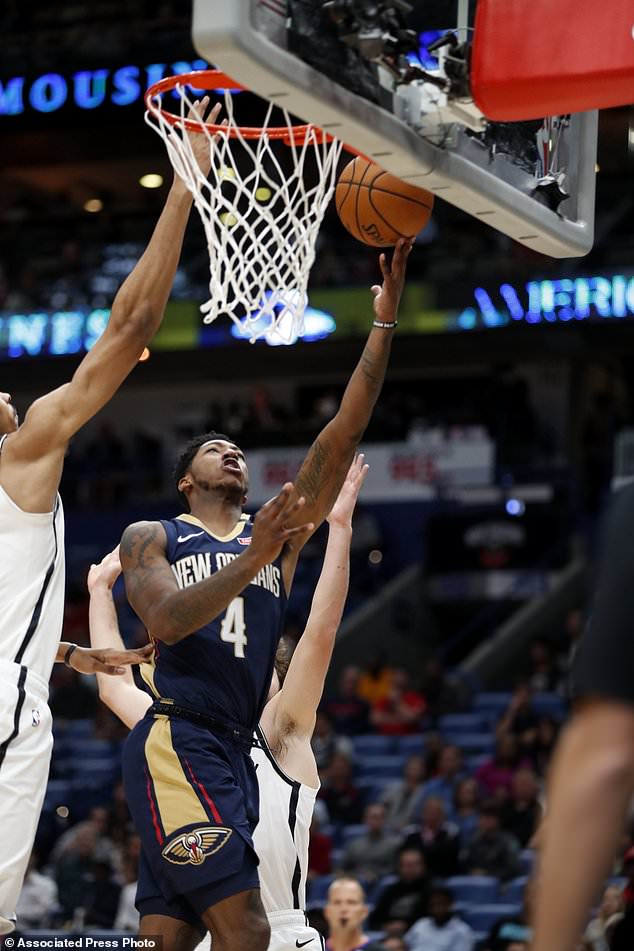 New Orleans Pelicans guard Elfrid Payton (4) goes to the basket in the first half of an NBA basketball game against the Brooklyn Nets in New Orleans, Friday, Oct. 26, 2018. (AP Photo/Gerald Herbert) 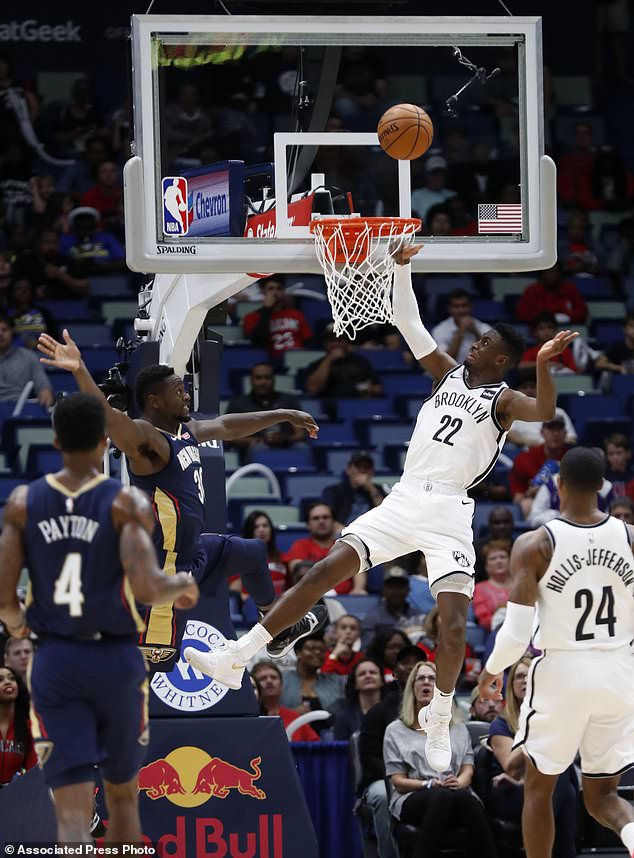