The British actress set to light up Tinseltown: Holliday Grainger heads to Hollywood after wowing critics with performances in hit BBC thriller The Capture

Holliday Grainger is seizing her chance to conquer Hollywood after acclaimed performances as a detective in BBC surveillance thriller The Capture.

The British actress, 34, will play a female superhero in science-fiction blockbuster Mickey 7.

And industry sources say this is ‘just the beginning’ for Holliday after she caught the eye of Los Angeles producers.

She is now being discussed in Hollywood as the ‘next big thing’.

Holliday Grainger, 34, is now being discussed in Hollywood as the ‘next big thing’, insiders say

Filming of her first cinema leading role has begun at Warner Bros studios near Watford, with Holliday starring opposite British heart-throb Robert Pattinson, 36.

Mickey 7, which also features Australian actress Toni Collette, is based on a novel by Edward Ashton and tells the story of a superhero who joins a human mission to colonise an ice world.

An insider on the film said: ‘Holliday is really enjoying herself. It’s something really different for her after The Capture. She has been seen by the nation playing a tough detective – but now she is off to space.

‘She has been somewhat excitable on set and she is loving being part of a film that couldn’t have a more different genre for her.’

It is understood casting directors are delighted Manchester-born Holliday is a redhead, as they are in demand across Hollywood.

Holliday, who has toddler twins with her partner, The Crown actor Harry Treadaway, 38, is directed in Mickey 7 by South Korean Bong Joon-ho, whose black comedy thriller Parasite won a Best Picture Oscar in 2020. 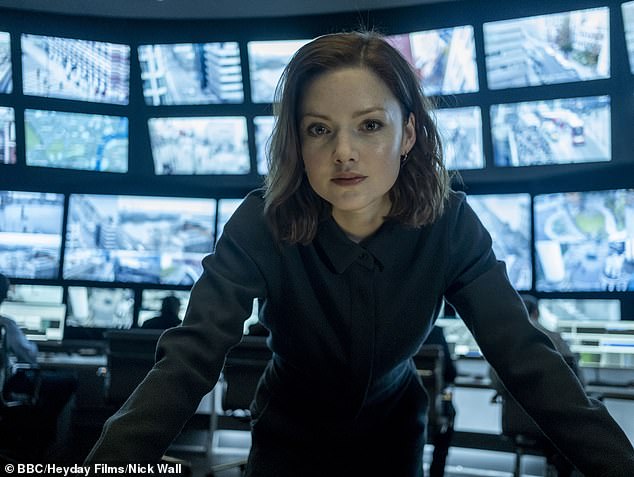 Just days ago in the finale of The Capture, more than six million viewers saw Holliday’s character DCI Rachel Carey expose the truth about the politician played by Paapa Essiedu.

She studied English at Leeds University and appeared in TV dramas Where The Heart Is and Waterloo Road before finding fame playing Lady Constance Chatterley in a BBC remake of Lady Chatterley’s Lover in 2015.

Two years later she landed her role on the first series of The Capture.

In 2020, it was reported that the thriller’s producers had agreed to put the second series on hold after she revealed she was pregnant with twins by her partner Harry.

That series finally aired from the end of last month.