Word on the wire is that The Capture, BBC1’s intriguing new six-part surveillance thriller, has all the water-cooler potential of Bodyguard. The complex story of an innocent man falsely accused in the ‘post-truth’ era will keep even the most observant armchair sleuth on their toes. It is a timely production, taking on such hot topics as fake news and the power of the intelligence services.

It stars the superb Holliday Grainger as ice-cool cop DI Rachel Carey and Callum Turner (War And Peace) as a soldier caught in a hellish hi-tech web. And she has high hopes for the show. ‘No one could foresee the success Bodyguard,’ she admits, ‘but the moment I saw the script for The Capture I knew it had that certain something. It’s a production I would definitely want to watch.’

In The Capture, Holliday Grainger stars as ice-cool cop DI Rachel Carey and Callum Turner (War And Peace) as a soldier caught in a hellish hi-tech web

At 31, Grainger has already appeared in her share of ground-breaking dramas, including JK Rowling’s Strike series, The Borgias and Patrick Melrose, in which she appeared alongside Benedict Cumberbatch. ‘He’s so smart,’ she enthuses. ‘He brings out the best in you.’

Grainger is equally passionate about her new role, admiring the steely reserve of her character of DI Carey. ‘She’s married to the job and ambitious,’ she says. ‘There’s a quiet confidence to her and she’s very tenacious in her quest for truth and justice.’

Grainger spent most of her formative acting years in period dramas (‘seven years in a corset’, she sighs), at one point doing TV versions of four classics in a row. The call of the corset hasn’t deserted her yet. ‘They’re quite addictive,’ she says. ‘And I look OK in one too.’

In person, she’s funny and fan-like in her demeanour. But, like Cumberbatch, she’s deadly serious about her work. She researches her roles rigorously and went to extraordinary lengths to get Carey right. ‘I met people from counter-terror and I shadowed a young woman detective in the homicide department for a week,’ she reveals. ‘I was shocked by the amount of cases they have to juggle.’

Grainger went to Hollywood in 2016 for The Finest Hours, a high-seas Disney drama that unfortunately failed to float boats at the box office, but she has recently enjoyed success with Animals, a drug-buddy movie set in Dublin that had the critics purring.

The darkly debauched story was written and directed by two women, and has two strong female leads. Grainger believes that such progress has been made, in part, because of #MeToo. She also maintains that the movement has enabled freer exchanges on-set.

‘There’s a bedroom scene at the beginning of The Capture,’ she says, and part of me was thinking, “Oh here we go, are we really going to introduce my female character with a sex scene?” I’d normally put my foot down and say, “I’m not getting naked in the first episode.” But the fact that Ben [Chanan, writer-director] wanted my opinion is a sign of positive change. It’s significant that he came to me and said, “Is it too much?” Pre-#MeToo we might not have even been having that conversation.’

Despite a lifetime in showbusiness, Grainger is notoriously private. ‘I’m not single,’ she says of her current relationship status, but prefers not to elaborate on personal details. She owns a house in Manchester and is currently renting her home in London, thanks to an estimated worth of £4.1 million. ‘I’m away a lot,’ she shrugs. ‘But that’s life.’

She has just received the script for Strike: Lethal White by Robert Galbraith (J K Rowling’s pseudonym), which reprises the roles of DI Cormoran Strike (Tom Burke) and his sidekick Robin Ellacott (Grainger).

She cheerily recalls her first encounter with the writer. ‘It was at the read-through for the first season of Strike,’ Grainger laughs. ‘I walked into the room and it was, “Holy s***, everyone and his dog are here.” I immediately ran to the toilet to compose myself.’ 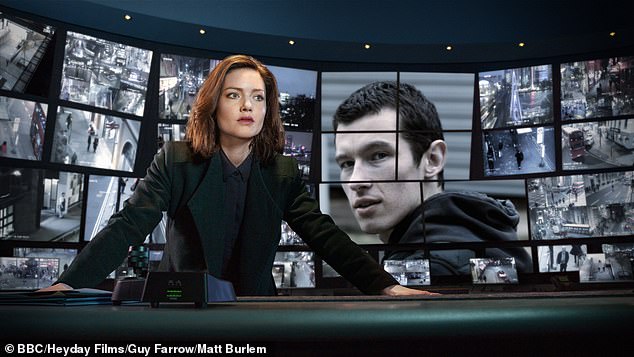 Grainger spent most of her formative acting years in period dramas (‘seven years in a corset’, she sighs)

It was there she ran into the creative power behind the Harry Potter empire. ‘She’d obviously done the same thing as me,’ cackles Grainger. ‘So, we were both cowering in the loo. I said, “Are you hiding? I’m hiding too!” ’

Quite what The Capture’s Rachel Carey would make of such lily-livered behaviour doesn’t bear thinking about.

‘It would probably just be a look,’ Grainger says, adopting Carey’s dispassionate gaze. ‘That’s all it would take.’

‘The Capture’ begins on September 3, BBC1 at 9pm