Holly Willoughby met three of her youngest fashion followers live on This Morning.

Triplets Amelie, Maya-Albertine, and Etta, from Birmingham, are 17 months old, and have a burgeoning Instagram following to rival Holly’s own since their mother began dressing them in identical outfits inspired by the TV host.

The adorable trio have posed for snaps every day for the past month in matching looks, which their mum Rebecca Wooldridge, 44, shares with their 2,000 followers.

On Monday the girls came face to face with their style inspiration on the show, and it all proved too much for one who burst into tears during the segment.

Holly’s co-host Phillip Schofield managed to keep two out of three triplets entertained, but failed to catch hold of the third before she crawled out of shot.

Holly was delighted to see the triplets on the daytime show all sporting identical outfits to her – a dungaree dress and a white shirt – and joked that it was actually her taking inspiration from them.

Rebecca, who conceived the children through IVF, told Holly: ‘In terms of someone who is an ambassador of positivity and fun I couldn’t think of a better person.’

Birmingham-based triplets Amelie, Maya-Albertine, and Etta, (L-R) 17 months old, have taken the internet by storm with their daily pose showing off their identical outfits

Determined to show the world how cute triplets are, Rebecca has snapped her girls at home to give people their version called ‘triple the look’

The triplets, who were born in October 2016, were conceived through IVF after Rebecca and her husband David, 49, spent a decade struggling to start their own family.

Determined to show the world how cute her triplets are, Rebecca has snapped her ‘little miracles’ at home to give people their version of Holly’s popular outfits on a feed called ‘triple the look’.

Meeting their fashion idol appeared to be overwhelming for Maya-Albertine – also known as Bertie – who cried in her mother’s arms after crawling off the This Morning set.

Phil quickly picked up one triplet as she made a bid for freedom from the rug and set about keeping them quiet by looking at a picture book.

Holly meanwhile took control of the interview, with mother Rebecca explaining why she feels the presenter is a great role model for her daughters. 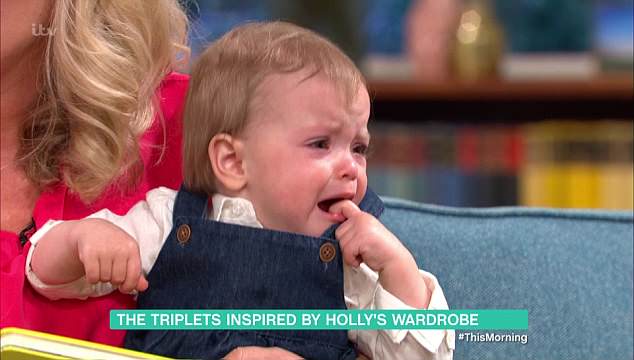 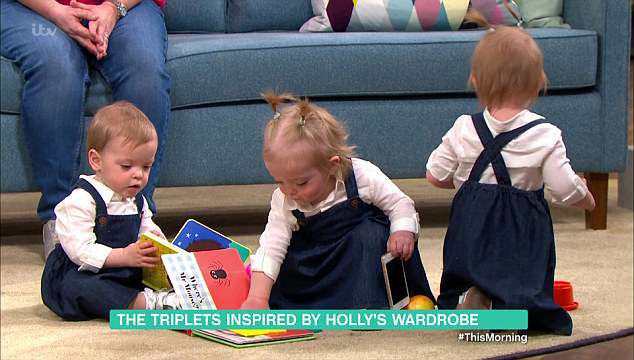 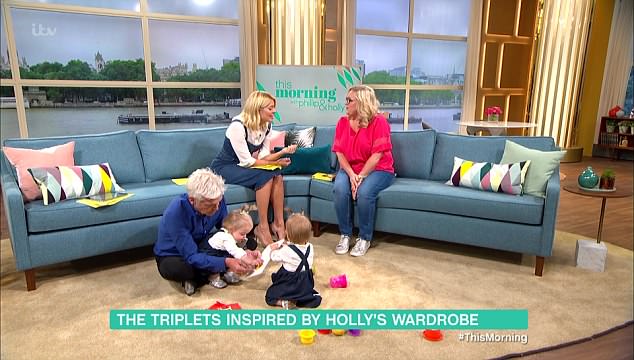 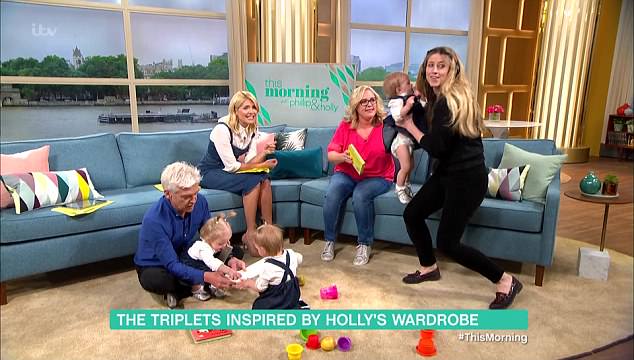 From matching tights, jumpers, dresses, shoes and headbands, the girls are always wearing the same outfits in their living room as their mum quickly takes the photos.

Rebecca, a full time mum, said in a previous interview: ‘We love Holly Willoughby and after seeing her ‘today’s look’ posts on Instagram, I decided to create my own daily posts.

‘The triplets love dressing up and after deciding to call our daily style ‘triple the look,’ I began posting adorable images every day.

‘I tend to post them at the same time as Holly at 10.30am, it’s all just for a bit of fun really but if it can put a smile on people’s faces then it’s worthwhile.’

And the whole family get involved in taking the daily pictures, with her son helping to keep the triplets camera-ready. 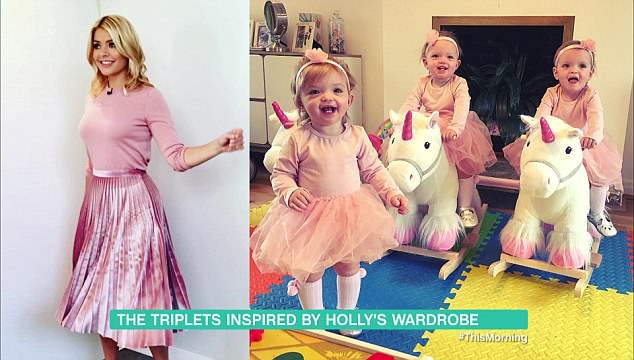 And the whole family get involved in taking the daily pictures, with her son helping to keep the triplets camera-ready 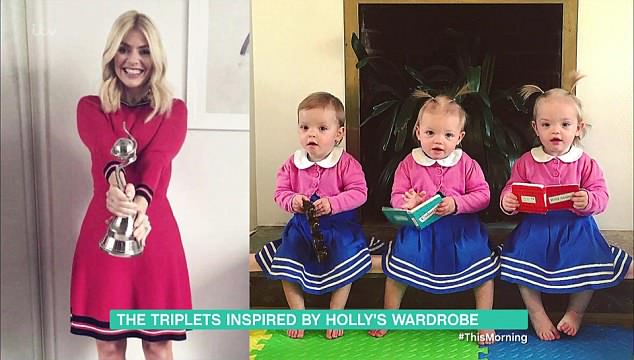 From matching tights, jumpers, dresses, shoes and headbands, the girls are always wearing the same outfits in their living room as their mum quickly takes the photos 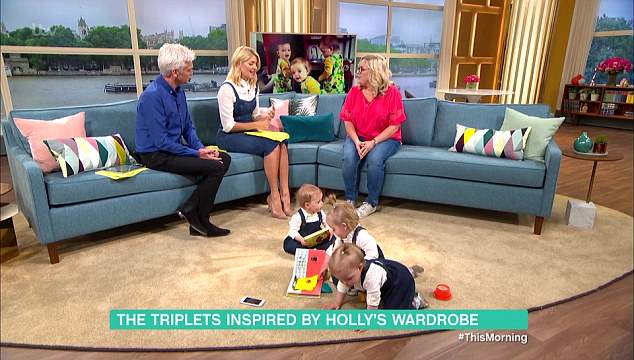 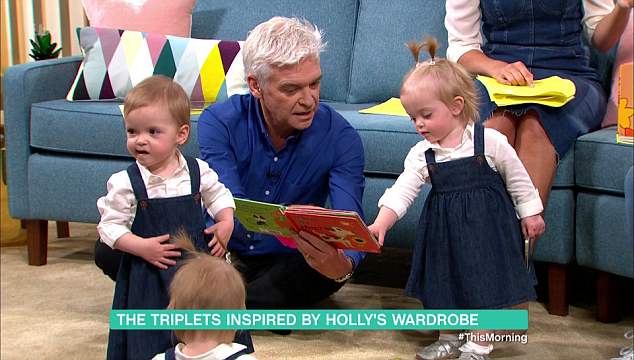 Phillip, who’s own daughters are grown adults, looked in his element as he kept the tots entertained

‘I always make sure the girls are wearing the same and I’ll often ask son, Felix, four, to play peek a boo behind the camera so they stay still,’ she added.

‘Unlike Holly I post the triplets fashion styles every day including the weekends.

‘If it’s a rainy day I will try and make sure they are wearing colourful clothes to brighten the mood of our followers.

‘I have been doing our ‘triple the look’ every day now for the past two weeks and I can’t see myself stopping anytime soon.

‘It’s lovely being able to dress the girls the same as I see it as a celebration of their identity as triplets, they are such little miracles.’ 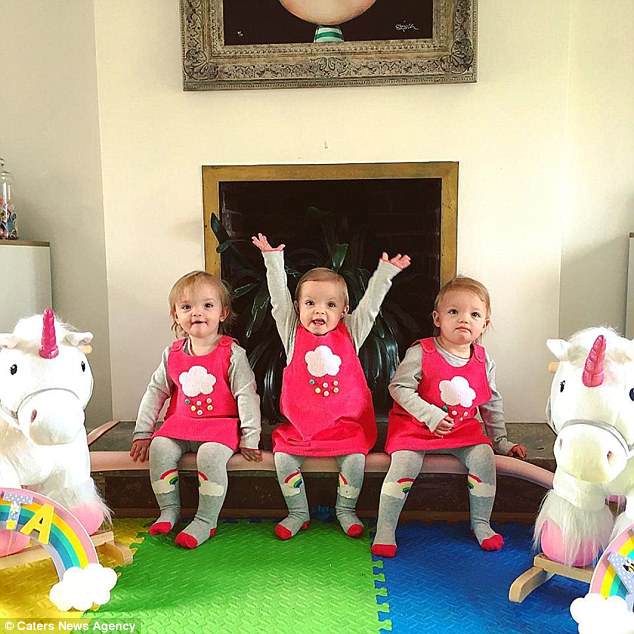 The triplets, who were born October 2016, were conceived through IVF after parents, Rebecca and David, 49, spent a decade struggling to start their own family 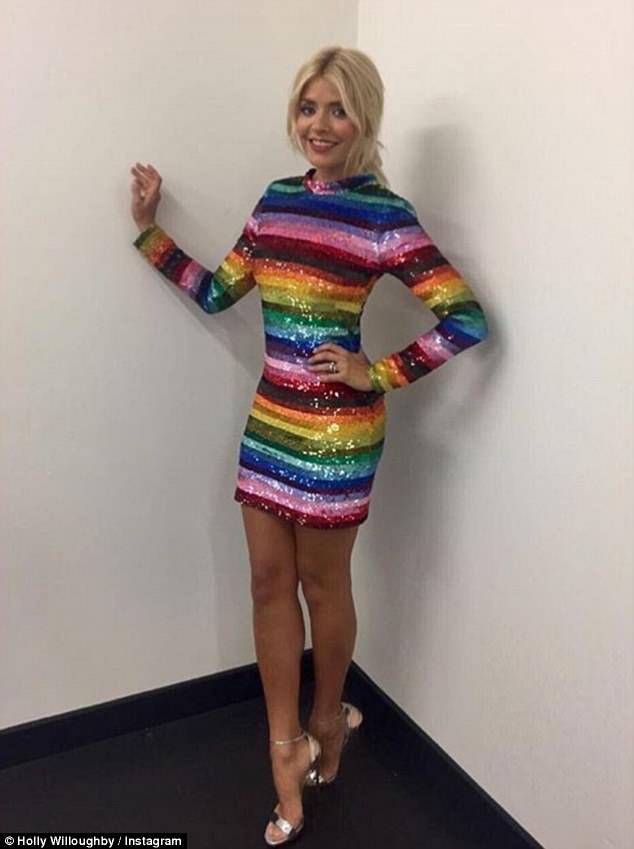 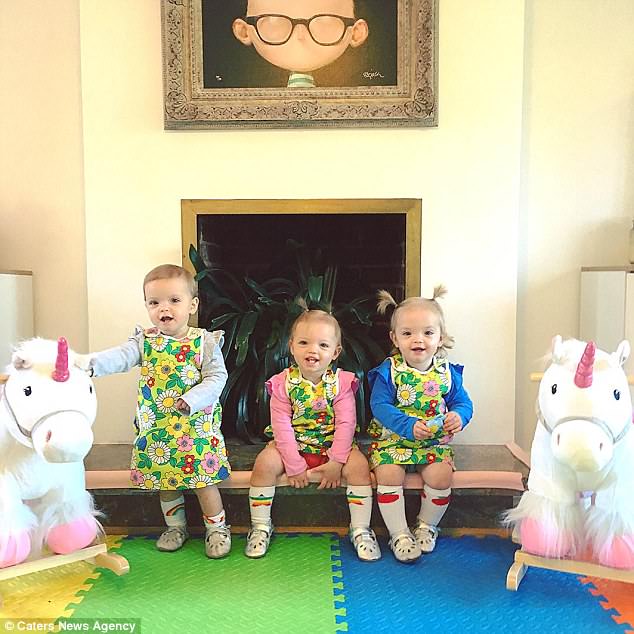 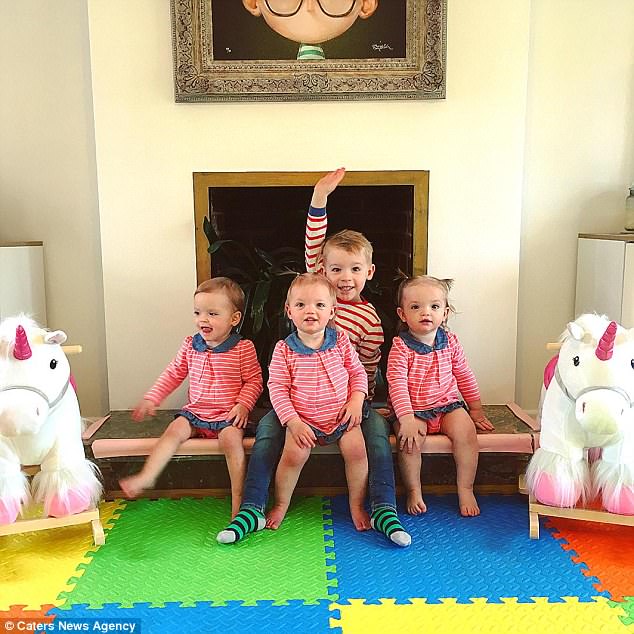 The girls were born weighing just 2lb6 and 2lb8, and Rebeccan now says she can’t imagine life without her ‘little miracles’

Speaking about their decade-long struggle to conceive, Rebecca said: ‘We waited 10 years for our dream family and after spending £60,000 it finally became a reality.

‘I’d been told by doctors that I had a low egg count but after seven years of trying IVF all over the world, I ended up falling pregnant naturally with Felix.

‘It then took over three years to then fall pregnant with the triplets in April 2016 after more IVF.’

But Rebecca’s birth wasn’t without complications after she was forced into early labour due to health complications.

‘I had to give birth to the triplets at 29 weeks as it was the only way to save my life,’ she admitted.

‘Thankfully after weeks in hospital both myself and the girls, Etta, Amelie, and Maya-Abertine were allowed home.

‘Since then it has been a rollercoaster but the girls are now at such a funny age.

‘They really giggle at each other and already have such a special bond.

‘To think they first weighed just 2lb6 and 2lb8, is crazy, I can’t imagine life without our little miracles.’ 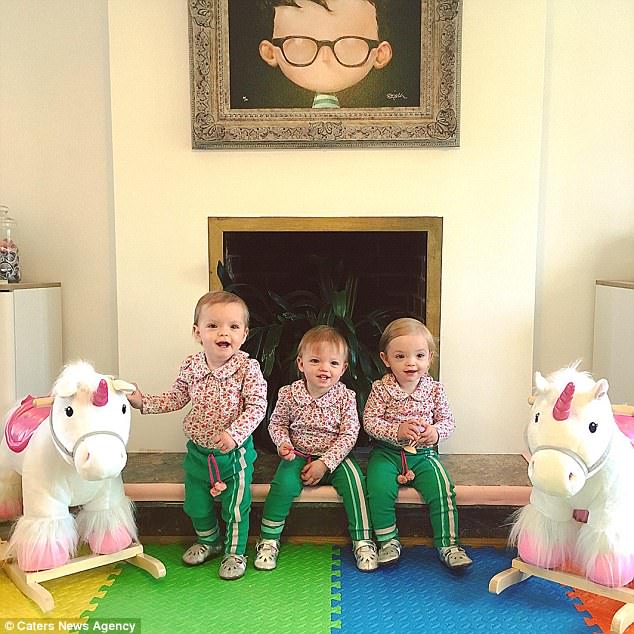