The hunt for ‘Hollywood Cat’: Elderly mountain lion that appeared on 60 Minutes and earned a profile in The New Yorker must be captured after it stalked and killed two pet dogs

Wildlife officials are seeking to capture a famous mountain lion, known as the Hollywood Cat or P-22, after it launched two deadly attacks on pet dogs.

The lion, which is tracked by National Park Service, has gained notoriety for successfully crossing the San Diego 405 and the Hollywood 101 freeways to get to the Griffith Park area. It has been featured on 60 Minutes and earned a 6,000- word New Yorker profile.

But as of late, the lion has been blamed for killing a leashed dog in the Hollywood Hills and allegedly attacking another in Silver Lake on Sunday.

The California Department of Fish and Wildlife and the National Park Service announced Thursday they plan to capture P-22 to evaluate his health and ‘determine the best next steps for the animal while also prioritizing the safety of surrounding communities.’

Wildlife officials will capture and evaluate the health of a famous mountain lion, known as P-22 or the ‘Hollywood Cat,’ after several encounters with locals and deadly attacks on two dogs

The agencies stated that the cat ‘may be exhibiting signs of distress.’

‘This is an unprecedented situation in which a mountain lion has continued to survive in such an urban setting,’ according to the DFW statement.

‘As P-22 has aged, however, the challenges associated with living on an island of habitat seem to be increasing and scientists are noting a recent change in his behavior. This underscores the consequences of a lack of habitat connectivity for mountain lions and all wildlife.’

The agencies stressed that they ‘do not require assistance’ in capturing the animal, and asked the public to refrain from any efforts to do so.

P-22 is one of the oldest mountain lions being tracked in the Southland area.

‘I was told 10 is considered to be old for mountain lions in the area and P-22 is 12,’ said Tim Daly of the California Department of Fish and Wildlife.

An official with the nonprofit National Wildlife Federation said she was confident that federal and state authorities would make the right decision regarding the lion after a health evaluation.

‘P-22 has given us so much,’ Beth Pratt, California regional executive director of the National Wildlife Federation, said in a statement.

‘He is a beloved wild mountain lion that survived against all odds, and his plight of being trapped in Griffith Park after making a perilous journey across two of the busiest freeways in the country showed the world how harmful our roadways can be to mountain lions and all wildlife.

‘He captured the imagination of people around the globe, and his story inspired the building of the world’s largest urban wildlife crossing outside of Los Angeles so that other area mountain lions don’t suffer the same fate.’

In November, P-22 ripped apart the chihuahua named Piper as it was out on a walk near the Hollywood Reservoir at Creston and Durand Drives, clamping down on the mutt and tearing it away from its horrified walker.

‘I felt the tug and I heard Piper squeal,’ the dogwalker told KTLA. ‘I turn around and I just saw a face. I didn’t know what it was.

‘It was like a two- or three-second struggle… He didn’t growl at all. I didn’t even hear him. I never had a chance.’

Daniel Jimenez, Piper’s owner, was celebrating his daughter’s birthday when he received a text from the walker which read: ‘The mountain lion attacked and took away your dog. Killed your dog.’

‘We thought it was a joke, but it turned out it was real and we were just shocked,’ said Jimenez, who said he was ‘devastated’ by the loss.

The same mountain lion is suspected of killing a koala after sneaking into the Los Angeles Zoo in 2016.

The lion was first captured and outfitted with a tracking collar in 2021. He weighed 123 pounds at the time of his last capture. 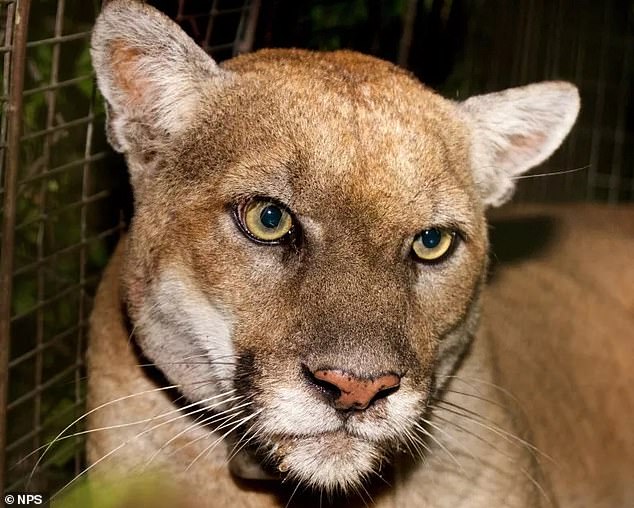 P-22 has been featured on 60 Minutes and even earned a 6,000- word New Yorker profile, but of late the lion has been blamed for killing a leashed dog in the Hollywood Hills and allegedly attacking another in Silver Lake on Sunday 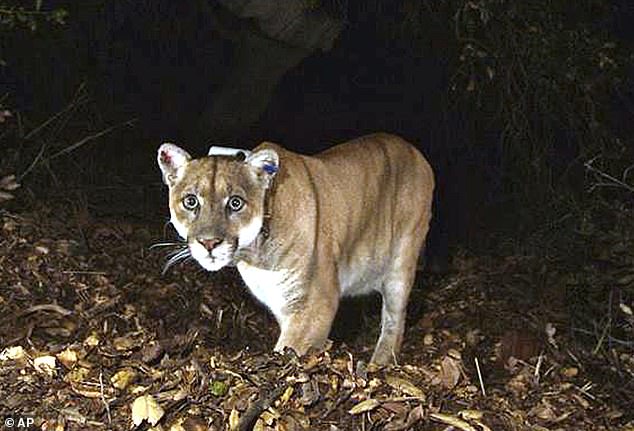 The lion, which is tracked by National Park Service, has also gained notoriety for successfully crossing the San Diego 405 and the Hollywood 101 freeways to get to the Griffith Park area