He is known as one of the nicest guys in Hollywood.

And Oscar winner Matt Damon, 50, proved it yet again on Sunday when he was seen giving an airport employee a bear hug.

The Good Will Hunting star embraced the fan after landing via private jet in Sydney with his A-list pal, Chris Hemsworth.

Mr Nice Guy! Hollywood star Matt Damon, 50, (pictured) gave an airport employee a bear hug as he disembarked from a private plane with Chris Hemsworth in Sydney on Sunday

Matt was beaming as he politely chatted with the airport employee while pal Chris disembarked the private jet along with their kids.

The staff member looked giddy after his interaction with the megastar. 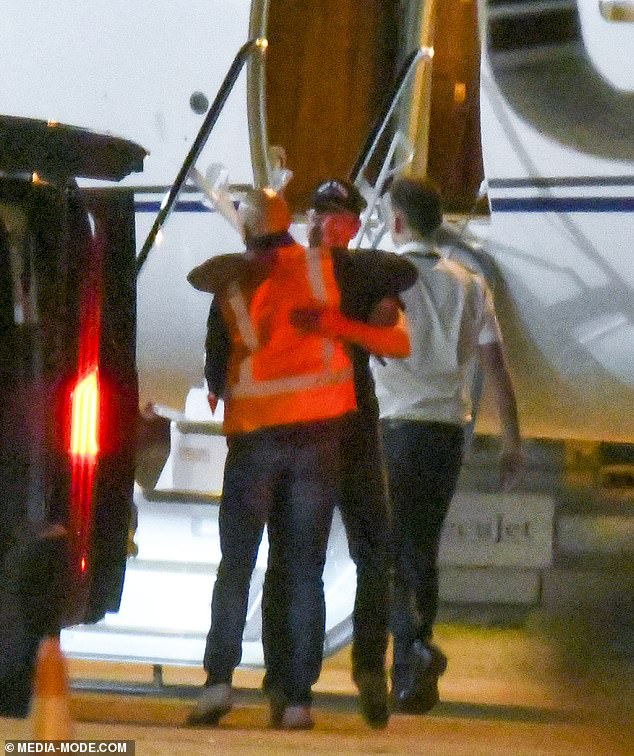 Bring it in! Matt eagerly embraced the man on the tarmac

Meanwhile, Chris barreled down the stairs soon after Matt.

The Thor actor looked like he was all business ahead of resuming filming for the new instalment of Thor.

Matt kept it casual wearing a black T-shirt and a pair of black pants for the flight, along with a trucker cap. 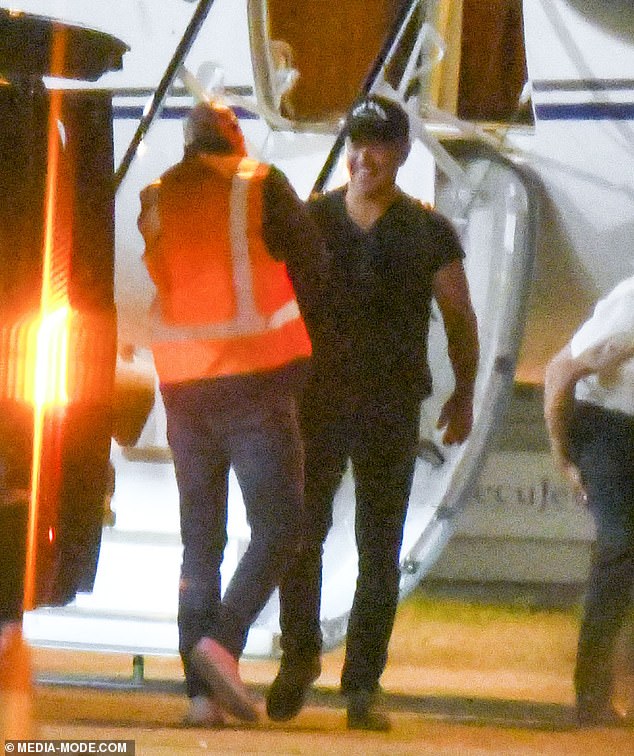 Good natured: Matt was beaming as he politely chatted with the airport employee while pal Chris disembarked the private jet along with their kids 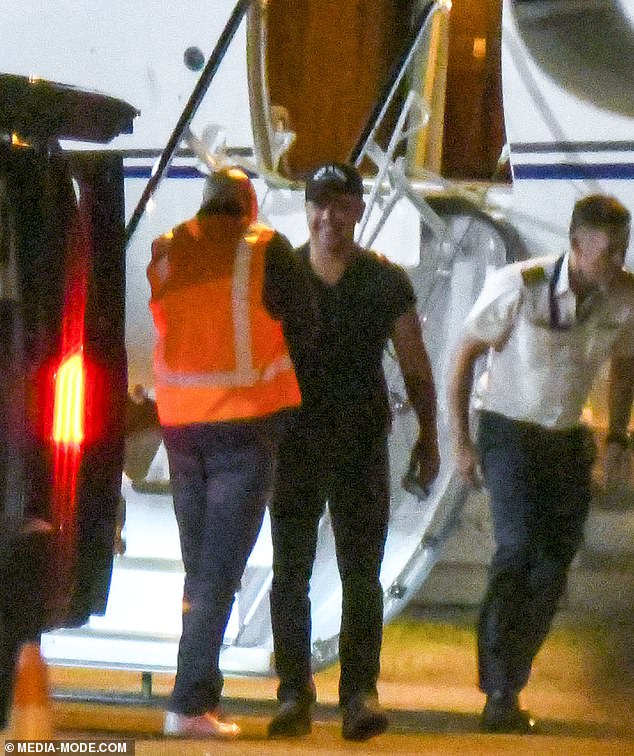 New pal: Matt smiled and laughed as he spoke with the airport worker, who was wearing orange hi-vis 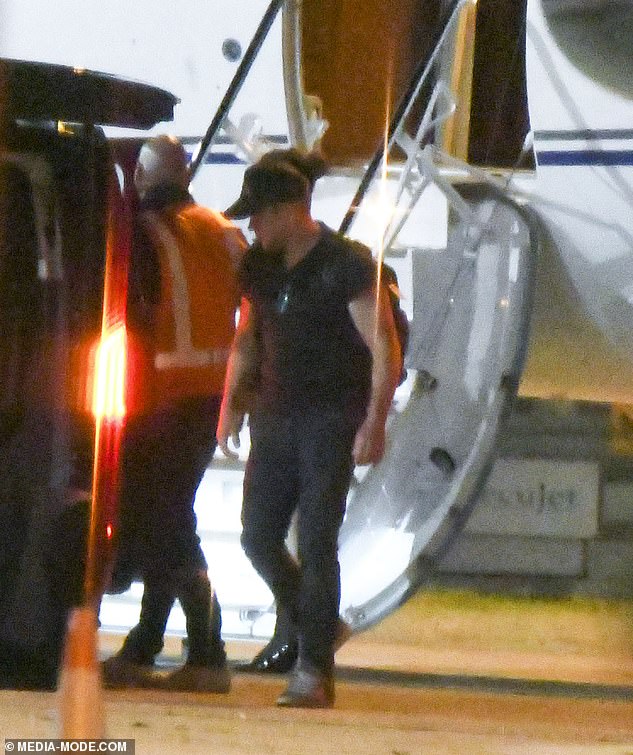 Casual cool: Matt kept it casual wearing a black t-shirt and a pair of black pants for the flight along with a trucker cap

He carried his belongings in a casual backpack which he wore over his shoulders.

Meanwhile, Chris took the opportunity to show off his bulging biceps on the jet.

He wore a sleeveless workout top along with a pair of black shorts.

He finished his look with runners and a green cap. 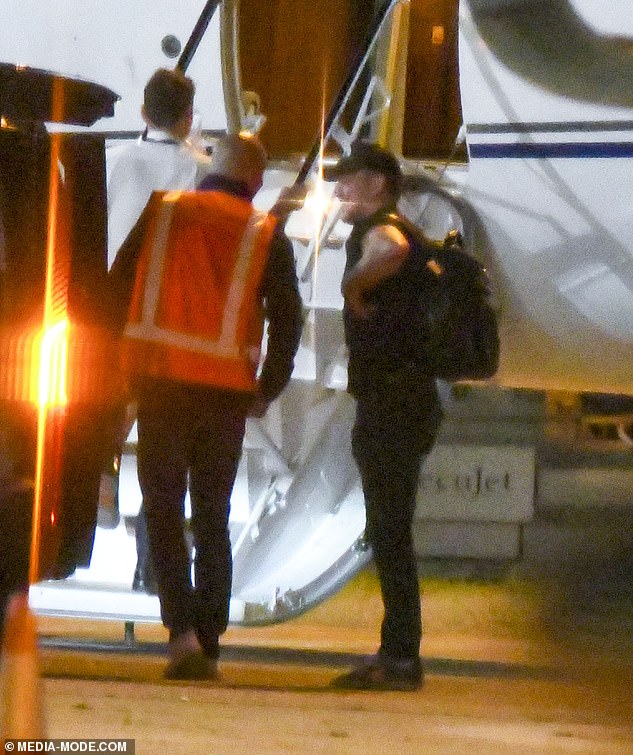 Day wear: He carried his belonging in a casual backpack which he wore over his shoulders

The two Hollywood actors got into a black SUV after disembarking the plane.

Earlier this month, Matt enjoyed a well-deserved holiday to surf haven Noosa alongside his family and friends – including Chris’ younger brother, Liam, 31.

According to the Courier Mail, the group was also made up of Matt’s wife Luciana and their children, and close pals Luke and April Munro – who described the trip as ‘magical’. 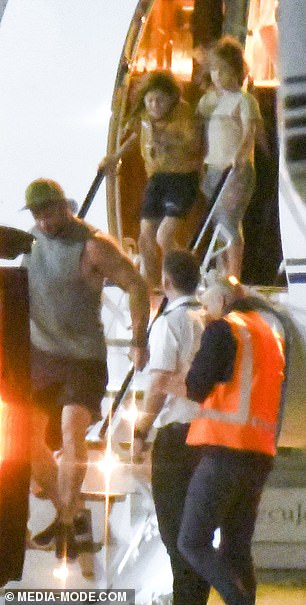 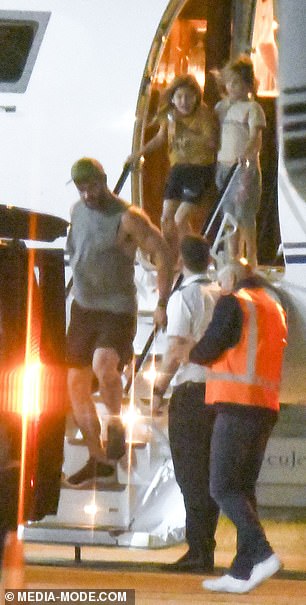 Muscles: Meanwhile, Chris took the opportunity to show off his bulging biceps on the jet wearing a sleeveless top for the flight

Noosa is a regular haunt for both the Hemsworth brothers and Matt, who have all been spotted spending time at Double Island Point and Rainbow Beach in the area years prior.

Chris and Matt first holidayed at the tourist hotspot together in 2018, while the siblings enjoyed a trip there last July alongside Chris’ wife Elsa Pataky and their children; India, Sasha and Tristan.

The star took a photo with an elated ice delivery driver Rob Gough on the day, who described Matt as a ‘top bloke’. 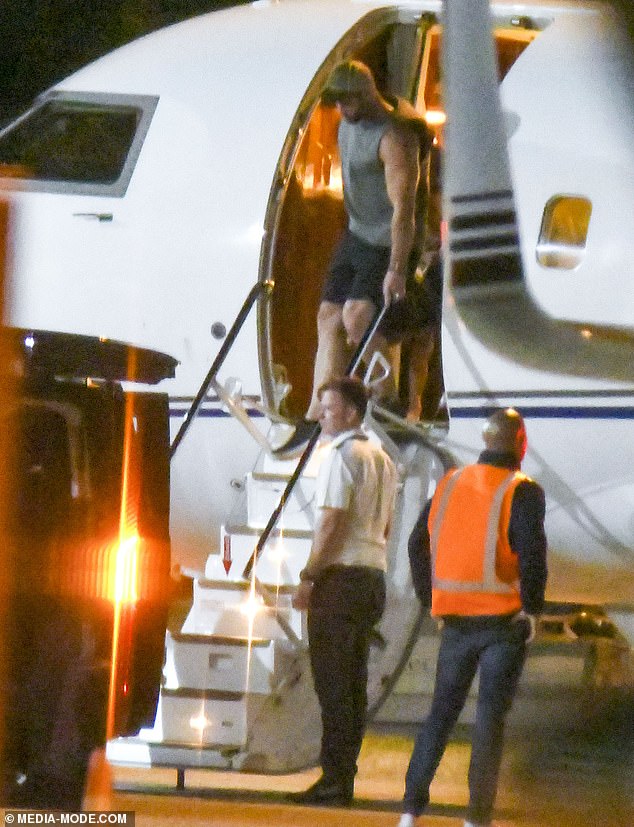 Shape: Chris proved he was ready for the hectic filming schedule of Thor with his pumped-up chest and arms

‘What a privilege it was to meet and share waves with these guys,’ he said.

April shared a photo of Liam in his surfing gear, captioned: ‘Just never gets old for these two!’

She also shared a stunning image of the entire group around a campfire, captioned: ‘A magical night on the water, by the fire, under the moon.’ 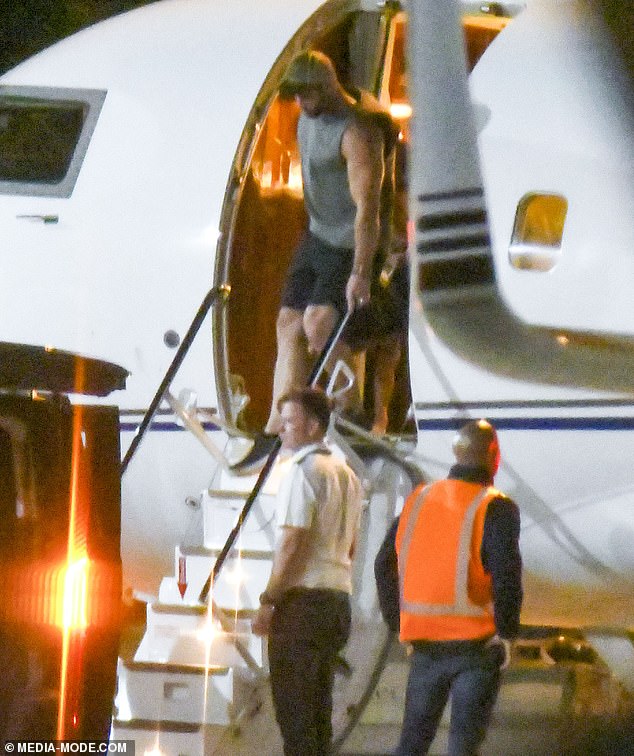 Impressive: The muscular Hollywood star looked impressive as he disembarked the jet 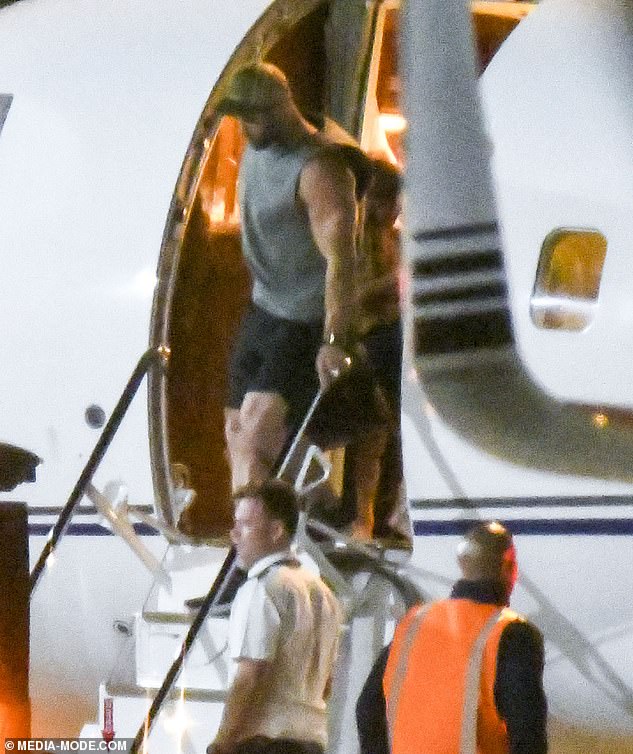 Big guy! The actor proved he is fit as ever as he walked down the stairs

It’s possible that film star Chris couldn’t attend the getaway due to his hectic film schedule.

Matt had made a brief cameo in Thor: Ragnarok, where he played Thor’s brother Loki in a short skit.

In the 2017 film, the play was called ‘The Tragedy Of Loki’ and featured four celebrity cameos – Matt Damon as Loki, Luke as Thor, Sam Neill as Odin, and Cate Blanchett as Thor’s evil sister Hela. 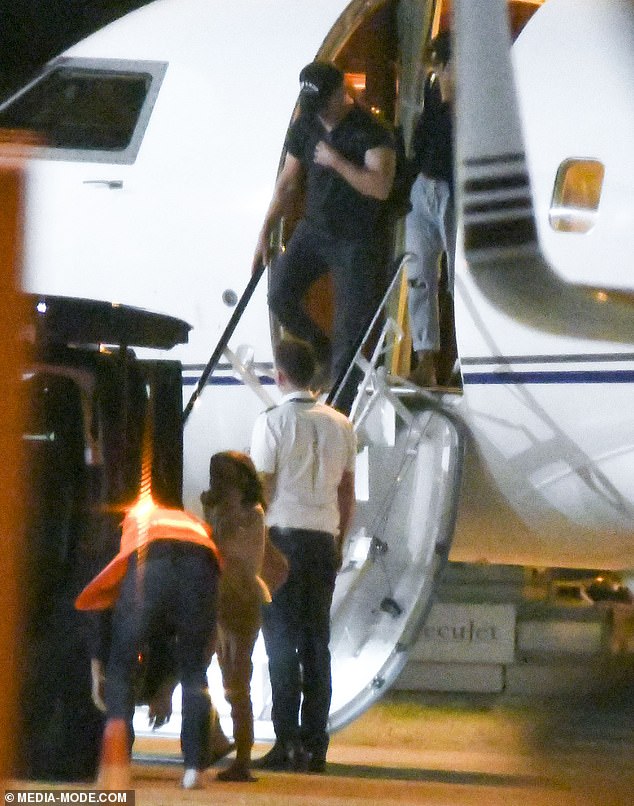 Dad duties: Matt appeared to head back into the aircraft to collect his children’s things at one point

Fast movers! The two Hollywood actors got into a black SUV after disembarking from the plane

The latest installment of Thor is being filmed in Australia after receiving a $24.1million location incentive grant from the Federal Government.

Directed by Taika Waititi, the film is expected to bring more than $178million to the local economy, create 2,500 jobs and enlist services from about 1,650 businesses.

Thor: Love and Thunder is due for cinematic release in May 2022. 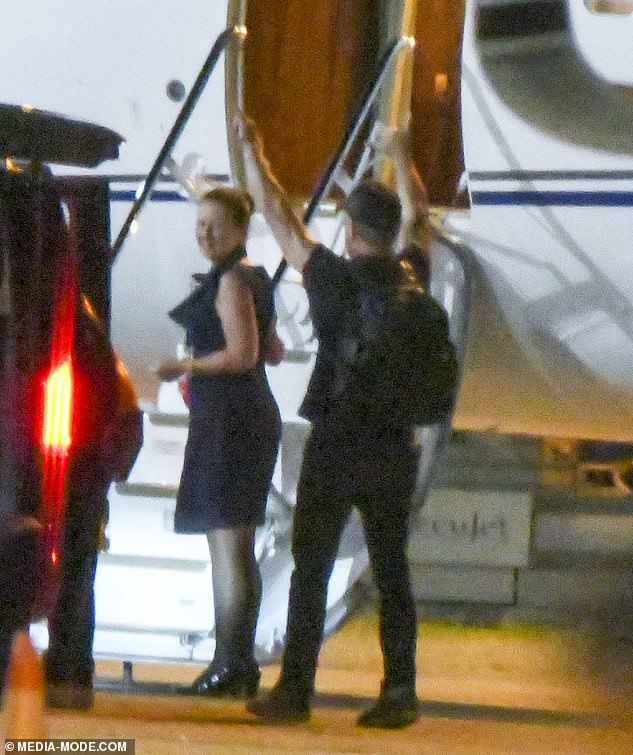