A 20-year-old student was killed and 11 others injured when a van carrying a Massachusetts college rowing team collided with a pickup truck in Florida.

Grace Rett, a sophomore at College of the Holy Cross, died in the horror crash at an intersection in Vero Beach around 7.30am Wednesday.

Eleven other people, were injured, including some of Rett’s teammates and the pickup truck driver.

The Vero Beach Fire Department said three people were transported to an area hospital by helicopter, four by ambulance and four others by another means as a precaution.

Authorities are still investigating the cause of the crash but said it appeared the van was turning when it was struck by the pickup. They said its possible the van driver, a Holy Cross student, failed to yield before making the turn.

Photos from the scene showed significant damage to the front end of both vehicles.

Grace Rett (pictured), a 20-year-old student at College of the Holy Cross, was killed and 11 others were injured when a van carrying the Massachusetts school’s rowing team collided with a pickup truck in Vero Beach, Florida, on Wednesday morning 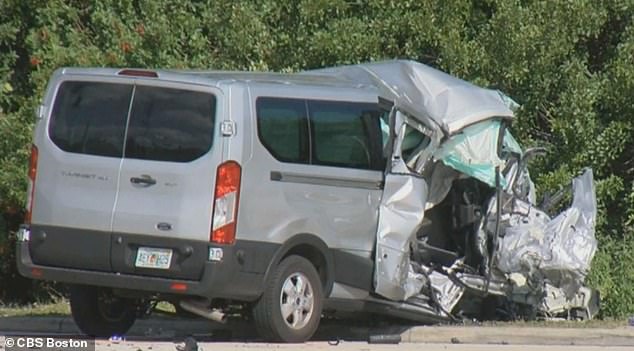 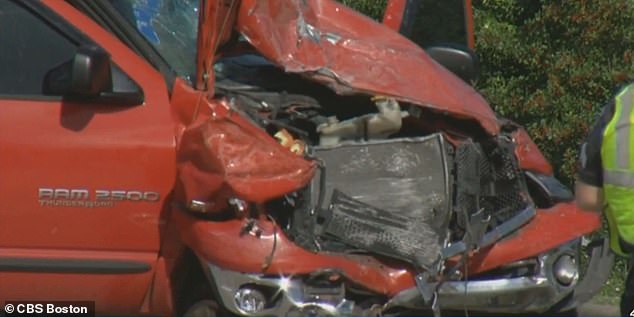 The driver of the pickup truck (pictured) was also injured in the crash, officials said

Rett was sitting in the front passenger seat when the crash occurred.

Vero Beach Police Chief David Currey said it is especially difficult to respond to the scene of a crash like this one that involves younger victims.

‘It hits home any time we deal with things like that,’ Currey said. 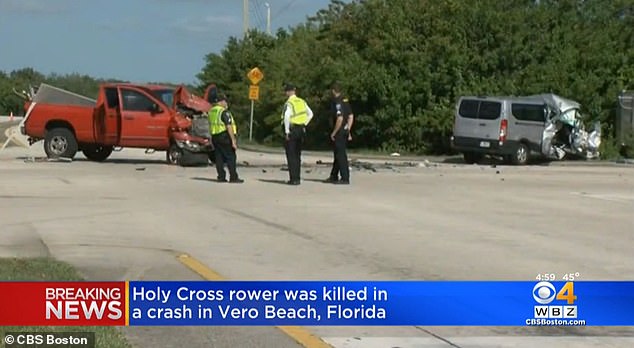 Authorities are still investigating the cause of the crash but said it appeared the van was turning when it was struck by the pickup. They said its possible the van driver, a Holy Cross student, failed to yield before making the turn

Rett had just celebrated her 20th birthday on Tuesday. The Uxbridge resident, who was majoring in English and psychology, had set a world record for indoor rowing by completing 62 hours straight on an erg machine last month.

‘Our community has suffered a tragic loss. I extend my deepest condolences to Grace’s family, members of the women’s rowing team and their coaches, and all who loved Grace,’ Holy Cross President Rev Philip L Boroughs said in a statement.

‘In our grief, we pray that the healing power of the love of Christ will touch their hearts and provide some peace. I ask that all members of the community support one another at this time and pray for the healing of those involved in the accident.’ 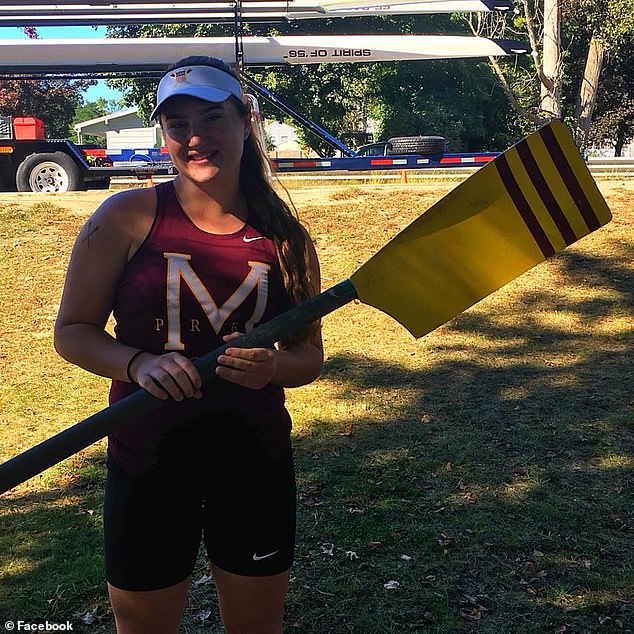 Rett had just celebrated her 20th birthday on Tuesday. The Uxbridge resident, who was majoring in English and psychology, had set a world record for indoor rowing by completing 62 hours straight on an erg machine last month 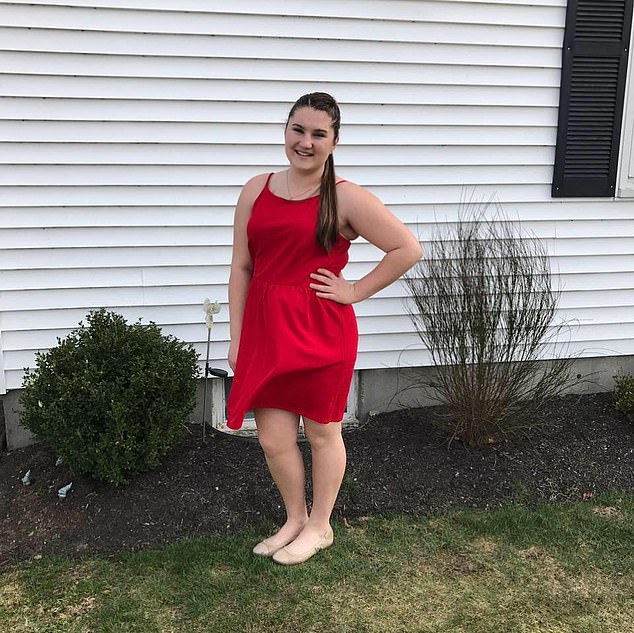 ‘Everyone who knew Grace was touched by her warm heart, tenacious work ethic and inspirational drive.

‘Our entire Holy Cross community is mourning today, and our focus is on supporting our Crusader students, families, faculty and staff, both here and in Florida.

‘Our prayers are with Grace’s family and all those injured in today’s events. We ask for everyone’s thoughts and prayers.’

Dean of Students Michele Murray said  the school is now focused on supporting Rett’s teammates in the wake of the tragedy.

‘I want them to know they are coming home,’ she said.

Murray said Rett’s family, Boroughs, Blossom and representatives from College’s Office of College Chaplains were on their way to Florida on Wednesday.

One of the students injured was identified as Maggie O’Leary, daughter of Waterbury Mayor Neil O’Leary.

The mayor’s office said Maggie had spoken with her parents, who are also headed down to Florida.

Several Worchester officials also shared their condolences after news of the crash broke.

City Manager Edward Augustus Jr wrote on Twitter: ‘The City of Worcester offers its support and heartfelt condolences to the Rev Philip L Burroughs and all those in the College of the Holy Cross extended community on today’s tragic accident in Florida.

‘Our thoughts are especially with the families of the women’s rowing team during this very difficult time.’

District Attorney Joseph Early tweeted: ‘We’d like to extend our condolences to the Holy Cross community and the family and friends of Grace Rett, a member of the women’s rowing team who lost her life today in a crash in Florida.’

Congresswoman Jahana Hayes released a statement saying: ‘A few moments ago, I learned of the terrible accident in Florida suffered by the College of the Holy Cross’ Women’s Rowing Team, including Maggie O’Leary.

‘Maggie worked as an intern in my office and alongside me at various community service events. During the course of her internship, she assisted constituents with casework and attended events on my behalf.

‘Maggie is a true leader and as her capstone project, she organized and led an amazing event with Girls Inc. in support of female empowerment and self-defense skills for women. I join my staff in sending our thoughts and prayers to Maggie. She will always be part of our family.’