Cornelia Frances’ former Home and Away co-stars have paid tribute to the actress following her death aged 77 this week.

The veteran performer played Morag Bellingham on-and-off between 1988 and 2017.

Ray Meagher, who played Cornelia’s on-screen brother Alf Stewart said on Tuesday: ‘Cornie was an incredibly loved and valued member of our cast over many, many years.’

Cornelia Frances dead at 77: Home and Away stars including Ray Meagher and Ada Nicodemou have paid tribute to the late actress who famously played Alf Stewart’s villainous sister, Morag

Ray, 73, added: ‘We had a moment of silence for her on set this morning and she’ll be sadly missed by both cast and crew.’

Fellow Summer Bay alumnus Judy Nunn and her husband Bruce Venables said their ‘goodbyes’ a week ago, according to The Daily Telegraph.

Judy, 73, said: ‘She died with the same grace and dignity with which she lived. Cornelia was a very close friend. I loved her dearly. I will miss you Corn, we all will.’ 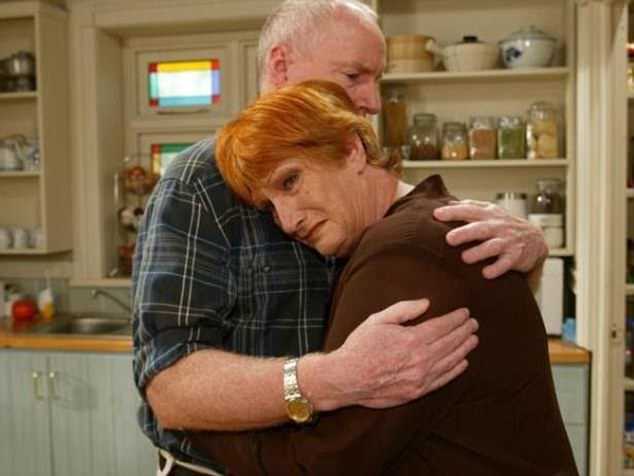 Touching: Ray Meagher, who played Cornelia’s on-screen brother Alf Stewart said on Tuesday, ‘Cornie was an incredibly loved and valued member of our cast over many, many years’

Home and Away stalwart Ada Nicodemou, 41, who has played Leah Patterson-Baker since 2000, also shared her condolences.

She said: ‘Cornelia was very loved and respected. She’ll be sadly missed. Lawrence [Eastland, Cornelia’s son], her family and friends are in our thoughts.’

Lynne McGranger, who is best known for her longtime portrayal of Irene Roberts, spoke warmly of the woman she had worked with for ‘many years’.

‘In a way she paved the way for women in Australian TV always playing such strong characters. My thoughts are with Lawrence and her family.’

Earlier this year, Cornelia expressed hopes that she would reprise her role as Alf Stewart’s villainous sister, Morag Bellingham, on Home and Away.

She told The Sunday Telegraph: ‘I would dearly love to go back to Summer Bay but haven’t heard anything as yet.’

Cornelia, who was also known for her roles in Prisoner and Sons and Daughters, died overnight in Sydney surrounded by her friends and family.

The Weakest Link host was diagnosed with bladder cancer over a year ago and, later, doctors told her the disease had spread to her hip and spine.