Home buyers were left disappointed today after rumours of a Stamp Duty overhaul failed to materialise in the Budget.

There has been some speculation that the Chancellor could tweak the tax to help stimulate the housing market.

However, Chancellor Rishi Sunak chose not to include any changes to the levy for UK buyers when delivering his package of reforms to Parliament this afternoon.

Currently, anyone buying a property that costs more that £125,000 and who isn’t a first-time buyer has to pay Stamp Duty.

Previously, it was believed that the Conservatives could radically reform the controversial tax by raising this threshold to as much as £500,000.

These plans were dropped from the Tory’s manifesto last year.

The Treasury did however use the Budget as an opportunity to make good on a manifesto commitment to introduce a Stamp Duty surcharge on UK homes bought by foreign buyers.

The Chancellor confirmed that from April 2021 a 2 per cent Stamp Duty surcharge will apply to overseas buyers.

The money raised from the surcharge, he says, will be used to help address rough sleeping.

Currently, some 61 per cent of receipts are generated in the South East and London.

Mary-Anne Bowring of residential property consultancy Ringley, said: ‘The falling pound has made housing more affordable to overseas buyers, while domestic buyers have had to contend with stagnant wage growth and ultra-low interest rates pushing up prices and eating away at their ability to save.

‘An increase stamp duty for overseas buyers will simply put things back to where they were before the Brexit vote and level the playing field for domestic buyers.’

The housing market saw a significant bounce in the lead up and immediate aftermath of the general election, with mortgage approvals for homebuyers soaring to their highest levels in four years in January.

But there are concerns that as coronavirus cases step up in the UK house hunters will stay home, potentially having a chilling effect on the market.

Estate agent Jeremy Leaf said: ‘The housing market recovery has been hit by a double whammy of the virus and falling markets. 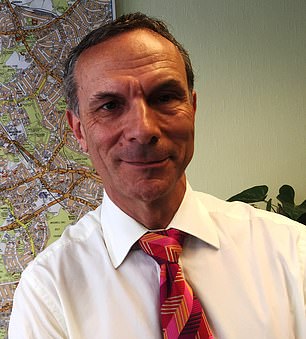 ‘The recent rise in sales, prices and mortgage approval numbers was unlikely to be maintained even by a giveaway Budget and cuts in already rock-bottom interest rates.

‘Our viewings are down by about 25 per cent on what we might expect at this time of year although there is no real sign of previously-agreed sales collapsing although mortgage deals may need to be renegotiated.

‘The extension of the affordable homes programme, lower lending rates for social housing and release of monies from the housing infrastructure fund are all welcome but it is disappointing that there was no action to improve the relatively low level of transactions.

‘In particular, apart from the 2 per cent surcharge on non-UK property buyers from next year, there was no action on stamp duty.

‘An opportunity was missed to improve accessibility to the market for first-time buyers and downsizers who are causing a log jam at the top and bottom of the market. This would have improved activity, which is good for the whole economy.’

What will happen to house prices in 2020?

The new decade may have started with a renewed sense of optimism in the property market but dramatic rises in house prices are unlikely, experts have warned.

Instead, economists have mostly forecast a steady 2 per cent rise in annual average property prices over the course of the year.

Lawrence Bowles, of estate agents Savills, experts prices to rise by just 1 per cent over the course of the year. 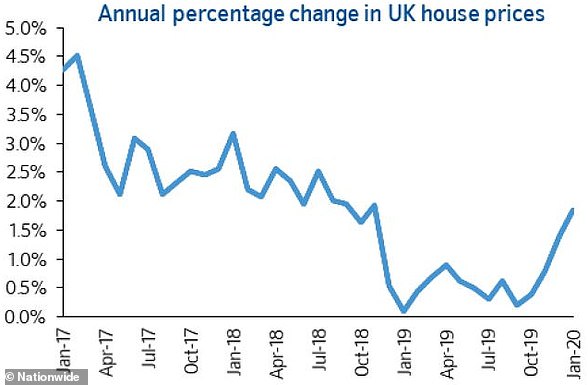 Broken down by region, Savills expects the North West and Yorkshire to have the fastest house price growth over the next five years.

This is partly because house prices in these regions didn’t recover as quickly as in the South following the financial crash, meaning there is more room for growth.

The Royal Institution of Chartered Surveyors was slightly more optimistic about the potential for national average growth over the next year, forecasting a rise of 2 per cent.

Rightmove also predicted that the average price tag on a home will increase by 2 per cent over the next year, with northern regions performing more strongly than those further south.