Home-hunters buying a property with a leasehold

When hunting for a flat, buyers will almost certainly be looking at leasehold properties – but may not understand what that means and whether it matters how long the lease lasts.

Essentially, owning an apartment on a leasehold basis means you own the property, and the right to live in it, for a set period of time. But the land it stands on is owned by a freeholder or landlord. When that fixed term expires, ownership of the property reverts back to the freeholder. Flats are usually sold on a leasehold basis to simplify who owns and is responsible for the shared parts of the building.

If you own a freehold property, on the other hand, you have outright ownership of both the property and the land on which it stands. Traditionally, most houses were sold on a freehold basis but the past few years have seen thousands of new-build houses sold as leaseholds.

Home-hunters need to understand the keys when buying a leasehold

Following a backlash from homeowners who were being asked to pay huge sums to extend leases, the Government has proposed a ban on new-build houses being sold as leasehold.

But the current situation means both flat and house-buyers need to be aware of how leasehold works and the costs involved.

Here are five steps to a carefree leasehold purchase.

THE length of a lease is one of the most important factors as it directly affects the property’s value. Residential leases can be for up to 999 years initially although some are as short as 125 years. Leaseholders have a statutory right to extend their lease, but it can be a complicated and expensive process.

Jordan Page, of law firm Hart Brown, says: ‘Whilst the majority of leasehold properties are sold with decades left to run, once the lease drops below 80 years the cost of extending it starts to rise rapidly. It also becomes harder for potential buyers to be granted a mortgage. Unfortunately, it is rare for the lease length to be quoted in estate agents’ sales particulars or for agents to fully explain its importance to potential buyers.’

Flat-buyers can be blinded into thinking that one flat has the same value as another just because they look the same, according to Charles Oliver, associate director at Caxtons Chartered Surveyors.

He says: ‘The one they are buying may have a short 60-year lease while the flat they are comparing it with has a lease that has been extended by 90 years to 150 years with no ground rent.’

BUYERS unclear about who owns the freehold can check the Land Registry website for £3. You may find the freehold is owned by an investment company or large-scale landlord.

Some flats are sold with ‘share of freehold’. This usually means a separate company owns the freehold and each leaseholder owns a share in that company. This can be an efficient way to manage a block of flats, as the leaseholders – or shareholders – will be in control of the management and maintenance of the building.

The enfranchisement process gives leaseholders the right to buy their freehold once they have owned their property for two years. Flat-owners will need to club together while house- owners can proceed on an individual basis. Professional advice is vital.

FLAT-DWELLERS must make an annual payment to the freeholder called ground rent. Traditionally this was ‘peppercorn’ and as little as £1 a year. But the past few years have seen developers start to draft leases with higher initial ground rent that also increases regularly.

The most onerous clauses in new-build leases see the rent double every ten years for 50 years. This means an initial ground rent of £295 will rise to £9,440 in 50 years’ time.

Rebecca Lloyd, of Setfords Solicitors, says: ‘Many are linked to the Retail Price Index and while at the moment this is low, what happens in years when this is high? This could make leasehold ground rents unaffordable.’

Spiralling ground rents have led to a backlash from owners who have accused homebuilders of creating an asset class at their expense. Income from ground rent makes freeholds attractive to investors and will impact the price if the leaseholder wants to buy the freehold to their home.

LEASEHOLDERS who own flats pay service charges for the maintenance of the building and its common parts. But it is the freeholder or managing agent who will decide what work needs doing.

Before buying a leasehold, check for any upcoming service charges and who the freeholder and managing agent are. Be wary of any agent or freeholder who has made regular appearances at the First Tier Tribunal, also known as property chamber.

If you buy a house on a private estate you may be required to pay service or maintenance charges for common areas such as verges or playgrounds.

Leaseholders in blocks of flats should check for any forthcoming ‘major works’ bills. These might be for a new roof or decoration of the property’s communal parts. For leaseholders, this can mean bills of tens of thousands of pounds. 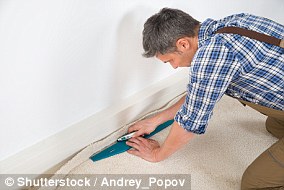 Some leases state fees will be charged for changing carpets

The lease sets out the rights and responsibilities of both the leaseholder and freeholder. Some leases ban satellite dishes while others ban subletting without consent.

Karen Jenkins, of law firm Druces LLP, says: ‘Pet owners should check a lease for any restrictions, for example.’

Leases often prohibit alterations to a property without the landlord’s consent – which the leaseholder will need to pay to obtain.

Most leases do not specify the fees, leaving freeholders free to charge what they want – sometimes thousands of pounds. These have upset many leaseholders who bought houses from developers and later are charged just to add a conservatory, remortgage, sell the property – even change the carpets. The fees may also be written into the deeds of a property as ‘covenants’.

These may remain in place when a property is sold or the freehold purchased, meaning homeowners could still be required to pay a developer for consent for various things even if they buy the freehold to their home.

Paula Higgins, chief executive of the Homeowners Alliance, says covenants seem to simply line the pockets of the developer. She says: ‘The common argument of protecting neighbours does not hold water in many cases. Why would you need permission to change carpets? It is just another way developers have figured out to fleece owners.’