The Home Office will send out one million text messages in the coming days in a bid to make sure no British passport holder is left stranded by a No Deal Brexit.

Passport rules will become tighter for travel to most European countries if the UK splits from Brussels without an agreement on October 31.

Priti Patel, the Home Secretary, wants people to check to see if their passports will meet the stricter validity rules so they can still travel in the immediate aftermath of the Halloween deadline.

The text messages will stress the importance of checking to make sure passports meet the new criteria, especially if someone intends on travelling to the continent in November and beyond.

There are two main rules which passports will have to comply with.

Firstly, every passport will have to have at least six months of validity left before the stated expiry date in order for people to be allowed to travel.

The second rule applies to people who renewed their old passport before it expired and they were given ‘extra months’ of validity as a result.

In that scenario, any ‘extra months’ on a passport over 10 years old will likely not be allowed to count towards the six months needed under the first rule. 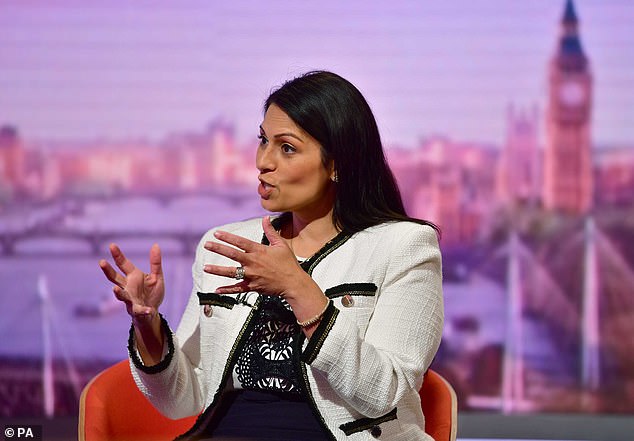 Priti Patel, pictured on the Andrew Marr Show yesterday, and the Home Office are sending one million text messages to urge people to make sure their passports meet the new rules

The new rules will apply to travel to and from most countries in Europe including: Austria, Belgium, Croatia, Greece, Italy, Holland, Portugal, Spain and Sweden.

But the new rules do not apply to people who are travelling from the UK to Ireland.

Boris Johnson has promised to deliver Brexit by October 31 ‘do or die’ and with or without a deal.

However, his preference remains for the UK to split from Brussels with an agreement.

The text messages will be sent out to people who provided a mobile number when they applied for a passport or applied for an existing passport to be renewed.

However, not everyone provides a mobile number when submitting their application so ministers are urging all passport holders to check their documents even if they do not receive the message.

There are now just 45 days until the Brexit deadline.

That means anyone who needs to act as a result of the six month rule will need to do so quickly to ensure they are able to travel to Europe after October 31 if there is a disorderly split.

Passport renewal normally takes up to three weeks but it can take much longer than that depending on the circumstances and levels of demand.

The text messages are put of the government’s £100 million ‘Get Ready for Brexit’ advertising campaign.

The campaign got underway at the start of September as the government launched a new Brexit preparedness website.

It will also feature social media messages and billboard advertisements across the country.

Michael Gove, the minister in charge of No Deal preparations, said getting ready for a disorderly divorce from the EU was a ‘shared responsibility’.