Home ownership among young people has nearly HALVED since the 1980s

Home ownership among young people has almost halved since its peak in the 1980s, as the majority of 25 to 34-year-olds don’t earn enough and don’t have sufficient savings, a report shows.

It means 1.3million young people who would have owned a home in 1989 do not own one today, according to a report by left-leaning think tank the Resolution Foundation which was funded by Lloyds Bank.

The majority of young people want to buy, but can’t afford it, according to a new report

The report also said that 80 per cent of 25 to 34-year-olds lacked the earnings or savings to buy a typical first-time buyer property in their region.

The situation may also have worsened since the sample was taken pre-pandemic.

Nationwide said last week that a 20 per cent deposit on a home now costs the equivalent of 110 per cent of the mean, pre-tax annual earnings of a full-time adult worker, up from 102 per cent a year before.

And according to lender Aldermore, first-time buyers have been forced to find, on average, an extra £23,000 to purchase a home since the start of the pandemic, thanks to runaway house price increases.

The biggest falls in home ownership were among those groups who were already less likely to be property owners, the Resolution Foundation said. 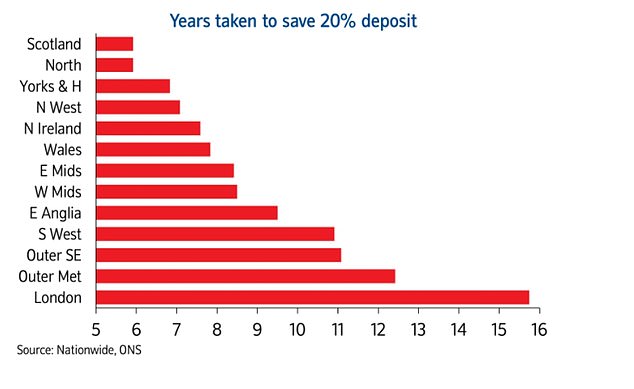 Buyers in Scotland and the North could save a 20% deposit for a home in six years, while those in London could face a wait of 16 years. In the South West, it takes almost 11 years 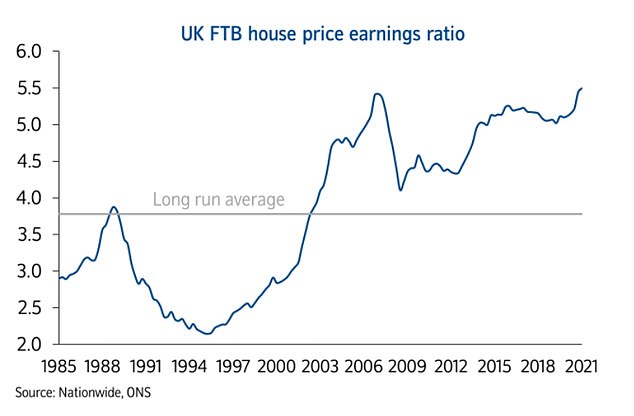 Proportional prices: Today, an average home costs 5.5 times the typical first-time buyer’s salary – but 25 years ago that figure was as low as 2.1 times the annual income

In addition, only 12 per cent of low-income households with adults in that age group owned a home, down from 26 per cent in 1989; while black people in the same bracket have seen their rate of home ownership more than halve, from 19 per cent in 1989 to 8 per cent today.

The report also refuted claims that young people are less keen to own a home than they were in the past.

It said that four in five renters would still prefer to own a home.

For most with low to middle incomes it is not possible to pay rent, pay into a pension, repay student loan debt, put money aside for rainy day savings – and save for a deposit on a first home

‘Hope to Buy’ report by think tank the Resolution Foundation

Of those that did have the resources to buy, only 4 per cent had decided not to do so.

The think tank also said that shifts in demographics, such as increasing numbers of full-time students, immigrants and single young people, accounted for only 13 per cent of the drop in home ownership.

The report reads: ‘The widening gap between those aspiring to become first-time buyers and those actually securing this aim presents a growing challenge for policy-makers.

‘This matters because home ownership delivers positive outcomes such as improved physical and mental health and youth and community outcomes, particularly among lower-income households – largely due to the security, stability and financial resilience afforded to those who own their home.’

‘Home ownership is also overwhelmingly what young people want. But for most with low to middle incomes it is just not possible to pay rent, pay into a pension, repay student loan debt, put money aside for rainy day savings, and at the same time save for a deposit on a first home.’

The Resolution Foundation found that, of those who had been able to buy, 28 per cent of first-time buyers in England had help from family or friends, and 6 per cent used an inheritance. 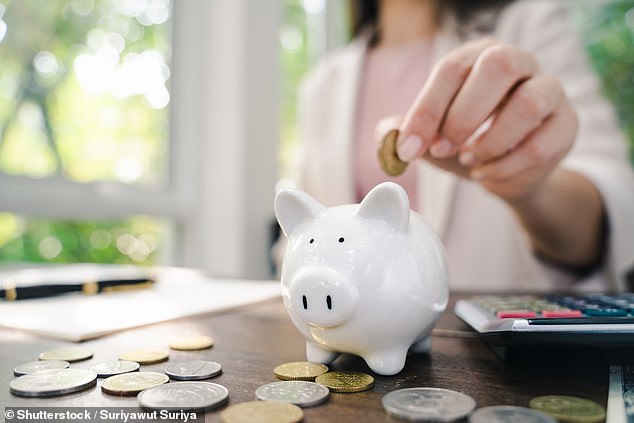 The Resolution Foundation said home ownership was important for lower-income households, because it offered ‘security, stability and financial resilience’

A further 15 per cent used a Help to Buy equity loan.

The chief executive of the Resolution Foundation is former Labour adviser Torsten Bell, and its executive chairman is former Conservative minister, David Willetts.

Adam Corlett, principal economist at the Resolution Foundation, said: ‘Youth home ownership has been falling sharply in every part of the UK over the past three decades, and today just four per cent of young non-home owners have both sufficient earnings and savings to afford a typical house where they live.

‘Too many young people are having to rely on windfalls from others, or pooling resources with a partner, to get closer to owning.

‘These options simply aren’t available for everyone, and more needs to be done to deliver on the Prime Minister’s promise to ‘turn generation rent into generation buy’.

Andrew Asaam, mortgage director at Lloyds Banking Group, added: ‘We hope the research findings will provoke debate and discussion about how we can collectively deliver the high-quality, sustainable and affordable homes that Britain needs to prosper.’

The figures calculated in the report assume buyers require a 10 per cent deposit and can access a mortgage of 4.5 times the combined earnings of the household.