Criminals are exploiting the coronavirus lockdown with fraudsters using the crisis to con Britons out of £1.8 million, Priti Patel has warned.

Ms Patel, who has largely been absent from the government’s public response to the health emergency, also warned that paedophiles are seeking to exploit the fact that children are increasingly going online to meet friends and do school lessons on their computers.

She warned that while total crime had dropped as people follow the advice to stay at home, criminals were adapting to exploit the pandemic.

‘The perpetrators of sickening online child abuse are seeking to exploit the fact that more and more young people and children are at home and online.

‘And in the last week the National Domestic Abuse Helpline reported a 120 per cent increase in the number of calls it received in one 24-hour period.’

Today’s death toll is a drop from yesterday’s 980 deaths, which remains the highest recorded in a single day so far and even surpassed Italy and Spain’s worst days.

But it does put Britain on course to hit the grim 10,000-death milestone on Easter Sunday, which the country will spend in lockdown.

Criminals are exploiting the coronavirus lockdown with fraudsters using the crisis to con Britons out of £1.8 million, Priti Patel (pictured) has warned 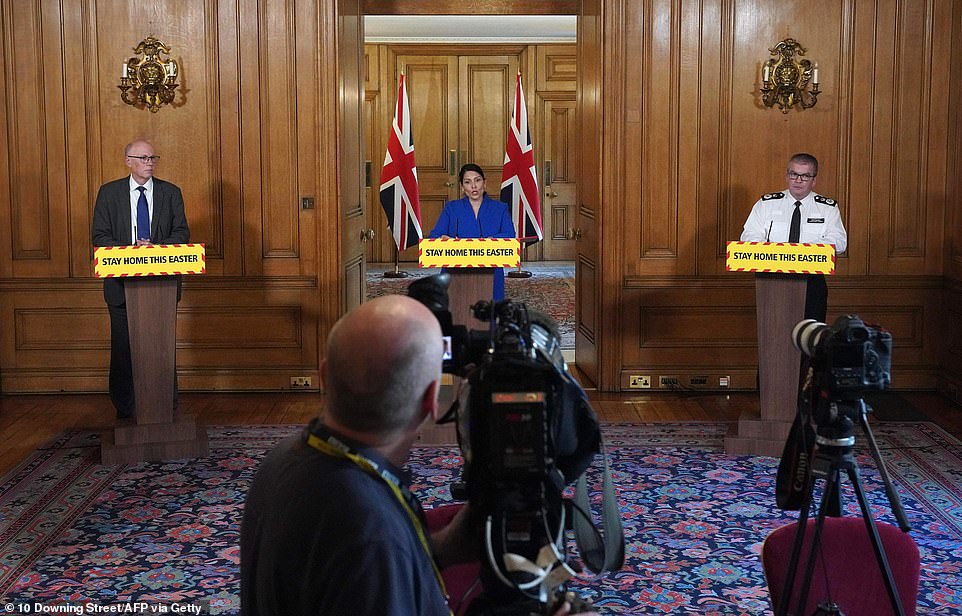 A graph released at the briefing showed the number of people in hospital beds in different areas of the country. The largest number is seen in London

Ms Patel said talks are ongoing to provide charities and the Domestic Abuse Commissioner with an additional £2 million to bolster domestic abuse helplines and online support.

Ms Patel was joined at the briefing by Chair of the National Police Chief’s Council Martin Hewitt who confirmed that 400 domestic abuse suspects were arrested in the West Midlands in just two weeks.

The Home secretary said people who are suffering from domestic abuse during the lockdown will still be able to get support from the police. 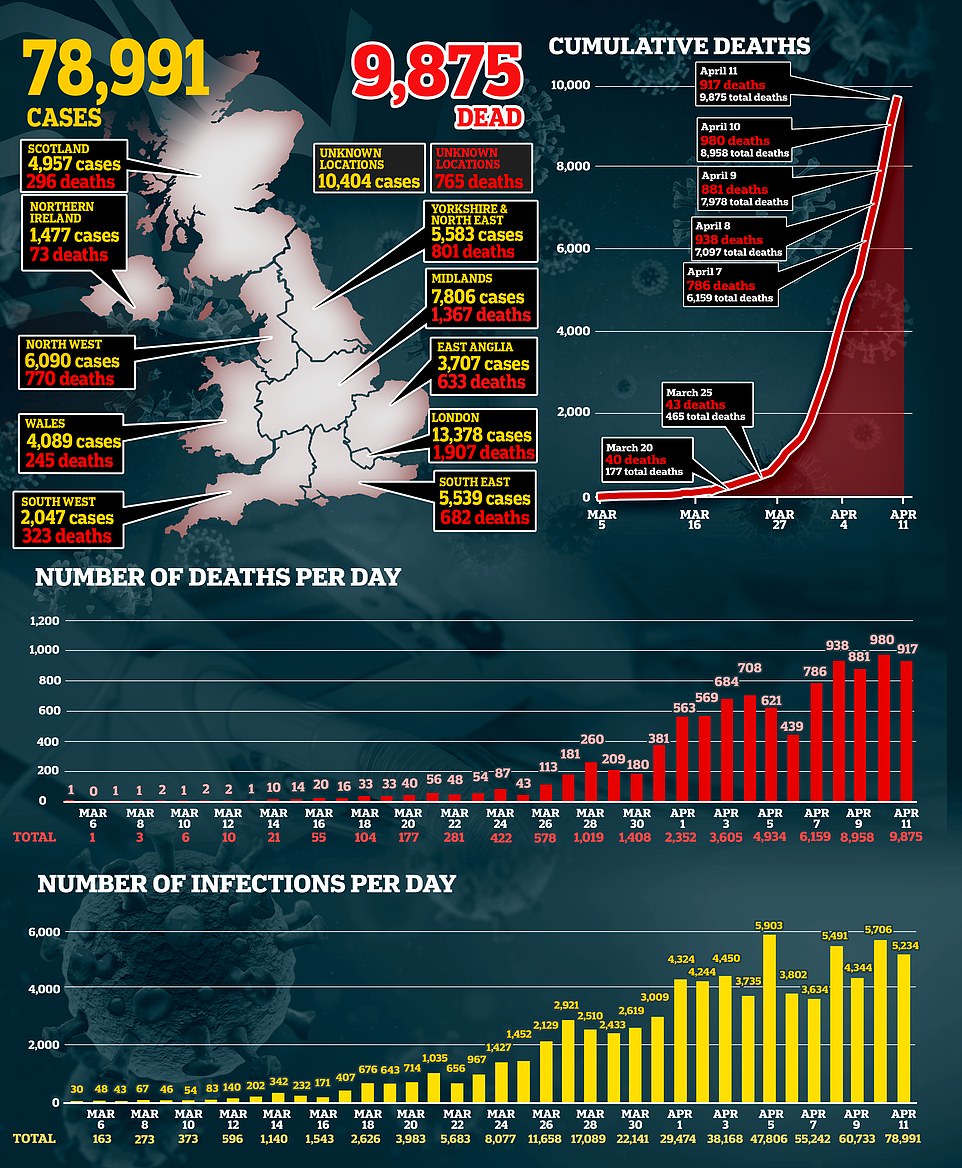 She said: ‘For the victims of these crimes, home is not the safe haven that it should be and that is why I have been working with law enforcement, charities, schools, businesses and local councils to address this changing threat picture.’

She added: ‘Our outstanding police will still be there for you.’

With Britons following lockdown guidelines and largely staying indoors, Mr Hewitt said forces up and down the country had seen a 21 per cent fall in overall crime in the last four weeks compared to the same period last year.

Mr Hewitt said that officers were still working to tackle crime such as drug smuggling and fraud.

He added: ‘Initial figures from all forces show a 21 per cent fall in overall crime.

‘That drop, combined with the commitment of our over 200,000 officers and staff across the UK, the fantastic response from our volunteer special constables, means that we are in a strong position.’ 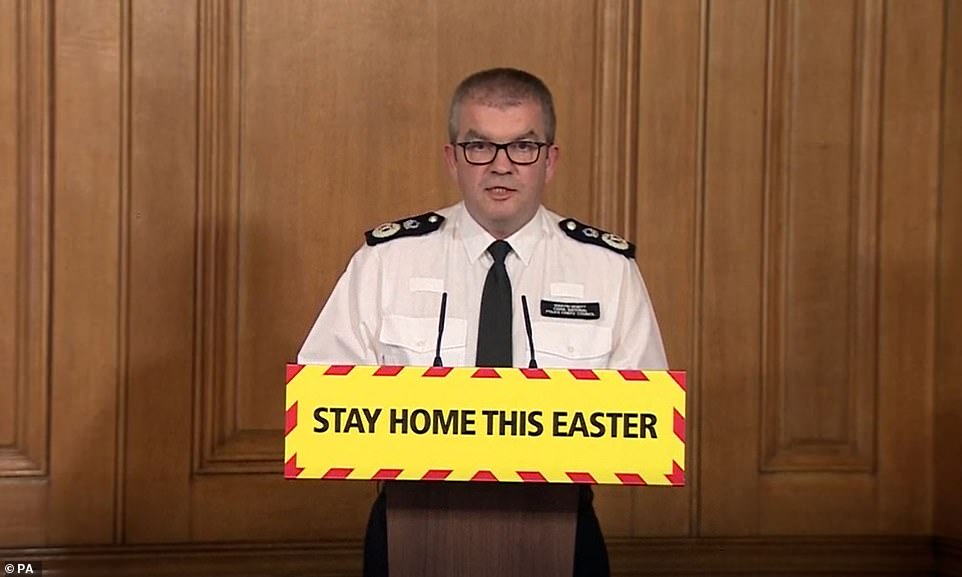 NHS England reported a further 823 patients had died in their hospitals in the past 24 hours – the youngest was 11 and the eldest was 102, both with underlying health problems.

The rise in deaths came as police told Britons to remain indoors on a warm Easter bank holiday weekend, but were forced to have words with some flouting social distancing rules in the nation’s parks.

In her first interview since the outbreak began, Patel slapped down overzealous police forces after they threatened to check people’s shopping for ‘non-essential’ items and set up road blocks to grill motorists on whether their trips are legitimate. 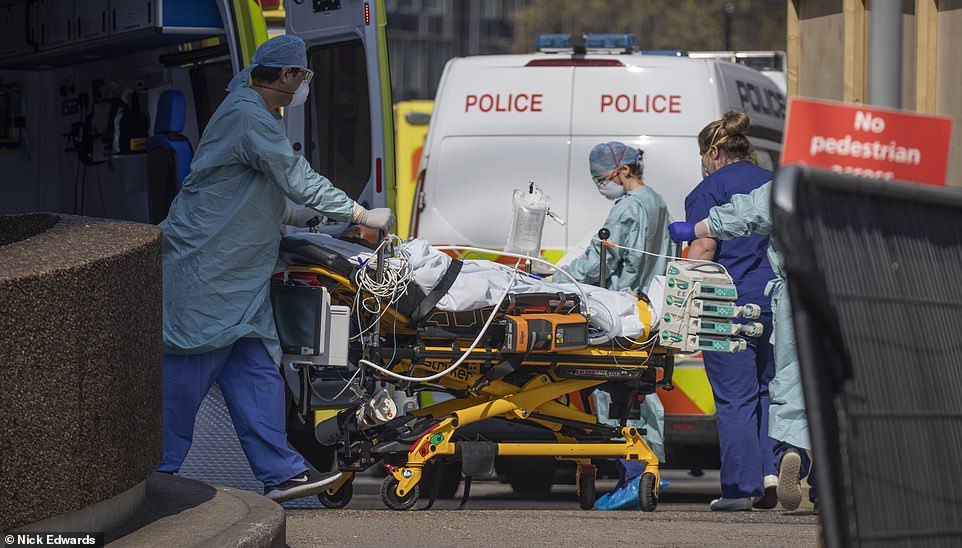 On another grim day in Britain’s coronavirus epidemic: 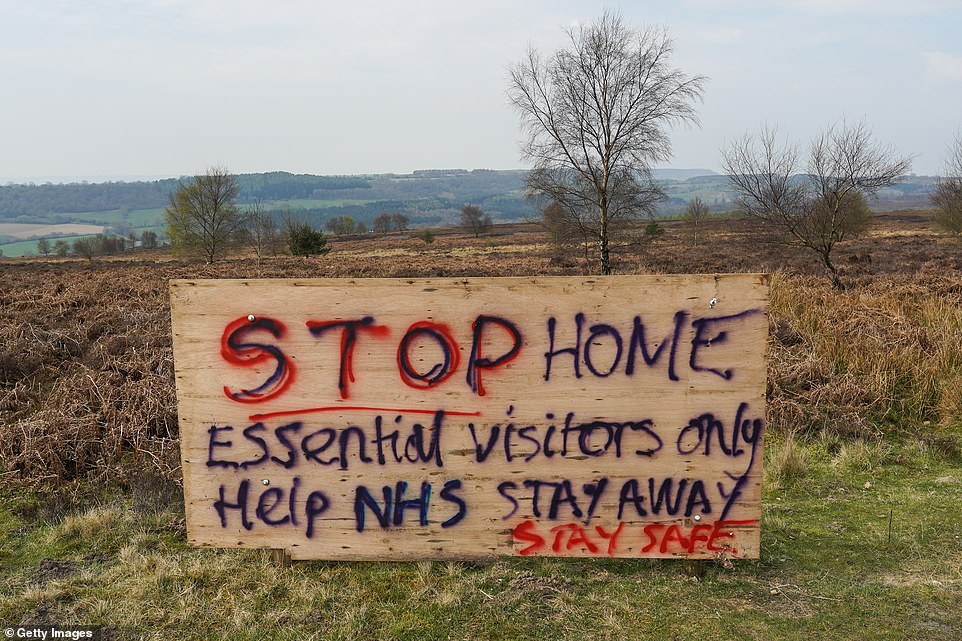 Hancock repeats claims of PPE over use 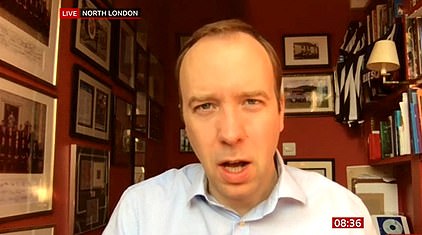 A row has erupted between the government and nurses after Matt Hancock again cautioned coronavirus medics against overusing personal protective equipment.

The Health Secretary insisted there was enough protective clothing to meet demand, but urged health workers to treat the gear like a ‘precious’ resource.

His remarks, made this morning in a broadcast round, doubled down on comments made at yesterday’s Downing Street press briefing where he responded to reports from the frontline of a dire shortage of equipment.

Royal College of Nursing general secretary Dame Donna Kinnair said that no amount of PPE was ‘more precious a resource than a healthcare worker’s life, a nurse’s life, a doctor’s life’.

Health Secretary Matt Hancock this morning pleaded with the public to avoid going outside as the nation enters the critical period in the epidemic.

He said it is not clear if the UK has reached the peak of its outbreak, but acknowledged that hospital admissions were flattening.

He told BBC Radio 4’s Today programme: ‘The good news is we have seen the number of hospital admissions starting – starting, I stress – to flatten out.

‘You can see (from the Government’s charts) that instead of going up exponentially, as they would have done if we had not taken the measures, that they are starting to come down and flatten.

‘We haven’t seen that enough to have confidence to make changes.

‘The answer to your question, about have we reached the peak, is nobody knows.’

Reacting to today’s figures, Dr Simon Clarke, associate professor in cellular microbiology at the University of Reading, said: ‘The news of a further 917 COVID19 deaths is very sad, but unsurprising.

‘The fact that an 11-year-old was amongst the victims is particularly distressing.

‘Only two weeks ago we saw the UK pass the threshold of 1,000 total deaths and we can expect that number to breach 10,000 tomorrow.

‘It has become increasingly clear that younger people and those without underlying health conditions are at greater risk than had initially been expected, so it’s essential that people observe social distancing rules in order to start to halt the spread of the coronavirus.’

Of the 9,875 who have sadly lost their lives, the Health Secretary this morning revealed that 19 had been NHS workers.

Mr Hancock said: ‘My heart goes out to their families, these are people who have put themselves on the front line.

‘The work is going on to establish whether they caught coronavirus in the line of duty while at work or whether, like so many other people, caught it in the rest of their lives.

‘It is obviously quite difficult to work that out. What matters is we pay tribute to their service.’ 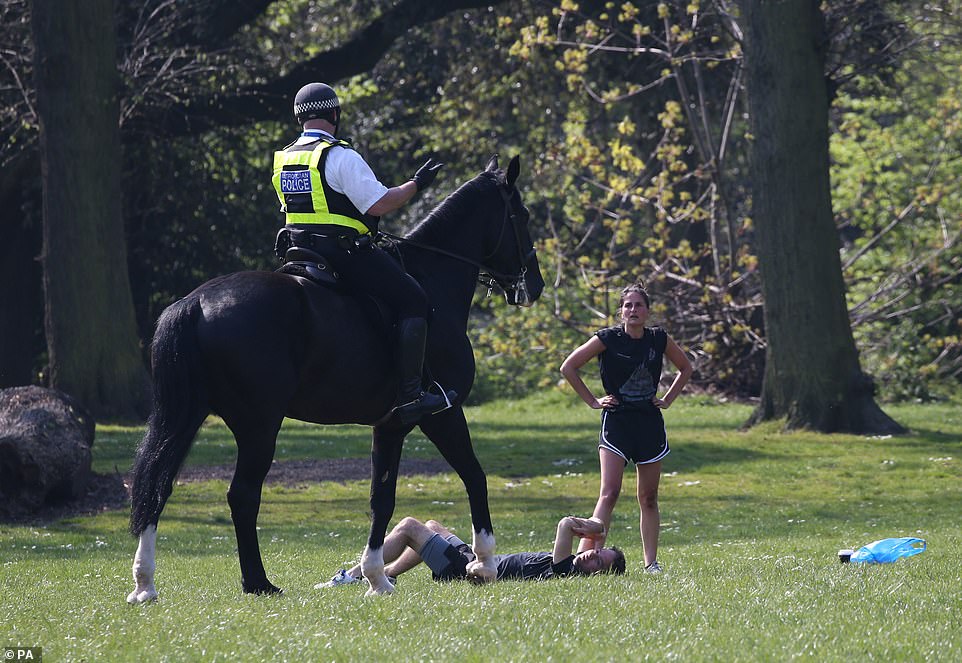 A police officer on a horse talks to sunbathers in Victoria Park, London, as Britons continue to bask in the glorious Easter sunshine 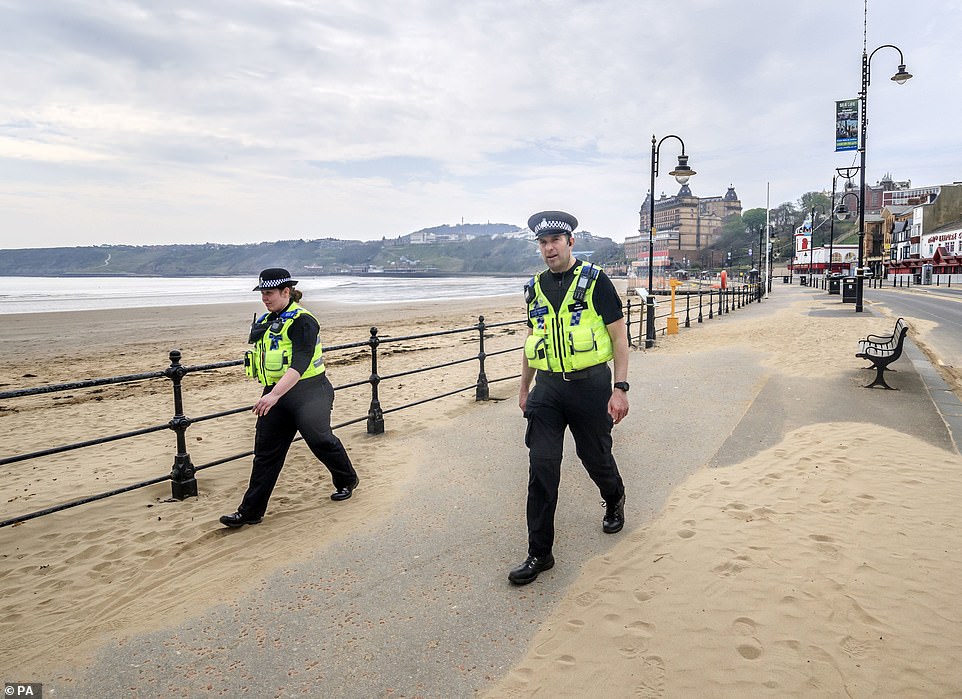 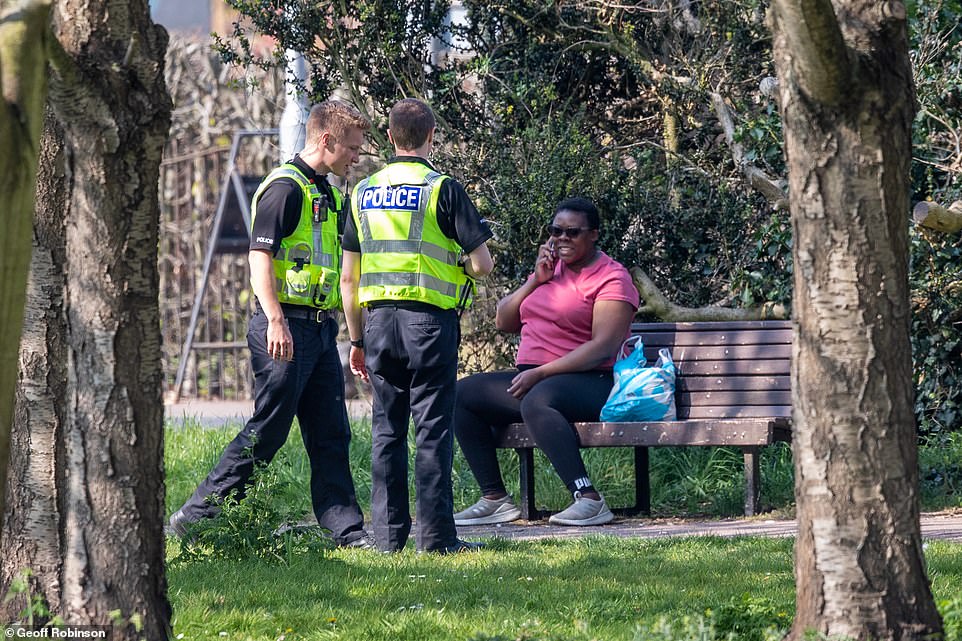 In Cambridge, police officers spoke to a woman sat on a bench in a park as forces across the country cracked down on people disregarding lockdown rules 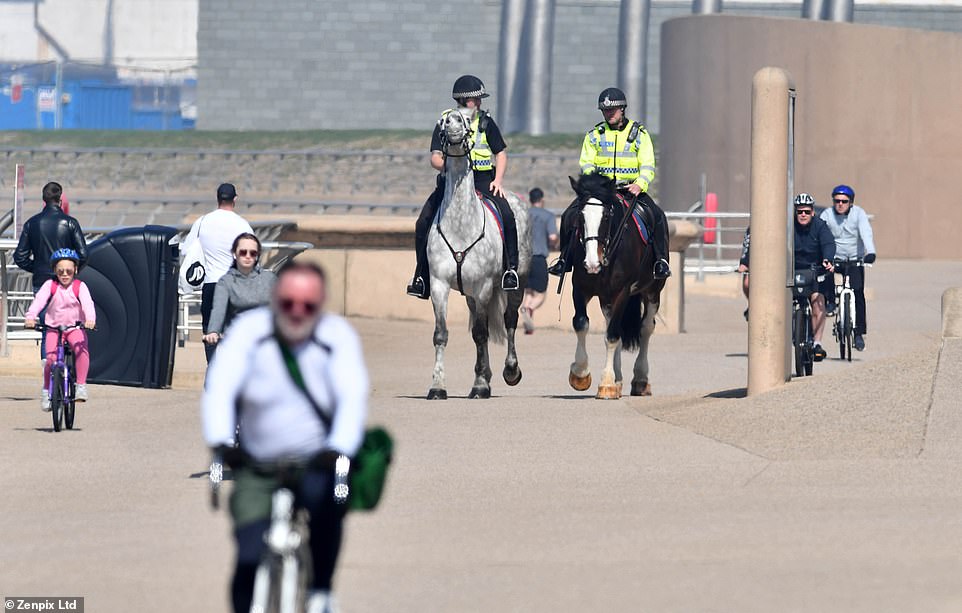 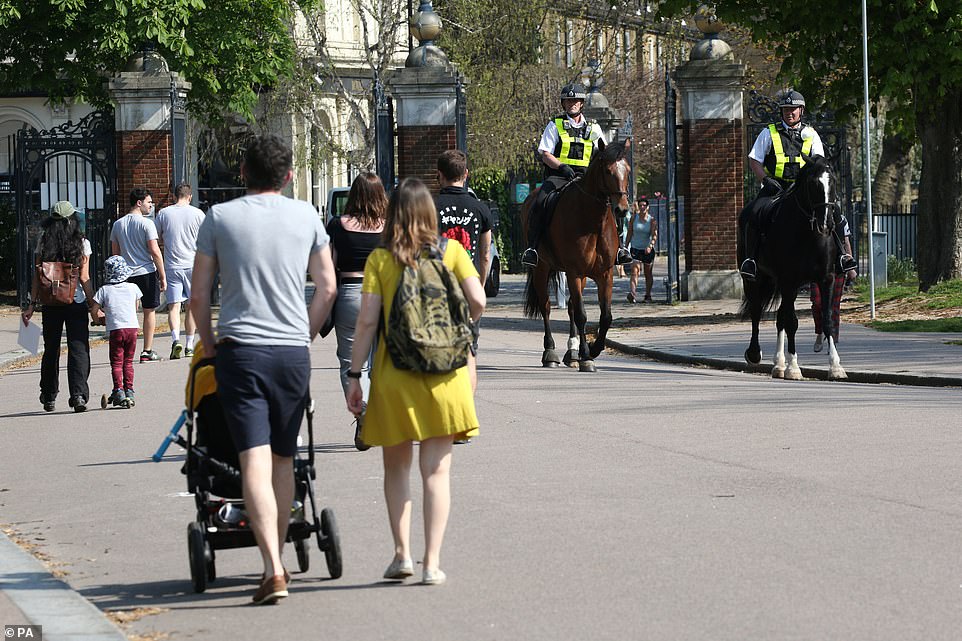 Mr Hancock today became embroiled in a row after he responded to claims of a personal protective equipment shortage by urging medics not to overuse the gear.

Royal College of Nursing general secretary Dame Donna Kinnair also said that no amount of PPE was ‘more precious a resource than a healthcare worker’s life, a nurse’s life, a doctor’s life’.

UK braced for 18 months of restrictions

Normal life will stay on hold until a virus vaccine becomes available in about 18 months, officials said last night.

Advice to work from home and stay in for seven days if you have symptoms will probably still be in place next year.

Ministers want to lift the most restrictive parts of the lockdown, including school and shop closures, within weeks.

But senior Government sources say the only true ‘exit strategy’ is a vaccine or a cure. Until then, the UK will have to adjust to a ‘new normal’.

An official last night told The Telegraph that social distancing measures that have been placed upon Britons could be ‘indefinite’.

Official plans to encourage social distancing on a long term, voluntary basis, have also been discussed, as the government continues to hold talks on how long Britons can cope with the current measures. Some measures, such as remote working, could be left in place for longer.

Reports have emerged from the front line of health workers forced to treat patients in homemade protective gear made from bin bags and curtains.

He added: ‘It is quite frankly insulting to imply frontline staff are wasting PPE. There are horrific stories of NHS staff and care workers not having the equipment they need to keep them safe. The Government must act to ensure supplies are delivered.’

At yesterday’s Number 10 update, Mr Hancock assured that there is sufficient stock of face masks, gowns and gloves but admitted distributing them was proving a ‘Herculean logistical effort’.

This afternoon will mark the first time the Home Secretary will front one of the daily Downing Street briefings.

Before his hospitalisation, Boris Johnson was front and centre of the country’s war on the virus, but is currently recovering in St Thomas’ Hospital after leaving intensive care. 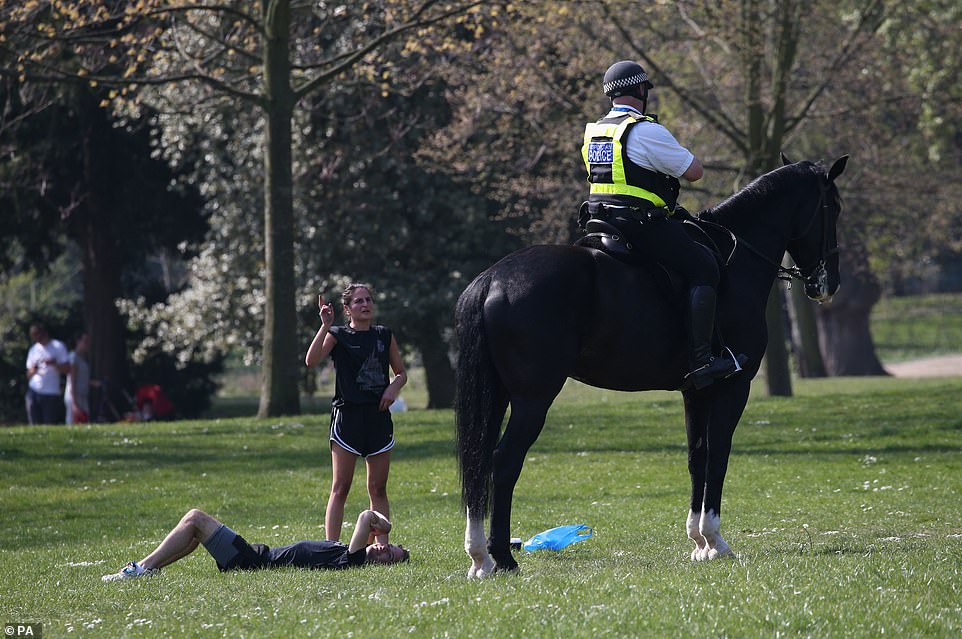 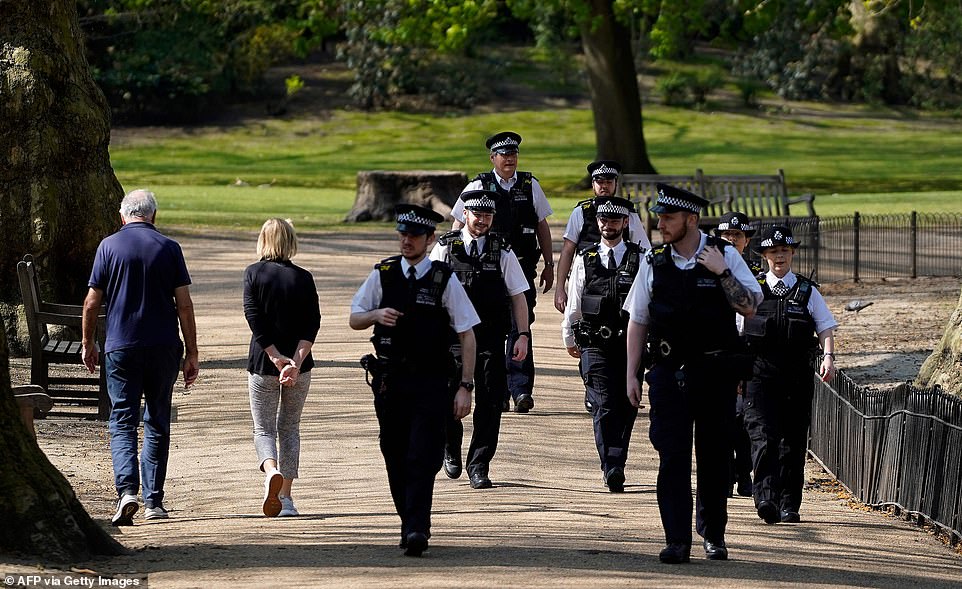