By Wires and David Martosko, U.s. Political Editor For Dailymail.com

The Department of Homeland Security on Thursday announced a major change in immigration policy, saying it would send non-Mexican immigrants back south of the border while their asylum requests are processed.

Mexico’s government said that it would accept some of them for humanitarian reasons, in what many will see as a concession to President Donald Trump’s administration.

‘Aliens trying to game the system to get into our country illegally will no longer be able to disappear into the United States, where many skip their court dates,’ Homeland Security Secretary Kirstjen Nielsen said in a statement.

‘Instead, they will wait for an immigration court decision while they are in Mexico.’ 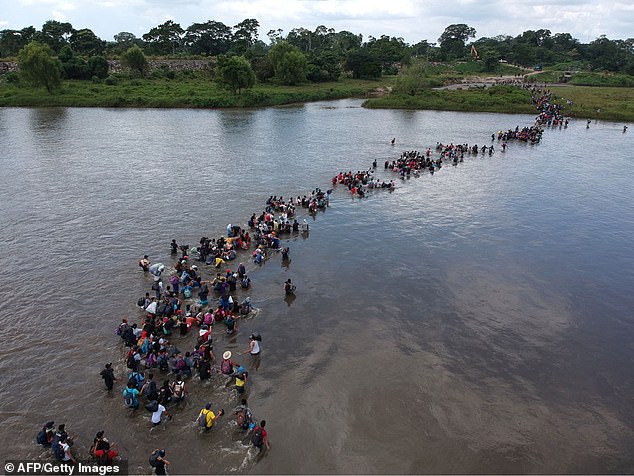 In this November 2018 photo, a stream of Salvadoran migrants are pictured hearing to the U.S. through Mexico; many eventually claimed asylum when they reached American soil

The Immigration and Naturalization Act includes a mechanism to force asylum-seekers to await decisions in Mexico. Using it could prompt new court challenges, however.

A federal judge quickly issued a temporary restraining order last month against the administration’s last attempt to manage a flood of asylum-seekers, ruling that the government can’t automatically deny asylum to people who enter the U.S. between official border crossings.

That order expired on Wednesday.

Separately, a federal judge on Wednesday blocked administration policies that prevented immigrants who suffered gang violence or domestic abuse in their home countries from being considered political refugees who can make asylum claims.

Judge Emmet Sullivan declared that some of the guidance that then-Attorney General Jeff Sessions issued this year cannot be used to determine whether an immigrant has a credible fear of persecution or torture in their home countries, the first step to making an asylum claim in the U.S.

In response to Thursday’s announcement, Mexico’s foreign ministry underscored that it still has the right to admit or reject the entry of foreigners into its own territory.

‘Mexico’s government has decided to take the following actions to benefit migrants, in particular unaccompanied and accompanied minors, and to protect the rights of those who want to start an asylum process in the United States.’

The ministry said the actions taken by the Mexican and U.S. governments do not constitute a ‘safe third country’ scheme, where migrants would have to request U.S. asylum while in Mexico.

Trump tweeted on Nov. 24 that migrants at the border would stay in Mexico until their asylum claims were individually approved in U.S. courts.

The arrival of several thousand Central Americans in Mexico’s border city of Tijuana about a month ago prompted Trump to mobilize the U.S. military to beef up border security, while restricting the number of asylum applications accepted per day. 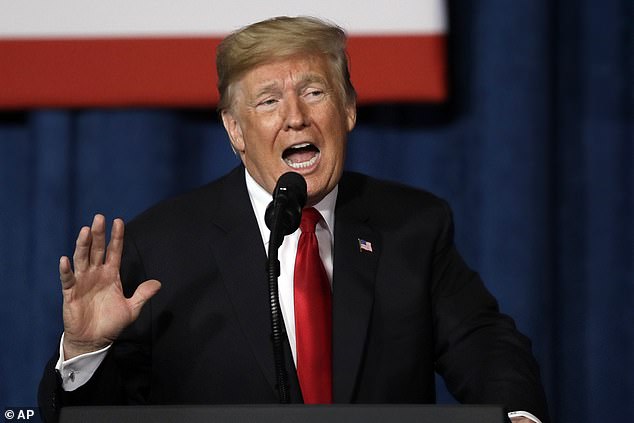 President Donald Trump has long been an opponent of loopholes in the U.S. immigration system that allow immigrants to enter the U.S. without documentation, knowing they’ll be released into the interior of the country while asylum claims are adjudicated

Illegal crossings at the southern border have dropped dramatically since the late 1970s, but in recent years applications for asylum have ballooned and more Central American families and unaccompanied children are migrating to the United States.

When they request asylum, the U.S. is forced to review their cases. Those can take months or years to process and, in the meantime, the immigrants are released.

But in recent weeks, courts have accepted lawsuits challenging the legality of that order and have blocked officials from implementing it.

Nielsen said Thursday’s decision will reduce illegal migration ‘by removing one of the key incentives that encourages people from taking the dangerous journey to the United States in the first place.’

‘This will also allow us to focus more attention on those who are actually fleeing persecution.’

The section of U.S. law that Nielsen is relying on specifies that ‘aliens’ who arrive ‘from a foreign territory contiguous to the United States’ can be sent back with an order from the U.S. attorney general.