The Department of Homeland Security has warned that the United States could see a shortage of generic pharmaceutical drugs if the coronavirus outbreak continues.

According to the report, obtained by ABC News, the department said the country is already seeing shortages of more than 200 drugs and medical supplies due to strains caused by international shutdowns during the pandemic.

Officials concluded that if the outbreak forces another round of widespread shutdowns, many US-based pharmaceutical companies would be ‘unable to quickly offset’.

‘Chinese factories that produce raw ingredients for common antibiotics closed for weeks as of March and India’s lockdown extended until the end of May,’ the report said.

According to officials, ‘France, Germany, and China have also considered re-imposing lockdown measures as COVID-19 cases have begun to re-emerge’.

The report was released as US officials scramble to curb the virus in big states like Texas, Arizona and Florida, where thousands of new cases are reported daily.

Rural states are also seeing surges of infections, including in Kansas.

The coronavirus resurgence in the US has drawn concern from abroad. The European Union seems almost certain to bar Americans from traveling to the bloc in the short term as it draws up new travel rules to be announced soon.

The surges of infections prompted Vice President Mike Pence to call off campaign events in Florida and Arizona, though he will still travel to those states and to Texas this week to meet with their Republican governors.

Those three governors have come under criticism for aggressively reopening their economies after virus-related lockdowns despite increasing infections in their states. 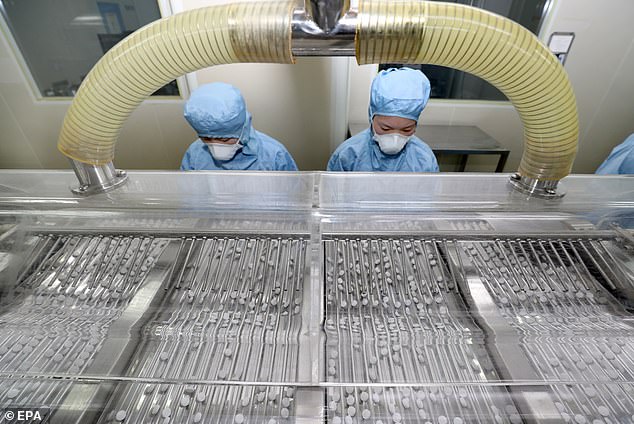 According to the report, the department said the country is already seeing shortages of more than 200 drugs and medical supplies due to strains caused by international shutdowns during the pandemic. Employees are seen at a pharmaceutical company in Nantong City, China

After confirmed daily infections in the US surged to an all-time high of 40,000 on Friday, Texas and Florida reversed course and closed down bars again.

Globally, confirmed COVID-19 cases have passed the 10 million mark and confirmed deaths neared half a million, according to a tally by the Johns Hopkins University, with the US, Brazil, Russia and India having the most cases.

The US has borne the brunt of the global outbreak, recording more than 2.5 million confirmed cases, followed by 1.3 million in Brazil and 633,000 in Russia.

The US also has the highest virus death toll in the world at over 125,000.

Experts say all those figures significantly undercount the true toll of the pandemic, due to limited testing and missed mild cases.

US government experts last week estimated the US alone could have had 10 million cases.

MILLIONS MORE PEOPLE COULD DIE IN GLOBAL SECOND WAVE OF COVID-19, WHO WARNS

Millions of people across the world could die if there is a second wave of coronavirus infections, the World Health Organisation warned on Friday.

Dr Ranieri Guerra, an assistant director-general for strategic initiatives at the WHO, said the pandemic had so far spread as health officials had anticipated.

Comparing COVID-19 to the Spanish Flu outbreak more than 100 years ago, Guerra said the older pandemic ‘fiercely resumed’ in September and October – when temperatures were cooler – after a dip.

He told Italy’s Rai TV: ‘The comparison is with the Spanish Flu, which behaved exactly like Covid: it went down in the summer and fiercely resumed in September and October, creating 50 million deaths during the second wave.’

His warning was echoed by European Central Bank chief Christine Lagarde, who said on Friday that ‘of course there could a severe second wave if we learn anything from the Spanish Flu of 1918-19’.

The Spanish Flu outbreak ravaged numerous countries around the world, including Britain, where there were more than 220,000 deaths and the US, where 675,000 died.

The virus first appeared in the spring of 1918 but appears to have mutated when it surged again in the fall, making for a deadlier second wave.

It was made worse by the fact it struck as the First World War was coming to an end.

‘It came back roaring and was much worse,’ epidemiologist Dr. William Hanage of Harvard University’s T.H. Chan School of Public Health said.