Rough sleepers on cardboard mattresses and tents, accused of begging and pick pocketing, have been cleared by police from the affluent district of Mayfair.

Men, women and children in makeshift camps in the shadow of Marble Arch, Mayfair, were ordered to move by officers from private Transport for London land last week.

However the campers, thought to be Romanians and Bulgarians, moved their cardboard homes across to nearby Park Lane.

Shopping trolleys were piled with pots and pans, a broomstick, an accordion and a 32-inch plasma television, which a Romanian named Dan planned to sell ‘for a few hundred pounds’, according to The Telegraph.

Dan said he did not want to return to Romania and was living with no money, no job and no food.

Transport for London said the court order was a last resort after attempts to offer alternative accommodation proved unsuccessful.

During the early morning of Thursday, raid police officers overlooked the site to  ensure there were no cases of modern slavery, which included people held against their will.

However those living in the ‘tent city’ have resisted deportation thanks to a High Court ruling made in 2017.

The Home Office policy states that the deportation of rough sleepers who are EU citizens is unlawful and broke freedom of movement rules. 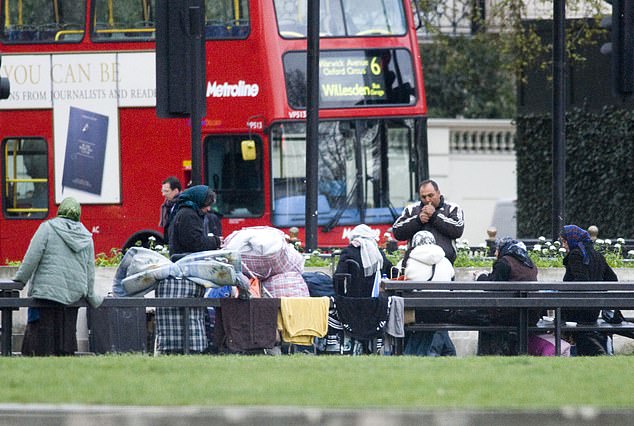 Romanian immigrants set up camp at Marble Arch, London, before the Olympics in 2012 (file image)

Shocking figures published by the Metropolitan Police state that 872 crimes of a violent or sexual nature were reported in the 12 months to July – a rate of more than two a day.

Thefts including shoplifiting were at a rate equivalent of more than 80 cases a week and a robbery was committed in the area every day.

This is in contrast to Hackney Central, east London, an area once associated with crime, which reported 493 violent and sexual offences.

However Westminster council say comparison of the two is unfair given the central location of Mayfair.

Westminster Conservative councillor Ian Adams has warned against blaming the Romanian and Bulgarian rough sleepers for the rise in crime.

Mr Adams said: ‘The council very much recognises and shares the concerns of residents and businesses … around current levels of crime whether that is theft, robbery or other crimes.

‘Mayfair is increasingly becoming a magnet for the nighttime economy. It attracts a lot of wealthy people who are being targeted because of the expensive jewellery they are wearing.’