Police in Key West, Florida, have arrested a homeless couple after a woman allegedly caught them having drunken sex in her yard.

Stephen James Dean, 36, and Teresa Behan, 49, were taken into custody on Monday evening and booked into the county jail on misdemeanor counts of trespassing and indecent exposure.

Behan was also charged with battery on an officer and resisting an officer with violence, both felonies, after allegedly kicking a cop in the groin and punching him. 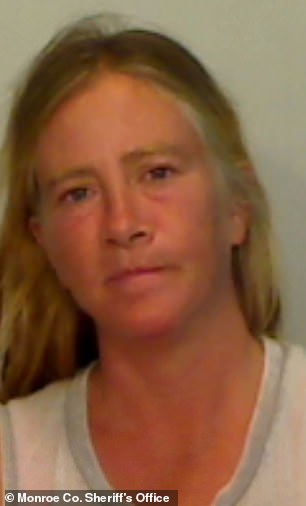 Stephen James, 36, was arrested and charged after he was allegedly found having ‘drunken’ sex in a Key West yard. Theresa Behan, 49, was also arrested and additionally charged with attacking an officer

According to police, they got a 911 call at around 5pm from a local resident saying that she had heard someone arguing outside her home on Margaret Street, reported The Smoking Gun.

When the 52-year-old woman went to check the source of the commotion, the homeowner said she found Dean and Behan having sex against a barrier wall.

Officers who responded to the scene found the lovers stretched out in the yard.

The cops noted that the pair smelled of alcohol and appeared intoxicated.

‘The two could not put together a complete sentence and were slurring words,’ according to an arrest report. 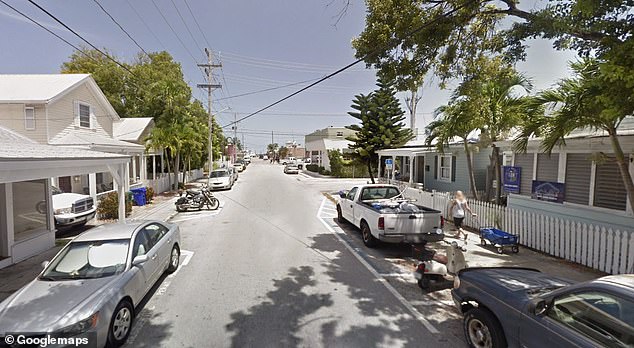 The pair was discovered against a wall in a yard of Margaret Street in Key West, Florida

When asked by the officers what they were doing on the woman’s property, Behan reportedly claimed that ‘James’ was her ‘music promoter’ and that he lived there.

Unprompted, Dean blurted out that he and Behan were having sex in the yard, according to police.

The amorous pair, describing in an arrest report as homeless, are due back in court for their arraignment on October 11.