Homeless couple sleep on fly-tipped mattress in middle of road

A photograph of a homeless couple sleeping on a dirty mattress in the middle of a residential road has sparked a mixed reaction from residents.

The picture, taken over the weekend, shows two people asleep on the floor near some garages in South Ockendon, Essex.

The image was circulated on social media, prompting a barrage of comments.

While some offered their sympathies to the couple and urged everyone to ‘take care of each other’, others were angry that the situation was unfolding outside their homes and accused them of being ‘junkies who beg and steal’.

The picture, taken over the weekend, shows two people asleep on the floor in the middle of the road in South Ockendon, Essex

The man who took the image, who wants to remain anonymous, said: ‘On Sunday, my partner went to the Co-op on South Road and came back to say that someone had fly-tipped a mattress.

‘I went to my garage there and couldn’t believe what I saw. I was gobsmacked. They are in such a vulnerable place. I went over and woke the man up and said, ‘Mate, you’re sleeping in a road. Get yourself somewhere safe’.

‘He said ‘Yeah, OK’ and went back to sleep. I feel sorry for them, they are in a bad place. He was so withdrawn.’

The witness said they were in their late 20s, and looked as though they were on drugs, a problem which his area is all too familiar with.

‘I’ve lived here 16 years and it’s got worse,’ he said. ‘We are right on the edge of the village and you get a lot of drug deals going on.

‘It’s a forgotten area. Our local Co-op was held up on Friday night, and I’ve been threatened with a knife before.’

Another resident said: ‘I’m split on it. I don’t want it outside my house, no one does.

‘They are still human beings and deserve to be somewhere dry and warm. If I thought I could trust them I would unlock my shed and they could stay in there.

‘It’s not nice to see people on the street but you don’t want it outside your front door.

‘All it takes is for someone who’s had too much to drink down the working man’s club to get in their car and make a wrong move and they could have been seriously hurt.’ 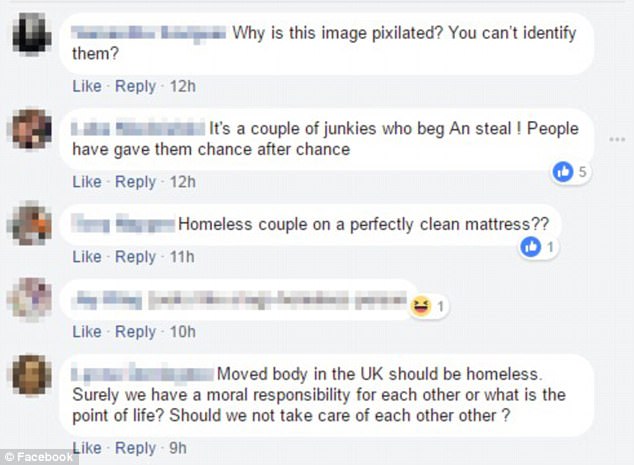 The incident has split opinion, with Facebook users claiming the couple might be on drugs while others say society has a ‘moral responsibility’ to look after them

The picture has also split opinion on social media with some claiming the couple could be ‘drug users’ and others arguing more should be done to help them.

Writing on Facebook, one user said: ‘It’s a couple of junkies who beg An (sic) steal! People have gave them chance after chance.’

But another responded: ‘Nobody in the UK should be homeless. Surely we have a moral responsibility for each other or what is the point of life?

‘Should we not take care of each other other?’

When a mattress starts being placed in the middle of a Road (sic), we know we are heading for a huge homeless Crisis (sic), #endhomelessness Now!!!!’